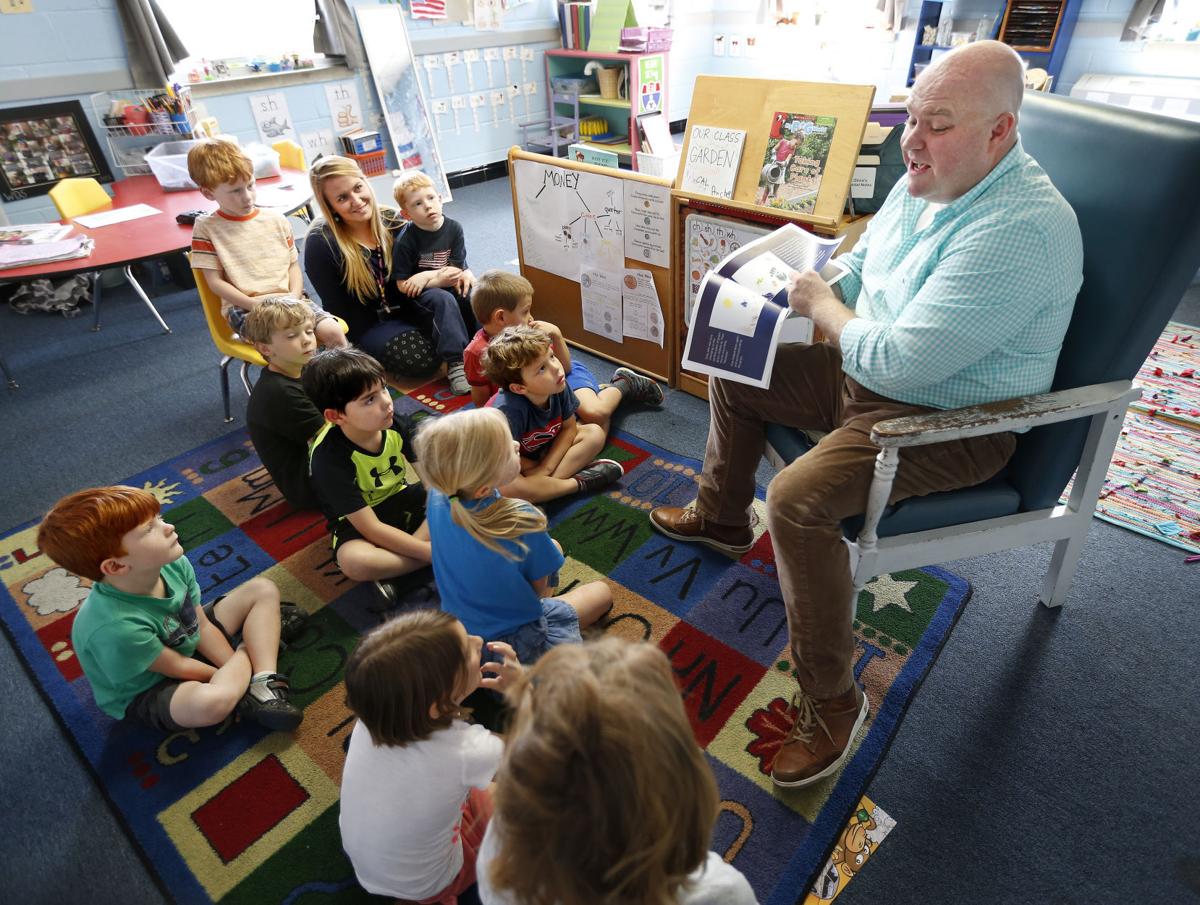 Mike Ward reads “A Mouse on the Moon” to his son Nolan’s class at Westhampton Day School. Ward wrote the book, and the pupils drew pictures to illustrate it. 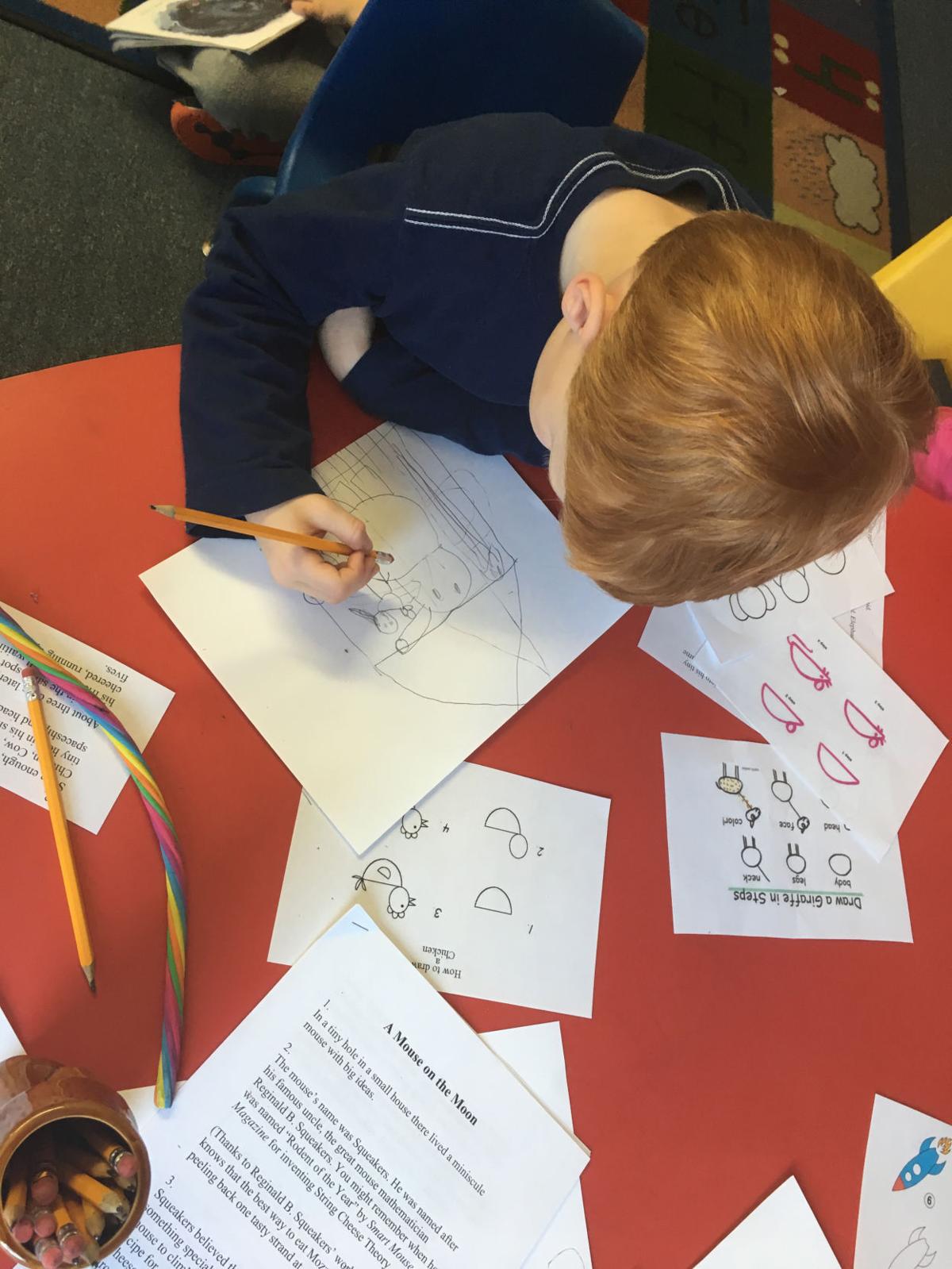 Nolan Ward works on an illustration for “A Mouse on the Moon,” the book his father, Mike Ward, created for a kindergarten class at Westhampton Day School.

We may never know who kicked, bumped, yanked or pulled the cheap metal toilet-paper holder off the wall of our bathroom. It’s a Ward family cold case flush with conspiracy theories.

One day we all awoke to a crumbled drywall, a lonely metal cylinder and lots of shrugged shoulders. And then there was the hole, a window into our home’s guts that intrigued my son but drove me crazy as each week passed without me finding the time or YouTube video to fix it properly.

In place of a patch kit, I offered up a story about a mouse named Squeakers. He lived in the hole, passing his time hunting for cheese and collecting empty Febreze bottles.

And so my gaggle of fictional characters squatting in our tiny Lakeside bungalow grew. Squeakers was the angel on my son Nolan’s shoulder — an always curious and often confused rodent who wanted to do the right thing. On the other shoulder was Chicken, who shacked up in the attic plotting overly complicated heists to nab all the lollipops at our bank or barbershop. They were joined by Cow, Hammerhead the Shark and Rodney the Rooster.

This is the backstory to our main story, a slightly overzealous experiment in which I performed “Mystery Reader” duties for my son’s kindergarten class.

You know the drill: Dad or Mom uses a lunch break to read a classic story to his or her kid’s class. (Bonus points are awarded for using funny voices.) I thought it would be more fun to show up without a book, and instead work with his class to create one. His school, Westhampton Day School, and teacher, Miss Olivia, were totally game for the project.

We just needed a story. So I cast Squeakers in the lead role, and an hour later, I penned my first children’s book, “A Mouse on the Moon.”

I couldn’t wait to visit Nolan’s class with some notes and chicken scratches to watch them create all the artwork that would bring the tale to life. But I was a little anxious. I had written my share of short-sighted, sophomoric and immature articles through the years, but never intentionally for an audience of, well, kids.

When I walked into the same classroom I hurried into every morning to drop off my son, I was immediately put at ease. Even if the story was a dud, the kids would be fine. Miss Olivia had a plan.

As a fledgling youth sports coach, I totally got it. You can’t be successful teaching young minds anything without carefully imagining every possible outcome, and carefully mapping out the best way to get there. By the time I arrived, the kids already knew the book cold, the story of a proud mouse living in the shadow of his famous uncle. A mouse who was going to do what NASA hasn’t been able to accomplish since TV dinners and house-sized home computers were considered high-tech: fly to the moon.

Not only that, but they also were divided into groups and assigned pages to tackle with pencils, crayons and markers.

It was awesome to watch. One boy managed to weave every random detail of his single page into his drawing. Others meticulously studied the helpful “how-to” instructions provided by Miss Olivia to guide their little hands through the motions of drawing a mouse, chicken and cow. And a few begged to draw a second illustration, totally dedicating their tired fingers to bringing Squeakers and company to life.

I left with a pile of inspired drawings that were more than I could ever have hoped for. And as I struggled to find the time and resources to turn this collection of words and pictures into something resembling a book over the next few weeks, I was greeted by antsy kids during my daily morning drop-offs.

“Nolan’s dad, is the book almost done?” they would ask, with slightly less patience each passing day.

Finally, the books were done, one for each of the contributors. With my sketchy layout skills and production quality that more resembled a corporate quarterly report than a true book, I was again nervous it wouldn’t live up to their expectations.

After all, we’re talking about children’s books, the original “on” switches for kids’ creative thinking. Reading stories together in that magical nighttime ritual is brain food for kids, stoking their imaginations in exciting new directions and leaving indelible imprints recalled decades later.

I couldn’t help but think of the masters of this craft, such as Bill Peet, the late author, illustrator and Disney animator whose deft rhymes and detailed prose made “Big Bad Bruce” and “Kermit the Hermit” regular bedtime favorites. Then there was Shel Silverstein, whose “The Giving Tree” is still impossible to get through without my lip quivering, eyes tearing up or voice slipping into falsetto. You would think the story was about dicing dozens of onions, and not a sparsely illustrated, deeply metaphorical tree.

“A Mouse on the Moon” had a hopeful message, that and generously spread cheesy puns. And when I returned to the kindergarten class with the completed work, the kids ate it up.

As we sat and read through the finished product, they excitedly shot their hands up when they recognized their handiwork. I’m already thinking about a follow-up, maybe a “Menagerie on the Moon” so Squeakers’ friends can join him. But these kids are published now, and they’re likely to demand more than a free copy and some string cheese. I’ll see if Chicken can find some lollipops …

Mike Ward is a writer, brand strategist and sometimes stand-up comic. He shares his Lakeside bungalow with his wife and two kids. Contact him at mward@milepost0creative.com or follow him on Twitter @Mile0Creative.

Summer Brown, 25, a graduate of Midlothian High School and emerging actress, had her first major TV audition over the summer.

The coronavirus hasn’t stopped Tacky Lights season from starting this weekend, although it is dimming the lights a little.

Mike Ward reads “A Mouse on the Moon” to his son Nolan’s class at Westhampton Day School. Ward wrote the book, and the pupils drew pictures to illustrate it.

Nolan Ward works on an illustration for “A Mouse on the Moon,” the book his father, Mike Ward, created for a kindergarten class at Westhampton Day School.