Fans stand at attention during the singing of the national anthem on Thursday at Yankee Stadium in New York. The team was allowed to operate at 20% capacity, something the players said they appreciated given the atmosphere it provided. When the game began, a new rule putting a runner on second base in extra innings was used, and led to the Blue Jays spoiling New York’s home opener. 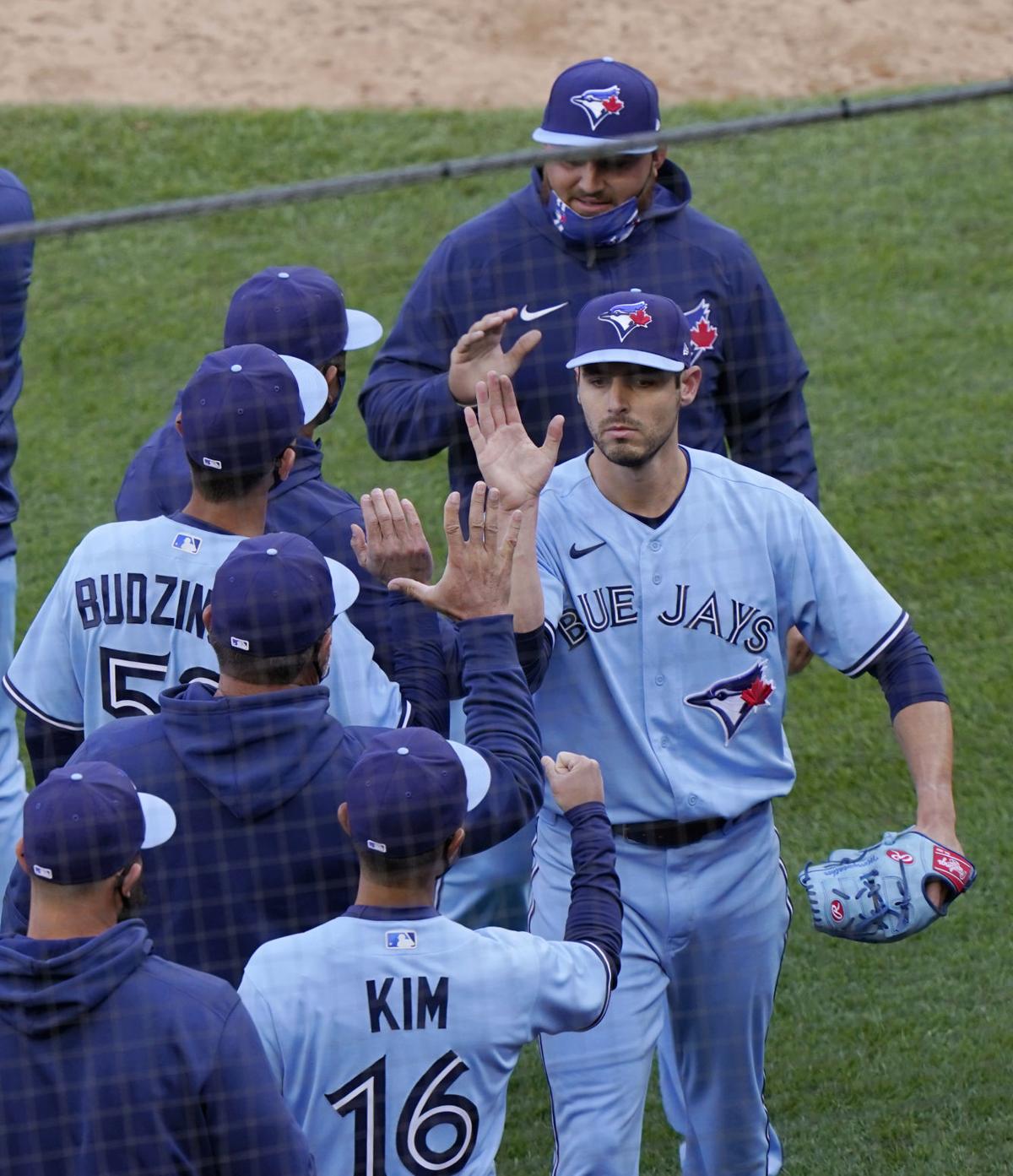 NEW YORK — Julian Merryweather had to get used to fans in the stands, having debuted last summer in an empty ballpark. He was surprised the 10th inning started with a runner on second.

No matter. The Toronto Blue Jays turned Yankee Stadium as silent as it was during a 2020 season played without fans.

Randal Grichuk led off the 10th with an RBI double, Merryweather struck out the side on 11 pitches in the bottom half, and the Blue Jays took advantage of the second year of a COVID-era rule starting starting extra innings with a runner on to beat New York 3-2 Thursday in the major league opener.

“It was definitely weird,” Merryweather said. “I asked a few people: What are all these people doing here? Who are these people? But it was great to have fans again.. ... the moment itself, being in Yankee Stadium was pretty surreal. That’s like Little League dreams right there.”

Merryweather felt energy from the fans. But he didn’t realize the runner on second in extras rule returned until bullpen coach Matt Buschmann told him.

“I forgot,” Merryweather recalled. “Oh God, there’s going to be a runner on second.”

He fanned Aaron Hicks and Giancarlo Stanton on three pitches each, started Gleyber Torres with two strikes, then threw a ball and got a foul before getting him to swing past a 99 mph offering.

Teoscar Hernández tied the score in the sixth inning with a 437-foot homer on a hanging slider from Yankees ace Gerrit Cole, whose parents were in the crowd to watch him in person in at Yankee Stadium for the first time with New York.

“I just want that slider back,” said Cole, who slapped his glove against the bench four times after he came out.

Fans had not been at Yankee Stadium for 532 days since the loss to Houston in Game 5 of the AL Championship Series on Oct. 18, 2019. They had to show proof of complete vaccination at least two weeks earlier or a recent negative COVID-19 test. Masks were required, and groups were separated by empty seats into pods.

“Obviously it didn’t end the way you want to where you’re shaking hands, but it definitely was special having a crowd back,’” Yankees manager Aaron Boone said. “Even though we’re 20% capacity, you could feel their energy and feel them waiting to erupt.”

Attendance was announced as 10,850. Before its first homestand at its spring training ballpark in Dunedin, Fla. Toronto plays Monday in the home opener of Texas, the only big league ballpark allowed 100% capacity at the season’s start.

“That’s going to be exciting because we all are going to feel normal playing the game that we love,” Hernández said. “Getting fans back on the field as it was three, four years ago, it makes us really good because the game is going back to normal.”

A reduced group of Bleacher Creatures shouted the Roll Call from the right-field seats in the top of the first, and first baseman Jay Bruce raised his right arm in a spirited response. Cole turned to the bleachers to survey the scene when Biggio’s foul ball provided a momentary break.

“Having that buzz, having the energy back in the Stadium was something special,” Judge said. “I was talking with a couple guys, talking with the umpires, everybody missed it. Those fans, that energy, that makes the game.”

NEWARK, N.J. — The Washington Capitals came up with two Great 8s against the New Jersey Devils.

NASCAR feverishly tried to save its ballyhooed first Cup Series dirt race since 1970 from turning into a disaster, the likes not seen since the 2008 tire debacle at Indianapolis made for one of the worst events in sport history.

Fans stand at attention during the singing of the national anthem on Thursday at Yankee Stadium in New York. The team was allowed to operate at 20% capacity, something the players said they appreciated given the atmosphere it provided. When the game began, a new rule putting a runner on second base in extra innings was used, and led to the Blue Jays spoiling New York’s home opener.