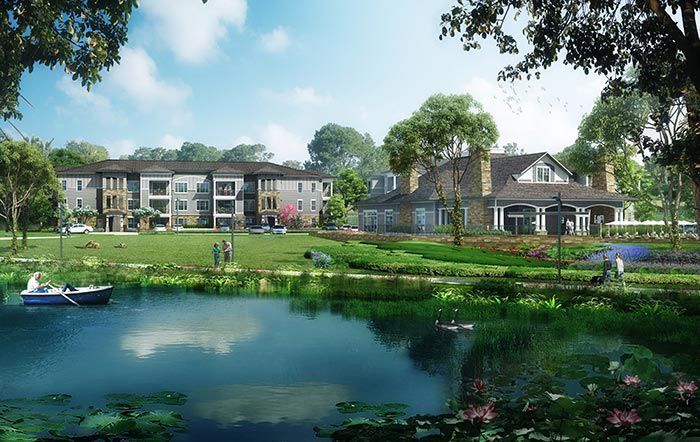 Dominion Realty Partners is currently building the first phase of the Boulders Lakeside Apartments, a $47.6 million project with 248 units in Chesterfield County. About 50 of the units are now open.

The second phase calls for 220 units across six apartment buildings.

A developer is proposing to construct six apartment buildings in the Boulders office park in Chesterfield County. 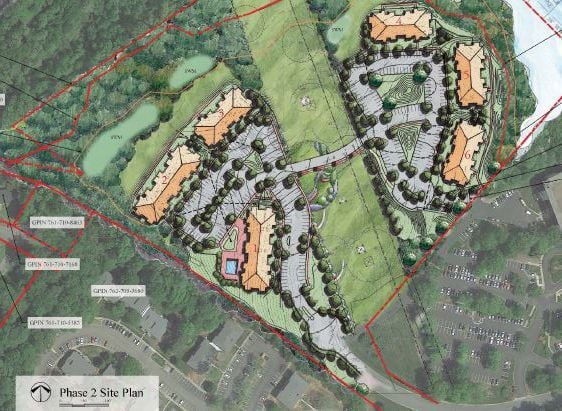 Dominion Realty Partners is proposing to build 220 apartments at the end of Boulder Springs Drive in eastern Chesterfield County.

A proposal to build 220 more apartments at the Boulders office park in Chesterfield County was given the seal of approval by planning commissioners this week.

The Chesterfield Planning Commission unanimously recommended Tuesday night that county supervisors approve Dominion Realty Partners’ rezoning request to allow for the apartments to be built at the end of Boulder Springs Drive on roughly 27 acres of wooded land east of the Powhite Parkway.

The new $42 million apartment complex would be located just southwest of the Boulders Lakeside Apartments, a $47.6 million project with 248 units that Dominion Realty Partners is currently building. That project was the first phase of the developer’s plans to build apartments in the office park.

The first 50 units at Boulders Lakeside Apartments are now open and move-in ready, with the rest of the apartments expected to be finished by November, said Michael Campbell, president of Dominion Realty Partners.

The second phase with the additional 220 units on Boulder Springs Drive calls for a clubhouse, pool, trails and open spaces. The second phase of the apartment community would have six buildings that are three and four stories high.

The two phases of Boulders Lakeside Apartments will provide residents easy access to other parts of the Richmond region, Campbell said, noting that the apartments are near the Chippenham Parkway and the Powhite Parkway as well as HCA Healthcare’s Johnston Willis and Chippenham hospitals.

Dominion Realty Partners has developed other multifamily projects in the region, including the Residences at the John Marshall in downtown Richmond as well as Manchester Place (now known as Link Apartments) in South Richmond.

The Chesterfield planning staff had recommended denying the rezoning request for the second phase of Boulders Lakeside Apartments proposal, saying that they had safety concerns because the proposal does not call for having at least two public road access points into the new community, a typical zoning requirement for multifamily communities with more than 200 units. The proposal instead calls for one public road access into the apartment campus from Boulder Springs Drive as well as a secondary gated emergency-only access.

Jim Theobald, an attorney for the developer, told commissioners that the second gated access still provides a way for emergency responders to get to the apartment community.

“The fact that it’s not technically a public road I don’t think gets in the way of public safety,” he said.

Frank Petroski, the planning commissioner representing the Midlothian district, said creating a second public road access would cause a bigger safety concern because that would mean the developer would have to connect into a neighboring residential cul-de-sac, which Petroski said would end up generating more traffic through that cul-de-sac.

“I just want to clarify it’s still going to have two roads, but the second one will be restricted access for emergencies only,” Petroski said before making the motion to recommend approving he plan.

The Chesterfield Board of Supervisors has the final say on whether to approve the rezoning proposal. The board is expected to consider the plan at its Sept. 23 meeting, Theobald said.

Theobald had urged commissioners to approve the plans, noting the site rests in an opportunity zone. That zone was created by a 2017 federal law that rewards investors with tax breaks for putting money earned from other investments back into businesses or real estate projects in opportunity zones located in more than 8,700 census tracts around the nation.

“This undeveloped site, owned by [Principal Development Investors, LLC], has been on the market for almost 40 years without any takers,” Theobald said.

Editor's Note: This story has been updated to correct the owners of the undeveloped Chesterfield County site.

Even during the COVID-19 economic downturn, some small business owners say they struggle to find workers

Businessman David Bender says his lawn care service has come through the COVID-19 pandemic so far in pretty good shape, if only he could find …

Getting to know: Cheryl Groce-Wright with Kaleidoscope Collaborative RVA

Dominion Realty Partners is currently building the first phase of the Boulders Lakeside Apartments, a $47.6 million project with 248 units in Chesterfield County. About 50 of the units are now open.

The second phase calls for 220 units across six apartment buildings.

A developer is proposing to construct six apartment buildings in the Boulders office park in Chesterfield County.

Dominion Realty Partners is proposing to build 220 apartments at the end of Boulder Springs Drive in eastern Chesterfield County.