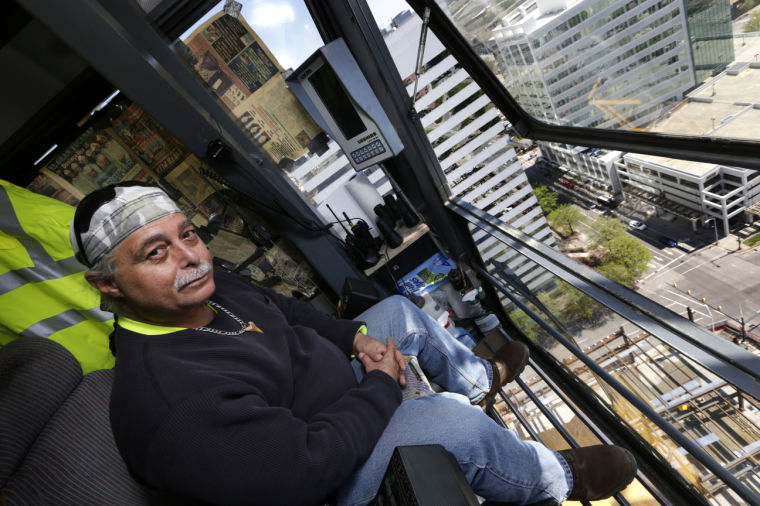 From his seat 310 feet above Canal Street in Richmond, Richie Guerra has a view of downtown like no other. Guerra, who is from Miami, Fl., has been operating tower cranes for about 15 years. On April 16, 2013, he lifts metal beams into the framework of the new Gateway Plaza building. 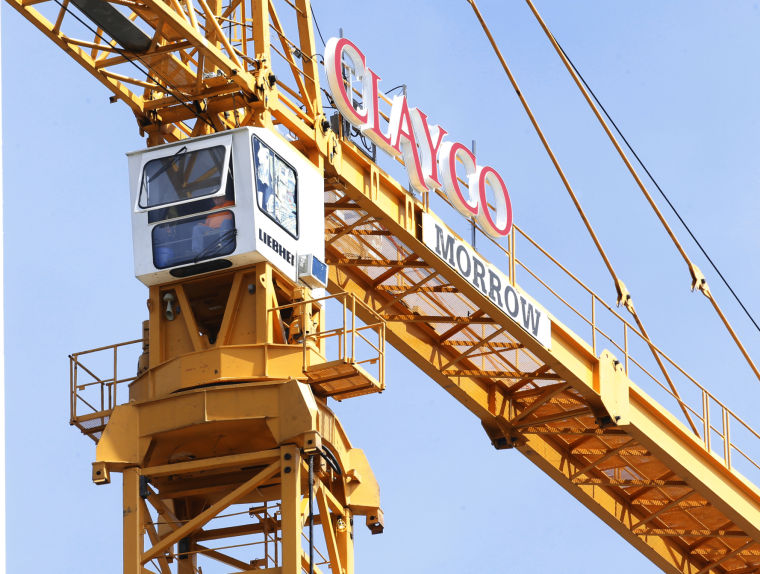 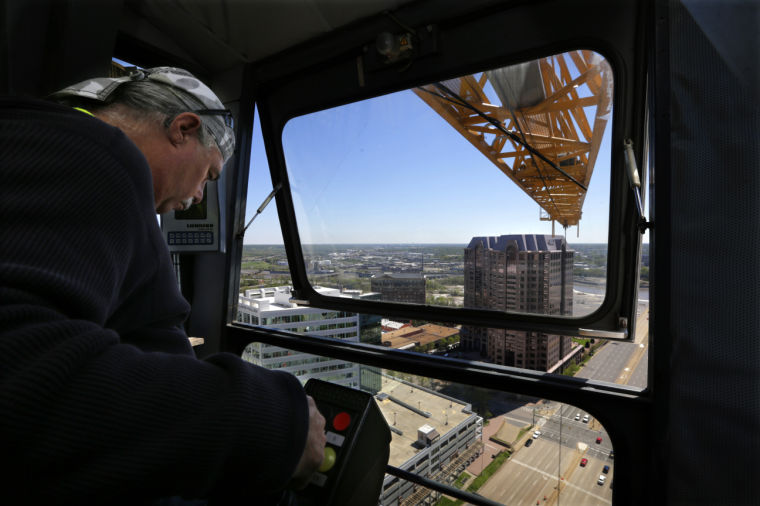 Richie Guerra has a view of downtown Richmond like no other. From 310 feet, he operates the crane used in construction of the Gateway Building. 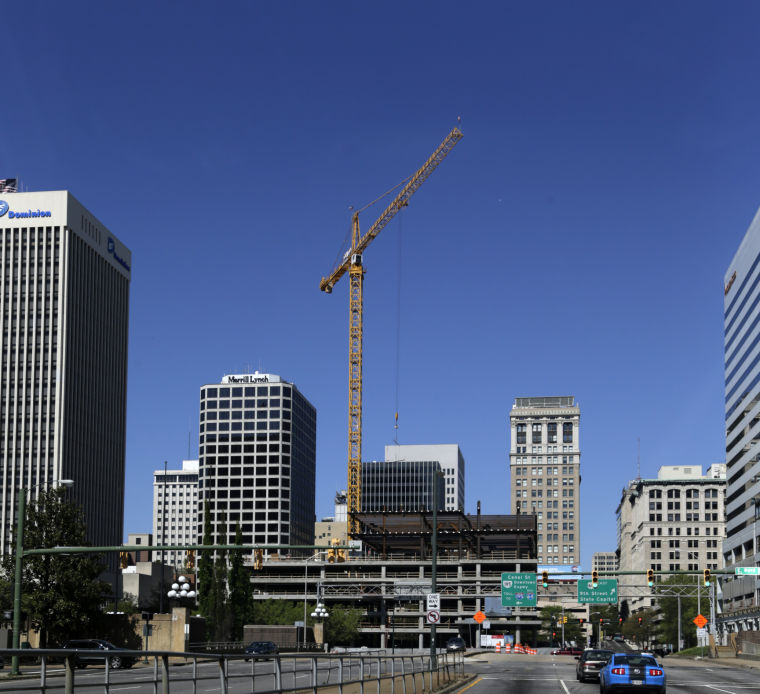 The tower crane above Richmond on April 16, 2013, used to move metal beams and other heavy construction items into the framework of the new Gateway Plaza building. 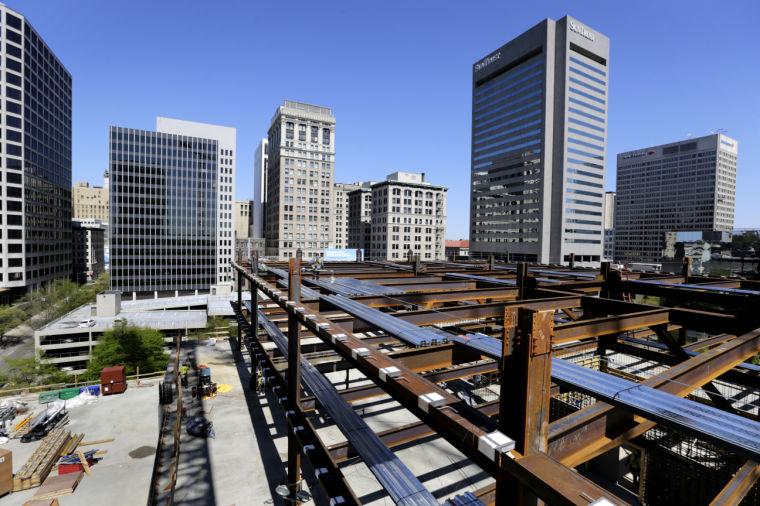 Every working day, Richie Guerra climbs to his office.

You may have seen it — the cab of the tower crane he operates, 280 feet straight up at the Gateway Plaza high-rise project in downtown Richmond. There’s no elevator, no lift — just Guerra going up the ladder. About 380 rungs, altogether.

It’s one of the best jobs in the construction business, Guerra said, and worth the effort.

The 18-story, $110 million office tower being developed by Chicago-based Clayco Inc. — between Eighth and Ninth streets, facing Canal Street — is to be home of Richmond law firm McGuireWoods and other tenants. McGuireWoods will be moving a block from its current space in the James Center.

Mike Zetlmeisl, who runs the project for Clayco, said the developer expects to set the traditional evergreen on the structure’s top girder by July, and have the building ready for McGuireWoods’ 630 attorneys, staff and consultants by the following summer.

Guerra’s work is crucial to the project. “He has a pretty special skill set,” Zetlmeisl said.

One of those skills is a climber’s endurance.

The 55-year-old crane operator ascends the steel ladder two 20-foot segments at a time, taking brief breaks before the next two segments. “I used to do three at a time,” he said, “when I was younger.”

Carrying his lunch, he starts the climb at 6 a.m. He said it takes him exactly 27 minutes to reach the cab, about the size of a Volkswagen bug, about 40 feet below the 321-foot crown of the tower crane.

“I do my safety inspections, check the switches, do the paperwork,” he said. “At seven o’clock, we start rolling.”

He doesn’t leave the cab until 9 p.m. (Yes, he has makeshift toilet facilities.) The climb down takes only eight minutes, he said.

As the project progresses to its upper floors, the tower crane will be extended and secured to the building to that point. The crown will be raised to 378 feet and the cab to about 338 feet.

The crane’s horizontal boom can extend as far as 180 feet and bear up to 16,000 pounds on a hook extended from the tip — more than twice that weight when the hook is closer to the upright.

The assembled crane weighs 400,000 pounds and was delivered to the construction site on 17 trucks by Morrow Equipment Co., an Oregon-based firm with cranes at 687 projects in the U.S. and at other sites around the world.

Bill Seeber, an engineer with Morrow, said a tower crane is anchored by an in-ground foundation that can weigh as much as 80 percent of the weight of the crane itself, depending on the soil.

Guerra, who lives in Miami, has been operating cranes since 1980 — the past 15 years in tower cranes.

“I knew that was where the money was,” he said, “so I wanted to give it a try. I got the training. When they gave me tower cranes, I loved it.”

Websites about construction career opportunities list a wide range of pay expectations for tower-crane jockeys — up to $500,000 a year for a job in New York, one site says. Guerra declined to divulge his annual pay, but said describing it as breaking into the six-figure level is “about right.”

He has worked on projects across the country — for example, jobs in Miami, a bridge in Louisiana, a hospital in Mississippi, a college dorm in Tennessee. His children are grown, he said, and his wife often travels with him.

They are living in an apartment near the Gateway Plaza worksite, he said. “I walk to work, and when I get back at night, she’ll have a home-cooked meal for me.”

They haven’t seen much of Richmond yet, he said, but they enjoyed touring the state Capitol, and liked the Lewis Ginter Botanical Garden when the Christmas lights were up. They’ve been to Virginia Beach a few times.

Guerra said he rests most Sundays, watching NASCAR on television and rooting for whichever driver he has in a pool he shares with his co-workers.

When a job is finished, Guerra said, he’ll usually take a few weeks of vacation, then head for the next project.

In his high-rise cab, he has a view that stretches for miles in every direction.

When he’s working, he uses controls at each hand to direct the crane’s boom and the cable that lifts and lowers the hook. He picks up girders and other materials, watching the site below and monitoring a computer screen.

Constantly communicating with workers on the ground who trust him without reservation, he puts the materials where they need to be, and does it without any discernible pendulum swing.

“What I like is the challenge of it,” he said, “to control 16,000 pounds and put it in somebody’s hands nice and gently.”

Then he laughed and said, “I can pick the pockets of the guys on the ground.”

Guerra is aware that running a tower crane demands uncompromising attention to safety.

A search of the U.S. Department of Labor’s Occupational Safety & Health Administration website yields a list of 13 accidents in the past 10 years that have resulted in injuries or fatalities. The deadliest on that list is a crane collapse that killed six in New York in 2008.

Guerra said that’s why he takes safety procedures and inspections — his, those of fellow workers and the ones required by state and federal law — so seriously. He wants to be certain that he’s in control and not a danger to himself or anyone else.

“And we’ve got the best equipment,” he said. “I’m driving the Cadillac of the skies.”

The tower crane at the site is designed to withstand “a massive wind-load,” said Zetlmeisl, with project developer Clayco.

A 95-mph wind burst hitting the boom from the side would move the top of the crane about 7 feet and leave it unharmed, he said.

And when the operator comes down, Zetlmeisl said, “the wind will just blow the boom like a weather vane.”

Guerra said he has been rattled a few times by high winds.

Once, on a job in Miami, he said, his crane was hit without warning by what was measured as a 95-mph microburst.

“I was trying to set some aluminum down on the back of a truck,” he said. “The wind caught me at the wrong time. I got the aluminum on the ground, set the boom for weather-vane and said, ‘That’s enough of today’s entertainment.’”

How long will he keep working tower cranes? “Until I can’t do it no more,” Guerra said.

He recalled working on a project where an operator was called out of retirement at age 72 to run another tower crane at the same site.

“They didn’t have anybody else to call in,” Guerra said, “and the guy ran the crane just fine. I think I can do it until I’m 72, too.”

The pandemic certainly has changed the workplace.

Building your credit: Myths and reality

Also, check out more of this week's best personal finance tips from experts, including a look at what's new for Medicare open enrollment.

From his seat 310 feet above Canal Street in Richmond, Richie Guerra has a view of downtown like no other. Guerra, who is from Miami, Fl., has been operating tower cranes for about 15 years. On April 16, 2013, he lifts metal beams into the framework of the new Gateway Plaza building.

Richie Guerra has a view of downtown Richmond like no other. From 310 feet, he operates the crane used in construction of the Gateway Building.

The tower crane above Richmond on April 16, 2013, used to move metal beams and other heavy construction items into the framework of the new Gateway Plaza building.