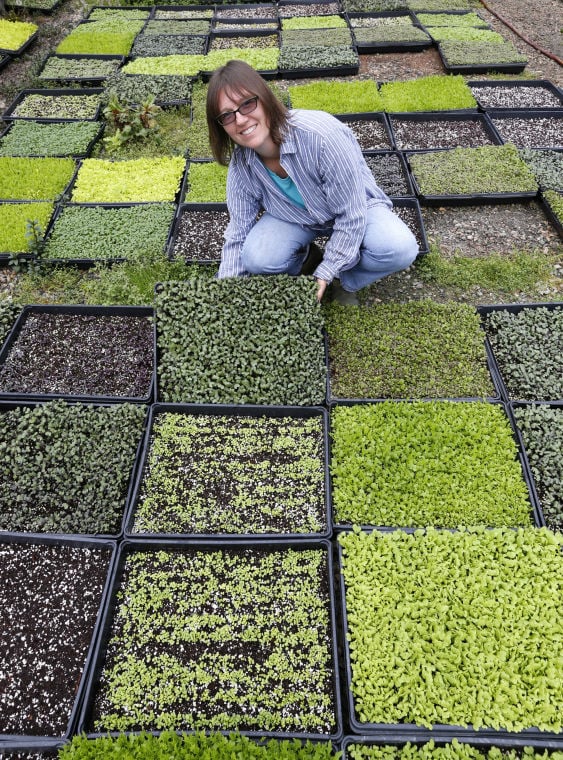 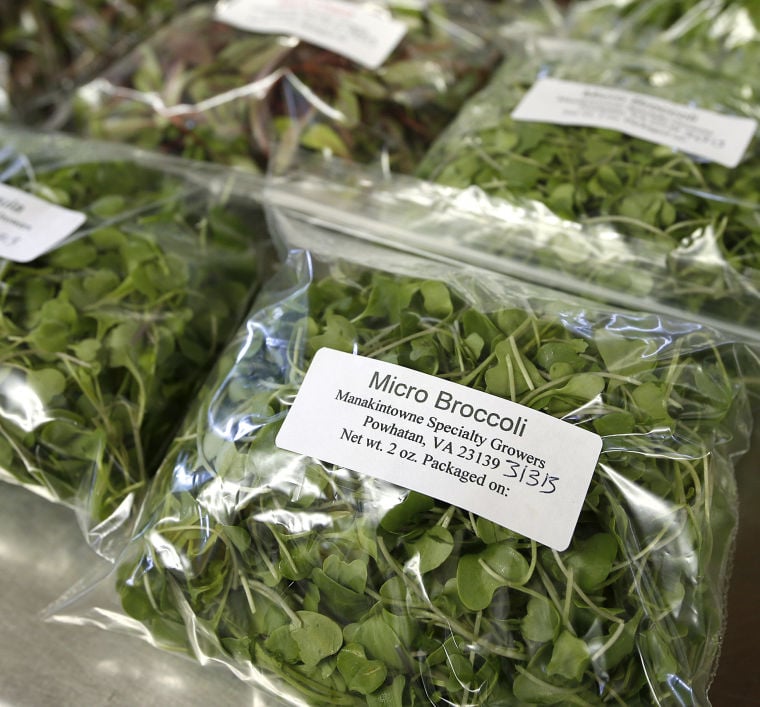 Micro broccoli and micro arugula are among rhe items grown and sold by Manakintowne Specialty Growers in Powhatan, Va. March 12, 2013.

In the soft light coming through the plastic cover of one of her two greenhouses, Jo Pendergraph stood among trays full of growing micro vegetables — chard, broccoli, arugula and pea shoots. She was smiling.

This is what she and her husband, Rob, have been doing for nearly three decades — growing and selling produce.

“At first,” she said, “the reaction we got was, ‘What is it you’re doing?’ But there has been a huge explosion of interest in local produce.”

The Pendergraphs’ 21-acre farm, Manakintowne Specialty Growers in Powhatan County, is one of scores of Richmond-area farms making the most of that interest.

“Buy local” has become a marketing mantra for food retailers — from roadside stands and farm-product co-ops to restaurants and grocery stores.

Agriculture is the state’s largest industry, with a $55 billion annual economic impact. Virginia’s Department of Agriculture and Consumer Services does not track how much of Virginia’s produce stays in the state, but Elaine Lidholm, director of communications, said the buy-local movement is “so pervasive it’s impossible not to see.”

She said customers expect fresh products at restaurants and grocery stores — and not just specialty stores that have built reputations on carrying local produce.

“Even the big chains and big-box stores like Walmart are getting a lot of their produce within Virginia,” she said.

Grocery and big-box stores appear to be following the lead of restaurants, where fresh ingredients have long been a marketing emphasis. The Pendergraphs’ farm in Powhatan supplies about 60 restaurants in Richmond and surrounding counties, Charlottesville and Williamsburg.

Good chefs want the freshest possible ingredients, she said. “They want to get it the day it is picked — something that hasn’t been trucked here from South America or the West Coast.”

Some chain restaurants have taken up the buy-local refrain. Silver Diner is a Mid-Atlantic regional chain with 14 locations — the one in Innsbrook is the farthest south. For the past three years, the company has made fresh, healthy, locally produced foods its marketing and philosophical emphasis.

The chain’s founder and executive chef, Ype Von Hengst, said it has been a challenge to overcome the greasy-spoon stereotype associated with the word “diner.”

Younger families have responded to the chain’s new image, he said. “They appreciate that we’re meeting a moral obligation to serve better, healthier food to our guests.”

Late winter is a frustrating time of year, Hengst said, with less than a quarter of Silver Diner’s ingredients local, as opposed to 80 percent during the region’s peak growing season.

“We’re a high-volume company,” he said. “We can’t get by with one carton of tomatoes or one flat of eggs. … We’re looking forward to spring when the farms we work with will be shipping their fruits and vegetables to us again.”

Among those vendors is Parker Farms, headquartered on Virginia’s Northern Neck and with farms from Maryland to Florida — 3,000 acres in all.

Ron Harvey, produce salesman for Parker, said the company looks for close-by customers like Silver Diner. Parker’s Northern Neck farm, he said, ships up to 75 percent of its products to customers within 100 miles.

“The consumer wants something fresh,” Harvey said. “And a food establishment that wants the respect of its customers will have fresh products.”

He said long-term relationships with grocery and restaurant chains are an advantage to farms.

“You know they want specific items,” he said, “and you can plan ahead a lot easier — how much you need to grow and when it will need to be shipped so the consumer gets it in a timely fashion.”

Not willing to concede fresh-produce-enthusiast customers to neighborhood grocers such as Ellwood Thompson’s — or to outfits including Whole Foods, Tom Leonard’s, Trader Joe’s and Fresh Market — all the larger chains with a Richmond presence take pains to buy local and to let their customers know that.

For example, Cincinnati-based Kroger Co., with 2,424 stores in 31 states, has regional officers who bring locally grown produce to the shelves.

Martin’s, with 199 stores in four states, includes 21 Virginia farms among its vendors.

“We like to promote the farmers we work with, too,” he said. “The farmers benefit, and the community benefits.”

For Kroger’s 23 stores in the Richmond area and Hampton Roads, Wayne M. Davis is district coordinator for produce, floral products and natural foods.

At peak times, he said, as much as 15 percent of the produce on the shelves in the stores he serves is locally grown.

Davis said the local connection makes it easier to trace produce for quality control. “We can track the time of day something was picked, who picked it and in which field. We can track when it went into the cooler.”

One of the suppliers Kroger buys from is the 181-acre Hanover Plant and Vegetable Farm. Owner Jeff Sears, the third generation of his family to farm the land, said his relationship with Kroger gives him the steady customer a farm needs.

“Kroger accounts for at least 80 percent of what we grow,” he said. “We deliver to them every day. It’s not taken to a warehouse where it sits for days, then shipped from state to state.”

In addition to restaurants and grocery stores, farmers markets and food cooperatives connect consumers and farms.

Goochland County-based Fall Line Farms, one of a handful of Richmond-area co-ops, connects about 100 farms to subscribers who pick up weekly orders. “It’s an online farmers market, in a sense,” said Molly Harris, the co-op’s founder and owner.

“You might define ‘local’ as 500 miles,” she said. “On the other hand, you might define it as your own community — Fall Line Farms was created to do that.”

She said one mission of the co-op is to educate customers about eating what local farms produce and diversifying their diets to fit farming cycles.

The increased demand for fresh produce harkens back to the first half of the 20th century and before, said Lidholm, of the state agriculture department.

“Used to be, ‘buy local’ was all anybody did,” she said. “Eventually, advances in transportation made it possible to get most any kind of produce anywhere.

“Now,” she said, “a lot of people are rediscovering what’s so good about that corn that’s just been picked.”

357,000: number of farming-related jobs in Virginia

Farm to table Fresh local produce is the new trend at Richmond restaurants and groceries.

Fresh local produce is the new trend at Richmond restaurants and groceries.

Micro broccoli and micro arugula are among rhe items grown and sold by Manakintowne Specialty Growers in Powhatan, Va. March 12, 2013.