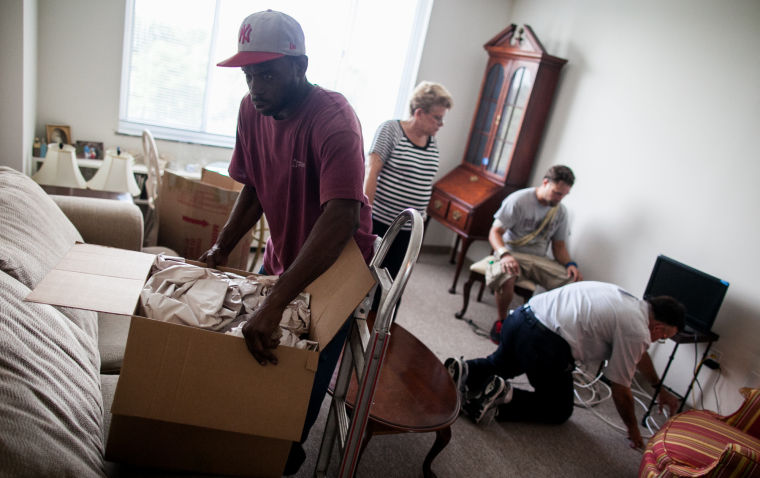 “I couldn’t have done it without them,” said Jeanne Jenkins (second from left), who used the services of a senior move manager to help her go from her three-bedroom townhouse in Short Pump to an apartment half its size. Here, Door to Door solutions employees Kelvin Robinson (from left), Kris Cary and Robin Ryan help Jenkins get settled at Imperial Plaza. 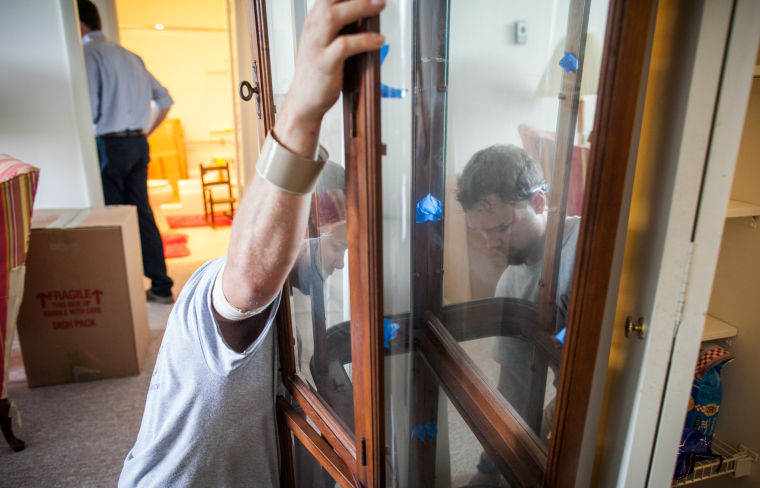 Senior move managers can help customers by coordinating a variety of tasks, from preparing a home for sale by a real estate agent to moving furniture into place at a new destination.

When it came time for Jeanne Jenkins to move from her Short Pump home of 25 years to an apartment in the Imperial Plaza retirement community in Richmond, she was overwhelmed.

The new apartment is less than half the size of her three-bedroom townhouse.

Jenkins, 66, called a senior move manager to help her maximize the new space.

“Good grief,” she said. “I couldn’t have done it without them.”

The market for these companies started as a small niche more than a decade ago, but it has flourished as the population gets older and the need increases.

“The whole East Coast, frankly, is a hotbed for senior move management,” said Mary Kay Buysse, executive director of the National Association of Senior Move Managers, a trade group for the industry.

The organization was founded in 2002 by the owners of 22 companies that specialize in senior move management. Since then, the trade group has grown to more than 850 members.

“We have quadrupled in the last five years,” Buysse said. “But that makes sense because the population is aging at an unprecedented rate.”

The average price for the service locally can range from $1,000 to $4,000, depending on the complexity of the move and the degree of the company’s involvement.

A senior move manager can help a customer prepare his or her house to be sold by a real estate agent, and work with the person all the way through the unpacking of the last box at the new destination. Several local senior move management companies also offer assistance in liquidating property through estate sales or consignment sales.

The job can involve moving an elderly couple out of a house that they have lived in for more than 40 years, which can be emotional, Buysse said.

“It’s pretty arduous,” she said. “It’s a lot of responsibility, dealing with someone else’s entire life.”

Senior move management companies are growing in popularity because families just don’t have the time to conduct a move on their own, said Dave Bodman, sales and marketing director for Imperial Plaza.

“The ones that are doing it on their own are dwindling,” Bodman said.

When Jenkins moved into Imperial Plaza this month, she watched as five employees from Door to Door Solutions, a Richmond-based senior move management company, unpacked her belongings. The employees helped arrange her furniture and even helped set up her cable box.

Families are geographically dispersed and adult children often are not able to help with moving because of distance, career and family obligations, the senior move managers group said.

Besides, many seniors have no surviving children or, increasingly, their children are older adults themselves and aren’t emotionally and physically able to help with a move.

The need for senior move managers will increase as baby boomers age, the group said. By 2030, the elderly will account for one-fifth of the U.S. population.

When it comes to picking a senior move manager, “you really have to make sure you’re a (personality) match,” said Doug Sutton, owner of the Richmond-based MoveMyMom LLC. “It’s why we’re not just movers.”

Several other senior move managers in the Richmond area agreed.

A strong personality match between the mover and customer can help alleviate the emotionally sensitive aspects of the move, said Katie Hamann, owner of Door to Door Solutions.

“The most challenging part is helping people to transition to a stage in their life that is very final,” Hamann said.

Another major hurdle is downsizing.

One of the biggest parts of the job is helping a customer “understand that being a great consumer (their) whole life is tough to reverse,” Hamann said.

A typical relocation might involve moving an elderly couple out of their 2,500-square-foot home and into a space of less than half that size — sometimes as small as 700 or 800 square feet, Sutton said.

“It’s just a matter of working it around until you get it to work,” said Sutton, who has drawn up more than a dozen potential floor plans for a single customer’s move.

In the Richmond area, eight companies are registered as members of the National Association of Senior Move Managers.

Five of those companies have received the organization’s Circle of Service recognition for maintaining high levels of service for at least five years. The other three lack the designation because they have not been in service for five years.

It’s hard for senior move management companies to distinguish themselves from their competition because they all specialize in moving elderly people, Sutton said.

However, there are some differences among local companies.

MoveMyMom’s Sutton became a registered interior designer in Virginia after receiving a four-year degree from Virginia Commonwealth University in his mid-30s.

His ability to organize a floor plan made him the go-to guy among his friends when they needed help moving their parents. He decided to turn that into a business.

Sutton’s company, like many senior move managing companies, does not do the physical moving — except for small-scale moves. Instead, Sutton orchestrates the family and all of the contractors necessary for a move.

“It’s like wedding planner,” Sutton said. “You just have to have everyone moving on the same page.”

Sutton employs one other full-time employee and has two part-time employees who can work whenever he needs the help.

Susan Campbell’s company, More Than Moving For Seniors Inc., has more than 30 employees.

Employees at her company conduct 10 to 15 moves a week with three moving trucks that the company either leases or owns.

The company also created Susan’s Selections store to sell on consignment the furniture a family does not want after the move, keeping half the sales.

Campbell said a typical small-to-medium move costs $1,000 to $3,000. She said she had one move from a large home that involved moving furniture to multiple locations, which ran her client more than $10,000.

Alyson Pedlow, owner of Home Matters of VA, agreed that the price of a move can have a wide range with several variables. Pedlow said the price of a typical move ranges from $1,500 to $3,000 — but that does not include the cost of a moving company.

Pedlow’s company has no full-time employees, but she contracts labor when necessary. Home Matters assists with packing, unpacking, floor planning and real estate preparations, among other services. Pedlow, like Sutton, works with a third-party moving company to conduct a move.

She estimated that a handful of companies across the country offer moving services in-house. Campbell’s company is one of two such companies in the Richmond area.

Hamann’s Door-to-Door Solutions also owns or leases two moving trucks and employs 15 people, half of whom are movers.

Business had slowed late last year and early this year for some local senior move companies, as it typically does during the winter months, those owners say.

“We are very much influenced and impacted by … the real estate market,” Hamann said, adding that she has seen continuous improvement since February.

Campbell said she was not concerned about the slight business slump during the winter months because it happens every year, coinciding with the housing market.

Several local owners also said that the winter slump this year was not as bad as in past years.

Sutton said another reason for the slowdown at his MoveMyMom business could be the growing popularity of aging in place.

A different industry, he said, is dedicated to helping people adapt their homes and providing services to allow them to grow old without moving to retirement communities or apartments.

Despite the growing popularity of aging in place and the fluctuations in the housing market, Buysse thinks the growth of senior move management, as an industry, will be largely unaffected.

“This thing is going to be big for the foreseeable future,” Buysse said. “Really, the next two decades.”

Here are some questions to ask a senior move manager:

• How long have you been providing senior move management services?

• What are your professional credentials?

• Are you fully insured for liability and workers’ compensation?

• What are your fees?

• Will you provide me with a written contract?

• Can you provide several references? (Be sure to check the references.)

Here are some senior moving companies in the Richmond area based on membership in the National Association of Senior Move Managers, with phone number and websites:

Dominion Energy is selling one of its downtown office towers

Dominion Energy is selling one of its prime downtown properties.

Ask SCORE: How to secure a SBA loan

QUESTION: I understand it’s easier to obtain a loan from the Small Business Administration than from a commercial bank. What do I need to do t…

Kiplinger's Personal Finance: When retirees should amend a tax return

You filed your tax return months ago, but then you happen to glance at a copy and notice a mistake. What should you do?

WATCH NOW: AFL-CIO president tells striking Mondelez workers in Henrico that it is 'fed up with the way you have been treated'

American union workers are fed up with skyrocketing inequality and runaway corporate greed, and they are standing up for their rights, the new…

“I couldn’t have done it without them,” said Jeanne Jenkins (second from left), who used the services of a senior move manager to help her go from her three-bedroom townhouse in Short Pump to an apartment half its size. Here, Door to Door solutions employees Kelvin Robinson (from left), Kris Cary and Robin Ryan help Jenkins get settled at Imperial Plaza.

Senior move managers can help customers by coordinating a variety of tasks, from preparing a home for sale by a real estate agent to moving furniture into place at a new destination.