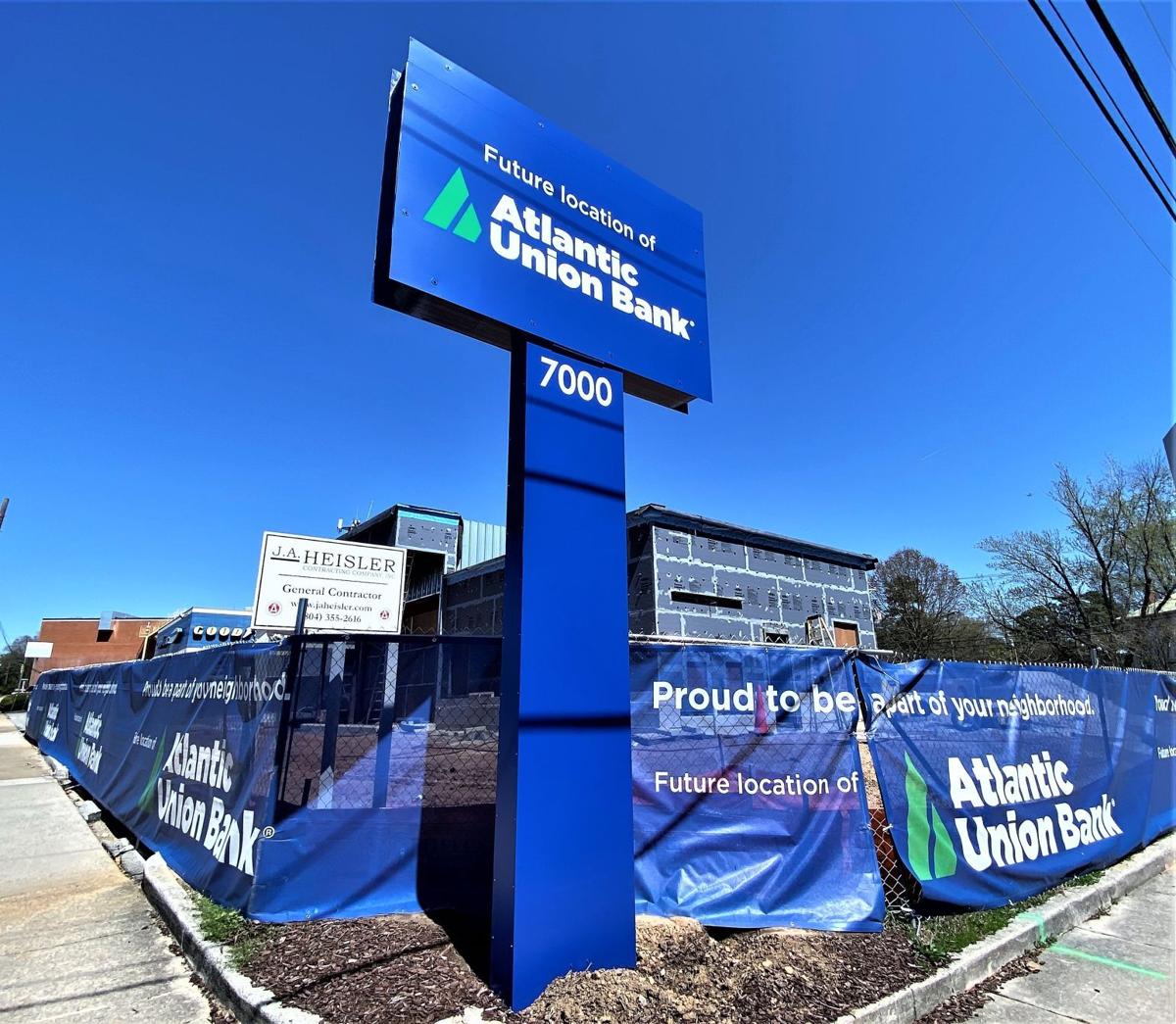 A new branch of Atlantic Union Bank, being built off Three Chopt Road near The Village shopping center, is slated to open in June. 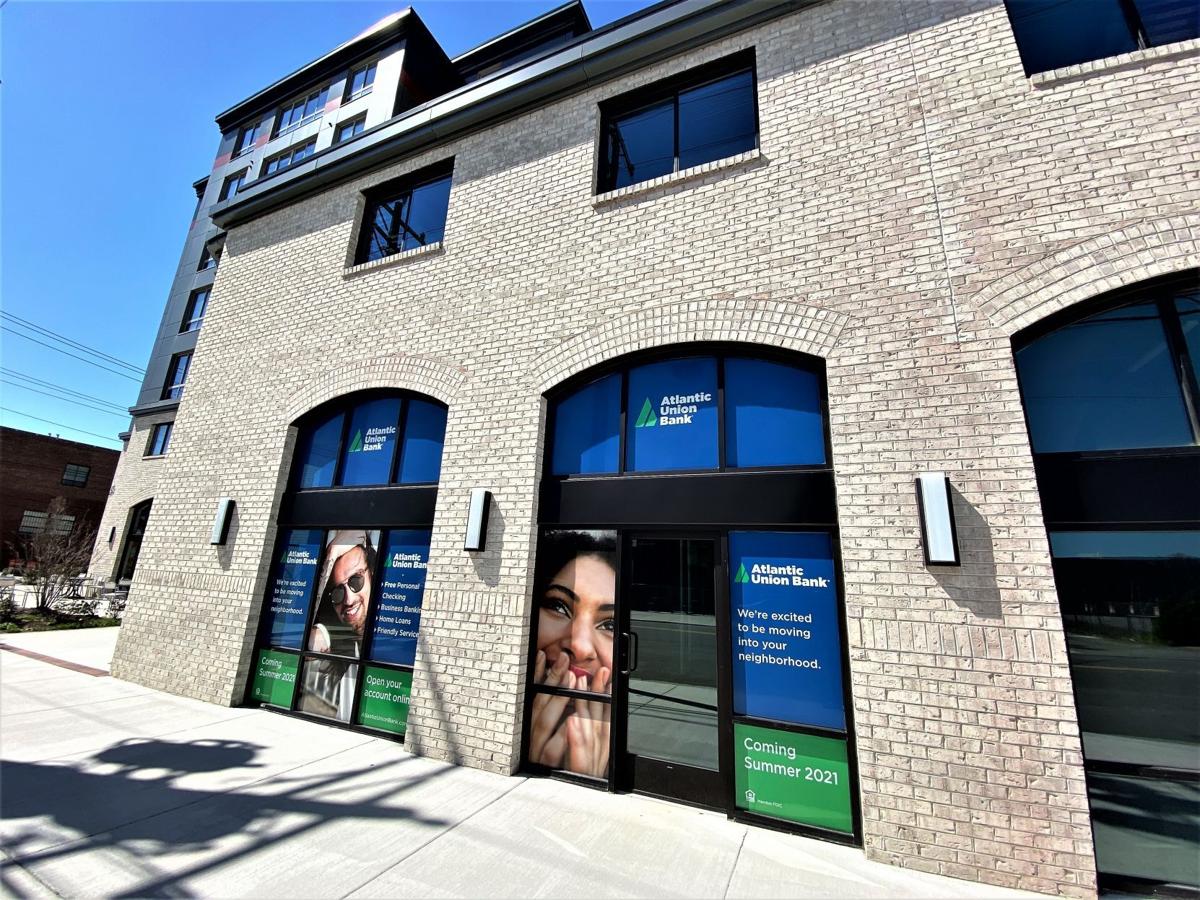 Atlantic Union Bank has signed a lease for a 1,350-square-foot street level space at 1406 Roseneath Road in the Scott’s View apartment complex in Scott’s Addition. That branch should open in late June.

Atlantic Union Bank is building a new branch - its first newly built one in the Richmond region in three years - as well as putting a new location in the trendy Scott's Addition neighborhood.

The branch under construction at 7000 Three Chopt Road in Richmond's West End will replace the bank's current storefront location across the street at The Village shopping center.

The new 2,210-square-foot standalone, on the site of the former 3 Chopt Mart convenience store, will have a drive-thru and dedicated parking lot. The location at The Village is walk-in only.

"We are confident that this larger, state-of-the-art facility with drive-thru service will be a welcome upgrade to customers who are seeking an easier, more efficient banking experience," said Maria Tedesco, president of Atlantic Union Bank.

The lobby will have retractable glass walls allowing the space to operate in a multi-purpose capacity with the flexibility to convert it for meetings and other gatherings.

The branch is slated to open in June.

The Richmond-based bank will close the branch in the shopping center when the new location opens.

It had closed two branches in the Richmond region last year - among a total of 14 across the state. One of those closed branches was 5300 Patterson Ave., which was consolidated into its location at The Village shopping center.

Atlantic Union Bank also signed a lease for a 1,350-square-foot street level space at 1406 Roseneath Road in the Scott’s View apartment complex in Scott's Addition. That branch should open in late June.

“We are thrilled to join the bustling Scott’s Addition district, which is one of Richmond’s fastest growing neighborhoods," Tedesco said. "This new branch has been designed to best service the residents and businesses of Scott’s Addition and its surrounding communities today and well into the future.”

The Scott’s Addition branch will have an outside ATM vestibule, night drop and adjacent garage parking. The branch will be just off of a courtyard that has outdoor seating.

Atlantic Union Bank, which has 24 offices in the Richmond area, will join two community banks that also are planning to open branches in the Scott's Addition neighborhood this year. M&T Bank already operates a branch in Scott’s Addition at West Broad Street and Highpoint Avenue.

The 2,700-square-foot branch will be at the corner of Roseneath Road and West Clay Street by taking part of the former Infuzion nightclub space. The branch should open this summer, said John Dane, Virginia National Bank’s Richmond market president..

Village Bank plans to put a branch on the first floor of The Nest apartment building at 3117 W. Marshall St. It should open later this month.

Chesterfield County-based Village Bank recently closed its branch at 1650 Willow Lawn Drive in Henrico County, located about 2 miles west of the planned Scott’s Addition location. The deposits were transferred to the branch at 1401 Santa Rosa Road in the Forest Office Park.

How to invest your tax refund wisely

Why Is Dogecoin Trading at New All-Time High?

Why Is Dogecoin Trading at New All-Time High?

Michael C. Hild was the mastermind of an alleged multimillion-dollar bond fraud scheme that substantially increased the assets of his Live Wel…

Chesterfield factory that planned to make plastics from natural material moved out of state; equipment being auctioned off

A new branch of Atlantic Union Bank, being built off Three Chopt Road near The Village shopping center, is slated to open in June.

Atlantic Union Bank has signed a lease for a 1,350-square-foot street level space at 1406 Roseneath Road in the Scott’s View apartment complex in Scott’s Addition. That branch should open in late June.