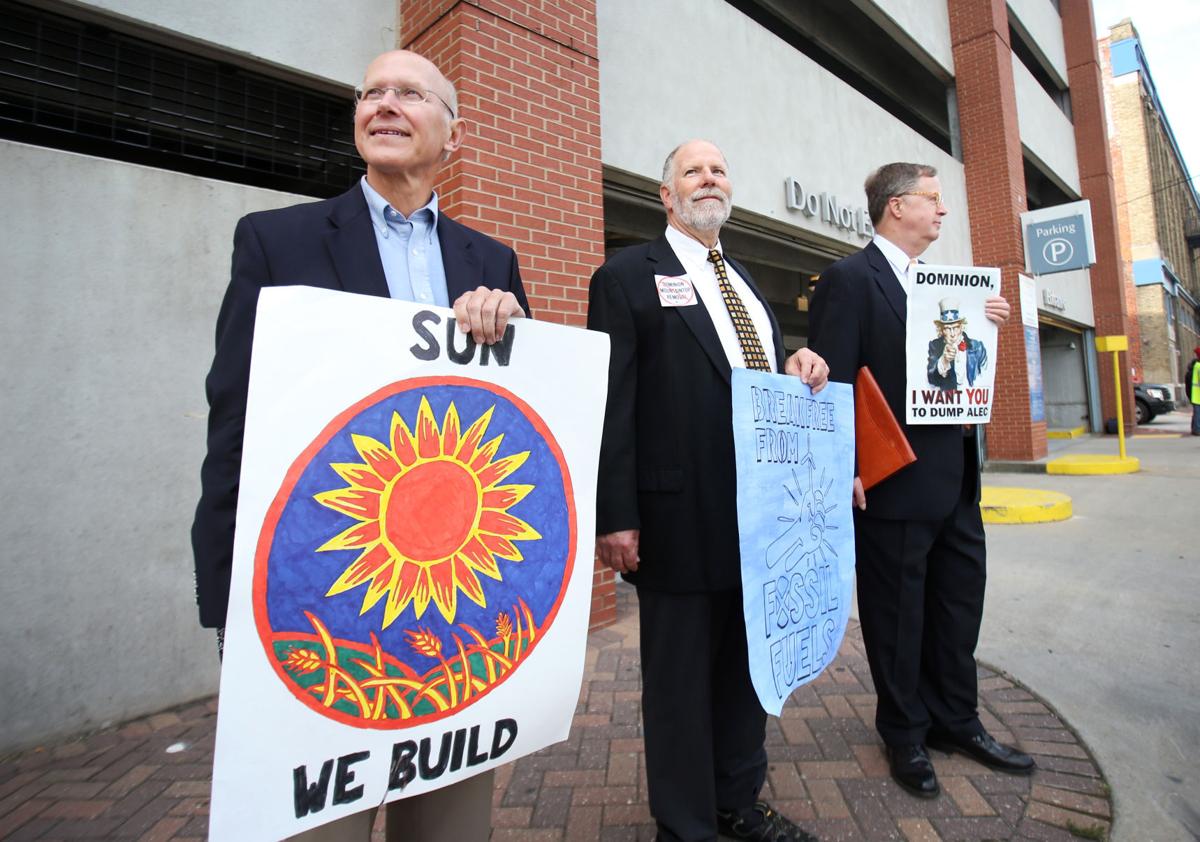 Glen Besa (from left) of Chesterfield, Steve Carter-Lovejoy of Richmond and Seth Heald of Culpeper County hold signs outside a parking garage being used for the Dominion shareholders meeting. 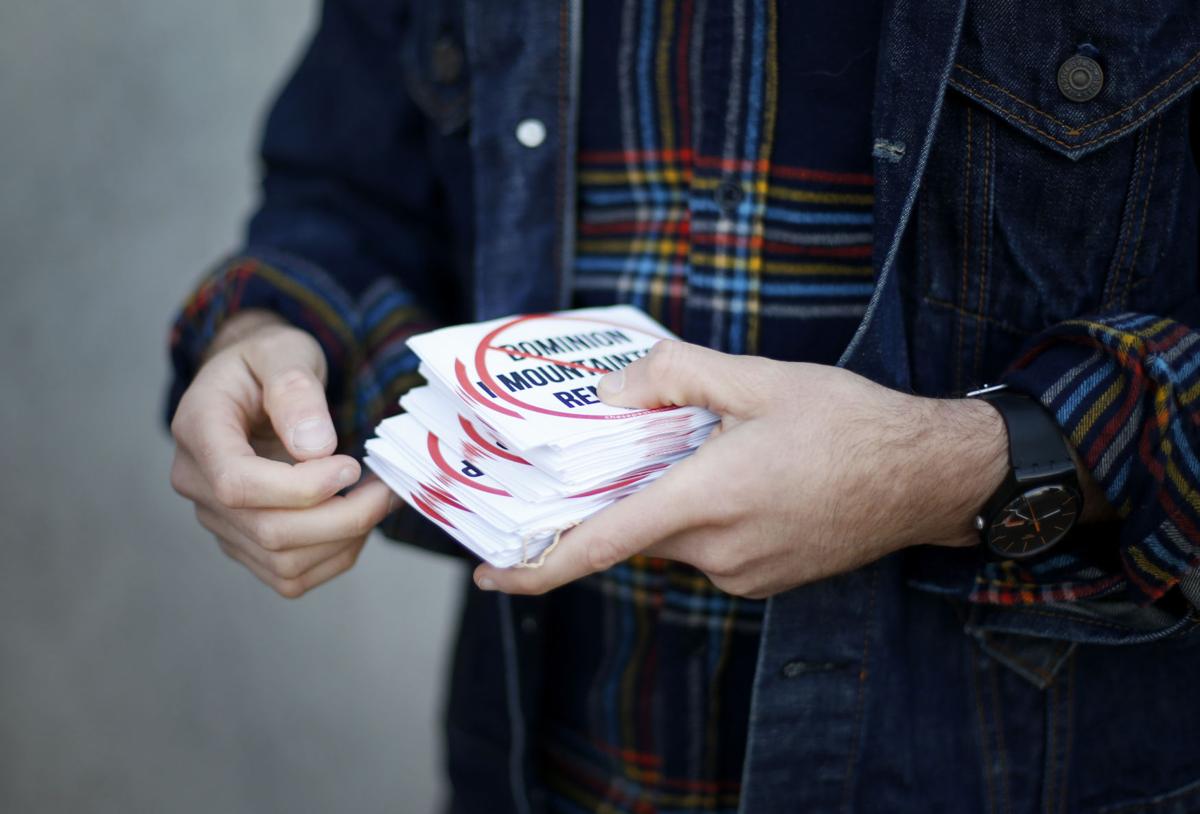 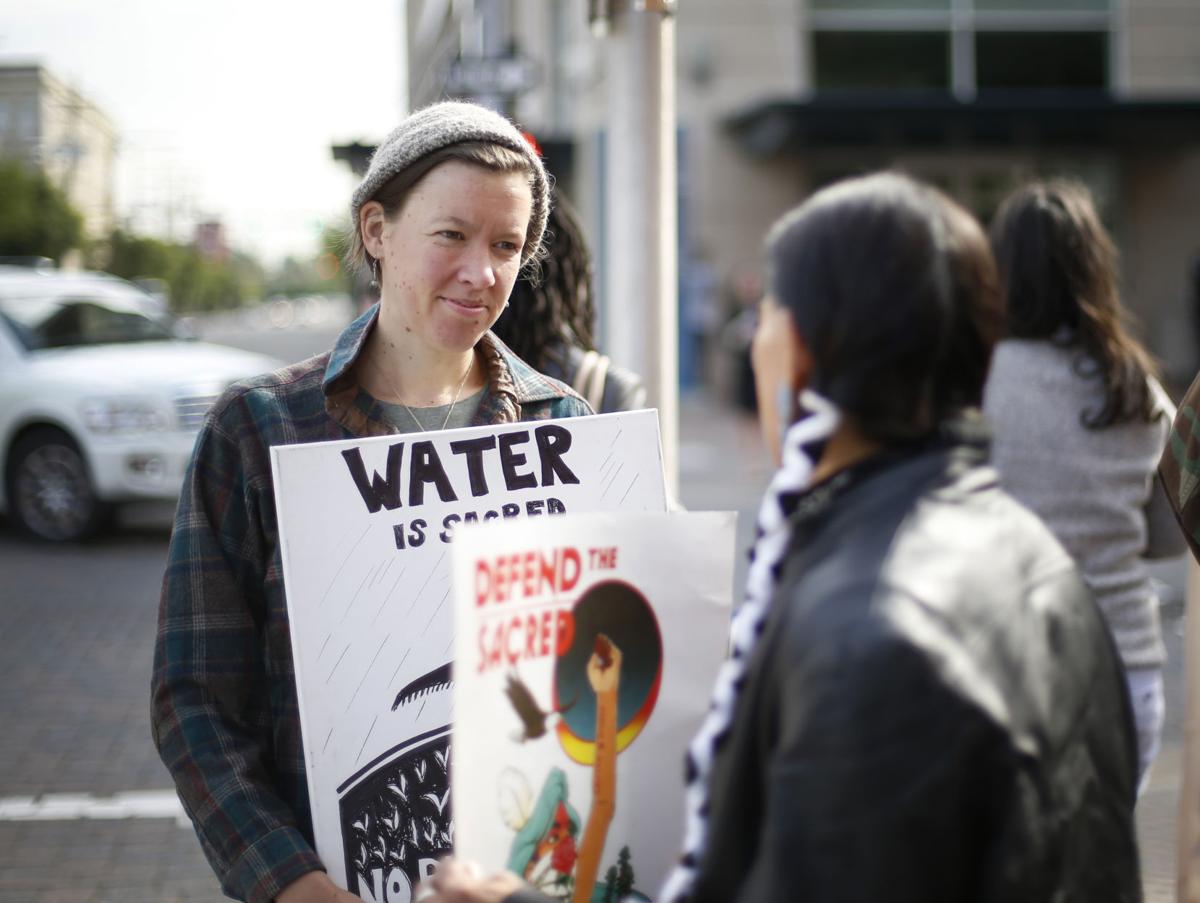 Lara Mack (left) of Rockingham County talks with Vanessa Bolin of Richmond outside of the parking garage the Dominion shareholders were planning to use for their shareholders meeting on Wednesday May 10, 2017. Environmental and anti-pipeline groups were protesting Dominion's shareholder meeting.

Dominion's shareholders approved a company name change Wednesday but rejected proposals related to lobbying disclosures, nominating a board member with environmental expertise, preparing a report on methane emissions and publishing a risk assessment of the company's investment in fossil-fuel power generation, among other actions at the yearly shareholder meeting.

"In short, we produce energy — electricity — and we transport energy — electricity and natural gas," said Farrell, whose nearly $13.3 million in salary, stock awards and other compensation for 2016 was also endorsed by shareholders in a nonbinding, advisory vote.  Dominion's operating earnings were $2.3 billion in 2016.

The name change will also filter down to the company's other business units. For example, Dominion Virginia Power, the state-regulated utility that has about 2.3 million customers in Virginia, will be called Dominion Energy Virginia.

Company officials and shareholders sipped coffee and chatted before the meeting at the Greater Richmond Convention Center behind large black pipe and drape sets that blocked the glass windows at street level as well as those on either side of the elevated walkway over East Marshall Street that attendees had to transverse from the parking garage to get into the gathering.

"What are they trying to prevent their shareholders from seeing?" said Vanessa Bolin, an environmental activist from Oklahoma who is living in Richmond and spent time in North Dakota protesting the Dakota Access Pipeline. Bolin was one of a handful of protesters, a common fixture at Dominion shareholder meetings over the past several years, standing outside the convention center Wednesday morning. They were joined by dozens more for a rally at Nina F. Abady Festival Park after the meeting ended.

"Hopefully they address the issues and let the shareholders have a real voice," Bolin said.

In addition to the unsuccessful proposals, more than a dozen shareholders questioned Farrell on big-ticket projects. They ranged from the company's potential pricey development of a third nuclear reactor at its Lake Anna power station and its approximately $4 billion natural gas liquefaction and export facility at Cove Point in Maryland to its controversial 600-mile, $5 billion Atlantic Coast Pipeline, which will bring shale gas from West Virginia through the heart of Virginia to North Carolina. The pipeline is awaiting federal approval.

Irene Leech, an associate professor at Virginia Tech, said she never dreamed her Dominion stock holdings would come into conflict with her Angus beef operation on 1,000 acres of Buckingham County land that has been in her family for generations and is proposed to be bisected by the pipeline.

"It looks like we're being sacrificed," she said, adding that she worried about laying down for the night within the "blast zone" in the event of a catastrophe.

Farrell said the federal permitting process for the pipeline, urgently needed, he added, to expand natural gas capacity in North Carolina and Virginia, is the "most thorough, exhaustive environmental review ever done for a project of this scope."

"It's going to be safe," Farrell said.

In a news release issued Wednesday morning to blunt environmental criticism, Dominion said it has cut carbon intensity by 43 percent since 2000. Total carbon emissions are also 43 percent lower than 2005, the company said. Sulfur dioxide emissions have fallen 94 percent, nitrogen oxides have dropped 78 percent and mercury is down 95 percent since 2000. Dominion has also saved about 4.4 billion cubic feet of methane since 2010, in part by aggressively replacing aging pipes, the company said.

"Rates are low, the air is cleaner, the grid greener and service better than ever before," company spokesman David Botkins said in a statement. "You would think we could find some common ground on these issues. I'm sure the folks marching today didn't charge their iPhones with a candle."

But environmental groups have pointed out that the long-term plan the company filed with the state last week would actually increase carbon emissions.

"I tried to get him to talk about climate change," said Seth G. Heald, chairman of the Virginia Chapter of the Sierra Club and a company stockholder who questioned Farrell. "You have to reduce carbon emissions total and you have to do it fast. When you're in an industry like Dominion's, not talking about it is not a responsible option."

Farrell also hailed Dominion's increasing investment in solar power in Virginia and North Carolina, where the company plans to have more than 700 megawatts of Dominion-owned solar installations operating by the end of 2018 in addition to 500 megawatts under contract from other developers.

But shareholders such as Ruth McElroy Amundsen an environmentalist from Norfolk, said the state and Dominion are still lagging behind the curve on solar development. Virginia was ranked 17th in 2016 for solar installations, per the Solar Energy Industries Association trade group. North Carolina, ranked fifth in 2016, installed 923 megawatts of generations in that year alone.

"We're starting out behind and we're only getting more and more behind," she said.

Zarina Fazaldin bought a broken-down brick house — once slated for demolition — that no one wanted in Richmond’s Jackson Ward neighborhood.

'This is a big deal for us;' CarLotz shares to start trading Friday on Nasdaq

About three months after opening the first CarLotz store a decade ago, Michael Bor and his partners knew selling used vehicles on consignment …

Joyner Fine Properties is leasing space in the Westhampton Commons mixed-use development that is under construction at Patterson and Libbie avenues.

Getting to know: Dr. Shaiv Kapadia with James River Cardiology

Glen Besa (from left) of Chesterfield, Steve Carter-Lovejoy of Richmond and Seth Heald of Culpeper County hold signs outside a parking garage being used for the Dominion shareholders meeting.

Lara Mack (left) of Rockingham County talks with Vanessa Bolin of Richmond outside of the parking garage the Dominion shareholders were planning to use for their shareholders meeting on Wednesday May 10, 2017. Environmental and anti-pipeline groups were protesting Dominion's shareholder meeting.