U.S. Coast Guard helicopters approach the top of a wind turbine nacelle during a training exercise 27 miles off the coast of Virginia Beach, Va., in the Atlantic Ocean, Wednesday Oct. 14, 2020. The Coast Guard and Dominion Energy along with techs from manufacturer Siemens Gamesa collaborated to develop rescue capabilities and emergency response procedures. (AP Photo/Steve Helber) 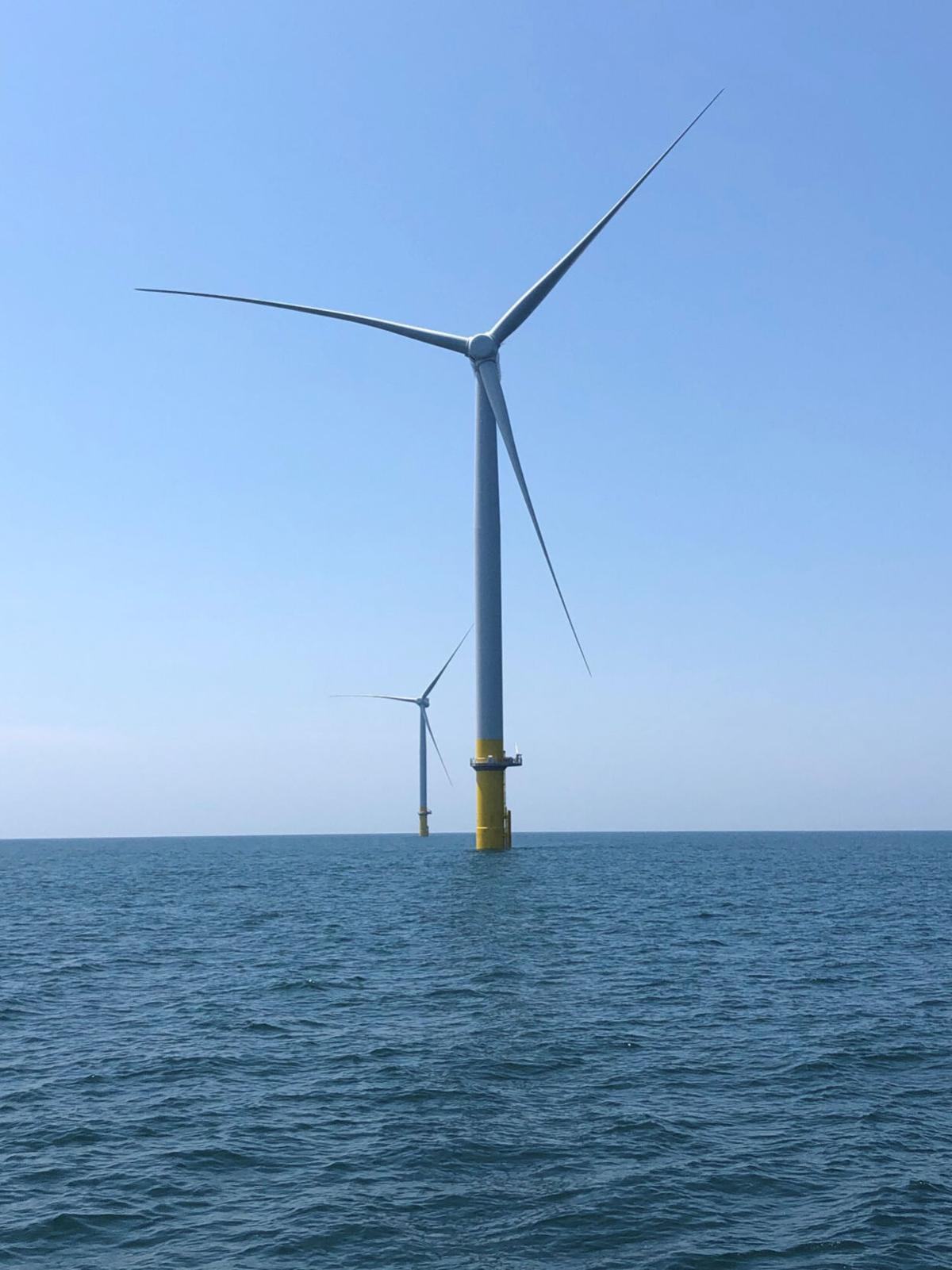 Two wind turbines installed by Dominion Energy off the coast of Virginia have the capacity to generate electricity to power 3,000 homes.

Dominion Energy said this week that a pilot project for producing offshore wind energy has moved past a key hurdle.

Two wind turbines that the company installed in June off the coast of Virginia have “successfully completed reliability testing,” and are ready to enter commercial service providing renewable energy in Virginia, the company said.

Dominion said it will submit the results of the tests to federal regulators with the Bureau of Ocean Energy Management, which will conduct a technical review to ensure the turbines are in compliance with the plans provided for the project. That review is expected to be complete by the end of the year.

The two turbines, located 27 miles off the coast of Virginia Beach, will remain in operation during the review process, Dominion said.

The turbines are the first fully operational, offshore wind power generation facility in U.S. federal waters. The only other offshore wind farm currently operating in the United States is in state-controlled waters off Rhode Island.

Standing at 620 feet including the rotating blades, the Dominion turbines are 65 feet taller than the Washington Monument. The company says they have the capability to generate power for up to 3,000 homes.

Dominion has described the pilot project as a key step in its plans to install more offshore wind turbines.

The company is proposing to start construction in 2024 on a much larger array of more than 180 offshore turbines that would produce enough renewable electricity to power up to 660,000 homes.

The completion of successful reliability testing is “a monumental day for the Commonwealth and the burgeoning offshore wind industry in America,” said Joshua Bennett, Dominion Energy’s vice president of offshore wind.

“Our team has worked diligently with key stakeholders and regulators while safely navigating through the coronavirus pandemic to complete this vitally important project that is a key step to reducing carbon emissions,” he said.

Dominion Energy says offshore wind is a key part of its plan to meet standards of the Virginia Clean Economy Act and to achieve net zero carbon dioxide and methane emissions by 2050.

U.S. Coast Guard helicopters approach the top of a wind turbine nacelle during a training exercise 27 miles off the coast of Virginia Beach, Va., in the Atlantic Ocean, Wednesday Oct. 14, 2020. The Coast Guard and Dominion Energy along with techs from manufacturer Siemens Gamesa collaborated to develop rescue capabilities and emergency response procedures. (AP Photo/Steve Helber)

Two wind turbines installed by Dominion Energy off the coast of Virginia have the capacity to generate electricity to power 3,000 homes.