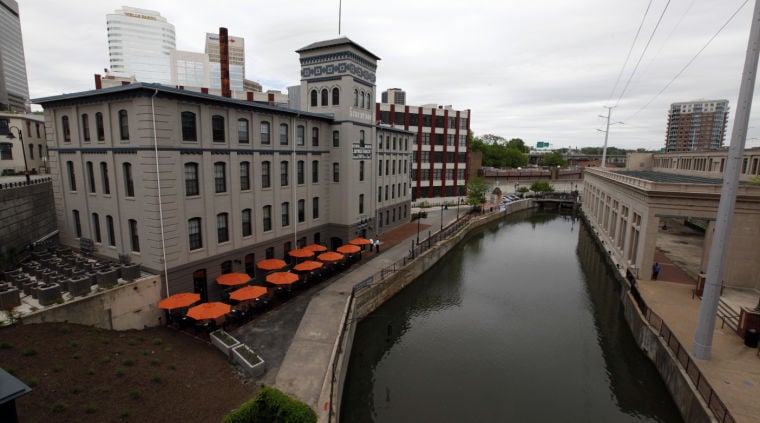 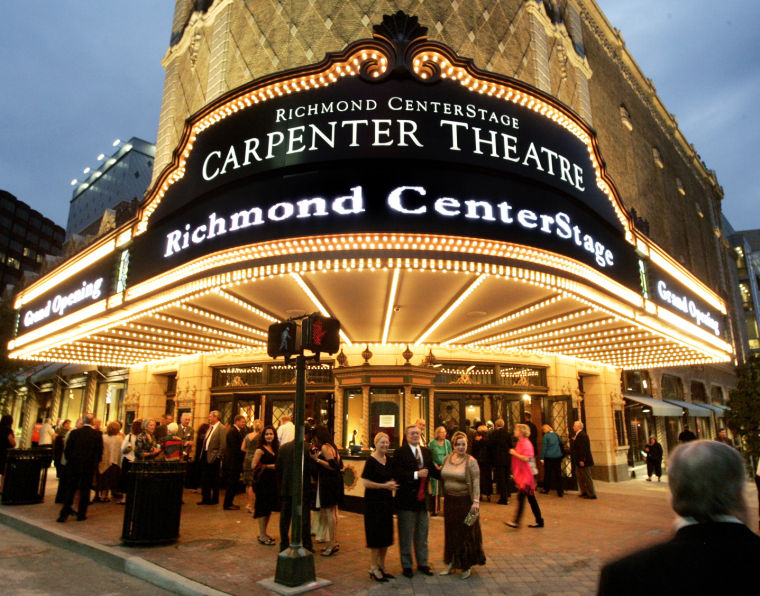 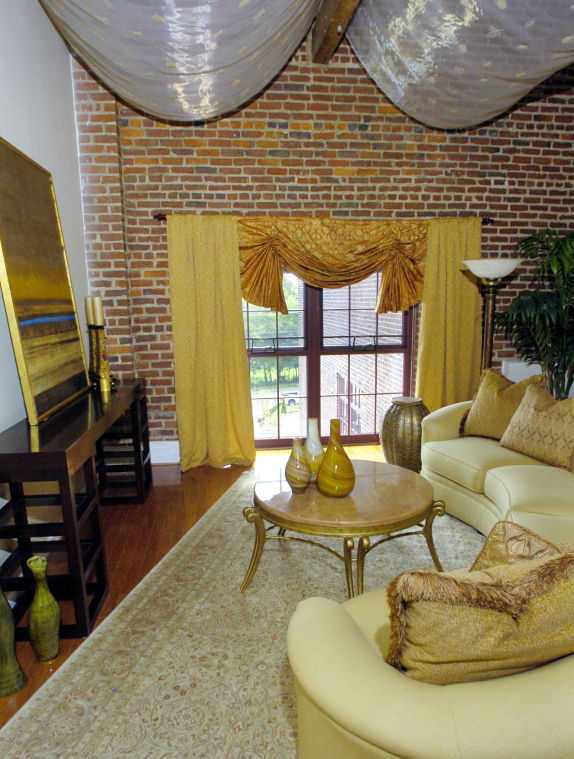 The Carpenter Theatre (top) and the Old Manchester Lofts (above) in Richmond were restored using historic tax credits.

If it weren’t for historic tax credits, whole sections of Cary Street in Shockoe Slip and Shockoe Bottom would be vacant.

Plant Zero, a cultural and residential center in Manchester, and other old buildings in that section of town south of the James River, many of them now chic and industrial reuse projects, would be just that — old.

The Hotel John Marshall would be shuttered with its red shag carpeting and mirrored walls in the lobby, not an upscale apartment building in downtown Richmond called the Residences at the John Marshall.

The music venue The National would still be closed. Movieland at Boulevard Square wouldn’t exist.

“Historic tax credits have been absolutely critical in the revitalization of downtown,” said Richard Gregory, whose company developed Plant Zero and is co-developing the former Reynolds Metals’ north site along the Haxall Canal.

For all the good they have done — putting old buildings back into use, prompting private investments and generating jobs — historic tax credits have proved tempting for a few who found ways to abuse the system.

“Every financial transaction has the potential for fraud,” Gregory said. “There are always people who abuse the system. … But it’s such a very, very small percentage and yet they get a lot of attention.”

Tax credits offset the cost of renovations, providing economic incentives for developers to invest in old buildings and take on projects.

“It costs more to renovate an old building than to build a new one, so the tax credit allows you to fill that gap,” said Gregory, who has done seven tax credit projects in Richmond and provided legal expertise on 40 in Virginia and North Carolina.

Without the credits, major historic rehab projects would not get done, he and other developers said.

The credits are used not only to preserve and rehabilitate buildings, but also to breathe new life into cities and promote economic revitalization, studies show.

“Richmond has a feeling of pride now; we are not shabby, we are changing,” Langan said, attributing the evolution to tax credits. “It is an amazing program that has done more for Richmond than any other program.”

Historic reuse projects help define a city and return a sense of character to a city, she said.

“These are people playing by the books and transforming our urban landscapes here in Richmond, across the commonwealth and across the nation,” Kilpatrick said.

“Are there bad actors? Sure. It’s in the nature of human beings. I have no solution for human nature,” she said.

The state agency has flagged four people for questionable practices to law enforcement officials in the 16 years since the state program has been in place, Kilpatrick said.

The four include two developers from Richmond and two from Chesapeake.

Richmond developer Justin G. French is serving a 16-year sentence for a tax credit scheme that defrauded the government and cheated more than 110 investors out of $11.2 million.

French was a business partner on at least one project with Billy G. Jefferson Jr., who was charged last month on eight felony counts related to about $2 million in tax fraud. He is scheduled to appear in court Tuesday.

The charges against Jefferson involve submitting false documents on four tax credit projects to the Department of Historic Resources. The projects were certified in 2012.

The owner of Historic Property Management, formerly River City Real Estate, Jefferson is one of the largest apartment owners in the Fan District.

He and French were business partners on a former Philip Morris cigarette factory in South Richmond that was converted into the Tobacco Factory apartments in the mid-2000s.

Eric H. Menden of Chesapeake was sentenced in September to 11½ years in prison for engaging in a $41 million bank fraud scheme that contributed to the failure of the Bank of the Commonwealth and for a separate historic tax credit scheme that cost state and federal governments more than $12 million and investors more than $8 million.

Menden admitted that he and his business partner, George P. Hranowskyj, submitted paperwork to the bank with inflated amounts owed to subcontractors and included work that was not completed. Hranowskyj was sentenced in October to 14 years in prison for carrying out elaborate fraud schemes.

“These were people engaged in cahoots with bank officials in a large-scale bank fraud in which tax credits were a component,” Kilpatrick said.

Kilpatrick would prefer to focus on the benefits of the program, not the few who figured out ways to scheme the system.

Still, French’s conviction had a material effect on the program.

Every site is now visited by an inspector before certification, Kilpatrick said. Prior to the French situation, site visits were not routine, she said. “It was more of a sampling.”

Also, the Department of Historic Resources will require that a certified public accountant conduct an audit of rehabilitation expenses. The agency is establishing standards for determining and reporting those expenses.

“It’s important to focus on how important the tax credits are for Virginia’s future and not on a few bad apples,” Kilpatrick said. “We need to keep our eye on the ball, which is economic, social and cultural vitality.”

The tax credit program is about restoring urban cores, reversing the loss of populations in cities and bringing people back downtown to live, play, work and shop, she said.

“This is really about breathing new life into cities and creating an economic benefit and long-time sustainable benefits,” Kilpatrick said.

Virginia’s program was established by the General Assembly in 1996.

Statewide, 2,048 projects were approved from 1997 through 2011, the latest figures available, said Kilpatrick, noting a lag period from the time a project is completed and the time it is certified.

The cost to Virginia in that period was $719 million in state tax credits. In essence, users of historic tax credit reduced their tax liabilities by that much.

Say a person was granted tax credits of $40,000 on a project and owes state taxes that filing year of $30,000. The credit reduces the taxpayer’s state taxes to zero, and the remaining $10,000 can be carried over to the next year.

The credits, in turn, have spurred private investments of $2.8 billion in rehabilitation expenses, contributed $3.6 billion to Virginia’s economy and generated 31,866 jobs through 2011, according to a study by Virginia Commonwealth University’s Center for Urban Development.

The numbers are conservative, because they include construction jobs during renovations, Kilpatrick said, not those created after projects are complete such as managing an apartment or running a theater.

Since the federal program’s inception in 1976, the National Park Services has certified about 38,700 historic buildings across the country, according to a study by Rutgers University.

From 1978 to 2012, $106.1 billion in rehabilitation investments generated about 2.4 million jobs nationwide and contributed $121.2 billion to the U.S. economy, according to the study.

The federal tax credit, like the state credit, is an expenditure.

“In short, the federal HTC (historic tax credit) is a good investment for local communities, individual states and the nation,” the study states.

“These tax credits are critically important,” said Robin Miller, who has collaborated on $125 million worth of rehabilitation and urban infill projects in Virginia, mostly in the Richmond area, since 1994.

“Without state and federal historic tax credits, these historic buildings would not have been saved,” Miller said. “Most probably would have been knocked down. They would not have been economically feasible to rehabilitate to Secretary of Interior standards,” he said, referring to construction requirements.

Standards include preserving the craftsmanship in a building and repairing rather than replacing historic features.

Miller and business partner Daniel A. Gecker, chairman of the Chesterfield County Board of Supervisors, are developing a 30-acre project in Manchester with 150 parcels of land.

Other major historic tax credit projects by Miller and Gecker include Old Manchester Lofts, Lee School Lofts, Linden Tower, One Monument Avenue and Kensington Court, all in Richmond, and the Western State Hospital project in Staunton.

Historic tax credit projects are done in the private sector in concert with the Department of Historic Resources and the National Park Service, Miller said, so it is an efficient program without a large bureaucracy.

“The program administered by the Department of Historic Resources is very efficient, effective and self-correcting,” Miller said, adding that the agency identified those that didn’t follow the rules.

“It’s a public/private partnership that saves buildings and creates jobs,” Miller said. “It’s unfortunate that some people appear to not be playing by the rules.”


SEARCH FOR A PROPERTY

Enter all or part of the property's name, address or owner's name to search for information about that property

A map and database of properties that used historic tax credits to help pay for renovation.

Properties in the Richmond areas that have received historic tax credits.

The Carpenter Theatre (top) and the Old Manchester Lofts (above) in Richmond were restored using historic tax credits.