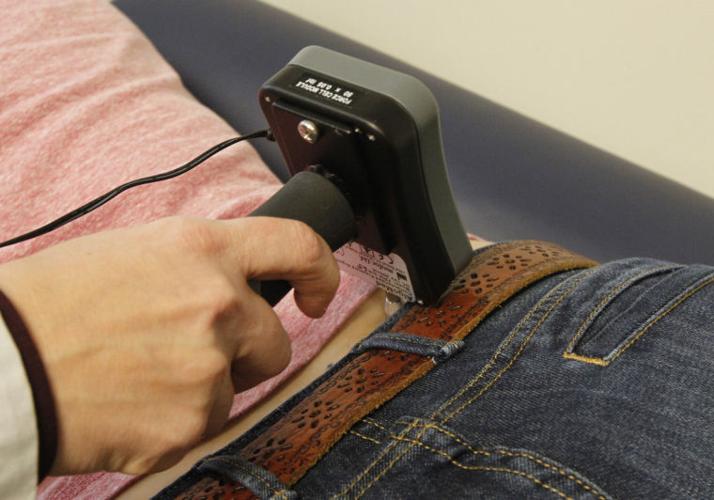 Dr. Angela Starkweather uses a pressure indicator to measure a test subject for her lower back pain study at the Nursing Building on the campus of the VCU Medical Center. 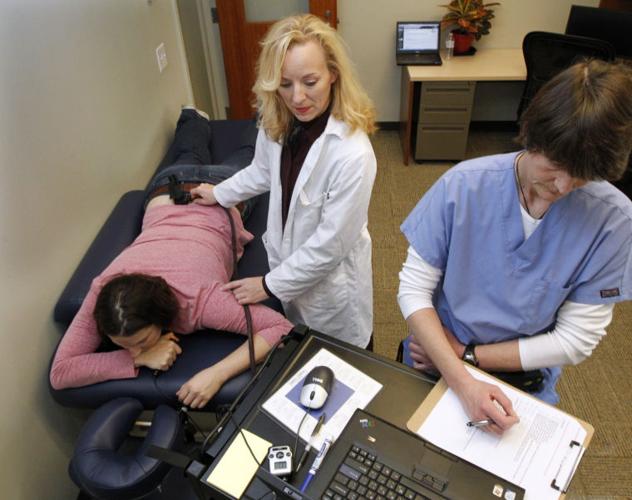 Why, wondered neuroscience nurse Angela Starkweather, did some patients still have pain?

She was referring to patients she has cared for in hospital trauma and neurosurgery units over the years. Despite undergoing extensive surgeries, some patients still complained of pain.

“It drove me crazy because we are doing everything we can; why are they still having (pain)?” Starkweather said. “I saw so much variation in patient outcomes, particularly regarding post-surgical pain and response to pain treatments.”

Starkweather, an associate professor of nursing at the Virginia Commonwealth University School of Nursing, is trying to find answers, shifting into the role of scientist-researcher as the lead investigator on a three-year $1.2 million National Institutes of Health grant to study low-back pain.

The multiple roles of nurses as bedside caregivers, as classroom educators and as hospital unit managers and administrators are well-known, but outside academic circles there is less recognition of the role of nurses as researchers — scientists adding knowledge about health, wellness and disease.

In a small room in the VCU School of Nursing building, Starkweather and registered nurse Amy Heineman, project director for the research, have a lab set up for the study. There they measure the responses of patients who have had recent episodes of low-back pain — at the T-10 vertebrae or lower — to various stimuli.

“We are looking at our somatosensory system — our pain sensation system — to look at if there are changes over the course of the acute low-back pain (episode) that would predict” whether a person will go on to develop chronic lower-back pain, Starkweather explained. Her hypothesis is that there are some people prone to have that happen, and it may be that “genetics are actually causing some people to have a chronic trajectory of pain,” she explained.

Registered nurses, because of their background in the health sciences and training as hands-on, front-line providers, are in a position to identify patient-care issues and look for solutions, say leaders at the National Institute of Nursing Research, a division of the National Institutes of Health.

“As the largest group of clinical practitioners in the U.S. health care workforce, nurses are uniquely positioned to make important contributions to improving health and quality of life,” said Dr. Patricia A. Grady, director of the federally supported National Institute of Nursing Research, in an email interview.

“Unlike their counterparts in other fields of the health sciences, nurse scientists focus more closely on person-centered prevention, treatment and coping interventions, rather than developing pharmacological treatments for specific diseases,” for instance, Grady said.

Of the estimated 2.9 million registered nurses in the United States, about 1 percent have a doctorate, according to a 2010 Institute of Medicine report titled “The Future of Nursing: Leading Change, Advancing Health.” The report says there is a “continuing shortage of nurse scientists.” A doctorate is generally needed to win research grants and to do independent research.

But for multiple reasons, including career interruptions and the higher salaries to be made in clinical practice versus academia, relatively few nurses are on track to become Ph.D-trained nurse scientists. Also, according to the Institute of Medicine report, many nurses enter the profession through diploma and associate degree programs and face a longer road to a Ph.D. than graduates of four-year baccalaureate programs.

There are efforts to get more nurses in the research pipeline. The National Institute of Nursing Research has fellowships, career development awards and loan repayment programs.

A new book, “Anatomy of Research for Nurses,” adds to the discussion, providing tips for front-line nurses who want to do research in the clinical setting — in hospitals, clinics, wherever patients are seen.

“(The program) was created in order to help launch the careers of academic nurses in terms of actually providing research support and also salary support as well as leadership training,” said Jacquelyn Campbell, national director of the Nurse Faculty Scholars program and a professor at the Johns Hopkins University School of Nursing.

“The award is for three years. It’s $350,000 over the three years, so it’s considerable funding and enables nurse scientists to really do some excellent foundation research that can launch their careers,” Campbell said. The program has 36 scholars enrolled, while 42 have completed the program.

Campbell said having nursing faculty engaged in research benefits universities in multiple ways. The nurses are making discoveries. They are exposing students to the latest developments in a field. They are winning big grants, which supports the university infrastructure and enhances reputation.

“You see the same thing in other disciplines, where a big part of the enterprise of the university is the research enterprise,” said Campbell, a registered nurse with a doctorate who also has an academic appointment with the Johns Hopkins University Bloomberg School of Public Health.

“Nursing science is an incredibly important addition there because nursing really looks at the whole person. So we consider physiological issues in terms of health problems, as well as psychological components, which is a big part of any health problem. We also are very concerned with vulnerable populations, ending health inequities. Some of our nurse scientists, including some of the Nurse Faculty Scholars, are actually doing physiological research in the lab, but they are very concerned with how that translates to the bedside and to the community.”

Nurses doing research is not new, said Karen Rose, an associate professor of nursing and assistant dean for innovation at the University of Virginia School of Nursing.

Rose points to Florence Nightingale, considered the founder of modern nursing, as an example. Nightingale kept statistics on the war-wounded in the Crimean War and used that data to push for changes, including better sanitation, in hospitals.

“We have a rich history in our profession of conducting research,” said Rose, who has a two-year $428,269 grant to study incontinence in Alzheimer’s patients.

“I’m looking at those three symptoms – agitation, sleep disturbance and urinary incontinence – because we believe there is a relationship, though no one has ever measured it,” Rose said. “And those are the symptoms, too, that family members say are the ones that are tipping points for why they finally say, ‘I can’t take care of my loved one anymore. They’ve got to go into a nursing home or institution.’ We think the findings of this study will have real-life implications.”

The study is done in families’ homes, Rose said. Alzheimer’s patients’ nighttime agitation and sleep habits will be monitored with wireless sensors.

“Based on what I find out, I would likely then construct another trial that would try to address that finding, try to intervene … how do we put this into action at the bedside,” Rose said.

Mentoring is critical to research success, said Linda Bullock, associate dean for research at the U.Va. School of Nursing. Bullock is on a team that has won a $4 million five-year research award that is focused on domestic violence.

“I think I have been a successful researcher because I have had some excellent mentors in the past. … You come out of a Ph.D. program with a Ph.D., but you really don’t even know the landscape,” Bullock said.

U.Va. doctoral nursing student Esther Thatcher in December defended her dissertation, a project on dietary patterns, health and food access in rural Appalachian communities in Southwest Virginia. Her first grant application was rejected. She rewrote it and tried again, successfully. Mentors were invaluable in helping her navigate the process.

VCU assistant professor of nursing Candace Johnson’s research has focused on the practice of yoga and African dance by African-American women. Johnson has a master’s degree in public health and a Ph.D. in nursing — tools she said will allow her to combine her interests in researching and addressing health disparities.

“I want to move this research forward and see if one or the other has an impact on (body mass index), blood pressure, cardiovascular risk,” Johnson said.

Starkweather, who continues to practice as an acute-care nurse practitioner in emergency and urgent care, hopes to enroll 220 people in the next 2½ years in the low-back-pain study. She is working with researchers at the University of Maryland’s Center for Pain Studies and others at VCU.

The study has implications for health care costs, Starkweather said. Low-back pain, according to some estimates, is second only to colds and flu for what sends Americans to the doctor. According to the National Institute of Arthritis and Musculoskeletal and Skin Diseases, in a three-month period, about 25 percent of U.S. adults will experience at least one day of back pain.

“We are looking at the people who have it spontaneously resolve, which is great, because that’s 90 percent of the population,” Starkweather said. “It’s that 10 percent that drives up costs. They continually use our health care system because of that chronic pain.”

What: Study on low-back pain funded by the National Institutes of Health

Where: VCU School of Nursing

Details: 220 study participants are being recruited. Eligibility criteria includes: ages 18-50 and have experienced low-back pain over the last 24 hours that has not lasted for more than four weeks. Excluded: pregnant women or three months post-partum, people who have had lumbar spinal surgery, people who have weakness in the legs or who have chronic pain in the lower back or somewhere else in the body.

Sunday Q&A: Jean Giddens, dean of the School of Nursing at VCU

In her first months on the job as dean of the Virginia Commonwealth University School of Nursing, Jean Giddens met one on one with all of the …

Dr. Angela Starkweather uses a pressure indicator to measure a test subject for her lower back pain study at the Nursing Building on the campus of the VCU Medical Center.