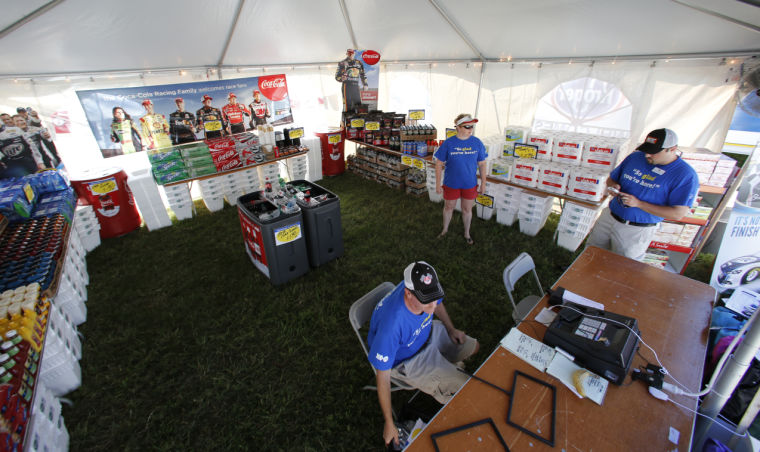 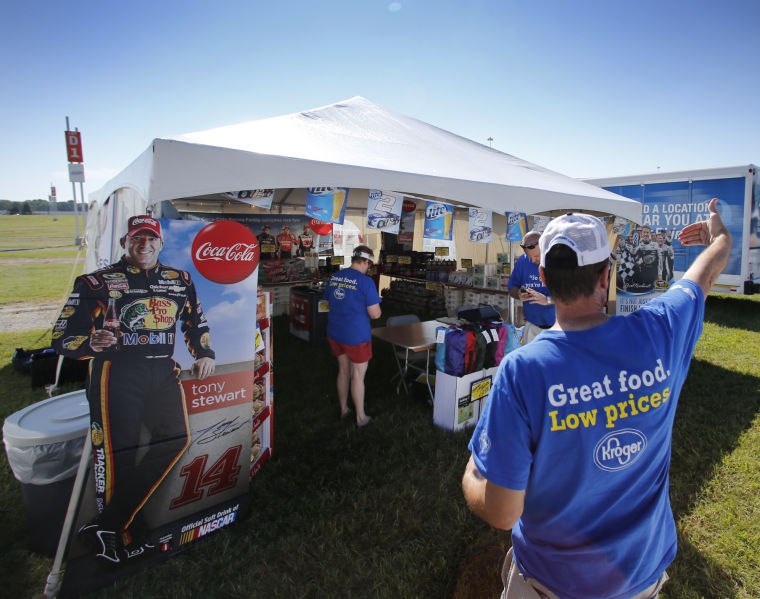 While Kroger’s tent is new for RIR, grocery chains already offer the concept at tracks in Arizona, Texas and Delaware.

You can even get a charcoal grill there, and charcoal, or a propane tank to fuel your own grill.

In short, the 400-square-foot store sells the kinds of things people need for a tailgate party.

RV campers have been settling in since early this week and there are spaces for 1,600 of them on the RIR grounds. By next spring, the track expects to have 2,000 RV parking slots.

As time for a big race nears, the traffic crush makes it difficult to get away from the track for supplies and then come back. By the time the green flag waves Saturday at the ¾-mile track, there could be more than 80,000 people in the stands (NASCAR doesn’t publicize attendance figures, but capacity is 94,063).

A lot of those people arrive hours before race time, and a lot of them could become Kroger customers.

“We’re hoping we’ll be swamped, this time, and then we’ll come back with a bigger store for the spring race,” said Kroger grocery coordinator Ellie Holden, who, along with marketplace specialist Ron Dean and four assistants, were stocking the store Wednesday.

The store is under a tent in the track’s parking lot D – in the shadow of the grandstand’s tallest tower, just across the fence from the complex’s Classic Amphitheater.

The introduction of the on-grounds store is being treated by Kroger as a test.

Near the tent store will be trailers with general supplies, ice and propane tanks. “And we have a nearby store that can back us up if we run out,” Holden said.

When Kroger comes back in the spring, Dean said, the company hopes to have a delivery service. RV users will be able to order goods to be delivered via golf cart.

The on-grounds-store concept is new to RIR, but not to the racing world.

Fry’s Food and Drug Stores, a grocery chain operated by Kroger, has set up a store at a NASCAR track in Arizona. Tracks in Texas and Delaware also have on-grounds stores operated by other chains.

“They bring stuff, but they also need things after they arrive. It’s a chance for us to serve customers who know us and shop with us,” he said. “But it’s also a chance to introduce ourselves to new customers who haven’t shopped with Kroger.”

Dover International Speedway in Delaware has a 2,400-square-foot tent store on a concrete slab operated by the Acme Markets grocery chain.

“The fans have embraced it,” Dover speedway CEO Dennis McGlynn said. “We get calls from people checking to make sure we’ll still have the store the next time they come. It’s part of what race tracks are doing now to make the fan experience as pleasant as possible.”

Acme President Jim Perkins said ice is the biggest seller at the track store. He said the store opens at 6 a.m. and does a big coffee business.

RIR Director of Business Development Louis Gilmore said he has observed the success of the Dover store, and that was part of what inspired him to invite Kroger to the Richmond track.

“We’ve had a relationship with Kroger for years,” Gilmore said, “and we look for ways to build value into the relationship.

“This seems to be the right fit for the track and the store,” he said. “They promote their brand and their customer service. We give our fans an extra level of convenience.”

Gilmore said that with the small Kroger store “we’ll get our toe in the water…. We can see this really growing.”

Kroger could take the idea to other tracks, he said.

For instance, Martinsville Speedway President Clay Campbell might be interested, he said. “Clay will get to see first hand what we’re doing this weekend. He might want to have his own store.”

Kroger plans to expand into a new part of the central Virginia market with its first Tri-Cities store.

Racegoers will need to look no further than Kroger’s tent store at Richmond International Raceway this weekend for all of their race-day needs.

While Kroger’s tent is new for RIR, grocery chains already offer the concept at tracks in Arizona, Texas and Delaware.