Life is vastly different these days at Richmond International Airport, where passenger traffic is down nearly 95% compared to a typical day
0 Comments
Share this
1 of 11

At Richmond International Airport, passenger traffic plunged 96.4% in April compared with the same month a year ago as airlines reduced flights by historic levels. 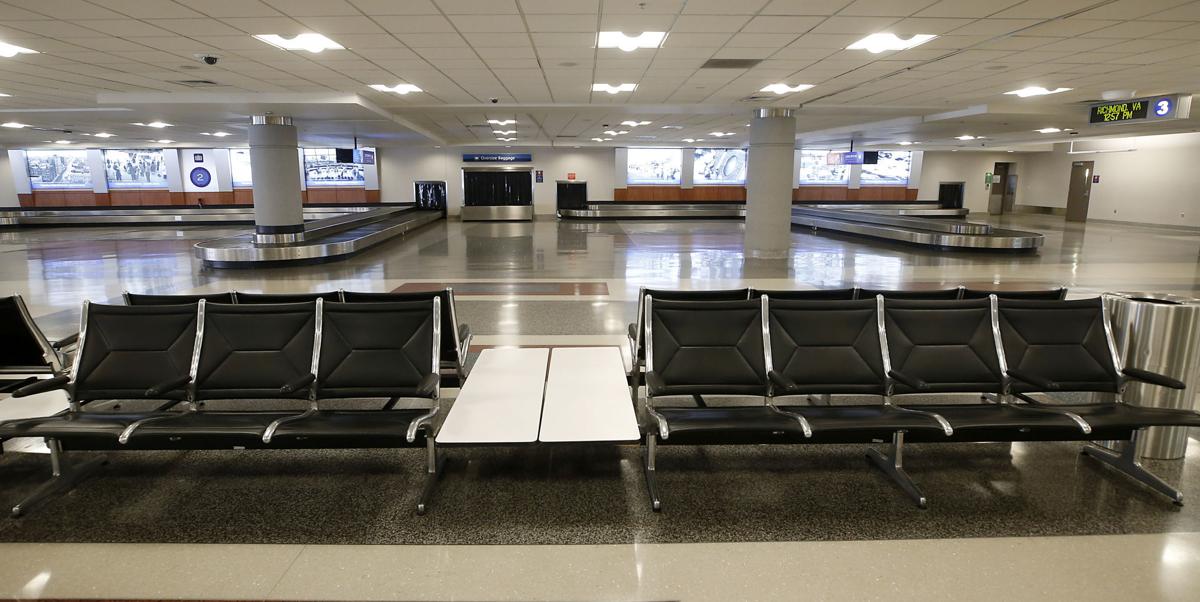 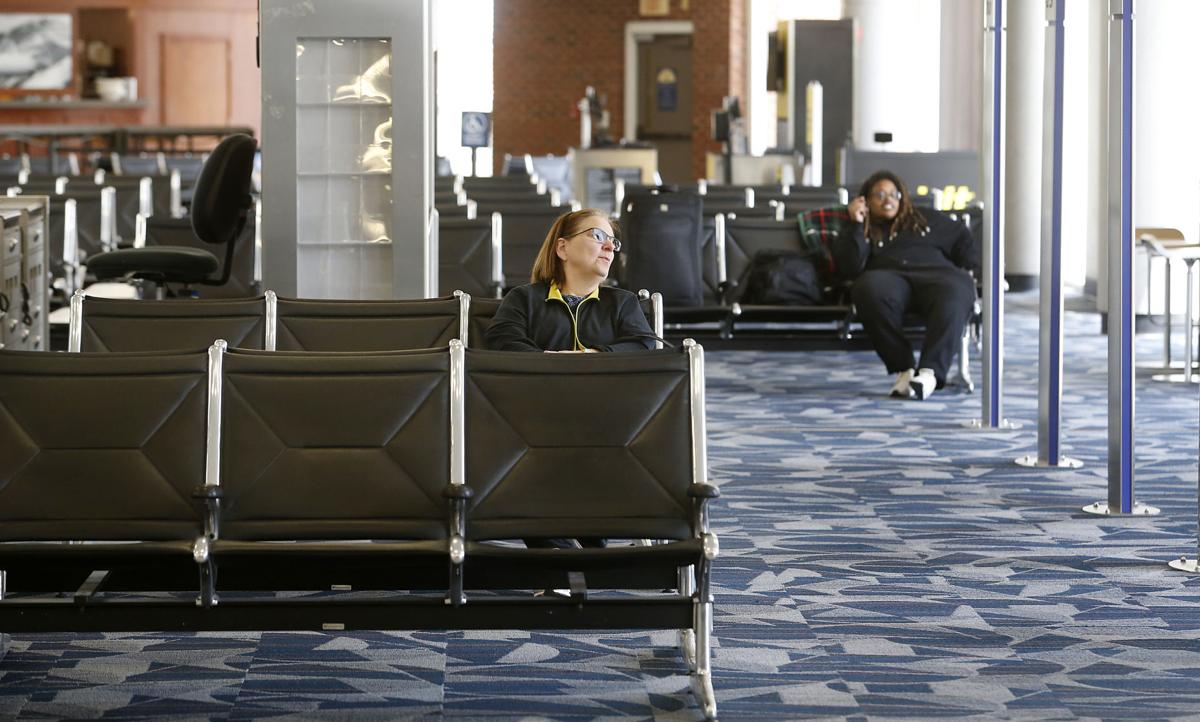 RIC passenger traffic for the entire month of April was what the airport typically serves on a daily basis. 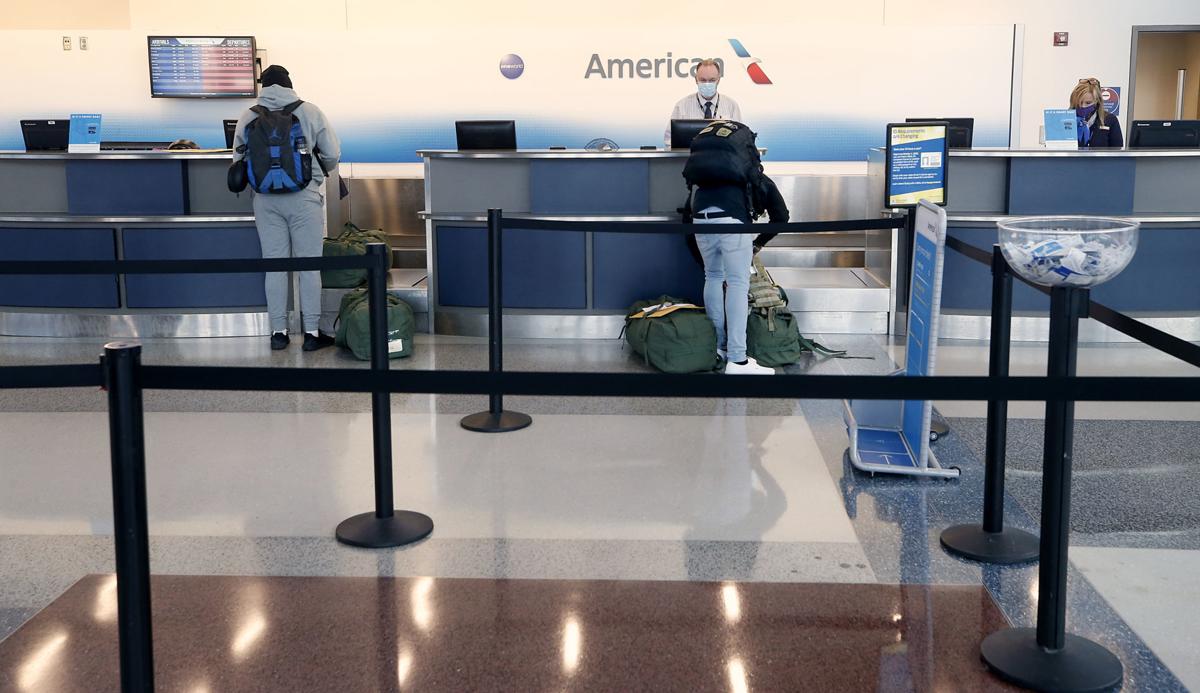 Passengers kept at safe distances while checking in to their flights Wednesday. 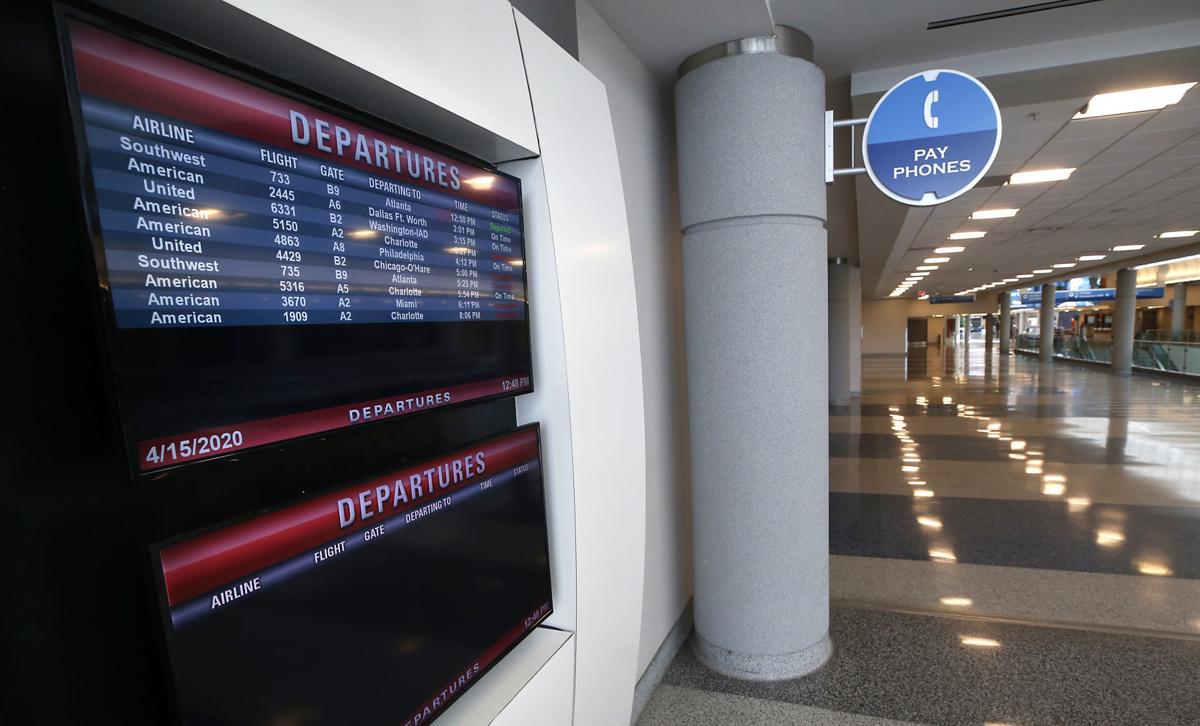 Departures, including cancelled flights, are listed at Richmond International Airport for Wednesday, April 15, 2020. 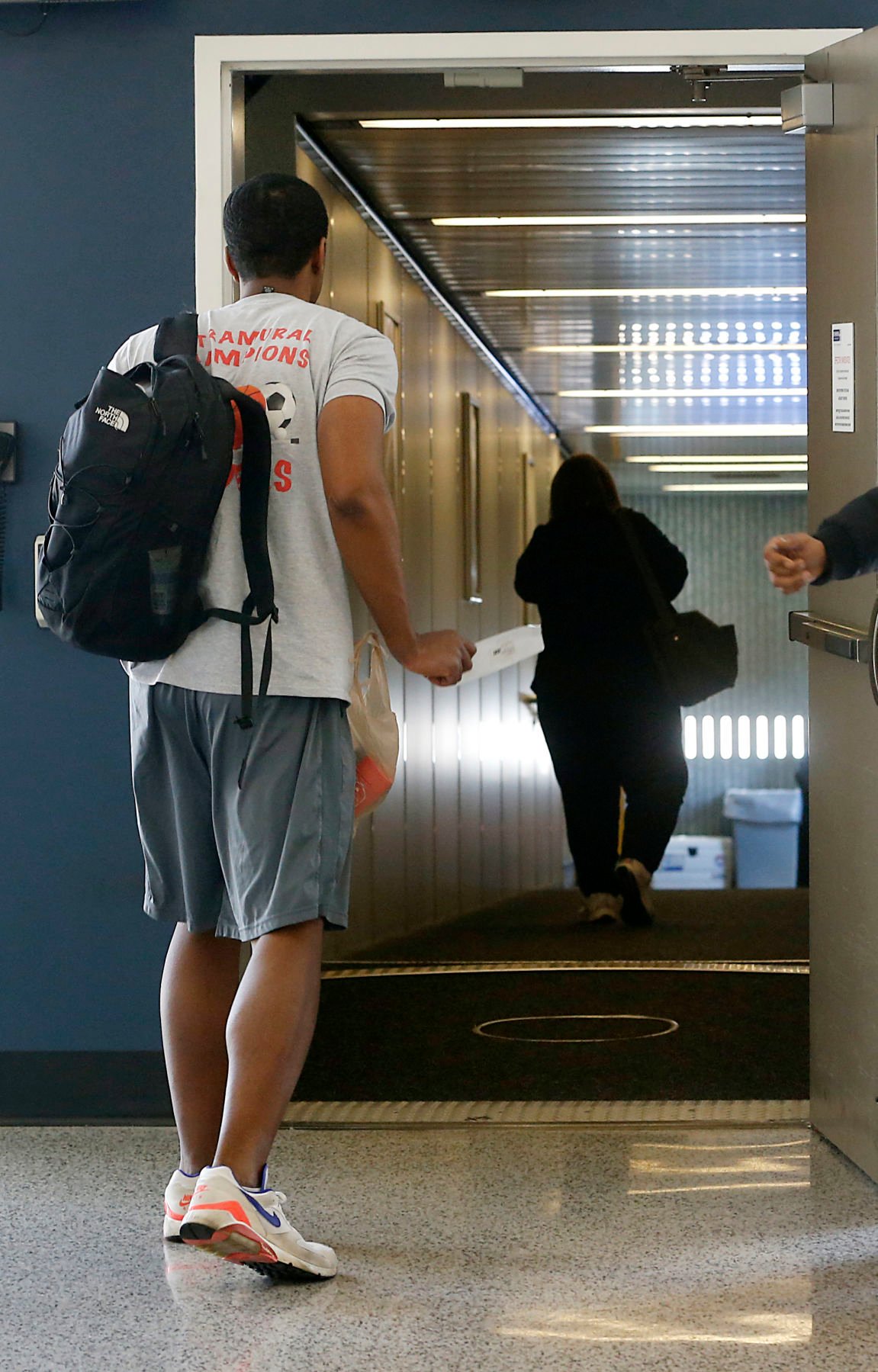 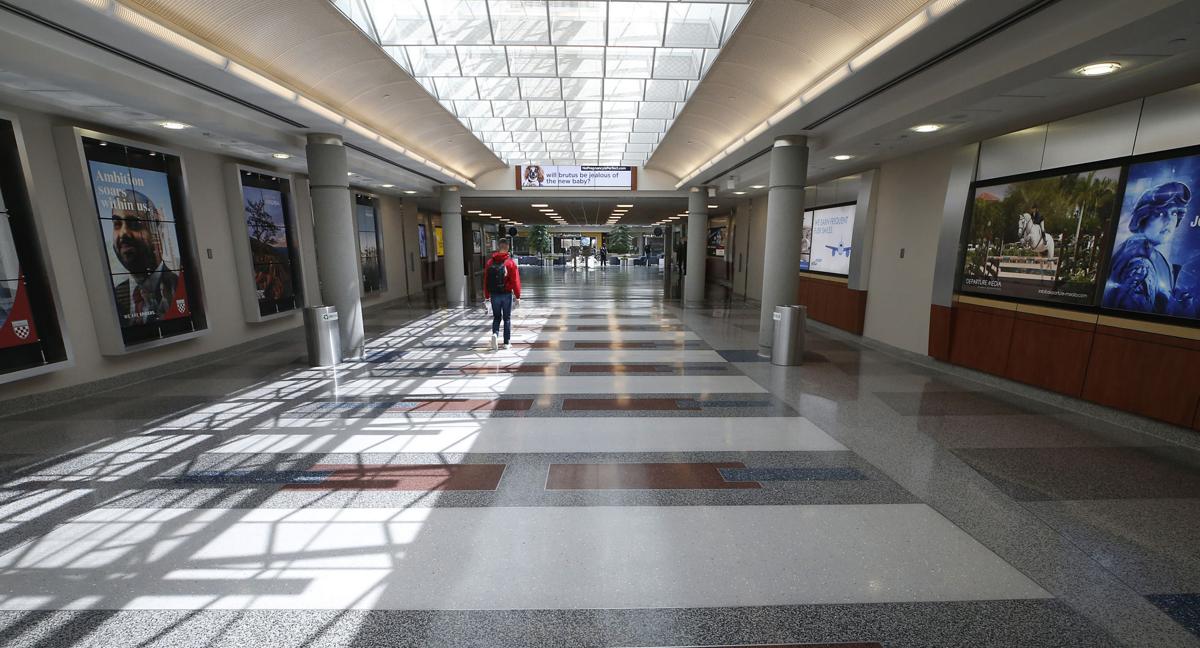 In April, 13,550 passengers used Richmond’s airport, which is how many would typically be served per day. 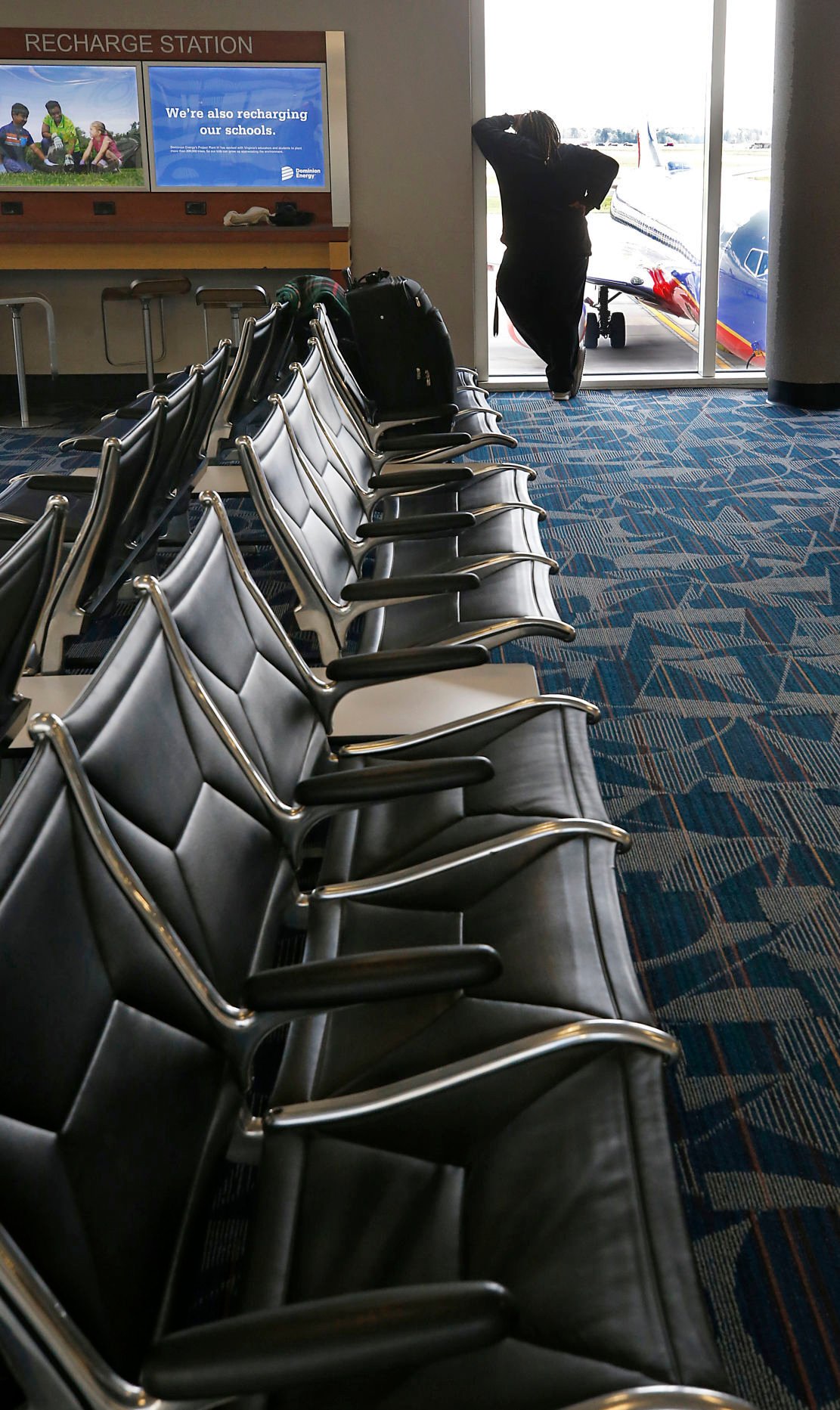 A passenger waits to board a flight at Richmond International Airport Wednesday, April 15, 2020. 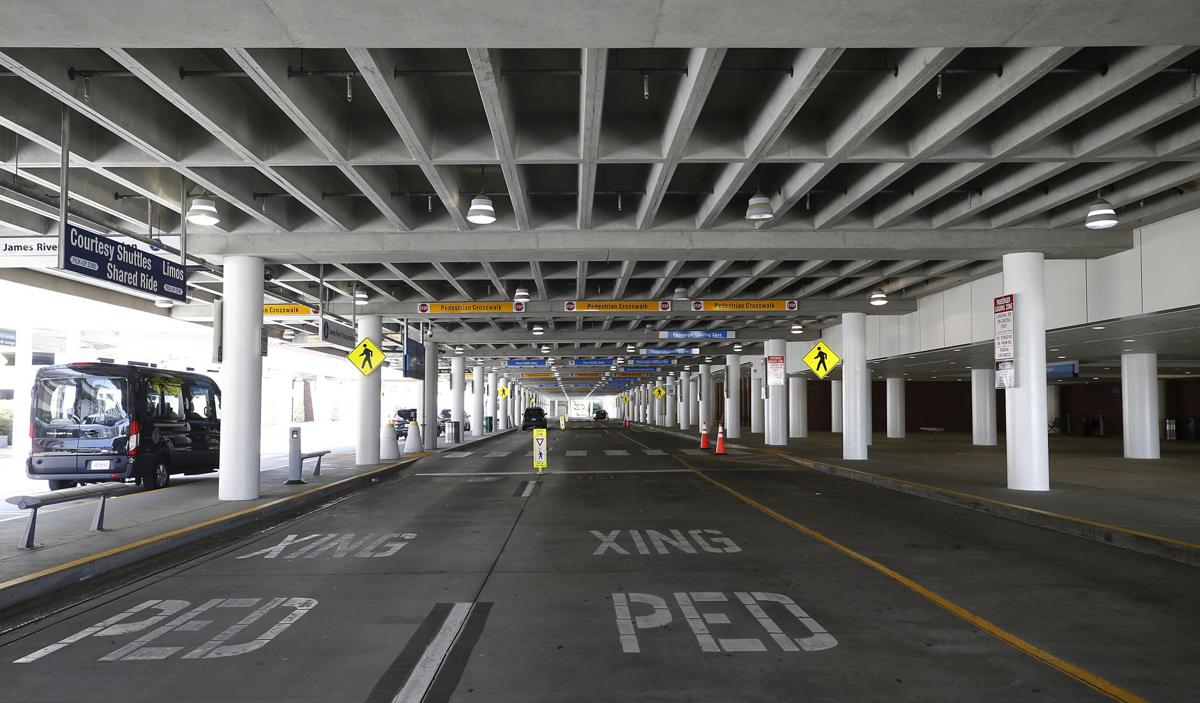 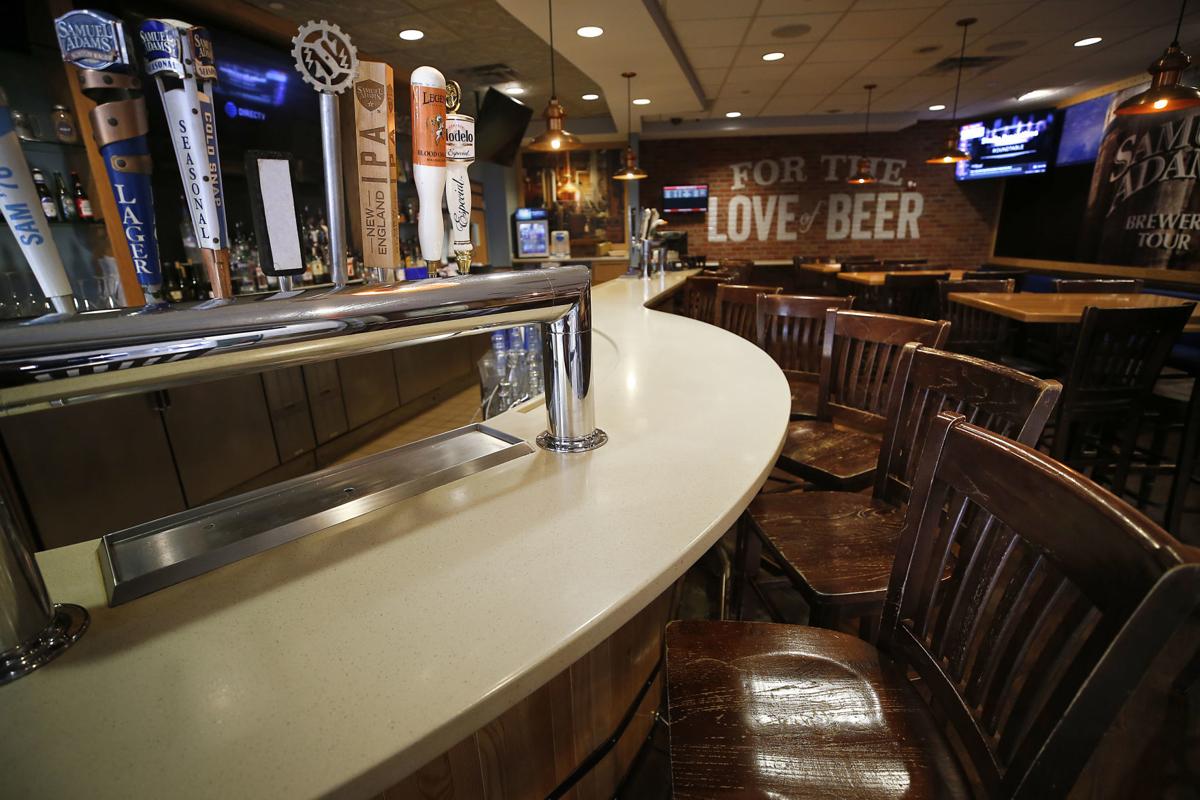 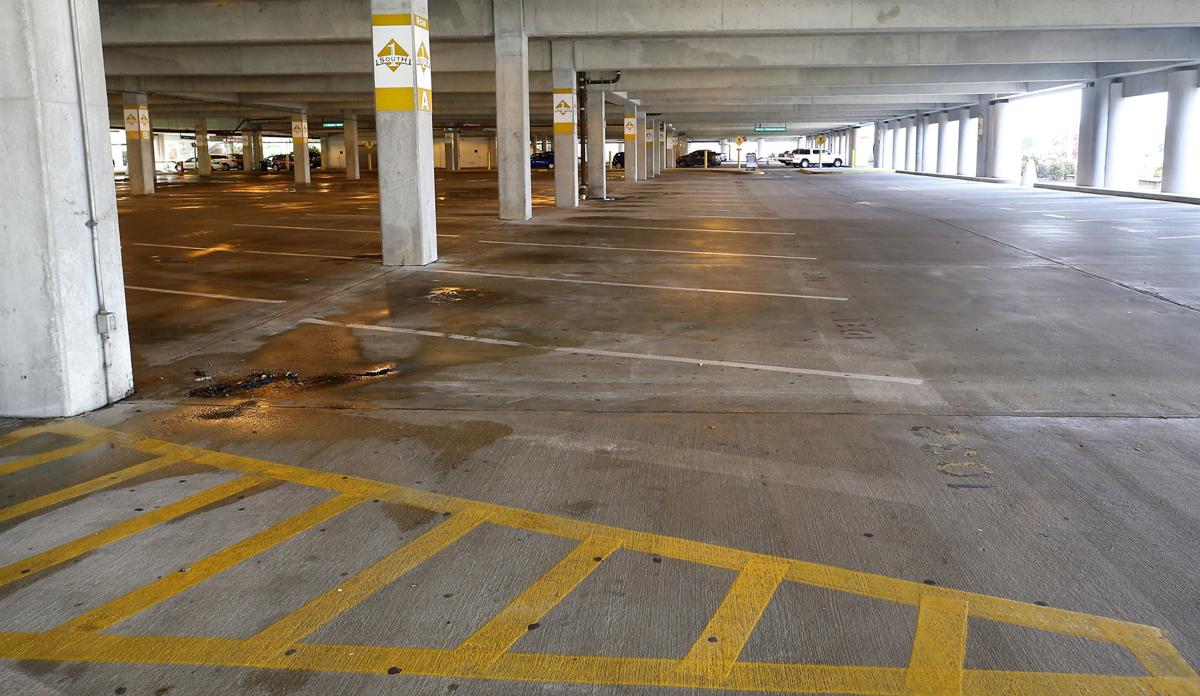 Across from the American Airlines check-in counter at Richmond International Airport on Thursday, Dondi Jeffers instinctively opened and closed his flip phone with gloved hands.

The last call he received was two hours earlier. The call before that was nearly 12 hours prior. With airport passenger traffic drastically declining following the coronavirus pandemic, those may be the only two calls he receives within a 24-hour period.

As an airport shuttle driver for the Hyatt Place Richmond Airport hotel, Jeffers has seen business drop by 90%. He used to make a steady $100 a day in tips. Now, he’s lucky if he walks away with $10 and drives two flight crews.

“We’re all suffering from the airport being slow like this,” he said.

His longtime friend and fellow driver, Roy Dawson, nodded and adjusted his blue surgical mask. He’s only making $10 a day in tips, too.

Richmond International Airport is one of hundreds of airports across the country experiencing dramatic declines in travel. With the Centers of Disease Control and Prevention advising against nonessential flying due to increased chances of COVID-19 spread, the aviation industry is collapsing.

In recent weeks, passenger traffic at Richmond International is down about 95% compared to a typical day, said Troy Bell, the airport’s spokesman.

On any given April day, Richmond International would have seen upward of 14,000 people passing through, Bell said, and most seats would be filled with business and leisure travelers. Now, the airport sees fewer than 600 travelers daily.

This past Thursday afternoon, Bell pointed to the four screens showing airlines’ arrival and departure times right before the security checkpoint. Only two screens were filled, and of those flights — a varied list of planes arriving and departing from Atlanta, Washington and Chicago — half were canceled.

A few months ago, the screens displayed more than 180 flights per day. The airport now has around 60 flights scheduled, with maybe 30 of them actually departing or arriving.

The flight crew moved her and the other five passengers to first class, a different setting to seep in the silence that comes with traveling during a pandemic.

A nurse at HCA Healthcare’s John Randolph Medical Center, O’Neal was returning from Milwaukee, where she was contracted to help with the COVID-19 response.

In two weeks, she’ll head to New York, one of the states most ravaged by the coronavirus.

“It hasn’t hit yet for me. Being prepared for the worst is kind of our thing,” she said.

Camouflage military bags are seen intermittently, perched on a charging station table or slung onto the back of someone headed toward a flight. One of those active-duty service members was Terrence Davis, who, with limited food options and multiple canceled and delayed flights, had a Zaxby’s meal delivered to the airport’s top floor.

He was headed home to South Carolina after completing training at Fort Lee outside of Petersburg. It was about to be his first time on a plane.

By 4 p.m. Thursday, the entire Concourse B at the terminal’s southern end had only seven passengers spread across four gates, awaiting a 5 p.m. United flight to Chicago.

One of them was Liset von der Lippe, who sat wearing her N95 mask at Gate B3, anticipating the first of three United flights to Honduras, her home country. She was supposed to return on March 24 after arriving in Richmond in late February to take care of her husband’s mother, who at 90 is in declining health.

Then the Honduran government closed its borders and shut down all airports on March 16.

After speaking to the Honduran Embassy, the first available flight out was to Chicago on Thursday afternoon, with a layover Friday morning in Houston — the final stop before reaching the Central American country.

“This is the only open window we have for a while to get home,” she said in Spanish, clutching her chest. “It doesn’t matter if it only has four walls. It’s your home. I can finally be home.”

But now, one of the loudest noises at the airport comes from the rolling wheels of a cleaner’s cart screeching slightly against the marbled floors.

One cart, run by Deborah Mallory, was parked beside the banisters that serve as the airport’s centerpiece and feed into a set of escalators. She methodically swipes disinfectant wipes along the rails before heading to the bathrooms and the outside seating areas. It’s been quiet, she said, but passengers depend on people like her to keep the airport running.

“It’s just wonderful to have a job,” she added. She knows others aren’t so lucky.

In between the two concourses, the Applebee’s, Caribou Coffee and Hudson News convenience store that would greet passengers before they passed security were now shielded with icy, metallic bars, keeping everyone out.

Only the TSA checkpoint at the entrance to Concourse B remains open, meaning travelers on American Airlines and JetBlue Airways flights — who depart from Concourse A — funnel through the Concourse B security before being escorted to their gate.

The only shops open in Concourse B were Hudson News and Caribou Coffee. Even those are expected to close by 5 p.m.

“Everything, at least temporarily, has been wiped out that you’ve accomplished over the last several years,” said Bell, who’s been at the airport for 20 years. “I was here for 9/11. I was here for the recession. … It was nothing like this.”

With the coronavirus, unlike Sept. 11, there is no bad guy, Bell added.

“You could do everything right and still catch this disease,” he continued.

Around 5:30 p.m. on Thursday, next to the second floor exit from the airport, driver Dawson is where he was hours earlier. No new customers.

He used his gloved fist to prop up his dozing head, his mask still covering the bottom half of his face. Dawson perked up for a moment and checked his bus to see if any new riders had shown up, needing help with their bags.

He’s waiting for a call that might not come.

If you must fly, here are some tips from the Transportation Security Administration for traveling during the pandemic.

Bring hand sanitizer with you: TSA is now allowing one liquid hand sanitizer container, up to 12 ounces per passenger, in carry-on bags. They will be screened separately.

Wear a mask if you like: Travelers are allowed to wear masks during the security screening process. A TSA officer may ask the traveler to adjust the mask to visually confirm their identity while checking travel documents.

If your license expired on or after March 1, don’t worry: TSA will accept expired driver’s licenses or state-issued identification a year after expiration or 60 days after the duration of the emergency, whichever is longer. The new deadline for obtaining a driver's license compliant with REAL ID has been delayed a year until Oct. 1, 2021.

Place items from your pockets into your carry-on bag: That way you don’t have to place them in a bin.

At least 3 more Richmond restaurants - including Brio at Stony Point - have permanently closed; 94% of Va. restaurant owners have laid off workers

Gov. Ralph Northam announced Monday the creation of a work group that will focus on improving COVID-19 testing in Virginia, after a week that …

At Richmond International Airport, passenger traffic plunged 96.4% in April compared with the same month a year ago as airlines reduced flights by historic levels.

RIC passenger traffic for the entire month of April was what the airport typically serves on a daily basis.

Passengers kept at safe distances while checking in to their flights Wednesday.

Departures, including cancelled flights, are listed at Richmond International Airport for Wednesday, April 15, 2020.

In April, 13,550 passengers used Richmond’s airport, which is how many would typically be served per day.

A passenger waits to board a flight at Richmond International Airport Wednesday, April 15, 2020.