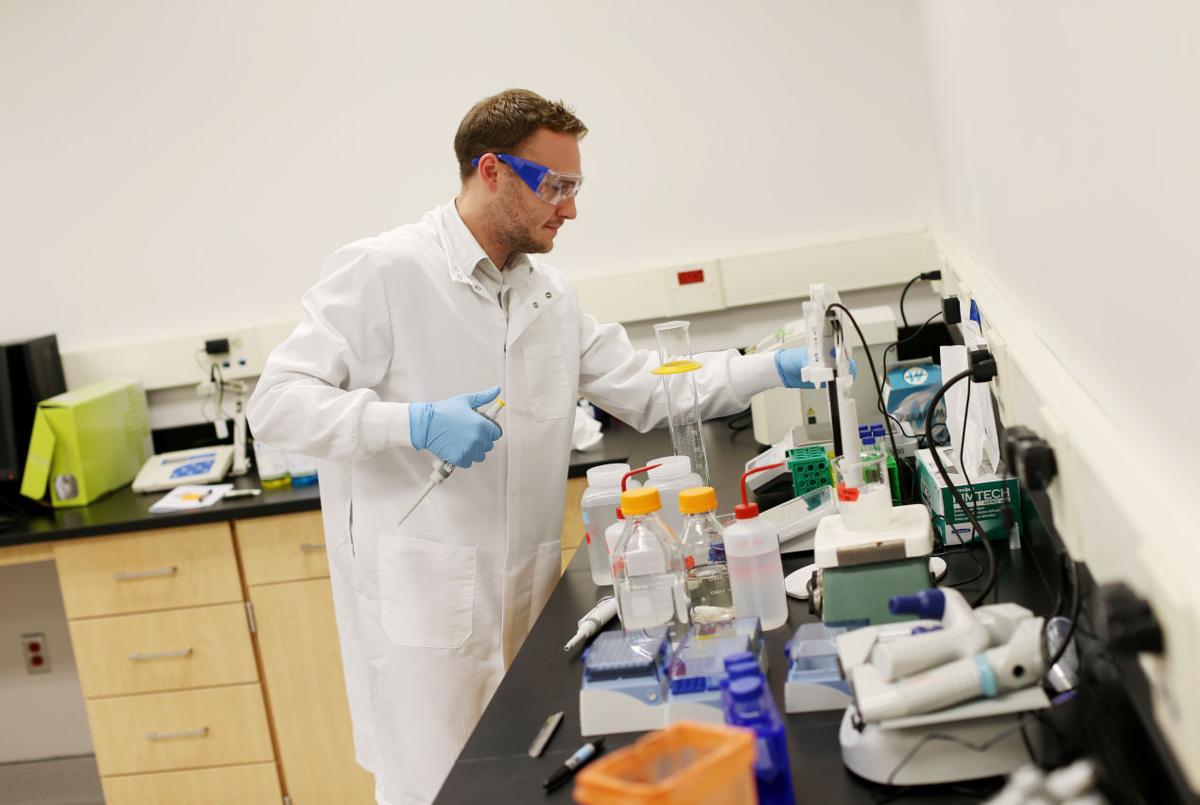 Lab technician Joseph Green worked on testing for traumatic brain injury at ImmunArray in Richmond in October. ImmunArray has offices in the Virginia Biotechnology Park in Richmond and in Rehovot, Israel. 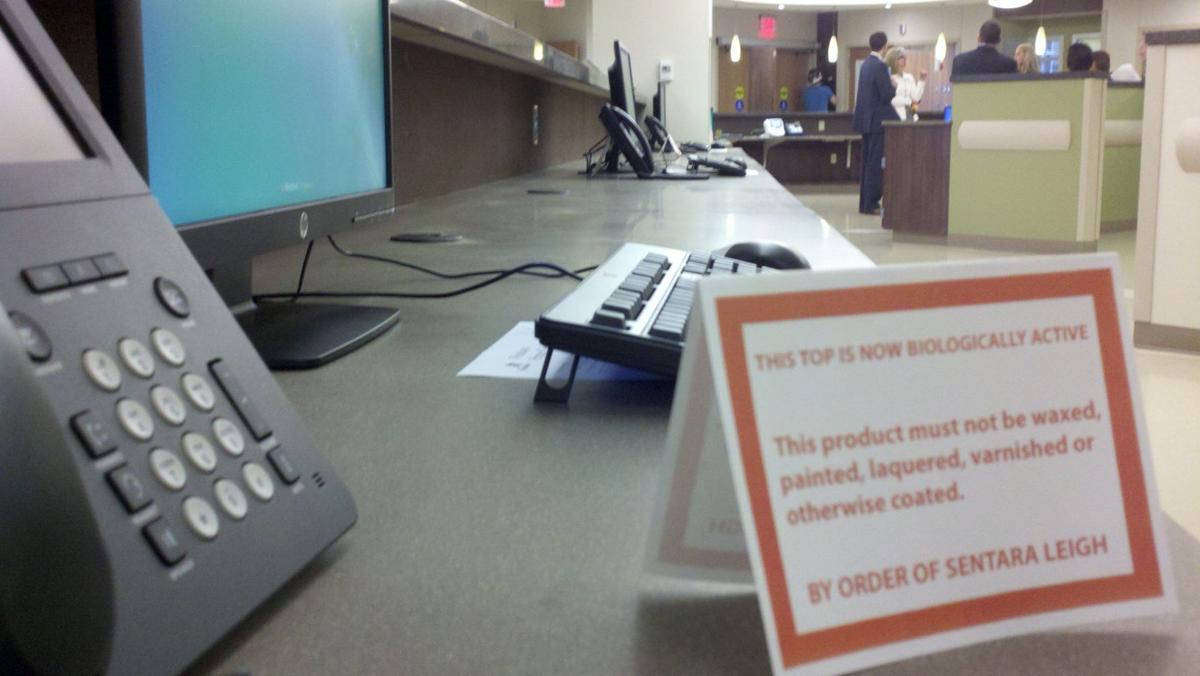 Sentara Healthcare has chosen the its Sentara Leigh Hospital in Norfolk to test the effectiveness of anti-microbial surfaces and materials developed by the Richmond-based company Cupron Inc. The interior shots are of countertops and a bathroom sink at the hospital, made with Cupron's copper-infused, anti-microbial materials 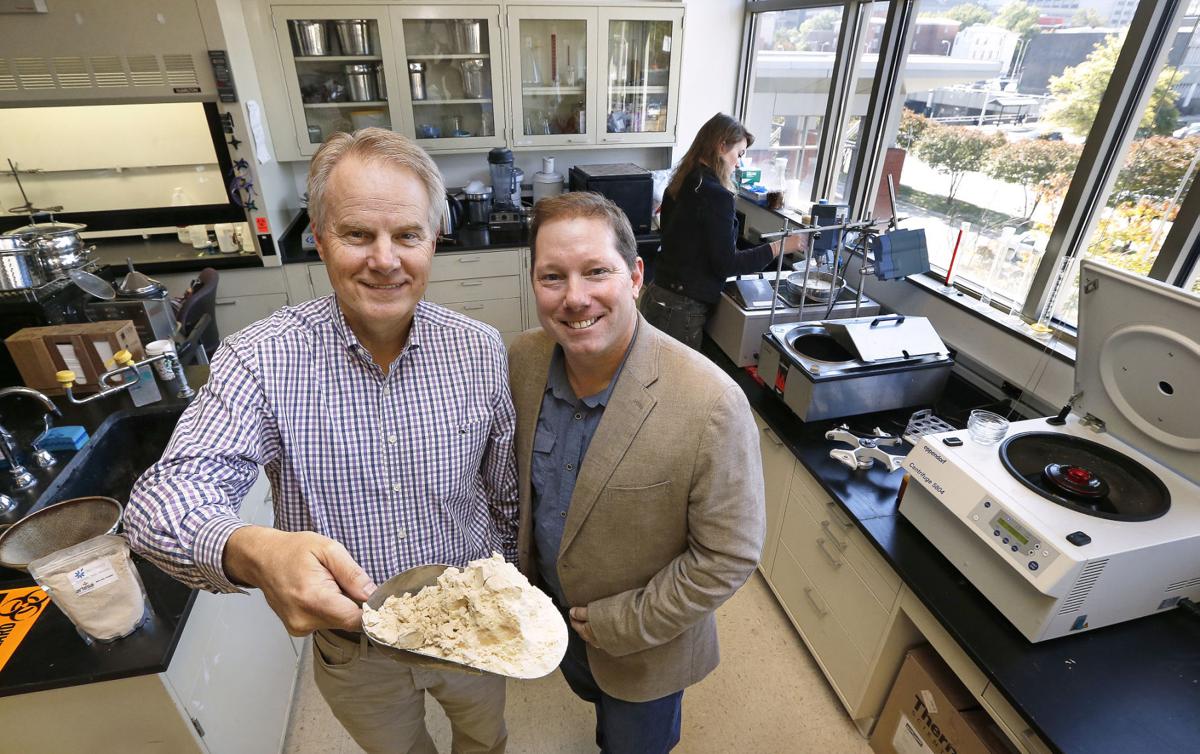 CEO Richard Kelly (left) and chief technology officer Michael Spinelli , co-founders of Nutriati Inc., show the chickpea powder developed by their company. They plan to begin production by the end of this year.

The Virginia Biotechnology Research Park is home to nearly 60 different companies and organizations that are working on the cutting edge of life sciences and technology.

Three companies based in the park — Nutriati, ImmunArray and Cupron — recently have announced progress in commercializing their various products and services.

“They have all responded really well to their challenges,” said Carrie Roth, president and chief executive officer of the biotech park in downtown Richmond. “They have worked with partners and used local resources to help them become successful.”

The chickpea has been a food staple in many parts of the world for thousands of years.

Richmonders have become more familiar with the chickpea the last few years since Sabra Dipping Co., an Israel-based food maker, opened a factory in Chesterfield County that makes hummus, a food spread containing chickpeas that has been growing in popularity in the U.S.

Now, another Richmond-based company, Nutriati, is seeking to make the nutrient-dense legume a much more common part of the American diet.

The biotech park has served as an incubator for Nutriati for about two years as the company has worked to develop its proprietary process for turning chickpeas into a powder that can serve as an ingredient in numerous food products as a non-allergenic, plant-based protein source.

“We have kind of stayed quiet for a long time because we are doing something disruptive in the marketplace,” said Richard Kelly, the company’s co-founder and chief executive officer.

“We have reached a point now where we are in production and we have got customers ready to buy from us,” he said.

If Nutriati’s plans develop, then chickpea protein power will become a common additive in food products that use other types of alternative protein additives now such as soy. Think of protein snacks, health food shakes and brownie mixes.

“Plant protein is just exploding in growth,” Kelly said. As discretionary incomes grow worldwide, “one of the things that more people need and want is protein. Plant protein is emerging as a preferred protein.”

In the U.S. “consumer product companies are working to find improved ingredients,” he said.

The company, which uses contract manufacturing to produce its chickpea powder, is about to deliver it first significant shipment to a customer in commercial food processing. The company is first targeting organic and natural food makers.

“We have got about seven consumer products companies that have already sampled our products,” said Mike Spinelli, the co-founder and chief technology officer of Nutriati, who has worked for 20 years in the food industry. “They are anxious to get more of it and get it into test markets.”

Spinelli said chickpeas offer several advantages over other plant-based protein substitutes, including a better nutrient profile and a lower risk of allergies.

Chickpeas also have a more favorable environmental impact in agriculture, Spinelli said. Nutriati is sourcing chickpeas from Canada right now, but the company wants to eventually work with Virginia farmers to grow the crop.

Nutriati recently got a $1.5 million round of funding from New Richmond Ventures, the Richmond-based venture capital fund that invests in and provides business advice to promising startup companies.

Bob Mooney, a principal with New Richmond Ventures and board chairman of Nutriati, said the company is a good example of the “purpose-driven” business that NRV seeks in investments.

“Nutriati represents the new economy that I call the ‘thinking of things’ economy,” Mooney said. “That economy is all about what is unique in Richmond that causes people to think creatively.”

About 250,000 Americans are known to have Lupus, a chronic autoimmune disease that causes joint pain, fatigue, hair loss, fevers, kidney problems and other symptoms.

Perhaps more than 1 million Americans have some form of the disease but don’t know it. Because the symptoms of Lupus also occur in many other conditions, it is difficult to diagnose. There is no single medical test that can confirm it.

Now a new blood test has been introduced that can simplify the diagnostic process for Lupus and prevent misdiagnoses.

That test is being offered by ImmunArray, a molecular diagnostics company with co-headquarters in Rehovot, Israel, and in the Virginia Biotechnology Research Park in downtown Richmond.

“I have run 10 diagnostic companies in my career, and this is the most complex disease I have ever had to deal with,” said Donna Edmonds, ImmunArray’s chairman. “It sometimes takes 3 to 5 years for somebody to get a firm diagnosis.”

ImmunArray, which was founded in 2006, worked with top experts in the field to develop the blood test.

The test can rule out Lupus with a high degree of accuracy.

“The world-leading lupologists are working with us and helped us design this because they really believe in it,” said Edmonds, who also is one of the co-founders of the Virginia Life Sciences Investment Fund, a private investment group that has backed many biotech startup companies in the region.

The initial clinical study on ImmunArray’s test was performed on blood samples from more than 500 patients.

Named the “SLE-key” test, it uses a patented technology that ImmunArray calls its “iChip” technology to look for the presence of 200 biomarkers in a patient’s blood.

The test is designed to rule out Lupus because the disease has symptoms that are similar to other autoimmune conditions such as rheumatoid arthritis.

About 16,000 people are diagnosed with Lupus every year, but only about one in five people suspected of having the disease actually has it, said Michael F. Petruny, vice president of sales and marketing for ImmunArray.

“That is where our test can help, to rule those patients out,” he said. That helps physicians make the correct diagnosis and avoid putting patients on the wrong medication.

Edmonds said the first test will serve as a platform from which ImmunArray can develop others.

ImmunArray had been operating from an office in the biotech park’s incubator, but the company recently moved into a larger, 3,300-square-foot office and laboratory in the park, a space that was formerly occupied by the diagnostics company Health Diagnostic Laboratory Inc.

Even before its Lupus test, ImmunArray had been working on the cutting edge of diagnostics, in the field of brain injuries.

In early 2014, the company announced it had received a $300,000 grant from the National Football League to work on developing a blood test to detect and track biomarkers that indicate the severity of head injuries. The company also is working with a large corporate partner to develop the testing program.

“We have a series of markers that can measure whether you have brain injury,” Edmonds said. “We will be able to tell when you are capable of going back to work, or to play. We can detect mild, moderate or severe brain injury.”

Edmonds said 10 local investors formed a core group that has supported the company’s work and expansion so far.

“The local business community that has stepped up to support us has been remarkable,” she said.

Now, ImmunArray has retained an investment banking firm and is seeking an additional round of investments worth about $10 million.

The company employs 11 people in Richmond and 11 in Israel. Its staff includes two people with doctorate degrees recruited from Virginia Commonwealth University.

“With this next round of funding, we will be hiring actively,” Edmonds said.

The company will be looking for scientists, sales and marketing professionals, and employees to help develop its manufacturing capability.

The company, which has its U.S. office in the Virginia Biotechnology Research Park, developed a process to infuse textiles and other materials with particles of copper oxide, making the materials resistant to runaway microbial growth.

The technology can help prevent everything from odor to athlete’s foot to potentially deadly infections.

Executives with the company said several major brands are preparing to introduce products that use its copper-infusion technology.

Among them is Dr. Scholl’s, which is expected to introduce a line of socks early next year using Cupron’s technology.

Under Armour, a maker of sports and outdoor apparel, is using it in a line of outdoor boots, and the company is expected to introduce a line of underwear with the technology next year.

A year ago, “we were essentially proving that this can be done, and we were trying to get the attention of big brands,” said Jason Ellis, Cupron’s general manager for medical products.

“That has all paid off, and now these large, multinational brands are incorporating the technology into their products.”

Cupron was founded in Israel and opened a U.S. office in Richmond in 2009. The company licenses its technology to consumer products makers to integrate into different applications.

“We are progressing along the lines that we hoped we would,” said Chris Andrews, president of Cupron’s Americas business.

The company has received most of its publicity for making anti-microbial socks, but its biggest potential market is still a work in progress.

Cupron wants to equip hospitals with a variety of copper-infused anti-microbial materials including linens, gowns and countertops, to help prevent hospital-acquired infections.

Early in 2014, the company announced a clinical trial in which Sentara Norfolk General Hospital and Sentara Leigh Hospital would use the company’s copper-infused countertops, hospital gowns and bedding to test its efficacy.

The results of that research have not been published yet, but could be within a few months.

“We can say that the results are encouraging, and the deployment is being greatly expanded,” Ellis said.

The Environmental Protection Agency recently approved Cupron’s request to advertise its products as providing anti-odor properties. The agency already had granted the company’s request to market its products as being able to kill the fungus that causes athlete’s foot and jock itch.

“It has been an exciting year, and we are fired up for what is coming next,” Ellis said.

Lab technician Joseph Green worked on testing for traumatic brain injury at ImmunArray in Richmond in October. ImmunArray has offices in the Virginia Biotechnology Park in Richmond and in Rehovot, Israel.

Sentara Healthcare has chosen the its Sentara Leigh Hospital in Norfolk to test the effectiveness of anti-microbial surfaces and materials developed by the Richmond-based company Cupron Inc. The interior shots are of countertops and a bathroom sink at the hospital, made with Cupron's copper-infused, anti-microbial materials

CEO Richard Kelly (left) and chief technology officer Michael Spinelli , co-founders of Nutriati Inc., show the chickpea powder developed by their company. They plan to begin production by the end of this year. 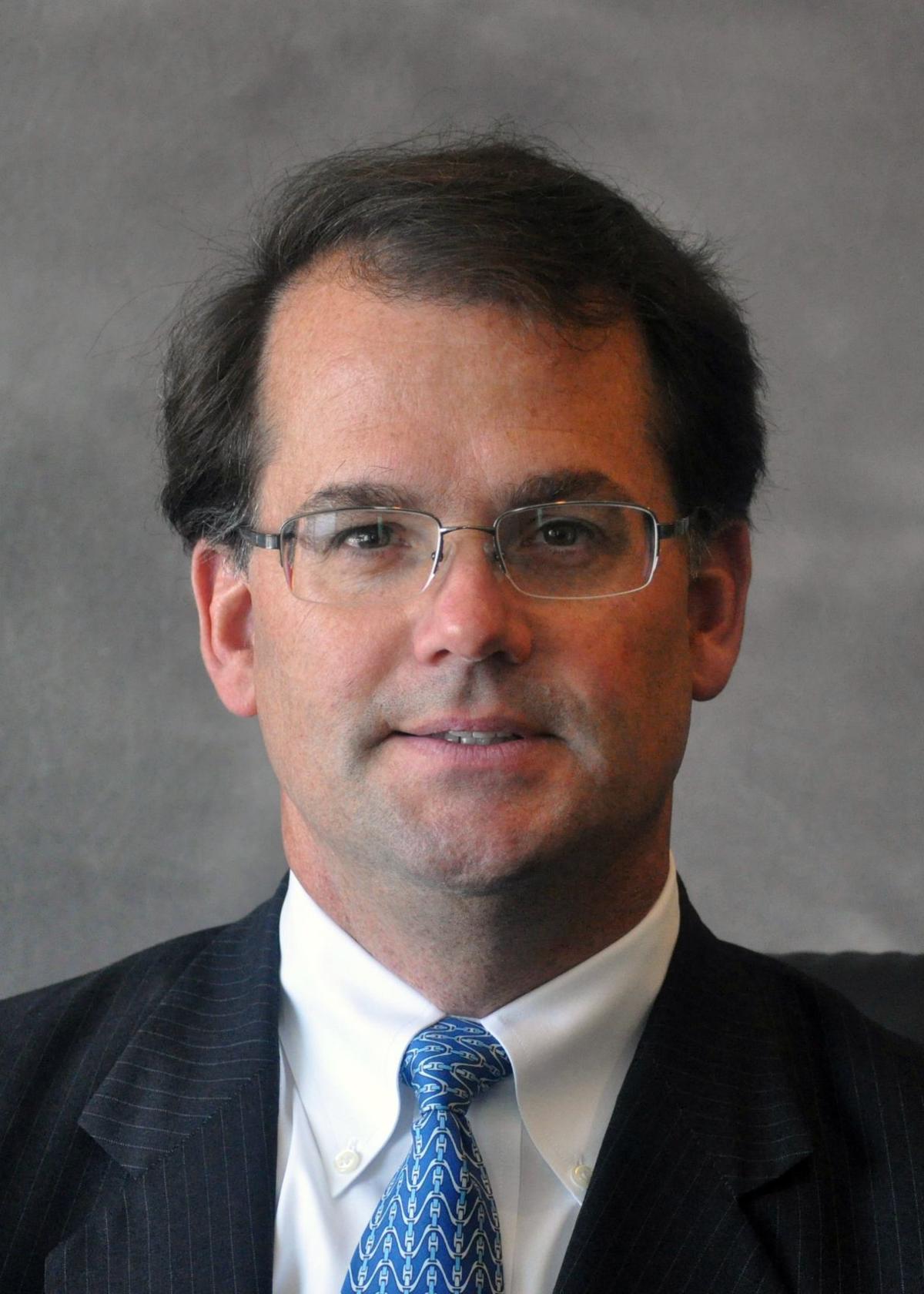