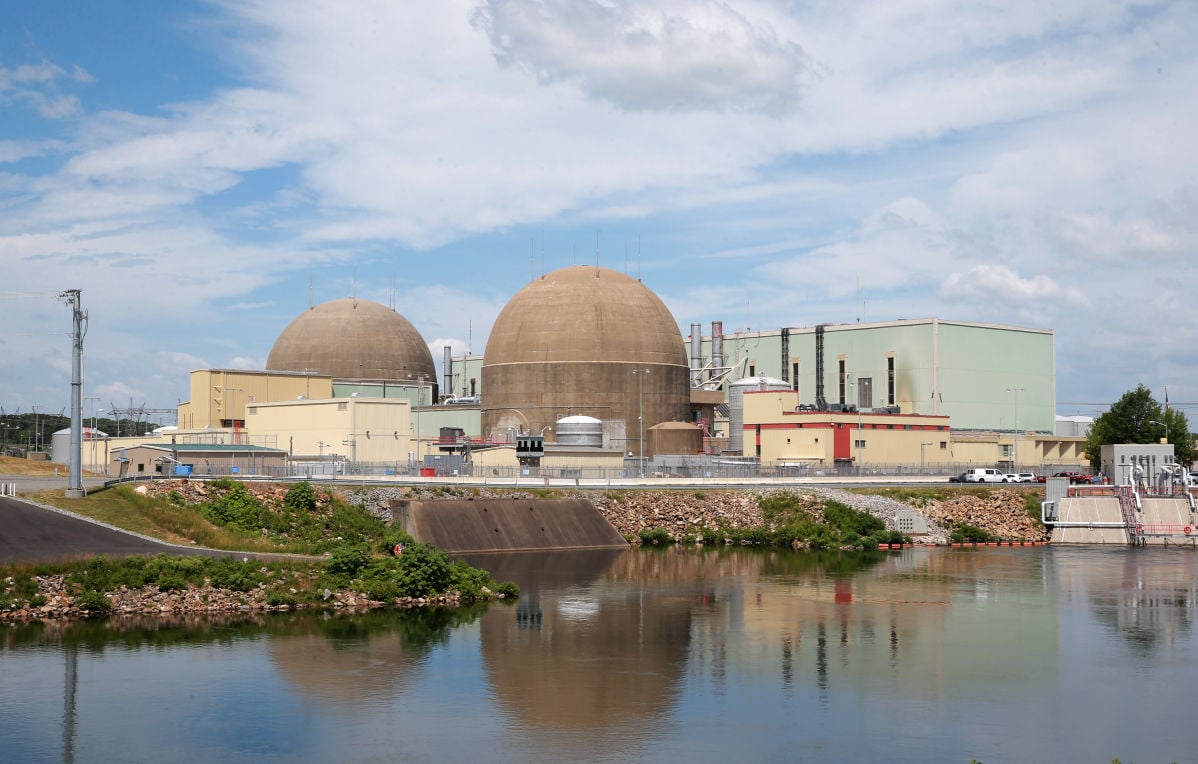 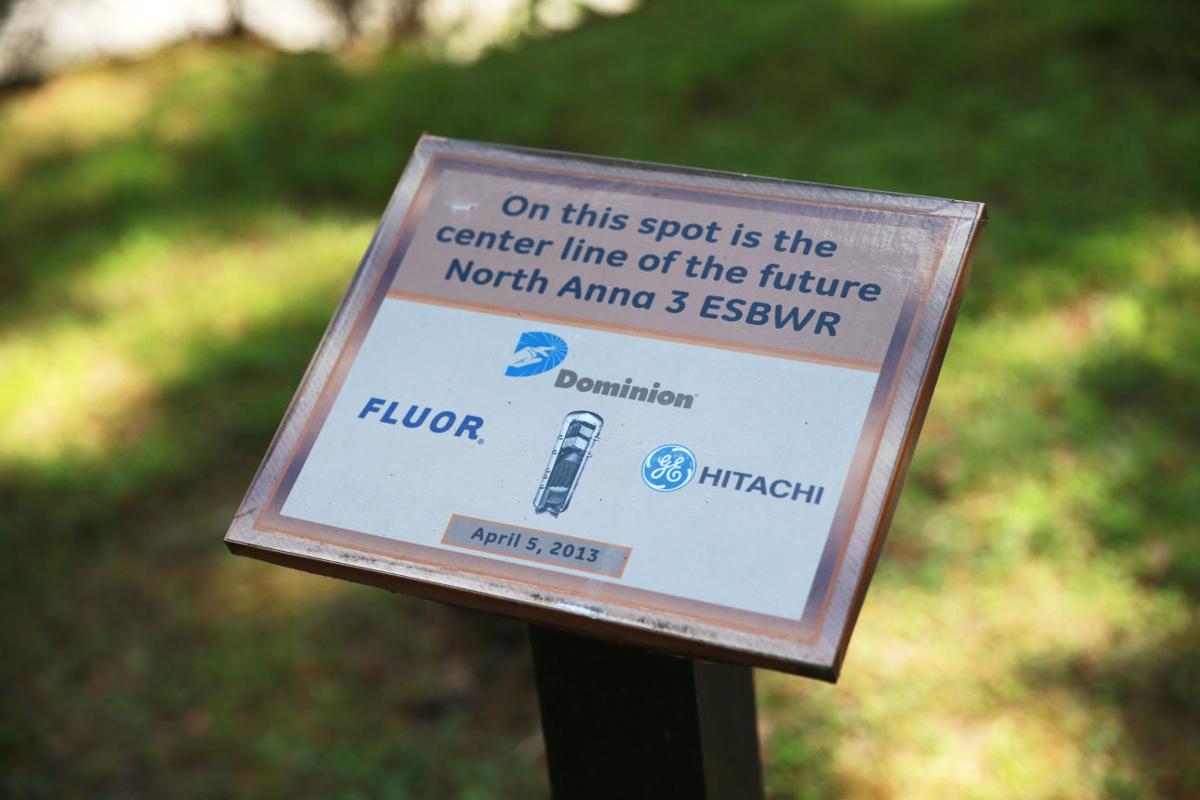 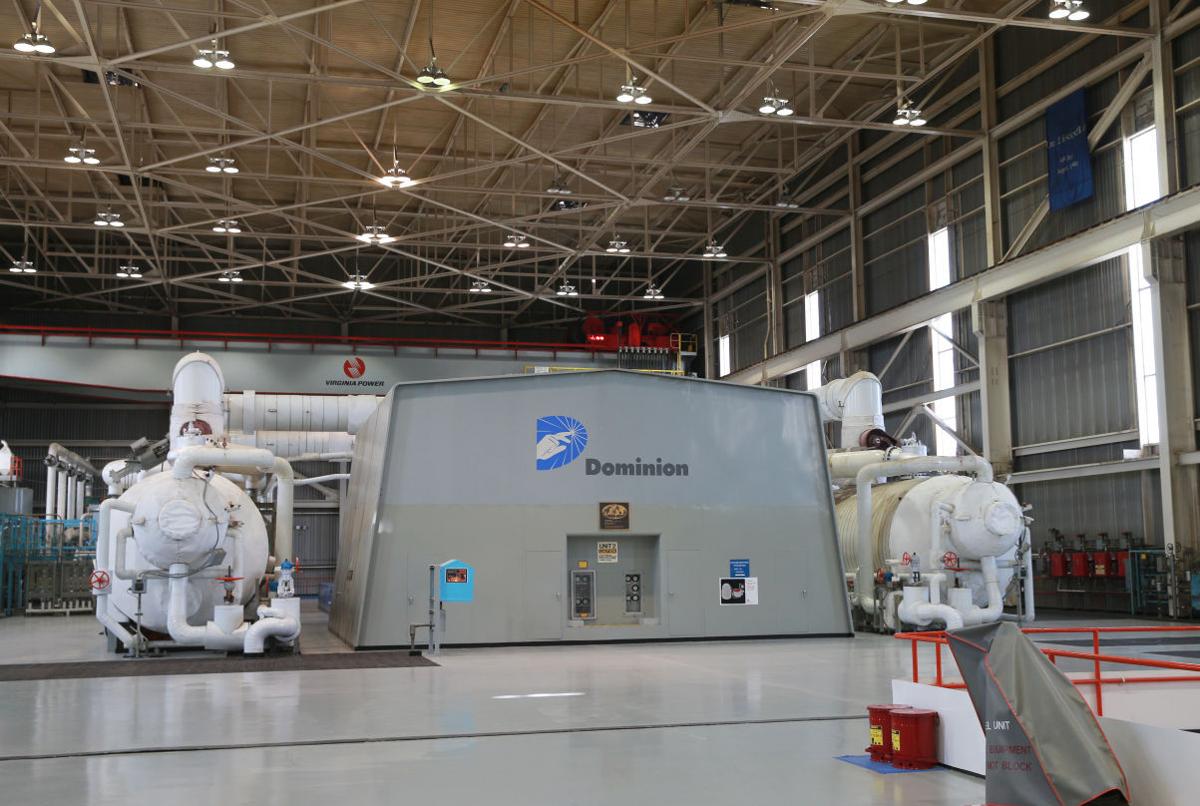 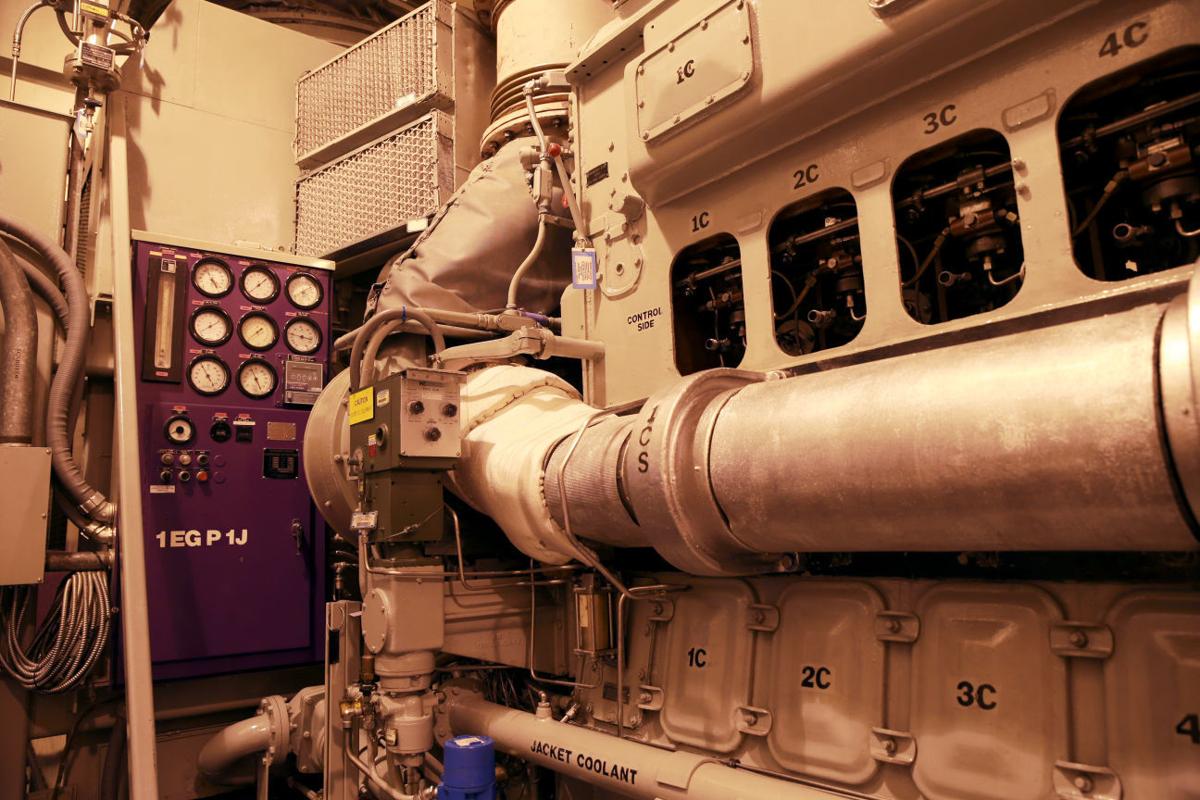 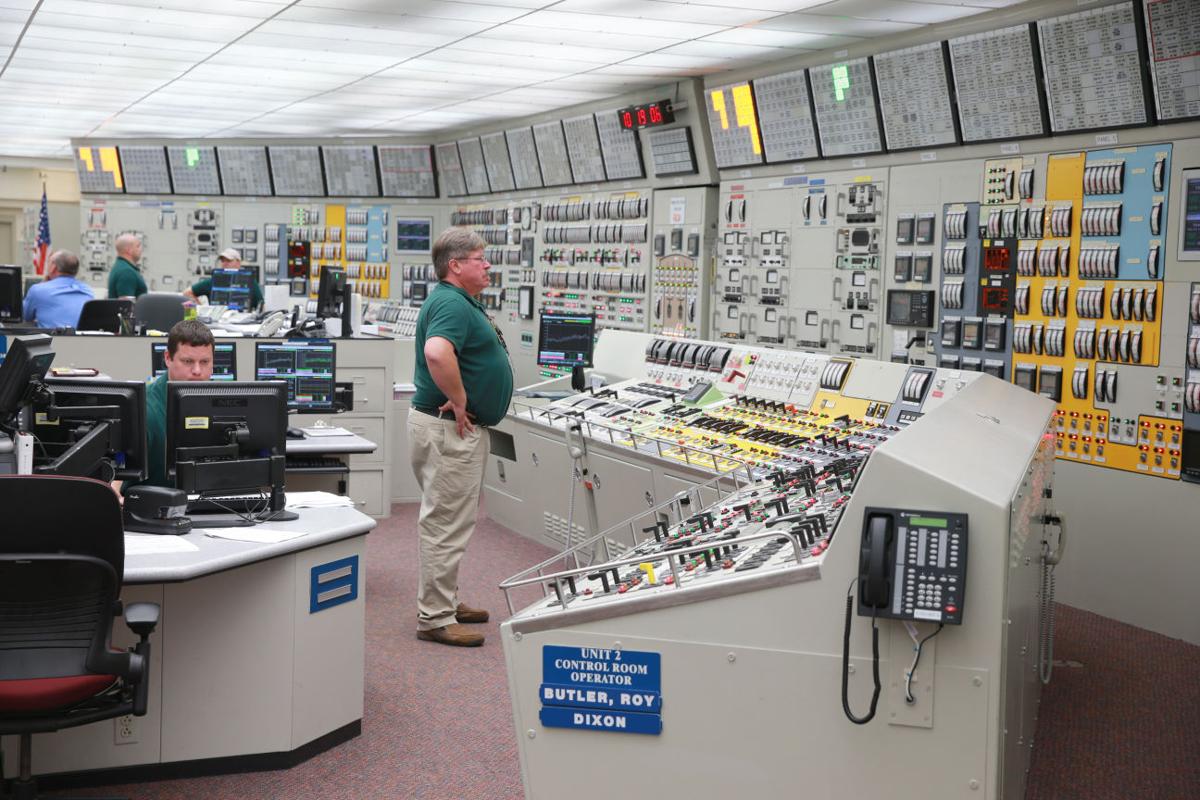 Roy Butler, Jr., center, and others operate the control of reactor at the control room of North Anna nuclear power station on June 15, 2015. 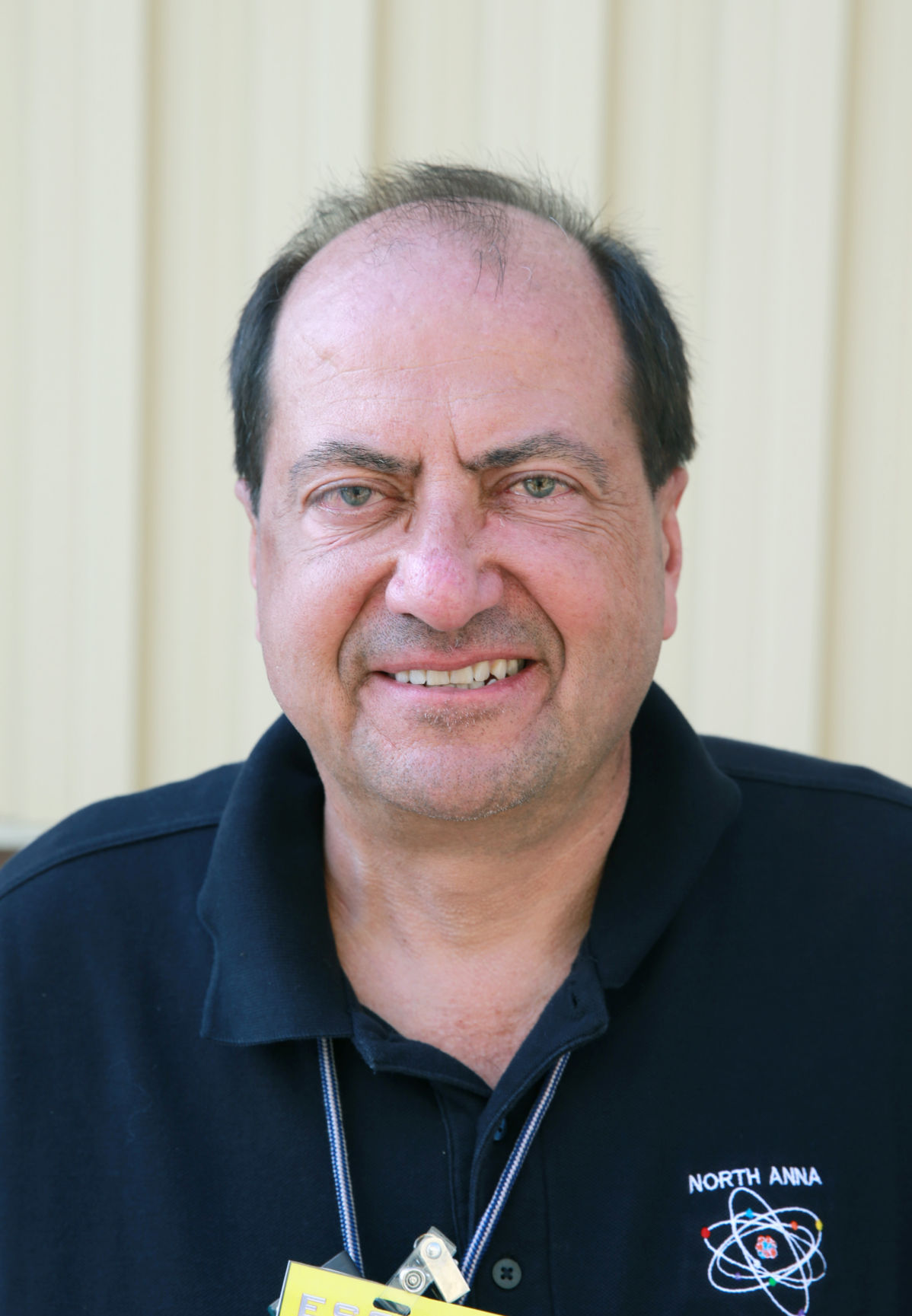 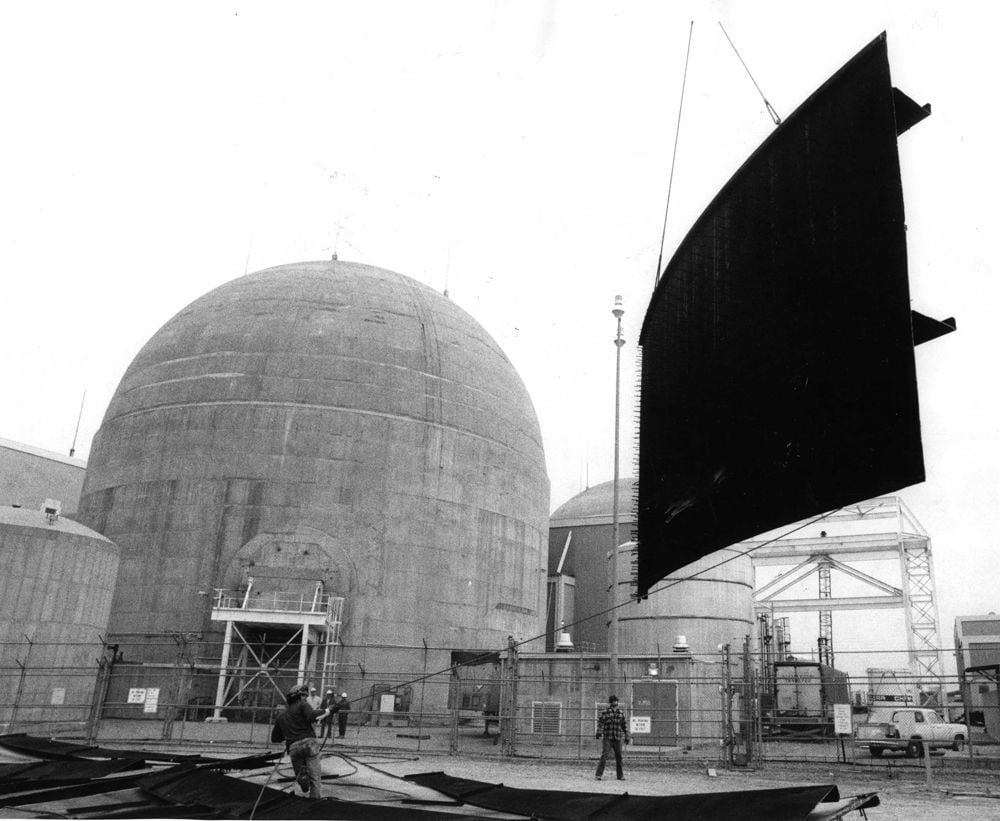 With Unites 1 and 2 rising in the rear, workmen dismantle North Anna Unit 3. Work was taking place on Nov. 18, 1982, despite the fact that Vepco's board, which would make the final decision, was to meet Nov. 19. 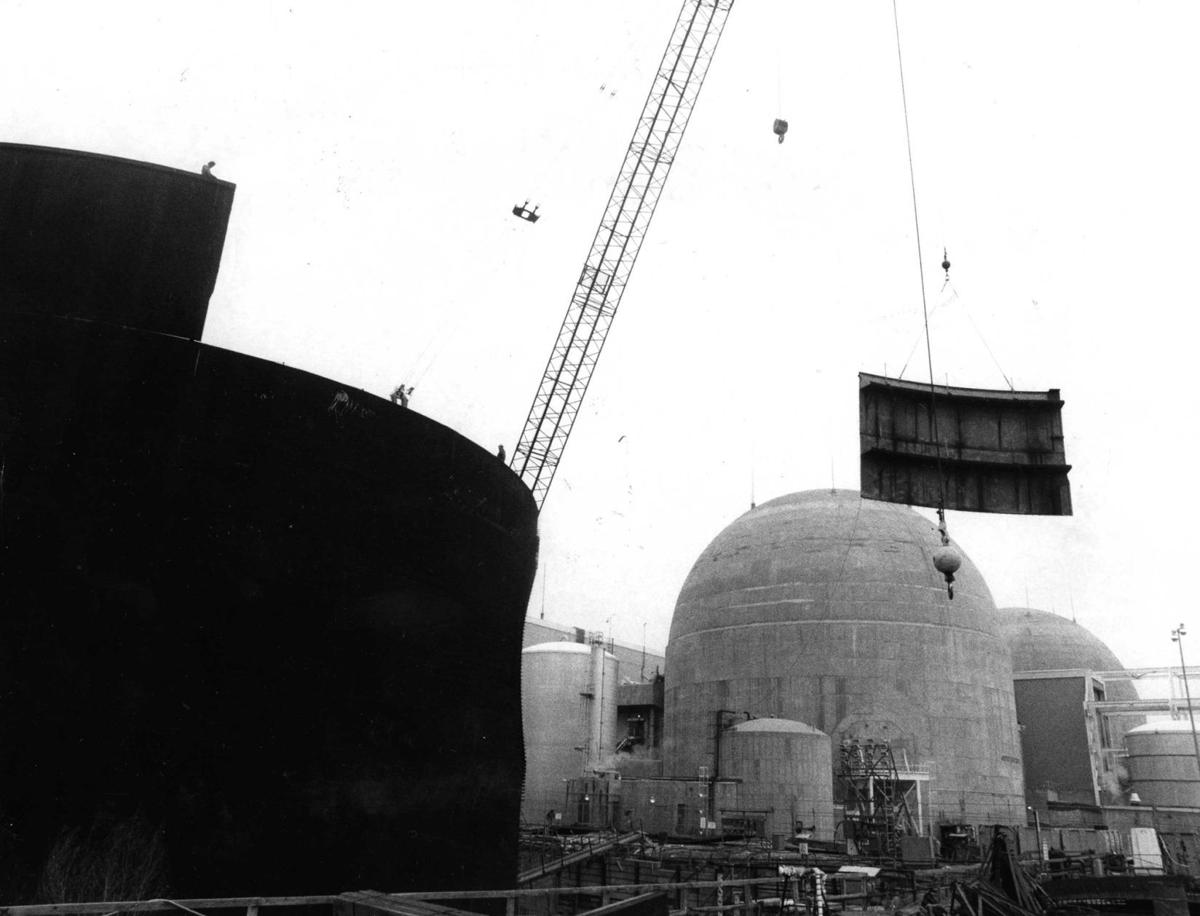 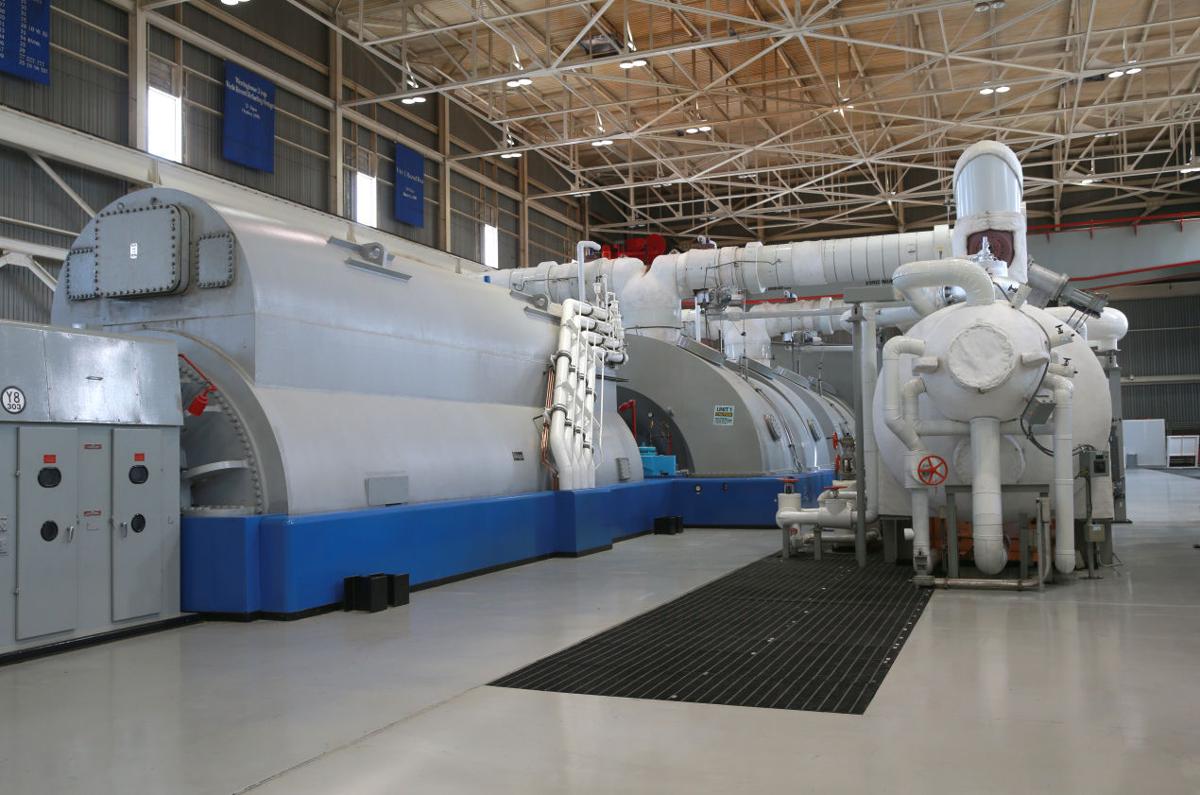 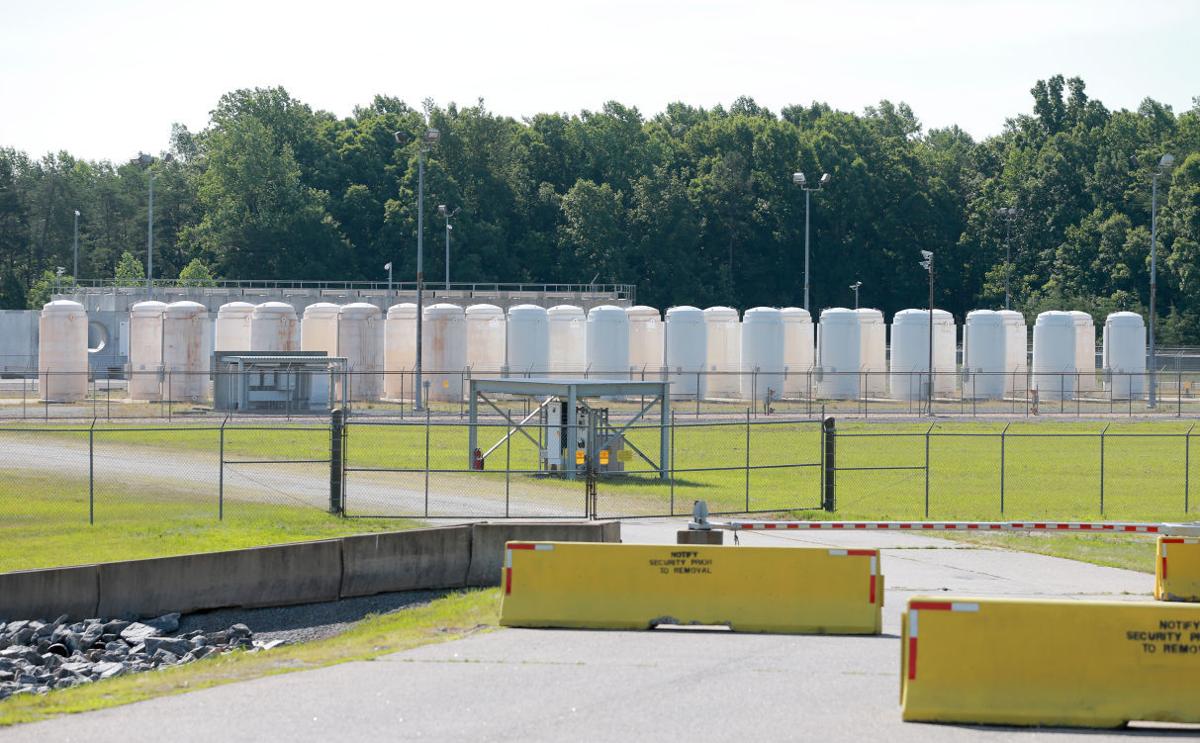 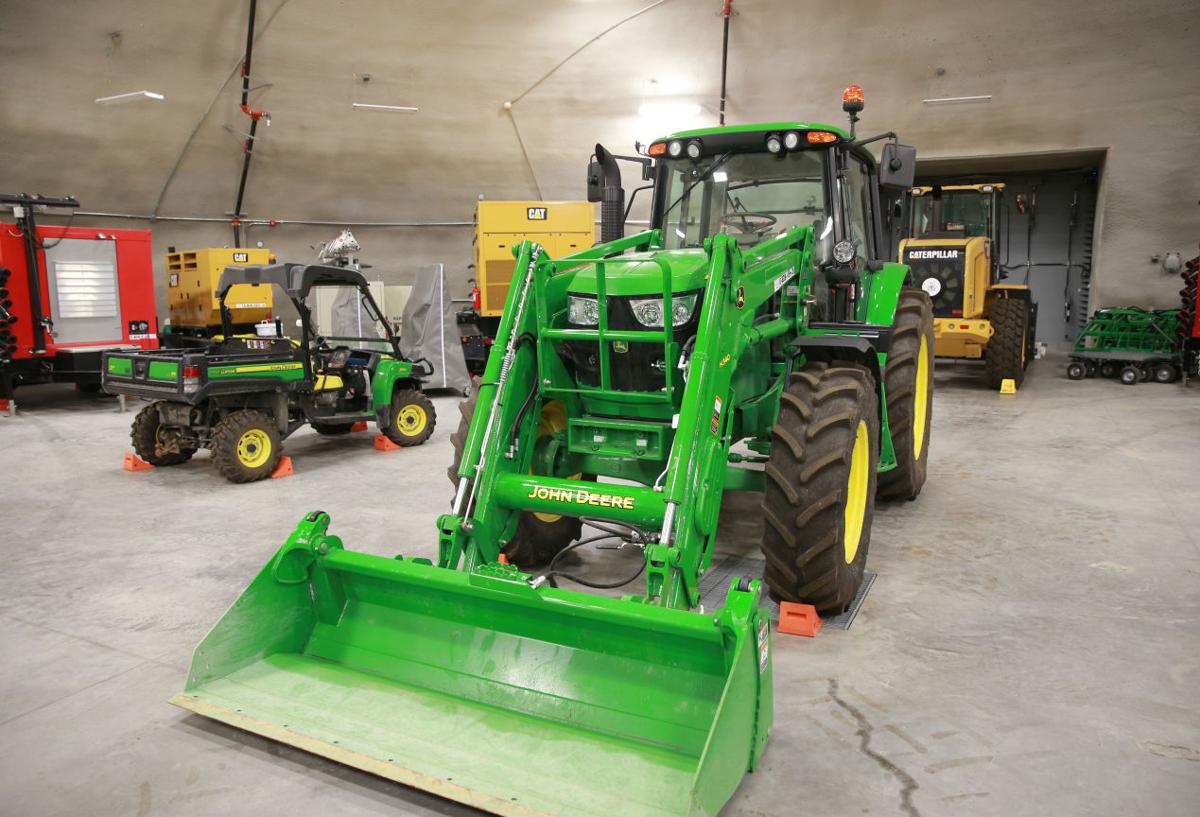 These pieces of equipment are ready to use at Beyond Design Basis building for emergency at North Anna nuclear power station on June 15, 2015. 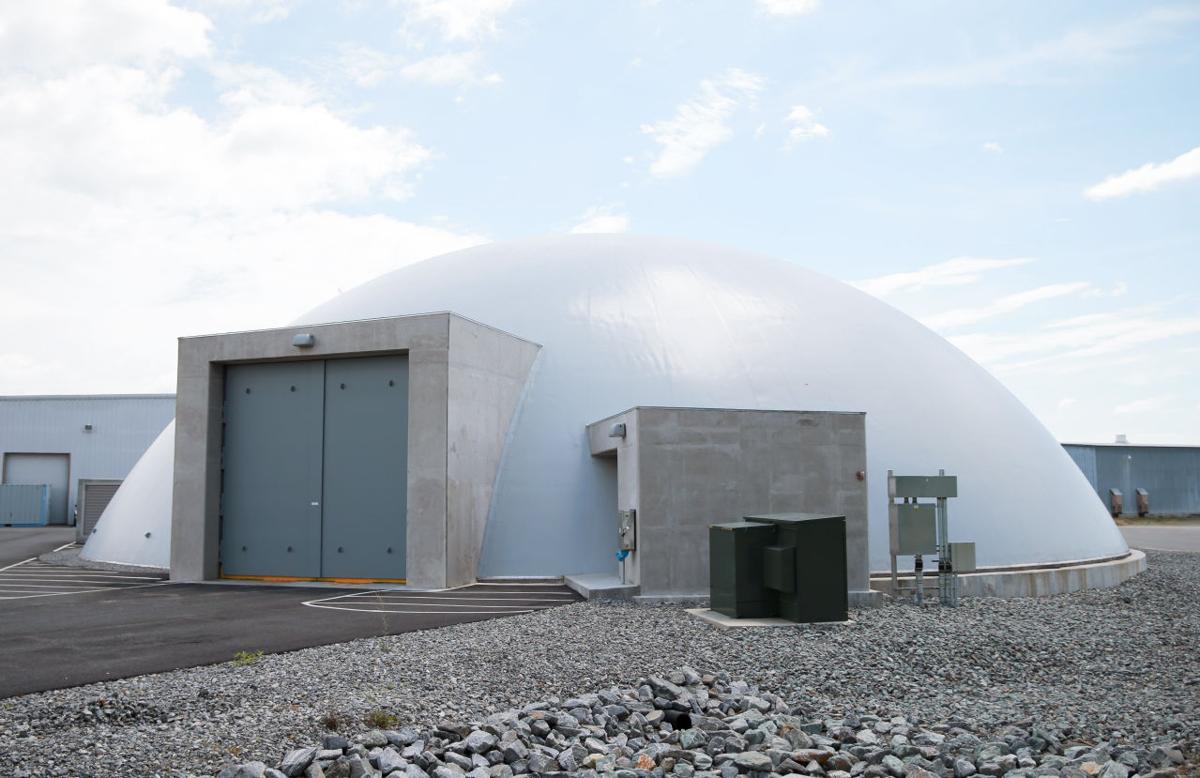 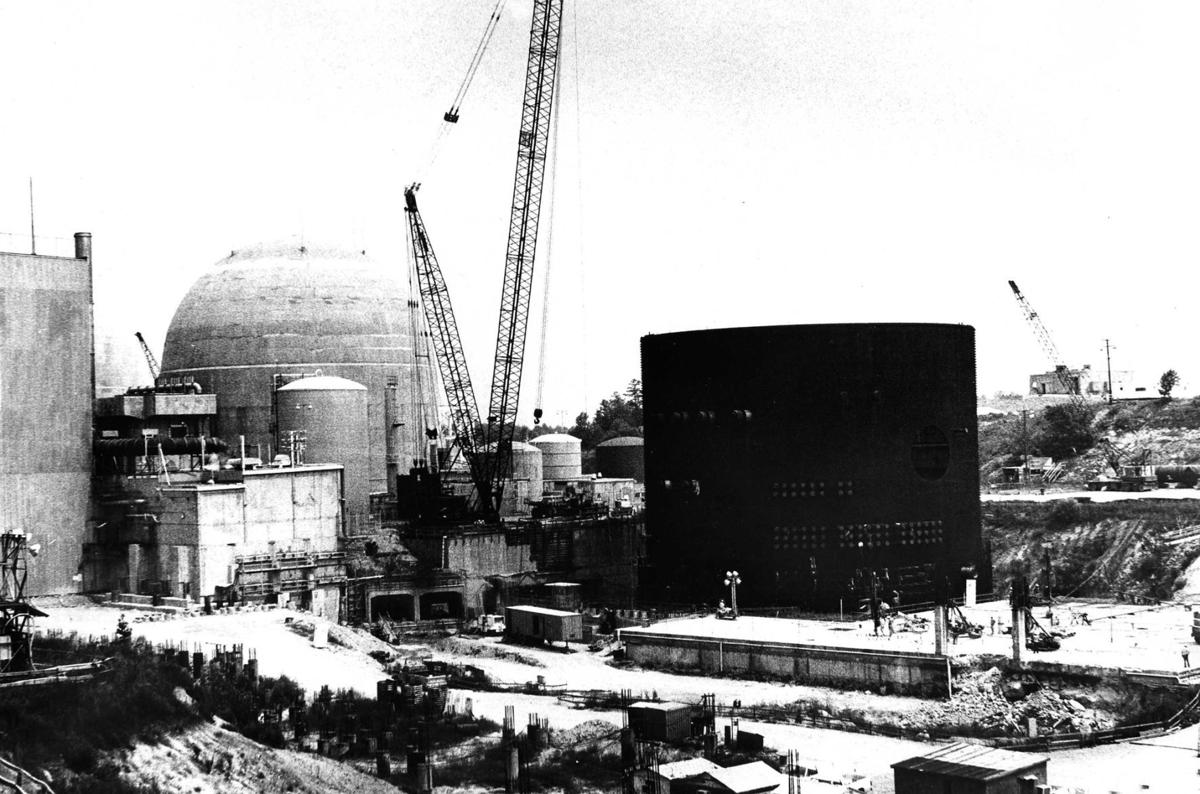 MINERAL — A new set of federal standards is poised to change the way electricity is made across the country, moving the nation further away from coal and toward cleaner energy sources.

But in Virginia, the rules known as the Clean Power Plan already are becoming part of a larger debate over whether the state’s largest utility should build another nuclear reactor.

Environmental groups envision a path that relies more on clean energy such as wind and solar as well as programs intended to make buildings more efficient so they use less power.

Executives at Dominion Virginia Power see the requirements to reduce carbon emissions as a potential boost to the idea of more emissions-free nuclear generation. The company in 2001 began working on a plan for a third nuclear reactor at its North Anna Power Station in Louisa County.

In a 15-year forecast filed with the State Corporation Commission last week, a plan for North Anna 3 was among four options the company outlined as a possibility to meet demand while also complying with the new carbon rules. Dominion Virginia Power for the first time didn’t indicate which of the plans it prefers.

The Environmental Protection Agency has released a draft of the Clean Power Plan that Dominion Virginia Power and state officials have said is too stringent on Virginia. Under the proposed rules, which will be released in final form this summer, Virginia must cut its carbon output 38 percent by 2030. Neighboring West Virginia, which is more reliant on coal, has to cut 20 percent.

The State Corporation Commission, in a report last year, said the plan would cause power bills to “increase substantially” in Virginia and cost Dominion Virginia Power up to $6 billion. The report included in its analysis the construction of a third reactor at North Anna.

“If the rule comes out as is, that might in itself make the business case for North Anna 3,” said Jerry Bischof, site vice president at the North Anna plant.

North Anna’s round room safety feature is first of its kind in U.S.

A small concrete dome near the North Anna Power Station holds all the tools that employees at the nuclear plant hope they never have to use.

Others who’ve analyzed how Virginia could reduce its carbon emissions say nuclear energy doesn’t need to be part of the discussion.

A report by the Southern Environmental Law Center claims that Virginia already is 80 percent of the way to meeting its clean energy requirements if the state’s utilities continue with their plans to retire coal plants and replace them with natural gas.

The remaining 20 percent can be reached with a mix of solar and wind farms along with a focus on energy efficiency, said Cale Jaffe, Virginia office director with the SELC.

The result would be slightly higher electricity rates but lower bills due to the increased efficiency, Jaffe said. But the reports don’t take into account the costs associated with Dominion Virginia Power’s plans, said Ann Loomis, senior federal and environmental adviser at Dominion Resources, the parent company of Dominion Virginia Power.

“Maybe on paper (it works), but in reality a lot of components they refer to are elements that are yet to be built, yet to be paid for. So there are costs associated with complying with the plan,” Loomis said.

David A. Heacock, chief nuclear officer at Dominion Nuclear, a subsidiary of Dominion Resources, said a new reactor at North Anna also would help meet growing demand for power in the state. Wind and solar power also don’t emit carbon, but unlike nuclear power they aren’t as reliable. Even with Dominion Virginia Power’s investments in solar and wind power, meeting the EPA’s requirements may not be as simple as some analysis makes it seem, he said.

Another concern for Dominion Virginia Power is whether it can renew its existing reactors for another 20 years. The licenses in Surry expire in 2032 and 2033, and in North Anna in 2038 and 2040. Without those renewals, executives said, it’s unclear how the state will continue to meet its clean power requirements.

Dominion Virginia Power’s leaders have long wanted to build a third nuclear reactor at their North Anna plant. A containment building to house the reactor was nearly finished in 1982 before being torn down in the wake of costly new regulations after the partial meltdown in 1979 at the Three Mile Island nuclear plant in Pennsylvania.

The sudden reversal by the utility, then known as Vepco, reversed construction that already had cost the company more than $500 million. It blamed the new regulations for adding about $1 billion to the final price tag. Plans for a fourth reactor were scrapped two years earlier and have never resurfaced.

But the idea of a third reactor lingered, and Dominion Virginia Power began work in 2001 to potentially build it on a different area of its North Anna property. Outside the old visitors’ center, where people gathered to watch the first two reactors go up on the shore of Lake Anna, a small plaque marks the center of what could become the site of the third reactor.

“This is all just waiting for the bulldozers to come in,” Bischof, the site vice president, said while standing near that plaque.

The new reactor would produce 1,500 megawatts, about 1.5 times more than the original reactors. And it would include a cooling tower because, unlike the first two, the third reactor wouldn’t use the lake to cool its heated water. Heacock said that, in numerous public meetings about a third reactor, support for the project has outweighed opposition.

Some environmental groups raise the specter of safety alongside the high price tag of nuclear. The two reactors at North Anna were tripped by a magnitude-5.8 earthquake on Aug. 23, 2011, and stayed off for three months, but extensive inspections found no functional damage.

“We fundamentally disagree that North Anna 3 is a reasonable means of complying with the Clean Power Plan,” said Glen Besa, director of the Virginia chapter of the Sierra Club. “There are much safer and much more economical ways.”

Walton Shepherd, an attorney with the Natural Resources Defense Council, said he expects the debate to get messy. After the EPA issues its final rule this summer, each state will have to submit its plan to show how it plans to mix various energy sources to meet its carbon-reduction goals.

Shepherd said the numbers he’s working through show that Virginia could reach its goal if Dominion Virginia Power’s follows through with its already planned coal-plant retirements and keeps all gas plants running at the same level as 2012, and if the state meets its optional targets of 10 percent electricity savings and 15 percent more renewable energy.

“The main story in Virginia so far has been this disconnect between what is actually the rule versus what is posed as this insurmountable challenge,” Shepherd said.

“Dominion is in position to say ‘We have all these plants, how are we going to reduce emissions enough?’ Then they’d say ‘Let’s build this shiny new nuclear plant.’ The environmentalists will come in and say ‘Wait, you don’t need to do that.’ That’s phase two of the food fight around the energy mix.”

Roy Butler, Jr., center, and others operate the control of reactor at the control room of North Anna nuclear power station on June 15, 2015.

With Unites 1 and 2 rising in the rear, workmen dismantle North Anna Unit 3. Work was taking place on Nov. 18, 1982, despite the fact that Vepco's board, which would make the final decision, was to meet Nov. 19.

These pieces of equipment are ready to use at Beyond Design Basis building for emergency at North Anna nuclear power station on June 15, 2015.