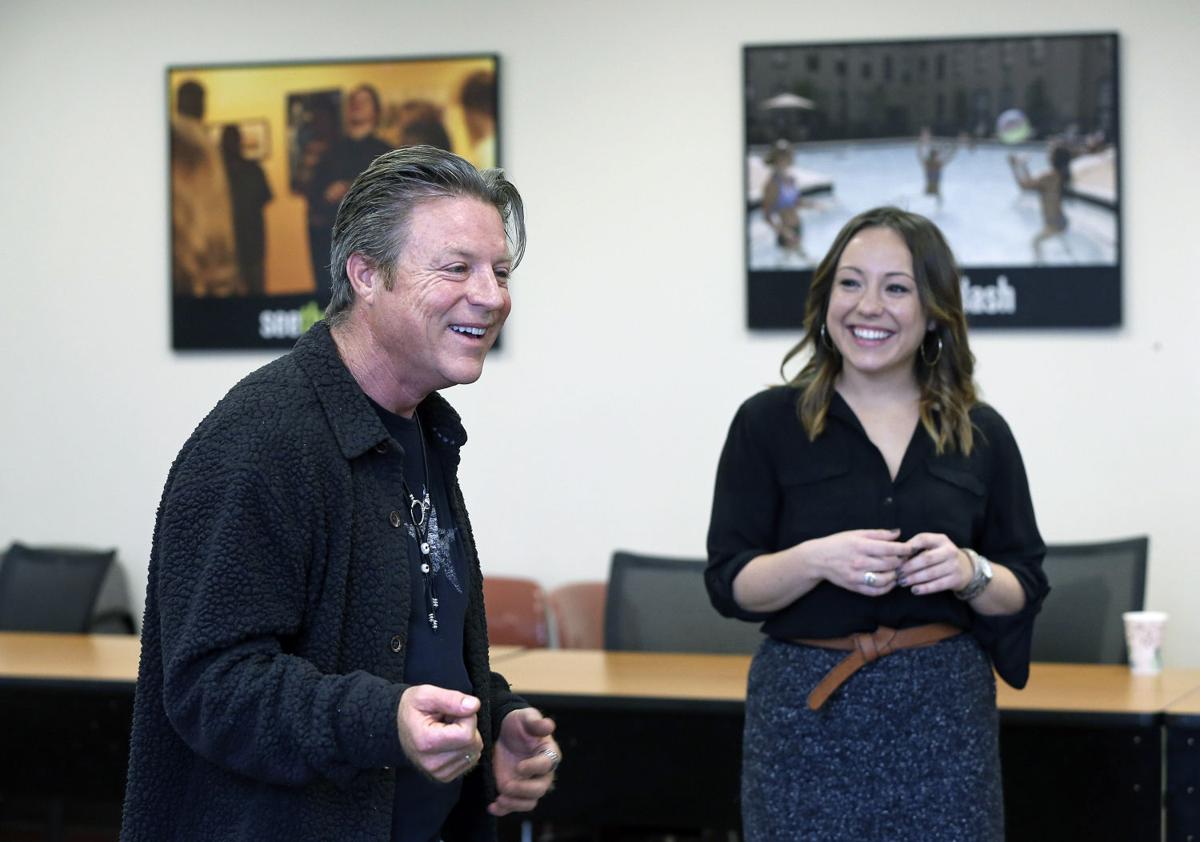 Pat Hull, left, speaks to members of the UnBoundRVA Entrepreneurs class after he presented a $20,000 donation to UnBoundRVA's Sarah Mullens, right, from the Hull Foundation, Feb. 3, 2016. Mullens is co-founder and executive director of UnBoundRVA. 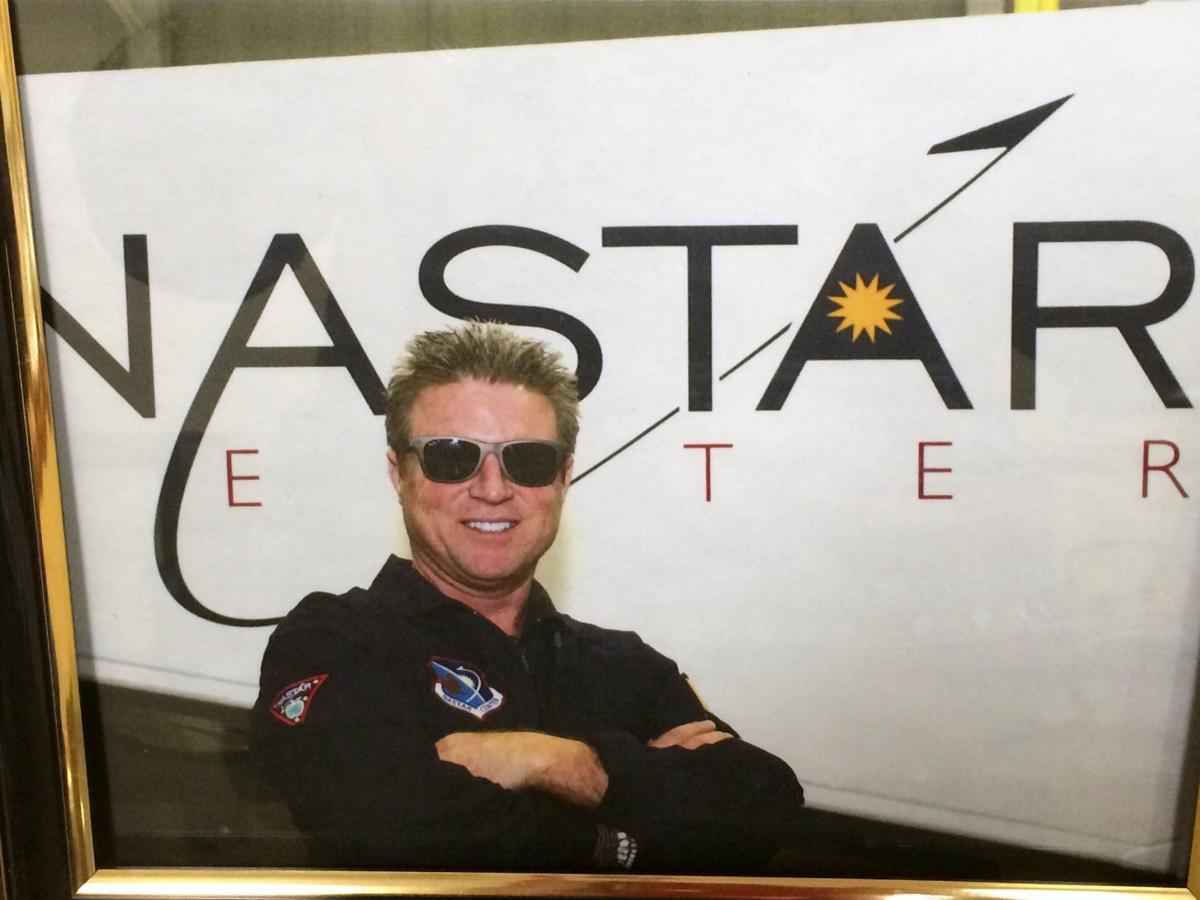 Pat Hull (left), president of Getloaded.com, and Ken Hammond, vice president of marketing with the same company, at the Petro Truck Stop in Caroline County. The company helps truckers find loads via computer to avoid travel with empty trailers. 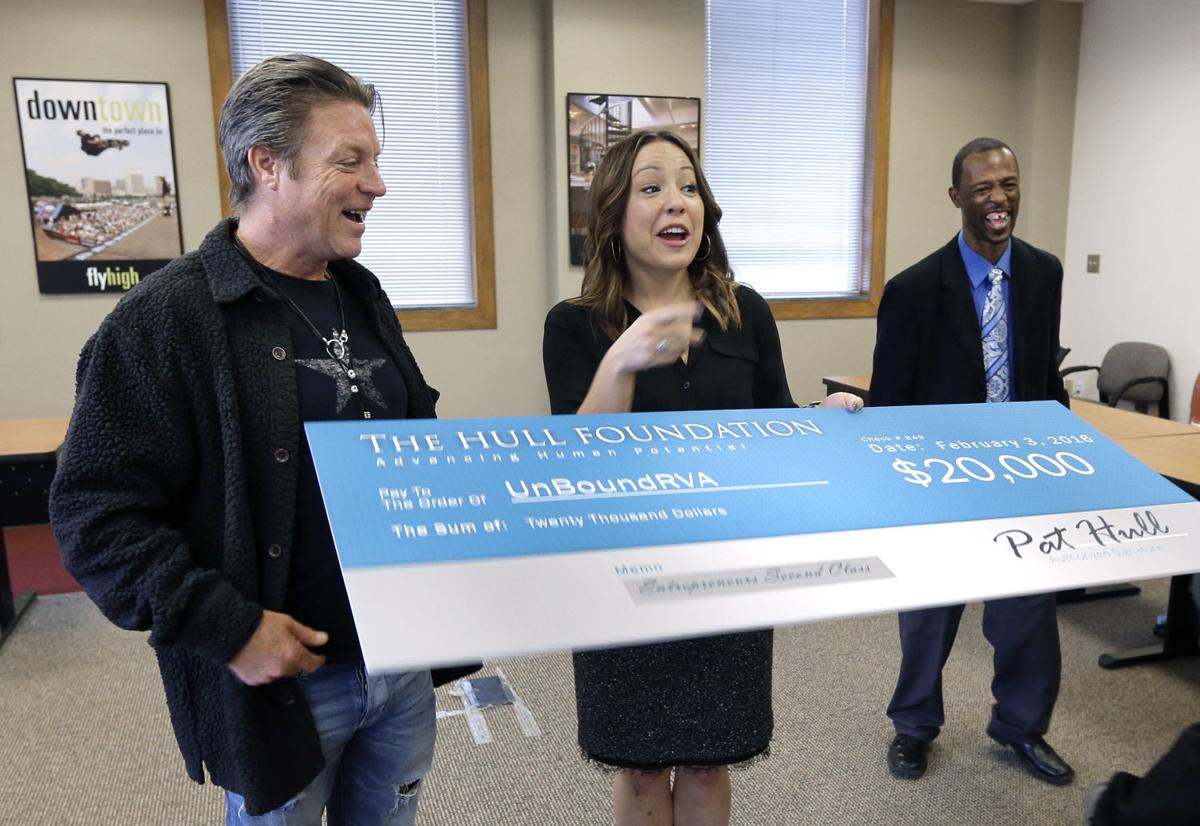 Pat Hull, left, Sarah Mullens, and Royal McCargo react after Hull presented a check from the Hull Foundation to UnBoundRVA Entrepreneurs, Feb. 3, 2016. Mullens is co-founder and executive director of UnBoundRVA. McCargo is in the UnBoundRVA program as an entrepreneur.

“I’m interested in many different projects,” said Hull, a downtown Richmond resident who is more likely to be seen wearing frayed blue jeans and a T-shirt than a coat and tie when he meets with business contacts, not at an office but usually at a coffee shop or locavore eatery such as the Urban Farmhouse Market & Cafe in Shockoe Slip.

ScoopMonkey is one of many ventures that he has co-founded or backed.

Hull, 49, is best known for Getloaded.com, an online freight-matching service for long-haul truckers that he co-founded in Richmond in 1999. He led the company until it was sold to Roper Technologies in 2008.

Since then, he has been involved in creating and developing other startups such as FreightGuard, a provider of cargo/gap insurance for the trucking industry.

His company, PHull Holdings, also has investments in entertainment, property management and a construction company.

In conversation, though, Hull is more likely to talk about what opportunities are on the cutting edge of commerce and technology — ideas that at first seem like they could even be a little over the edge.

One of Hull’s favorite topics is augmented reality. He’d like to see Richmond become home to the world’s tallest skyscraper.

The skyscraper he envisions would not be the sort that houses apartments or offices, but the kind that is virtual — a computer-generated alteration of the landscape that can be seen by anyone using virtual-reality tools.

Augmented reality, Hull said, “is something no one has really claimed yet,” but he thinks that it will suffuse the landscape in the future as cities and businesses adopt the technology for communications and marketing.

Hull said he would like for Richmond “to become the epicenter of virtual augmented reality.”

“It’s in its infancy,” he said of the technology. “What I would like to do is adapt it for businesses and cities so they can use it for promotions.”

Besides that, Hull has a number of other tech-related ventures in various stages of development, including a social media app that could replace many text-based communications with voice messages. It is designed so that people can record short audio clips of themselves on their smartphones, which they then can share with other people.

The upcoming app also is designed so that an audio clip can be linked to a specific geographic coordinate, so that people who come along to the same spot can use their own devices to listen to comments previously recorded there by others, he said. “I can see it being used a lot in tourism,” he said.

“We really express ourselves best through our voices,” said Hull, adding that he wants the app to offer something that text-based social media is missing — the sense of nuance and emotion that can come from only the human voice.

Like many of his other ideas, the idea for the voice app originally started as a tool for the trucking industry.

Such was the case with ScoopMonkey, which is an online review and rating service for the freight transportation industry.

With that business, “I decided to get back into transportation work, because I know it so well,” Hull said.

A native of Louisville, Ky., Hull was adopted at birth by John and Marianne Hull. His early ambition was to be a real estate developer, and he studied construction management at Virginia Tech in the mid-1980s, eventually earning a graduate degree in the field.

He started his first company, Cayman Inc., a provider of critical path method scheduling for contractors, when he was a graduate student.

“Pat is kind of a heads-down, 24-7 entrepreneurial guy,” said David Gee, the founder of Chester-based transportation brokerage VHI Transport Inc., who said he has known Hull for about nine years.

“He is a classic, driven, A-type personality who enjoys variety, and he has a lot of smarts about business.”

In 2011, Hull co-founded Richmond Unite, a campaign to raise money for local charities and encourage entrepreneurship in the area.

The headliner of its first fundraising event that year was a visit by Sir Richard Branson, the English businessman and philanthropist who founded the conglomerate Virgin Group Ltd.

Hull considers Branson a good friend and a mentor. He has since been through training to become a passenger on Branson’s Virgin Galactic commercial space flight program.

Like Branson, Hull said he spends a lot of his time now mentoring startup businesses and supporting charities and entrepreneur programs through The Hull Foundation, the charitable arm of PHull Holdings.

“I’m just a guy in Richmond who has had success in Richmond, and I am trying to do my part to make the city thrive,” Hull said.

The foundation, for instance, has made two $20,000 donations to UnBoundRVA, a nonprofit that provides training and mentorship to people from low-income communities who want to start their own businesses.

At a Feb. 3 event announcing the most recent donation, Hull showed up in boots, ripped blue jeans, a black T-shirt and a coat, and proceeded to tell the most recent UnboundRVA class members a story about how he was once attacked and bitten by ants as a child.

“After that, I was really intrigued with ants,” he said.

An uncle — a businessman whom Hull admired — noticed the boy’s obsession and advised him to study ants and be the most knowledgeable person in the world about ants.

“He said, ‘Whatever you do, do something you love to do,” Hull recalled his uncle telling him. “Because if you are the best in the world at ants, you will make a ton of money. Universities will be offering you jobs, or every pest-control company will want you.”

Richmond’s only hostel is permanently closed; downtown building is up for sale

Richmond’s one and only hostel is gone.

Kleane Kare Team Inc. has a policy that its employees must get the annual flu shot.

The owner of Movieland at Boulevard Square near Scott’s Addition in Richmond wants to use part of its parking lot for drive-in movies.

The former vice president of MGT Construction Management Inc. was sentenced to two years and three months in prison Monday after pleading guil…

These days, it seems like every other TV commercial is for yet another insurance product.

The interim president and CEO of the Greater Richmond Partnership has been named to the role on a permanent basis.

The former chief financial officer of Eli Lilly & Co. is the most recent in a list of high-profile executives who have been forced out of …

WATCH NOW: Home-grown real estate business expands outside of the Richmond region into other states

CapCenter’s business model is catching on beyond the Richmond area.

Pat Hull, left, speaks to members of the UnBoundRVA Entrepreneurs class after he presented a $20,000 donation to UnBoundRVA's Sarah Mullens, right, from the Hull Foundation, Feb. 3, 2016. Mullens is co-founder and executive director of UnBoundRVA.

Pat Hull (left), president of Getloaded.com, and Ken Hammond, vice president of marketing with the same company, at the Petro Truck Stop in Caroline County. The company helps truckers find loads via computer to avoid travel with empty trailers.

Pat Hull, left, Sarah Mullens, and Royal McCargo react after Hull presented a check from the Hull Foundation to UnBoundRVA Entrepreneurs, Feb. 3, 2016. Mullens is co-founder and executive director of UnBoundRVA. McCargo is in the UnBoundRVA program as an entrepreneur. 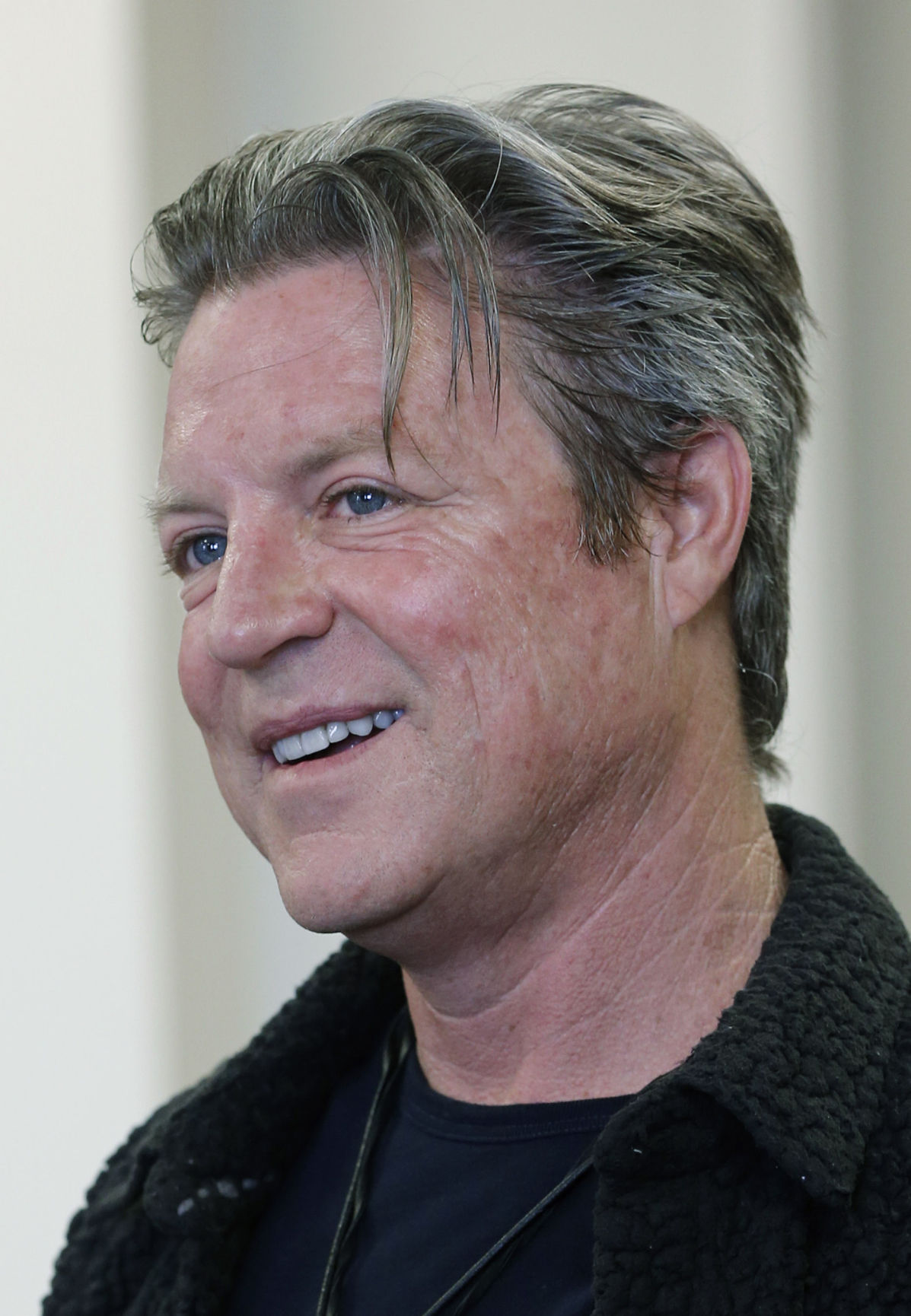