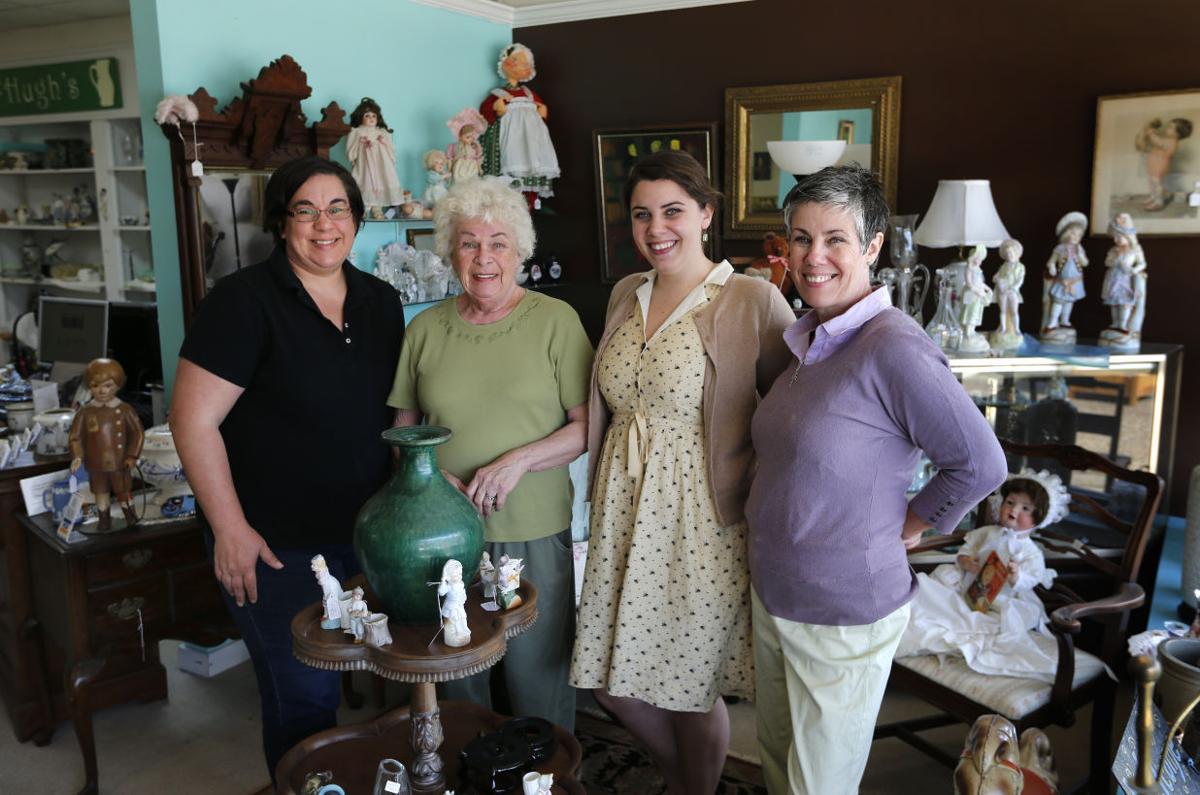 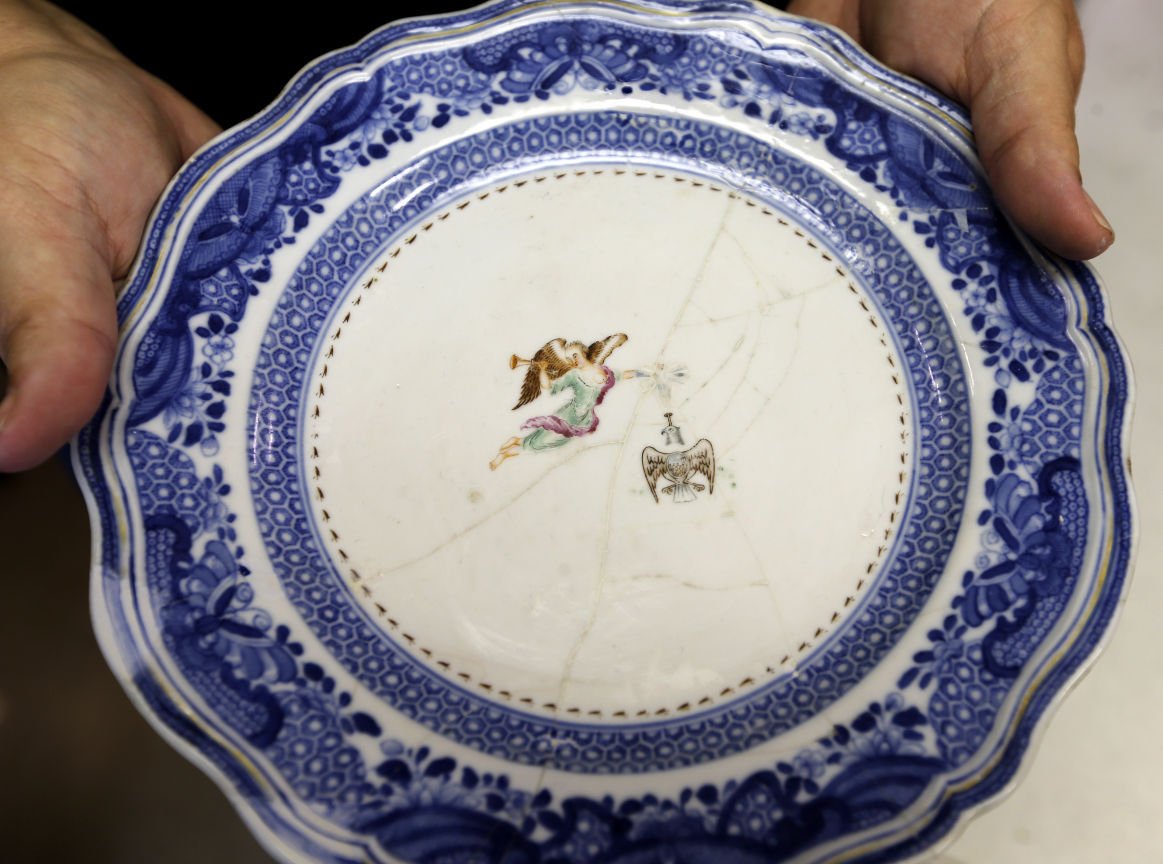 Brigid Jones holds a recently repaired George Washington plate at McHugh's Restorations. The plate was owned by initially by George and Martha Washington, and passed down through the Lee family.

Tony Manning of Richmond recently carried his Mexican Catrina Doll to McHugh’s Restorations to have the doll’s arm repaired.

“Their work is fantastic,” he said of McHugh’s. “I’ve been dealing with them for close to 25 years.”

Two years ago, Manning brought in a large glass centerpiece dish he had bought in Venice, Italy. “It was busted on one side and I asked if there was anything they could do about it,” he said.

Co-manager Brigid McHugh Jones asked Manning if she could make it into something else. “She made it into a three-clover dish and it’s beautiful.”

The family-owned McHugh’s Restorations traces its roots to 1975 when Louise McHugh and her now late husband, Desmond McHugh, opened an antique shop and doll hospital in Philadelphia.

The couple moved to Petersburg and opened a doll hospital there in the late 1970s. After that business closed, they started McHugh’s Restorations in 1980 in Carytown. The company moved to its current location on Patterson Avenue just east of Libbie Avenue in 2007.

“The business evolved into restorations,” Louise McHugh said. “In a lot of people’s minds, if you fix one thing, you can fix other things.”

Most of the McHugh’s Restorations’ customers are in central Virginia, but some travel from Maryland, Northern Virginia and Williamsburg.

“People also ship items in from all over the U.S. and internationally,” said McHugh’s daughter, Kimberley Overman, who now owns the business and serves as co-manager with Jones, her sister. “The farthest shipment was a very rare art glass shade from Japan.”

The company has repaired a number of porcelain items for Kitty Claiborne of Richmond. “They are first class. They are a very talented group,” she said.

Overman and Jones learned the art of repairing objects by apprenticing with their parents. Both also traveled to England for instruction in repairs.

“Kim and I came up with a lot of the techniques we employ,” Jones said. “A lot of it is our own adaptation. Nothing teaches you better than doing it.”

Some repairs are straightforward but others are much more complicated, such as the antique Paris vase sent to McHugh’s Restorations from the Hay House, a historic home in Atlanta. The vase had been knocked off a mantle and was in dozens of pieces.

“It took days of laying the pieces out and sorting through boxes of debris,” Jones said. “That was the most difficult job I have ever done.”

McHugh’s Restorations also has repaired a Washington plate and a Lincoln plate once owned by the respective presidents.

The Lincoln plate, part of a set of china, was ordered by Mary Todd Lincoln and used in the White House.

“It was purchased at a Virginia auction by descendents of the Todds who were from North Carolina,” Overman said. “They picked it up and drove it to us.”

The Washington plate, currently owned by a Richmond resident, was part of George Washington’s dinner service adorned with the emblem of The Society of the Cincinnati, a patriotic organization.

“There were only 300 pieces original to that service,” Overman said. “It descended through the Lee family. It was a repair that was sent to us by a referral.”

The plate was the second George Washington item McHugh’s Restorations restored. The first was a tea caddy and tea bowl set from Mount Vernon also with the Society of the Cincinnati emblem.

“At Mount Vernon, only 25 percent of the objects were original to Washington. Those objects never leave the property,” Overman said. “Brigid and I were the first citizens to ever leave Mount Vernon with a Washington object. Now they have their own conservation lab there.”

Many of the items McHugh’s Restorations repairs are very sentimental and can’t be replaced.

“When that piece breaks they are devastated,” Jones said. “The sentimental stories are the stories we remember.”

McHugh’s Restorations is an official restorer for the mid-Atlantic region for Lladro collectible, decorative figurines.

“They are very popular items,” Overman said of the figurines. “That’s one thing that people will travel here for.”

McHugh’s Restorations’ sales have increased every year since 1980.

“Our business never dropped off during the recession,” Overman said.

Dale Clark of Chesterfield County carried a porcelain fruit basket to McHugh’s Restorations that his dog had knocked on the floor.

“You can’t tell where the repair is unless you study it hard,” he said. “They also did some figural 18th-century Chelsea candlesticks for me. They are very talented and also reasonably priced.”

What is it?: Repairs dolls, ceramics, glass and decorative objects

Employees: Four, including the owner

Brigid Jones holds a recently repaired George Washington plate at McHugh's Restorations. The plate was owned by initially by George and Martha Washington, and passed down through the Lee family.