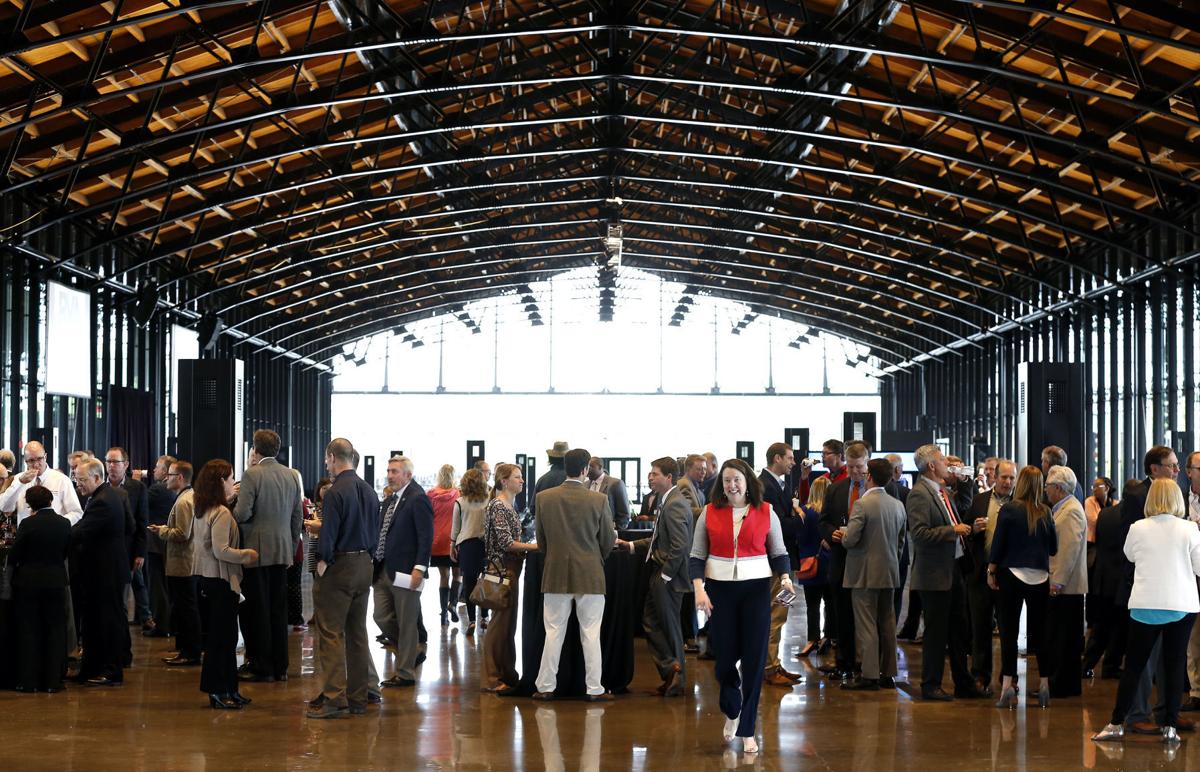 Lucy Meade, Director of Marketing and Development with Venture Richmond, (center right,) prepares for the Downtown Development Forum during the networking portion of the event at the Main Street Station shed in Richmond VA Tues. April 25, 2017. 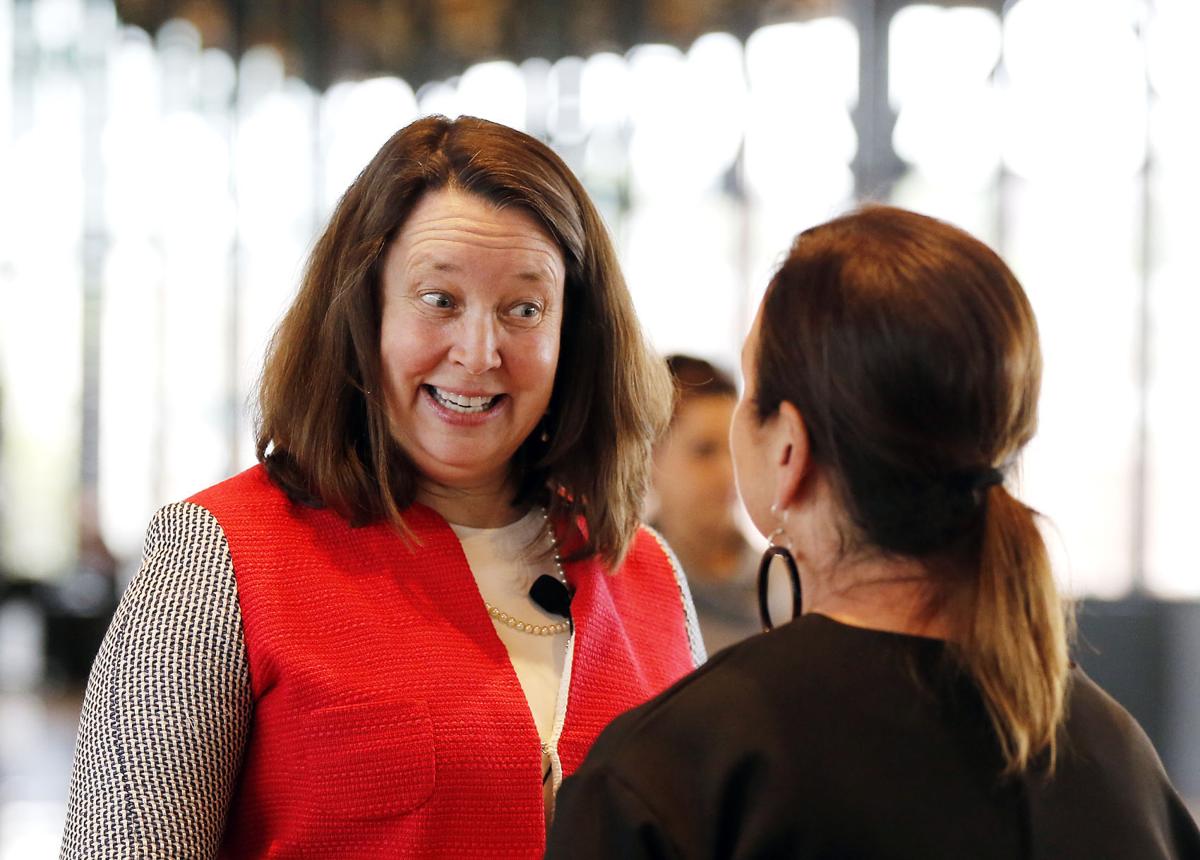 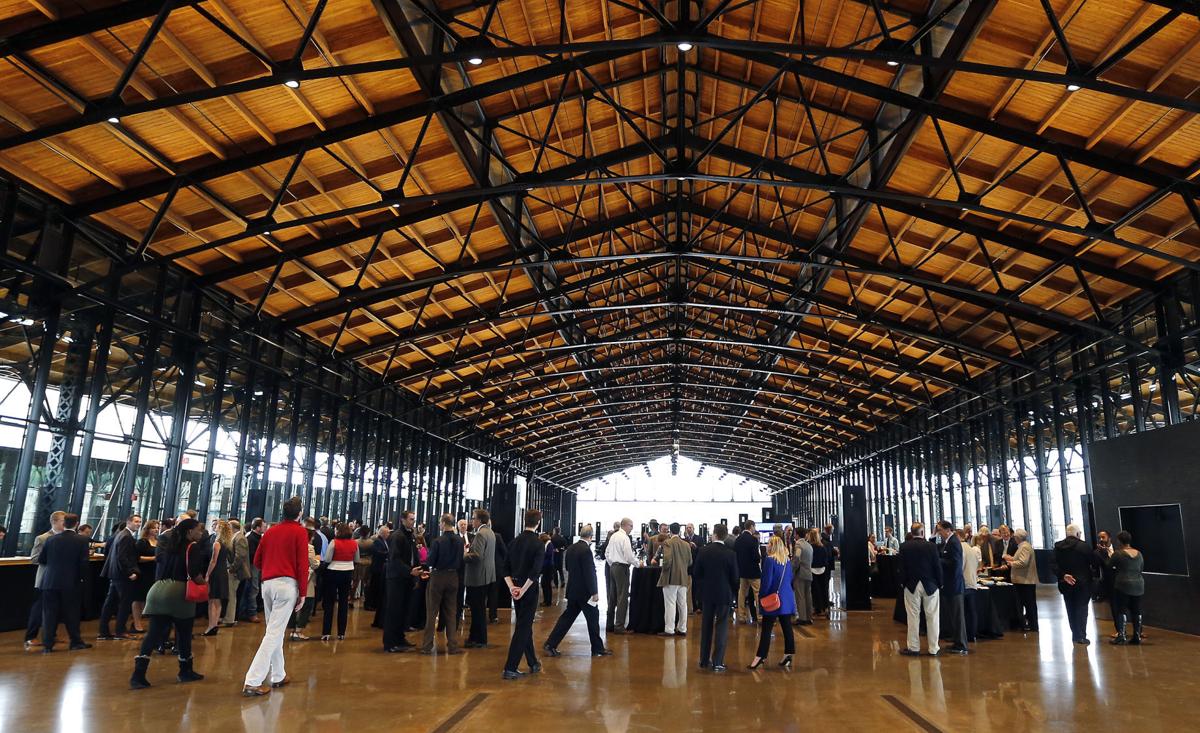 People gather during the networking portion of the Downtown Development Forum at the Main Street Station shed.

“What’s so interesting this year is the city and property owners have leased 300,000 square feet of office space in the last six months,” said Lucy Meade, director of marketing and development for Venture Richmond.

The downtown advocacy group partnered with the city of Richmond and the Greater Richmond Association for Commercial Real Estate to present the annual Downtown Development Forum on Tuesday night.

More than 80 residential and commercial projects recently completed or underway were highlighted.

Hundreds of people attended the event at the Main Street Station Shed, one of the projects hailed at the forum. “No city has a structure like this in the commonwealth,” Richmond Mayor Levar Stoney said about the 500-foot long, glassed-in “shed.”

“This is a beginning point for what we can do as a city,” said Stoney, the first of about 18 speakers.

“These companies want to be in the urban area,” Meade, who served as the emcee, said before the event. “Millennials love working downtown. They love the outdoor activity with the James River and the Virginia Capital Trail and walking to restaurants.”

In introducing Andy Florance, founder and CEO of CoStar, Meade said his company’s lease of nearly 100,000 square feet in the WestRock building at 501 S. Fifth St. was “the rock star of all leases that RVA has seen in the last couple of years.”

Florance, who presented a data-driven view of the Richmond area, said there are only six residential units for every 10 new households here.

He noted a shortage of 20,000 housing units here. “So there is tremendous demand for the projects you will see today,” he said.

“One thing that keeps the Richmond economy healthy is the rate of rent growth matches income growth,” Florance said. That is not true in Washington, where income growth is not keeping pace with high rents.

Also exciting are all the hotel renovations, Meade said. “New types of hotels are opening and we’re seeing renovations of several big hotels; all this is great for tourism.”

Jack Berry, president and CEO of Richmond Region Tourism, told the group that a Moxy hotel, a new Marriott-branded boutique hotel, is scheduled to open in an eight-story brick building at Fifth and Franklin streets in late 2018. “This brand is so unique that only cool destinations get it, and we are that.”

Meade noted that the state is getting ready to invest $300 million in projects on Capitol Square, “which is clearly important.”

Speaker Roy Grier with Dominion said a second tower that will connect with the first one is not officially approved at this time, but is likely to proceed and the targeted opening is 2022.

South of the James River, developers Robin Miller and Charles Macfarlane are doing infill projects on formerly vacant lots in the Manchester neighborhood. “They’re filling in the missing teeth and recreating an urban neighborhood,” Meade said.

“Manchester is hot as a firecracker not only for rental property but also for-sale properties,” said Miller, who spoke at the event.

He and his business partners have built 14 modern, energy efficient residential buildings in Manchester in the past year or so. All but one have sold, and that one is under contract.

7West, a luxury 12-unit town house project, is rising along the river at the southern base of the Manchester Bridge. “We have just started construction, and six are under contract,” Jeremy Connell, the developer, told the group. The average sales price, he said, is $840,000.

Macfarlane, who also spoke at the event, estimated that more than $1.3 billion has been invested in downtown Richmond in the past year and that figure does not include state projects, the Dominion office tower or developments by Virginia Commonwealth University.

Lucy Meade, Director of Marketing and Development with Venture Richmond, (center right,) prepares for the Downtown Development Forum during the networking portion of the event at the Main Street Station shed in Richmond VA Tues. April 25, 2017.

People gather during the networking portion of the Downtown Development Forum at the Main Street Station shed.