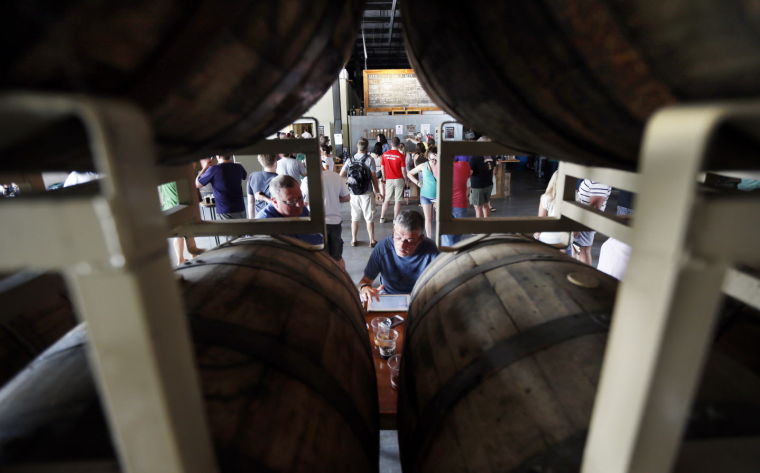 Hardywood Park Craft Brewery’s tasting room, where beer is available in samples and by the glass, is open five days a week.

Perhaps it’s no surprise Richmond is fixated on craft beer.

This city has always been interested in history, and beer is very much a part of Richmond’s history.

In 1866 D.G. Yuengling Jr., a member of the famous Yuengling clan in Pennsylvania, came to Rocketts Landing to found the James River Steam Brewery. A fire destroyed the brewery in 1891, and only the caves used to store beer remain. Earlier this year they were designated a historic landmark.

And in 1935, Richmond was test market for the first-ever canned beer. Krueger Brewing Co. of New Jersey partnered with American Can Co. to put cream ale in cans.

Today local brewers are trying to show that beer in a can doesn’t have to equal a cheap or watery brew. Center of the Universe Brewing Co. in Ashland uses cans for most of the beer it sells off-site. Hardywood Park Craft Brewery makes a cream ale that is a tribute to that 1935 brew, and also cans one of its India Pale Ales.

Craft brewers in Richmond and the surrounding counties are now mixing that history with new styles of beer and tasting rooms designed to draw drinkers from across the country. As the number of breweries and local beers grow, the industry is trying to find its footing in a competitive landscape.

In 1995, An Bui’s family paid $70,000 to buy an existing restaurant at 6004 W. Broad St. Bui was studying hotel management at J. Sargeant Reynolds Community College at the time, so his family put him in charge of running the place.

Mekong started carrying a few Belgian beers in 1997, in an attempt to stand out from restaurants that focused on wine.

Today the restaurant has 50 taps, and the bottle list is several pages long. When Bui announced his plans to start a brewpub next door to Mekong, he pledged to serve only the beer he makes inside the brewpub, leaving Mekong’s open taps to carry the beer he buys from distributors and local breweries.

Mekong was voted the top “Great American Beer Bar” on CraftBeer.com two years in a row, and will compete for that crown again this fall. When Bui celebrated last year’s victory with a week of beer specials, the restaurant went through 209 kegs of beer, compared with 25 or 30 in a normal week.

Bui’s role in the local craft beer sector grew even bigger last week with the news that he was buying Commercial Taphouse. Commercial, on North Robinson Street in the Fan, opened 20 years ago. Owner James Talley was one of the first restaurateurs to assemble a draft list heavy on craft beers, and Bui told Richmond.com that taking over the restaurant is like “opening a legacy.”

Bui plans to change the food menu but not the focus on craft beers.

The Richmond region is now home to 11 craft breweries. Bui’s new brewery — The Answer Brewpub — will make 12. Other entrepreneurs are in the planning stages and seeking capital to fund their proposed breweries.

All of this activity doesn’t take into account a booming beer scene in Charlottesville, Nelson County, Roanoke and Lynchburg. Each of those areas is now home to multiple breweries.

Earlier this month, Blue Mountain Brewery — which has a brewpub at the northern edge of Nelson’s Rockfish Valley and a production facility on U.S. 29 — announced it would buy South Street Brewery. South Street, which was founded in 1998, was a pioneer of the Virginia beer industry along with Starr Hill Brewing Co. and Richmond’s Legend Brewing Co.

Blue Mountain said it would reopen South Street in the fall after a remodeling job. The brewpub, just two blocks from Charlottesville’s popular Downtown Mall, will serve both South Street and Blue Mountain beer when it reopens.

Eric McKay, president and co-founder of Hardywood Park Craft Brewery in Richmond, said the surge in new breweries will bring challenges. He said restaurants and bars are now more likely to quickly rotate the beers they have on tap, making it harder for a brewery to build loyalty.

“It’s a growing trend, because the supply of individuals beers is so much greater than the number of draft lines and amount of shelf space,” McKay said.

Bars also like to carry specialty “one-off” beers, but McKay said those are more expensive to produce and don’t generate the same brand loyalty that a flagship beer does.

But the fierce competition for tap and shelf space also is a sign of drinkers’ interest in buying Virginia-made beers.

“It is incredible to see the embracing of Virginia craft beers,” McKay said. “The appreciation for local beer is at an unprecedented level, and it will be exciting to see how it grows and evolves.”

Hardywood is now available in all parts of Virginia except Hampton Roads, though the brewery hopes to be distributing there by the end of 2014. McKay said the brewery is on pace to produce about 9,000 barrels of beer this year, which would be double the production in 2013.

Some statistics from the Brewers Association, the craft beer industry’s trade group, show how much room Virginia breweries have to grow. The state currently has 61 craft breweries that produced 129,000 barrels of beer last year. A barrel is 31 gallons, the equivalent of two standard-size kegs.

The state’s production ranked 29th in barrels produced per person in 2013. If Virginia’s beer industry was as big on a per capita basis as the brewing scene in Colorado or Oregon, it would have 321 breweries producing about 2 million barrels per year. The state’s production is about 6.5 percent of the capacity seen in those two states.

The association also said Virginia-brewed beers accounted for just 4 percent of the beer sold in Virginia last year. In Portland, Ore., about one-third of the beer consumed in that city is brewed in Oregon.

A key turning point in Virginia’s beer history was the passage of Senate Bill 604. That 2012 legislation allowed breweries to sell beer by the glass on-site, much as Virginia wineries do.

The change has been critical, as on-site sales boost brewers’ cash flow. That cash gets plowed back into additional staff, equipment and ingredients, speeding up the growth process. During this winter’s legislative session, another bill eased zoning restrictions on farm breweries, treating them more like farm wineries are treated.

Hardywood Park Craft Brewery, which opened in September 2011, was an early beneficiary of the new rules. Founders Eric McKay and Patrick Murtaugh had planned to open their tasting room — which was limited initially to small samples — just a few hours each week.

But when the law changed, Hardywood’s business changed too. The brewery now is open five days a week. Thursday evening food truck courts draw hundreds of visitors when the weather is nice. Saturday concerts or beer release parties can mean even bigger crowds.

Each person drinking beer by the glass, filling reusable growlers or buying bottles to go represents cash that flows directly to the brewery, without distributors or retailers taking a cut.

“For us, the number one marketing opportunity is to get people into the tasting room,” McKay said. “Tons of people in Richmond know Hardywood because of it. That will be a challenge as we enter markets away from our home base.”

Home brewers also are playing a role in Richmond’s beer renaissance. Increasingly they are also joining the professional ranks. Bui hired Brandon Tolbert to serve as head brewer of The Answer. The pair met at a James River Homebrewers meeting several years ago when Tolbert offered Bui a sample of an India pale ale.

When Extra Billy’s Barbecue — which has brewed beer for years at its Chesterfield County location — decided to hire a full-time brewer, it tapped Tolbert. And now that Tolbert is going to work with Bui, another home brewer, Dylan Brooks, will take over at Extra Billy’s.

Brooks, an award-winning home brewer, plans to focus on American ales, though he’s made everything from barleywines to Belgian-style ales.

Ben Petty, Hardywood’s regional sales manager, said each new brewery that opens forces the other beer makers to grow and evolve. Anyone who makes OK beer rather than excellent beer won’t thrive in this market, Petty said.

On the heels of the National Beer Expo, which saw breweries and beer lovers from across the country visiting Richmond earlier this month, Murtaugh said more breweries will continue to mean more beer tourists.

“People always talk about the breweries in Asheville, and Richmond is getting there,” Murtaugh said. “I’m sure there will be more competition, but for the city this is a positive thing.”

Buzz has circulated for months about Richmond possibly landing the brewery, but the city is taking action this week in hopes of sealing the deal.

Traditionally, beer consists of four ingredients: grain (barley is the staple, with wheat prominent in some brews; adjuncts such as rice and c…

See the locations for craft breweries around Virginia.

Hardywood Park Craft Brewery’s tasting room, where beer is available in samples and by the glass, is open five days a week.