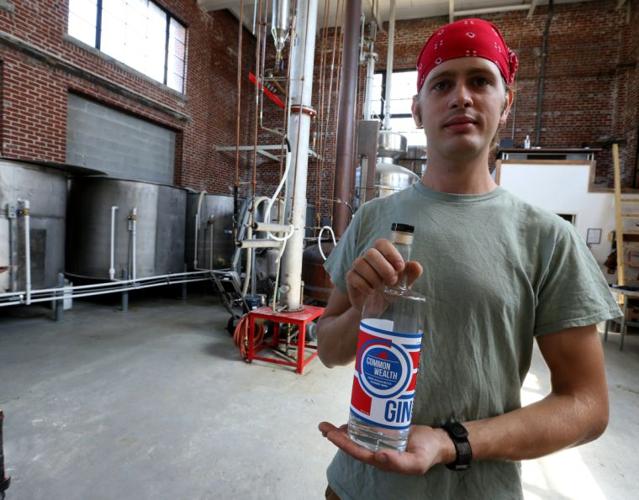 Dwight Chew, head distiller for James River Distillery in Richmond, Va., holds up a bottle of the product, which was delivered to the state ABC warehouse for the first time Monday. 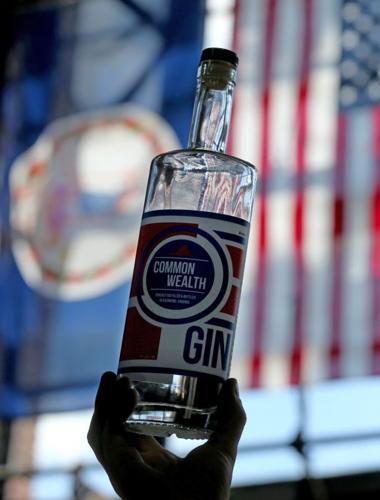 Dwight Chew, head distiller for James River Distillery in Richmond, holds up a bottle of the product before it is delivered to the state ABC warehouse. 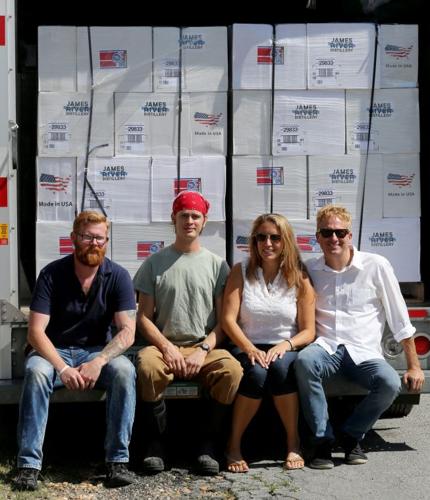 The North Richmond distillery delivered 120 cases of Commonwealth Gin three blocks down the road to the Virginia Department of Alcoholic Beverage Control on Monday. That’s 1,440 bottles of gin, each containing 750 milliliters of spirits.

The company is run by Kristi Croxton, Jonathan Staples and Matt Brophy. Staples, who was born and reared in Richmond, said he believes this is the first gin distilled in Richmond — at least legally — since before Prohibition.

Croxton said the gin will be available at more than 100 ABC stores around the state, including several in the Richmond area, by the end of this week or early the following week, with a retail price of $33.90 per bottle.

“Gin is seeing a big resurgence,” Croxton said. “The classic cocktail is back.”

Staples said the top-selling gins in the United States are British.

Dwight Chew, the head distiller, has been working since November to get the equipment and first batch ready. He said it takes about two weeks to make each run of gin.

Chew said the distillery makes its gin from corn grown near Tappahannock. The corn is not genetically modified and is organically grown, he said.

Staples purchased the building and equipment — which previously was owned by Paul McCann and operated as Cirrus Distillery — at a 2013 bankruptcy auction. The Frederick, Md., native grew up in Richmond and drove past the auction on a whim.

He paid $375,000 for the building at 2700 Hardy St. and the distilling equipment inside. The distillery is in the same neighborhood as Hardywood Park Craft Brewery, which has drawn beer aficionados to the industrial neighborhood since opening in 2011.

Jacob Geiger is online business editor of the Richmond Times-Dispatch. He can be reached by e-mail at jgeiger@timesdispatch.com, by phone at 804-649-6874 or on Twitter at @TDBusinessDaily.

Elon Musk said that his planned $44 billion purchase of Twitter is "temporarily on hold" pending details on spam and fake accounts.

Like the first movie Mel Brooks produced, commercial real estate market participants have a case of high anxiety. Interest rates are high, cos…

GPM Investments, a Richmond-based company that operates one of the country’s largest convenience store chains, is planning to hire 5,000 more …

Musk says he would reverse Twitter's ban of Donald Trump

Tesla CEO Elon Musk said he will reverse Twitter’s ban of former President Donald Trump if his deal to buy the social media company goes through. Musk, speaking virtually at an auto conference, said Twitter’s Trump ban was a “morally bad decision” and “foolish in the extreme.” He said bans of Twitter accounts should be rare and reserved for accounts that are scams or automated bots. Musk earlier gave his support to a new European Union law aimed at protecting social media users from harmful content after he met with the bloc’s single market chief.

Here are some money traps and how to avoid them

Dwight Chew, head distiller for James River Distillery in Richmond, Va., holds up a bottle of the product, which was delivered to the state ABC warehouse for the first time Monday.

Dwight Chew, head distiller for James River Distillery in Richmond, holds up a bottle of the product before it is delivered to the state ABC warehouse.