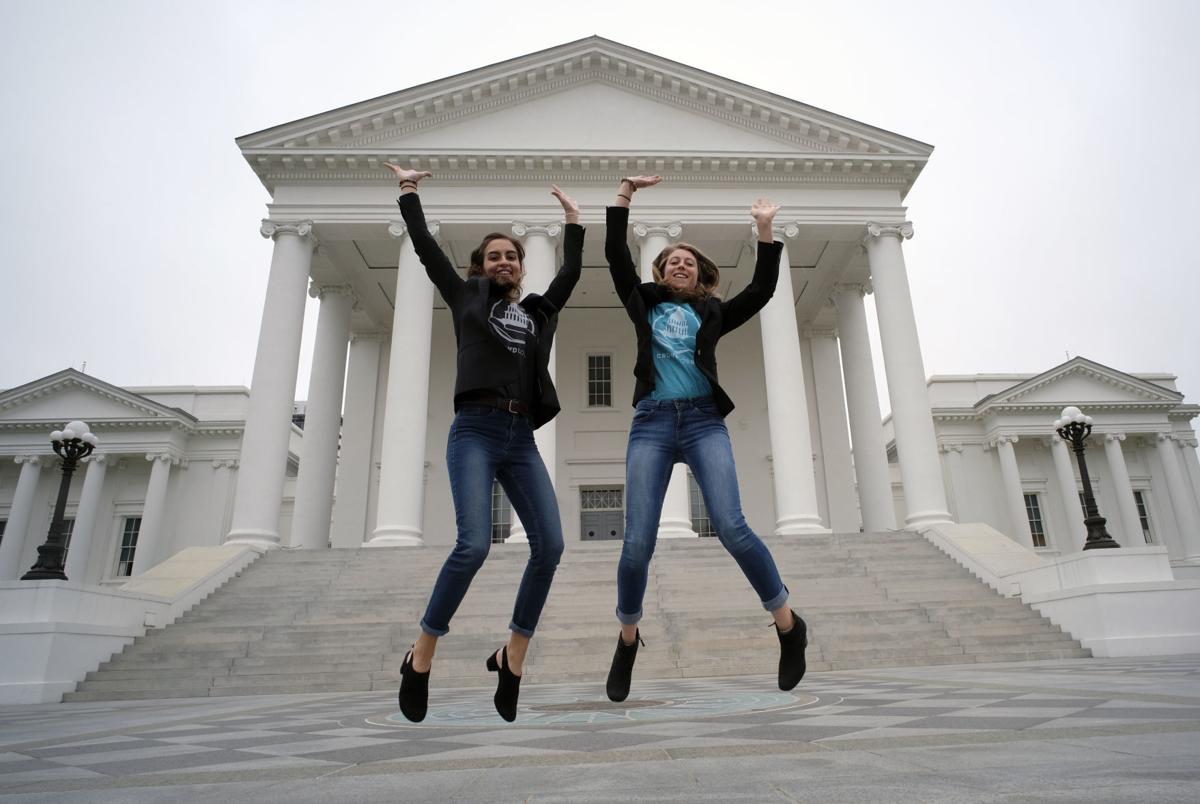 Samantha “Sam” Biggio (left) and Heidi Drauschak jumped in front of the state Capitol in Richmond. The recent graduates of the University of Richmond School of Law co-founded CrowdLobby, an online crowdfunding site where people can pool money to hire lobbyists for specific legislative issues. 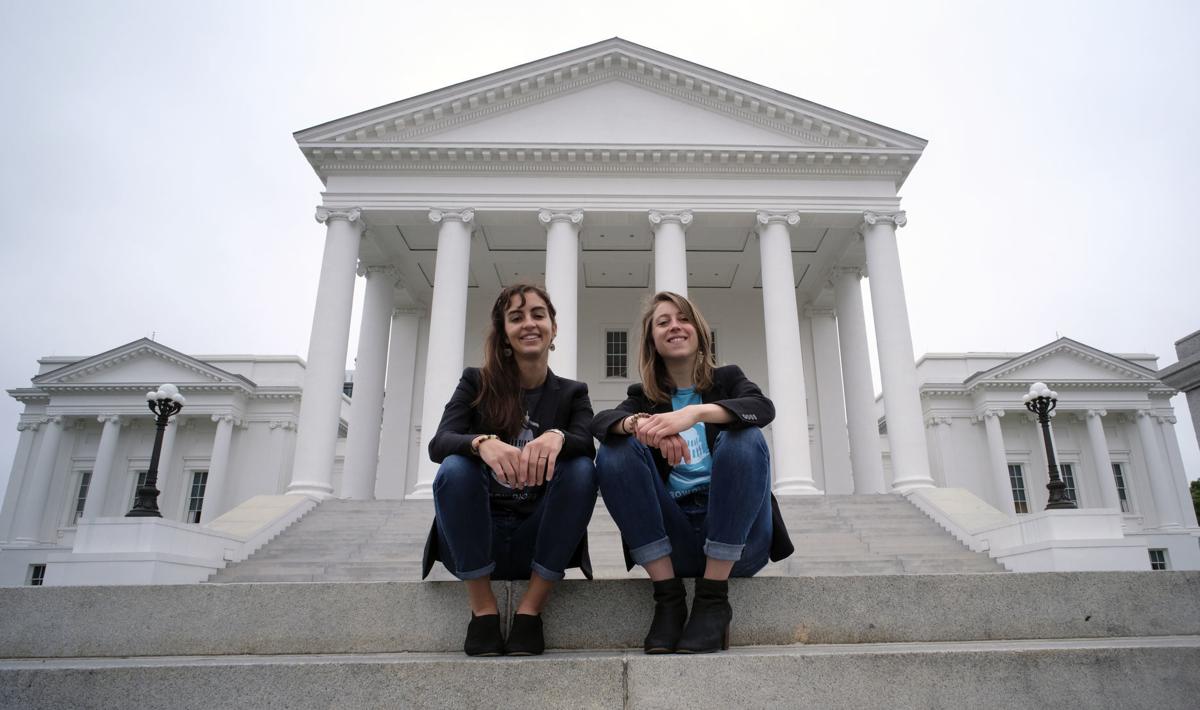 Sam Biggio (left) and Heidi Drauschak, seen at the Capitol, started their site before graduating from UR’s law school. 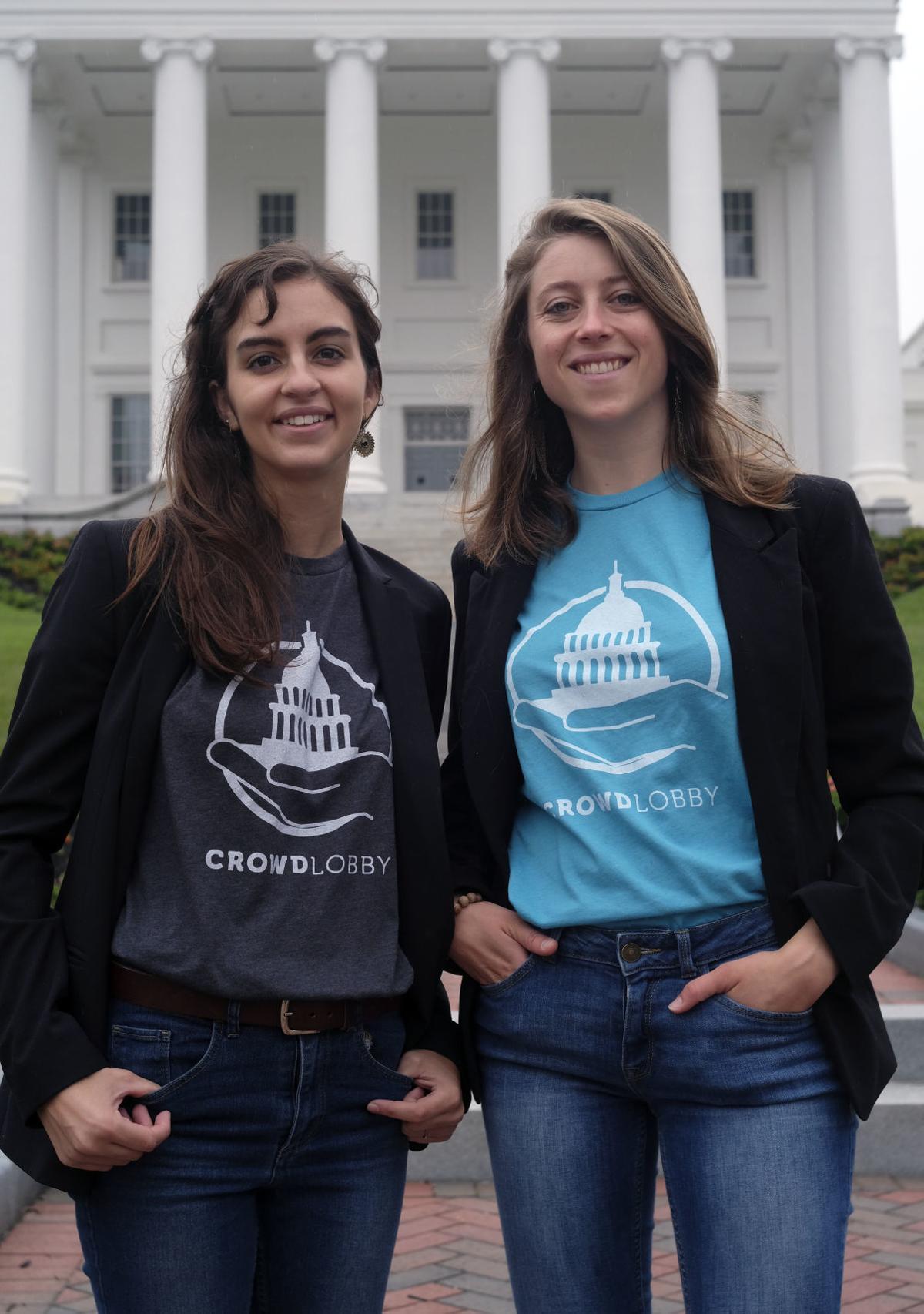 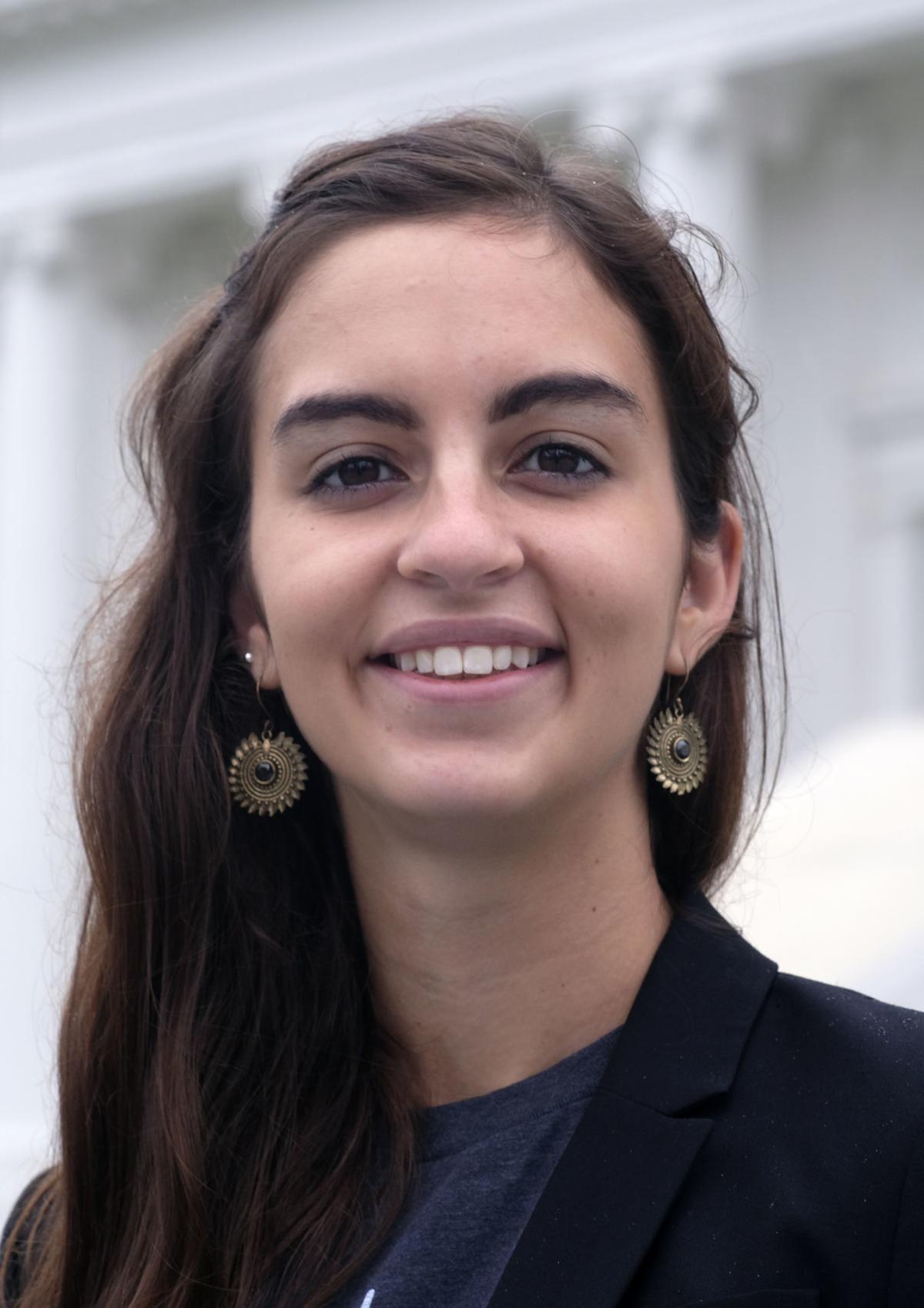 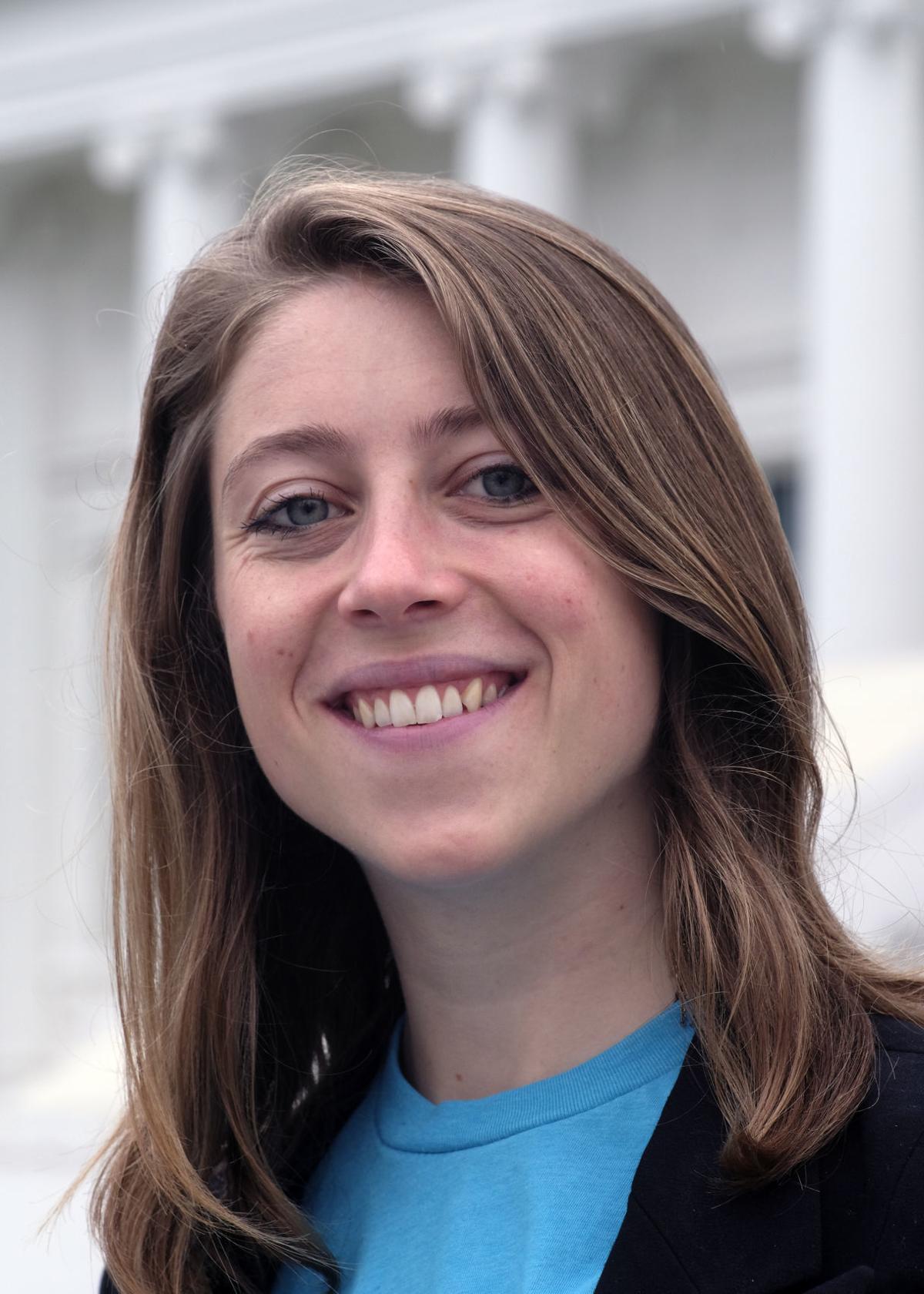 Professional political lobbying typically is viewed as the apparatus of big corporations and well-funded special interest groups that want to influence government policy — not the domain of ordinary folk.

Samantha “Sam” Biggio and Heidi Drauschak, two recent graduates of the University of Richmond School of Law, want to change that through their startup venture, CrowdLobby.

“I think lobbying has a really bad stigma, but it is mostly because a lot of us are locked off from it,” Drauschak said.

Drauschak said she had the idea for CrowdLobby a little more than a year ago while she was doing an externship at a law firm, where she got to see how the lobbying process works.

While still in law school, Biggio and Drauschak teamed up to develop CrowdLobby.

The online platform is designed to work much like other crowdfunding sites, such as Kickstarter or GoFundMe, that enable large numbers of people to contribute money to a particular project, event or cause. The idea behind CrowdLobby is to enable people to pool financial resources as a crowd to hire professional lobbyists to work on specific legislative issues.

Lobbying “is a tool the corporations and special interests have used for decades,” Drauschak said. “At CrowdLobby, our overarching mission is to give everyday people a new voice in their government.”

CrowdLobby operated on a small scale in Virginia last year, but Biggio and Drauschak now want to relaunch the site with a bigger scope, expanding to other states and opening the platform to national issues.

Biggio, who is from Herndon, and Drauschak, who is from Philadelphia, have been putting in a lot of miles the past few weeks, holding events not just in Richmond but in Philadelphia, Washington, D.C., and San Francisco to raise money to further develop its technology platform.

To raise money for their own crowdfunding site, they chose to do a crowdfunding campaign on Kickstarter. “The irony of that is not lost on us,” Drauschak said.

The goal is to raise at least $35,000 so that a revamped CrowdLobby website will be up and running by the fall. As of 5 p.m. on Friday, the Kickstarter campaign had raised $12,000.

Once the platform is running, the goal is for CrowdLobby to function as openly and transparently as possible, with some necessary boundaries and restraints, Biggio and Drauschak said. Anyone could submit a proposal to raise money for lobbying on an issue, but proposals would need to be vetted by CrowdLobby to make sure they are legal and amenable to “a specific legislative fix,” Drauschak said.

Also, CrowdLobby would vet proposals and green-light for fundraising only those that have evidence of broad public support. The purpose of that is to avoid becoming a platform catering to small groups of wealthy individuals.

“The idea behind that is we truly want to be a people’s lobby,” Drauschak said.

“What we are really trying to go after is those issues where a large percentage of the population is supportive,” Biggio said.

CrowdLobby itself would then hire the lobbyists. The venture would make money by taking a small portion of each dollar contributed.

“We honestly would be a nonprofit, except that nonprofits can’t lobby that openly,” Drauschak said.

One of the big challenges for the startup is to make itself known to people and encourage them to use the site, Biggio said.

“Once we get the site up and live, that is the easy part,” she said. “We just have to get people on board with it and understand how to use it and what its value is.”

Samantha “Sam” Biggio (left) and Heidi Drauschak jumped in front of the state Capitol in Richmond. The recent graduates of the University of Richmond School of Law co-founded CrowdLobby, an online crowdfunding site where people can pool money to hire lobbyists for specific legislative issues.

Sam Biggio (left) and Heidi Drauschak, seen at the Capitol, started their site before graduating from UR’s law school.