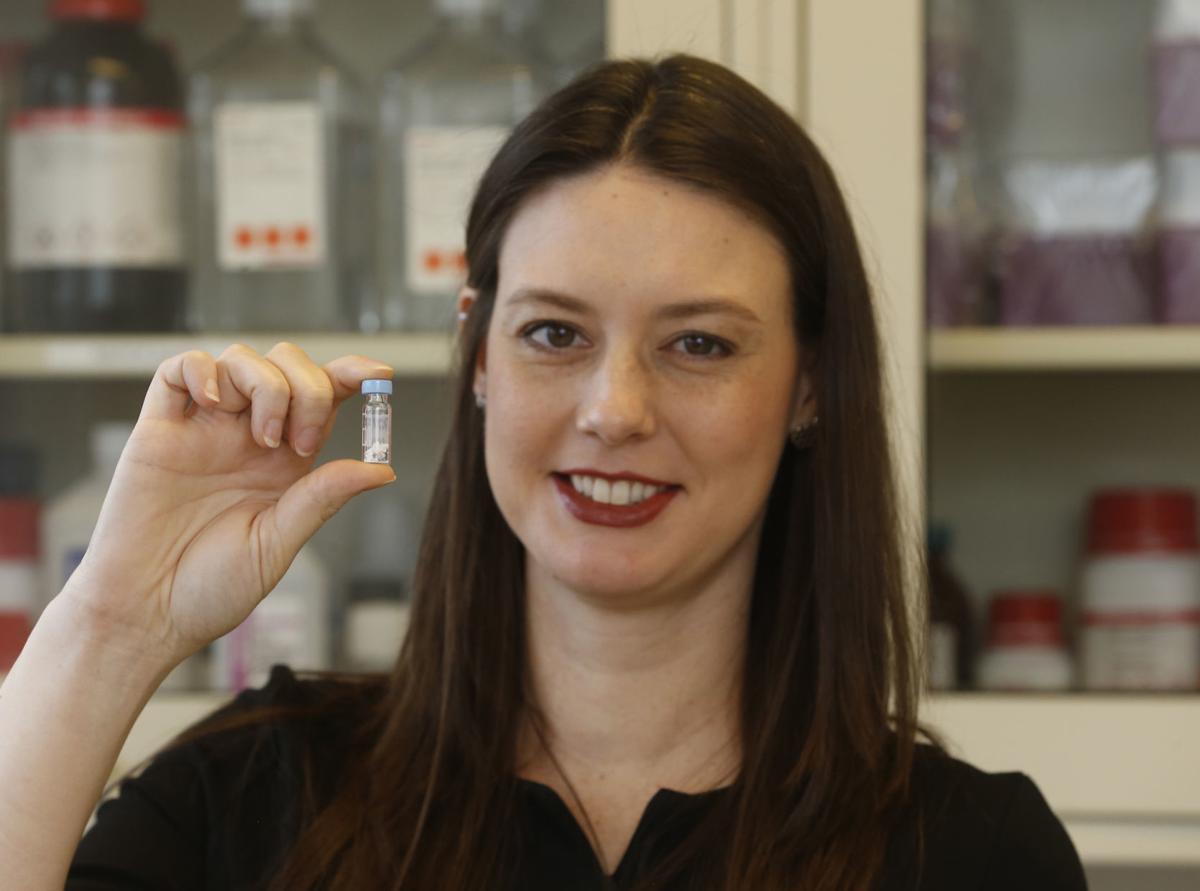 Elaine Horn-Ranney holds a sample of a gel, Perf-Fix, which the company is testing for use in eardrum repair surgery.

CEO Elaine Horn-Ranney (left) stood in the lab with employee Sitharn Nair on Jan. 23. The company moved to a larger lab space in July.

A startup company in the Virginia Bio+Tech Park in Richmond has moved one step closer to realizing a new medical treatment for eardrum repairs.

Tympanogen recently was awarded a $1.48 million Small Business Innovation Research grant from the National Institute on Deafness and Other Communication Disorders to help the company further its research.

Tympanogen was founded in 2014 by Elaine Horn-Ranney and Parastoo Khoshakhlagh, who both received doctorates in biomedical engineering from Tulane University. The company set up research operations in the Virginia Bio+Tech Park early in 2018 when Horn-Ranney moved to the Williamsburg area.

The company has developed a type of polymer hydrogel that it calls Perf-Fix, which can help with the repair of perforated eardrums by encouraging natural regeneration of the tympanic membrane. The gel can be applied in an office setting without the need for surgery or general anesthesia

Eardrum repair surgery is most often performed on children who suffer perforated eardrums as a result of chronic ear infections.

Horn-Ranney, the company’s CEO, said the Perf-Fix product could help more than 150,000 U.S. patients avoid surgery every year. The grant “is going to get us very close to submitting our product to the FDA for approval,” Horn-Ranney said.

“We are testing a prototype to make sure that when we load up the applicator with the gel, that it performs the way we want it to in the physicians’ hands,” she said.

The testing is expected to take about 12 months. The company’s goal is to submit its product to the U.S. Food and Drug Administration in 2020 and advance into clinical trials after that.

In July, Tympanogen moved into a larger laboratory space at the Bio+Tech Park in downtown Richmond.

“We are able to have more manufacturing equipment in there and do a lot more in-house testing and development,” Horn-Ranney said of the bigger space. “We have to outsource some of the manufacturing of the actual applicator. We are looking at bringing the assembly of the product in-house.”

In December, some of Tympanogen’s hydrogels were sent to the International Space Station aboard a SpaceX rocket. The gels could have medical use in space travel, and the experiment was designed to test how the gels form in microgravity compared with gravity on Earth.

Horn-Ranney said the company is preparing to publish the results of that research.

Richmond-area food retailers selling Thanksgiving meals are seeing a surge in the number of prepared food orders this year.

Elaine Horn-Ranney holds a sample of a gel, Perf-Fix, which the company is testing for use in eardrum repair surgery.

CEO Elaine Horn-Ranney (left) stood in the lab with employee Sitharn Nair on Jan. 23. The company moved to a larger lab space in July.