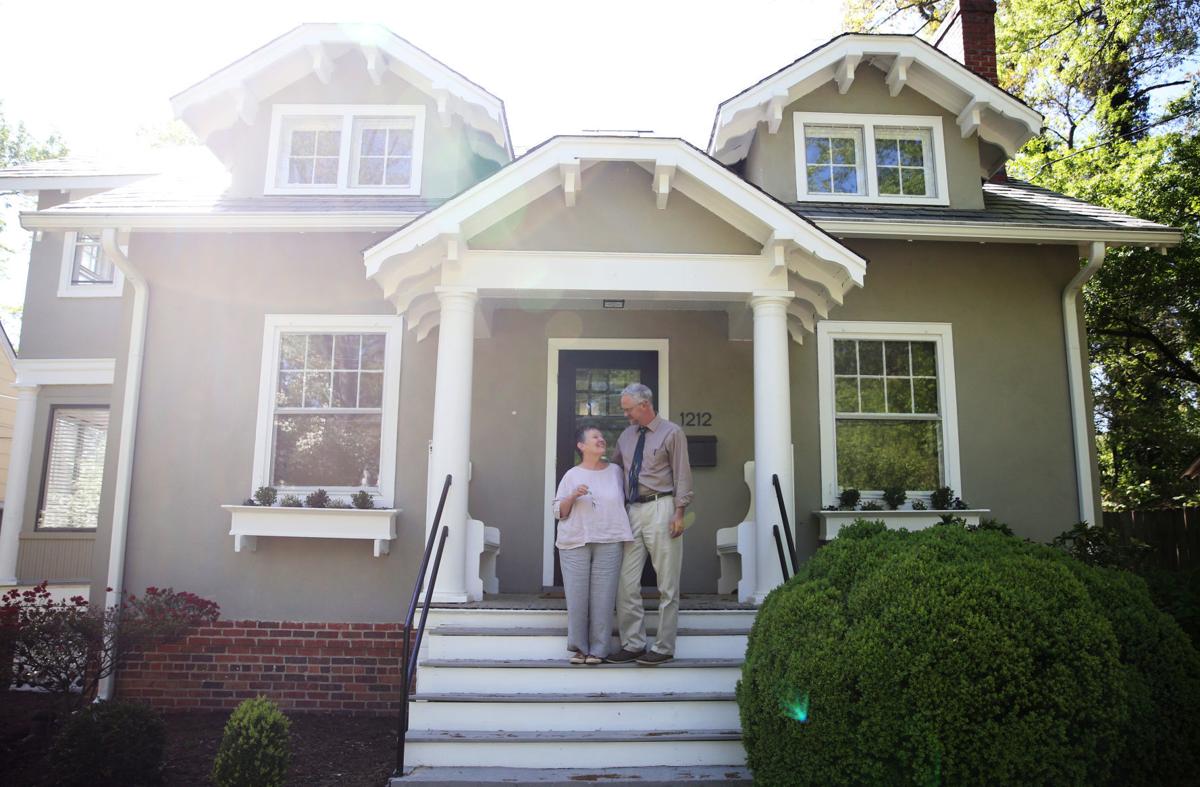 Meg and Jonathan Hamilton’s new home on West 45th Street in Richmond had 53 showings and 11 offers in 36 hours. 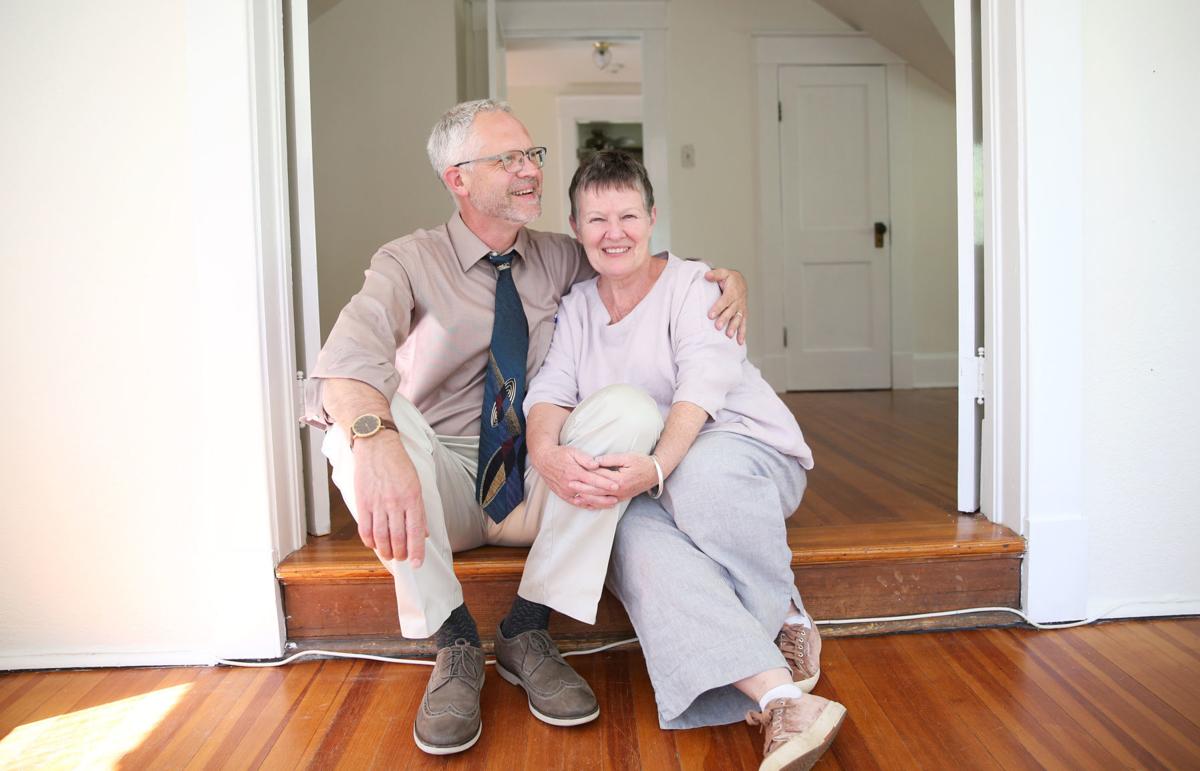 Jonathan and Meg Hamilton liked the natural light and 1940s details in their home when they first saw it. They wrote a letter to the buyer, added an escalation clause and waived an inspection to buy the home. 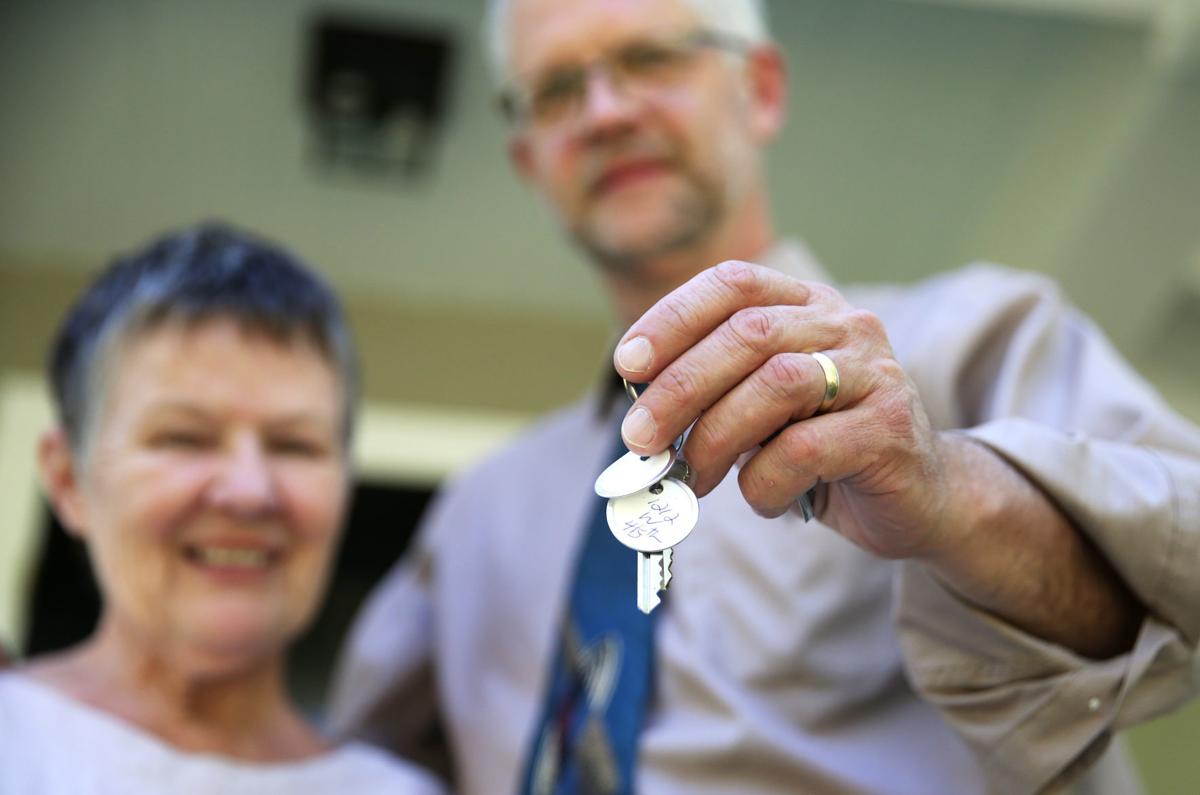 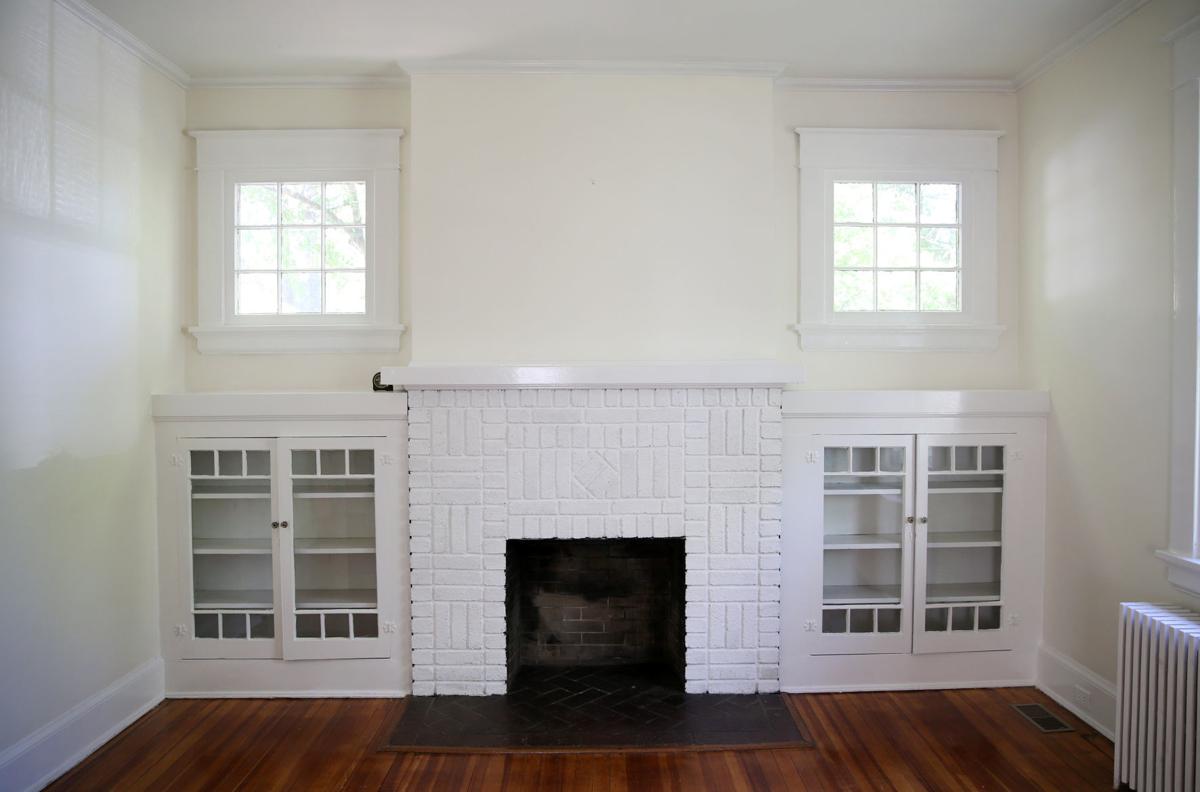 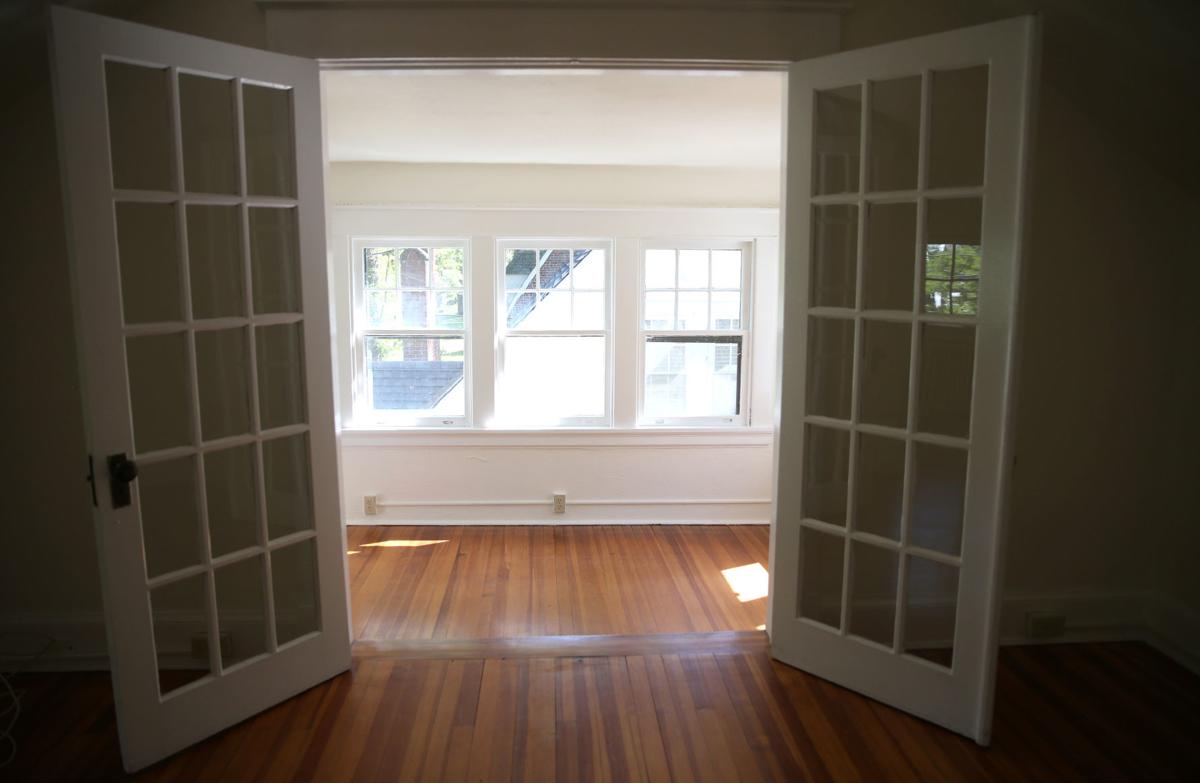 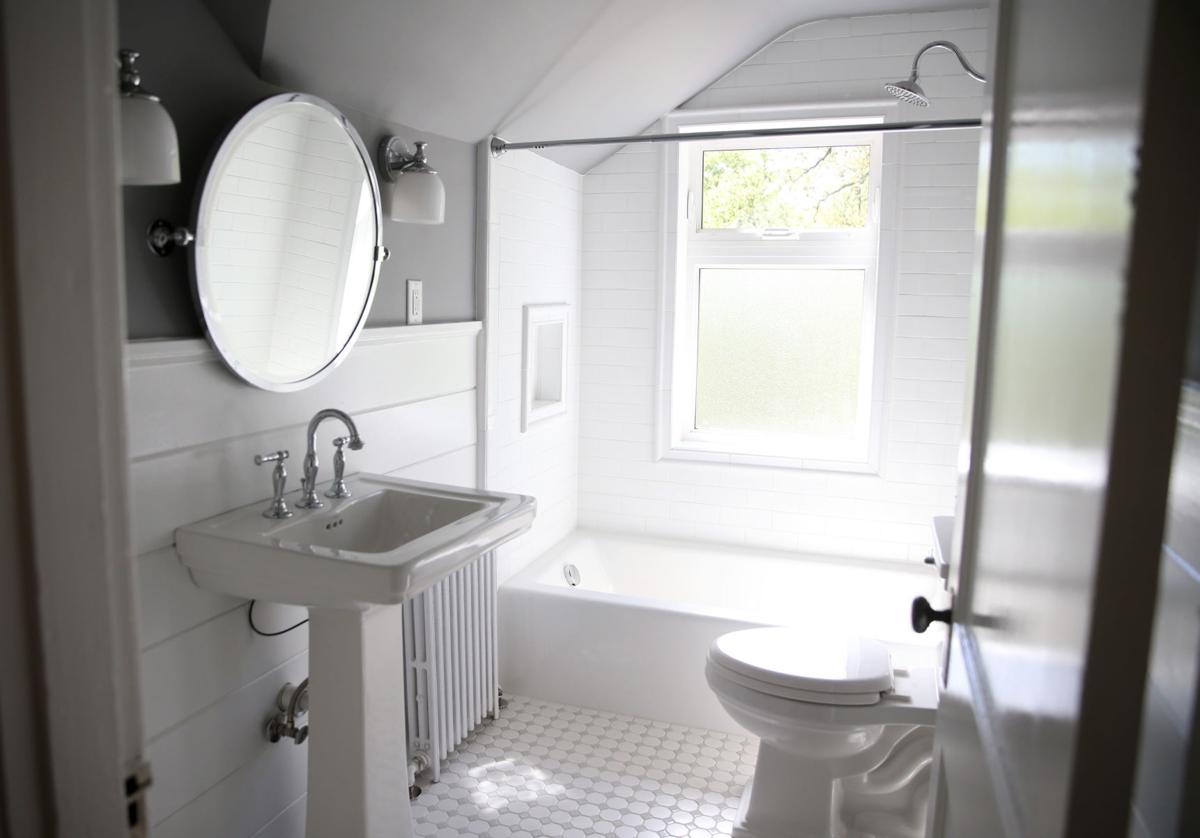 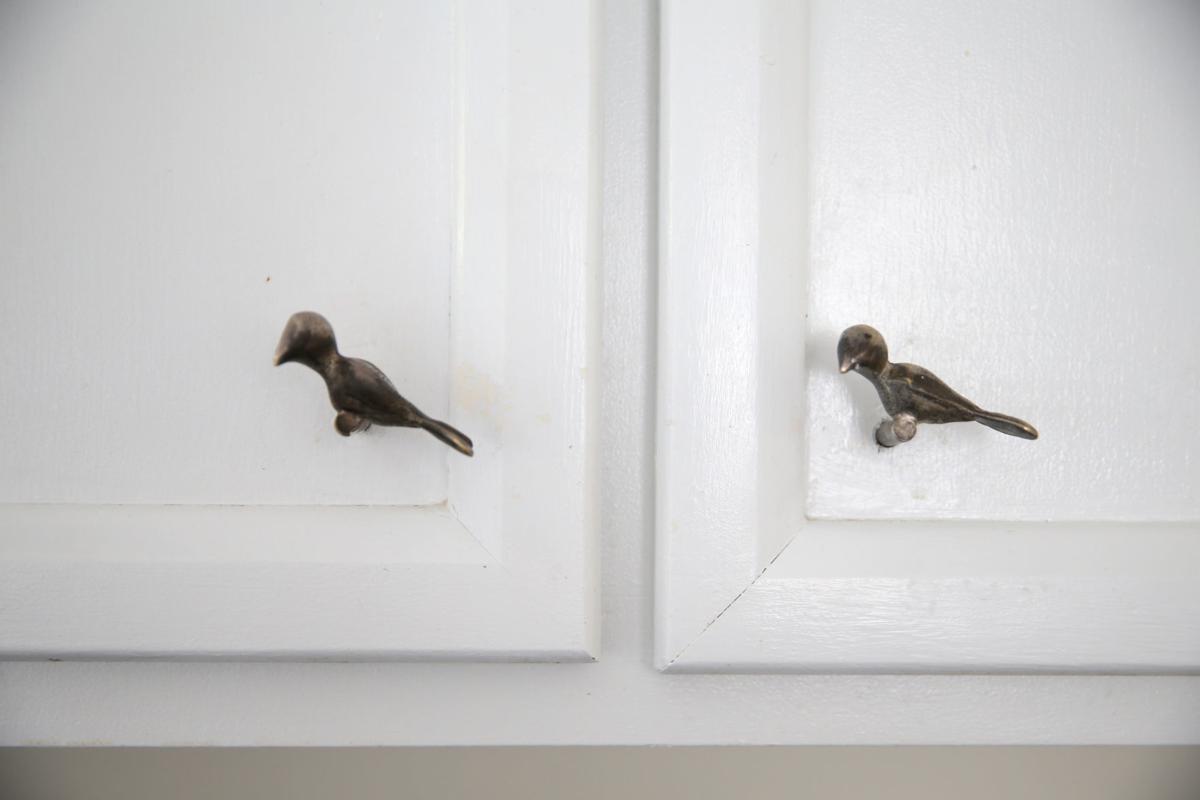 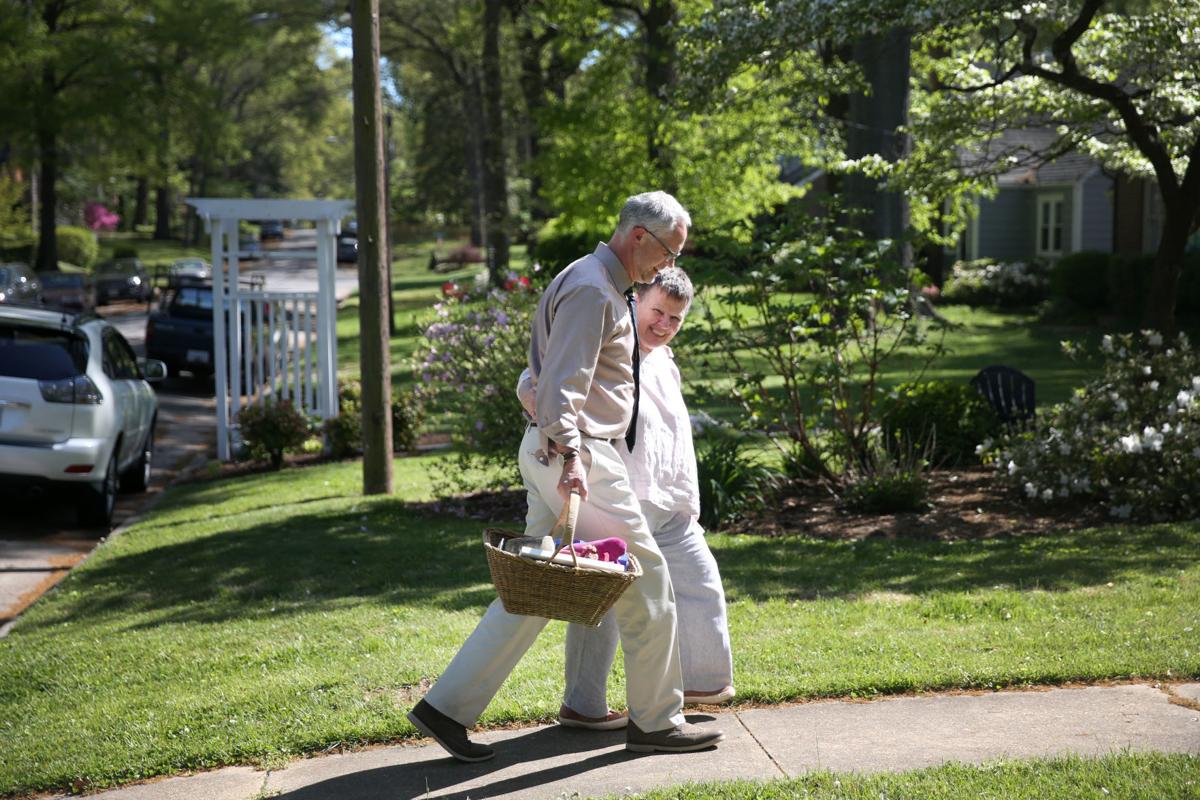 Jonathan and Meg Hamilton bring a basket of items to leave in their new home for luck on Monday April 30, 2018. In 36 hours, the home had 53 showings and 11 offers. 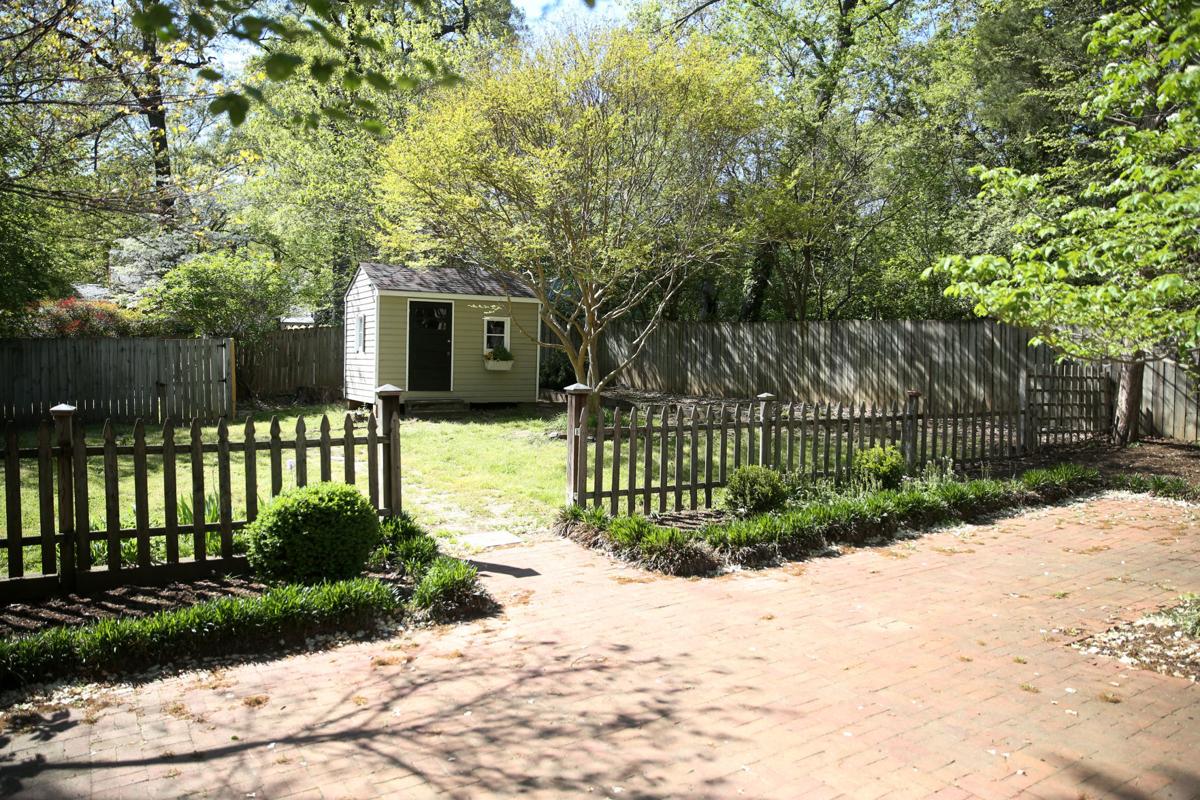 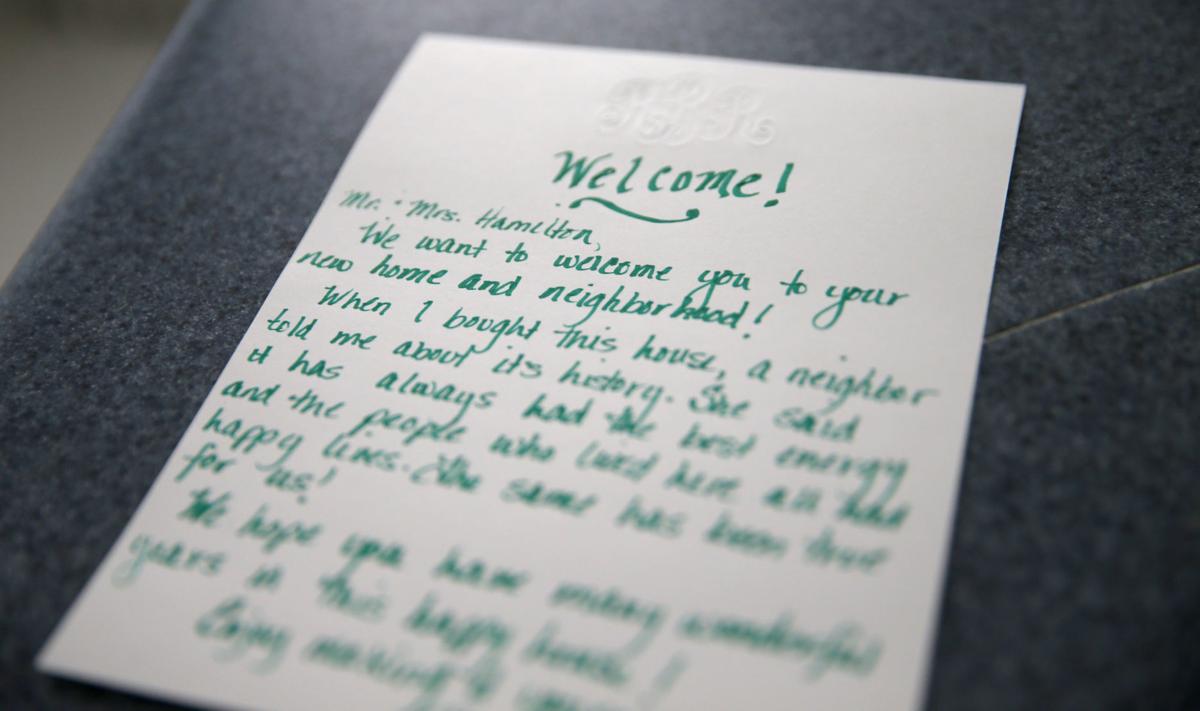 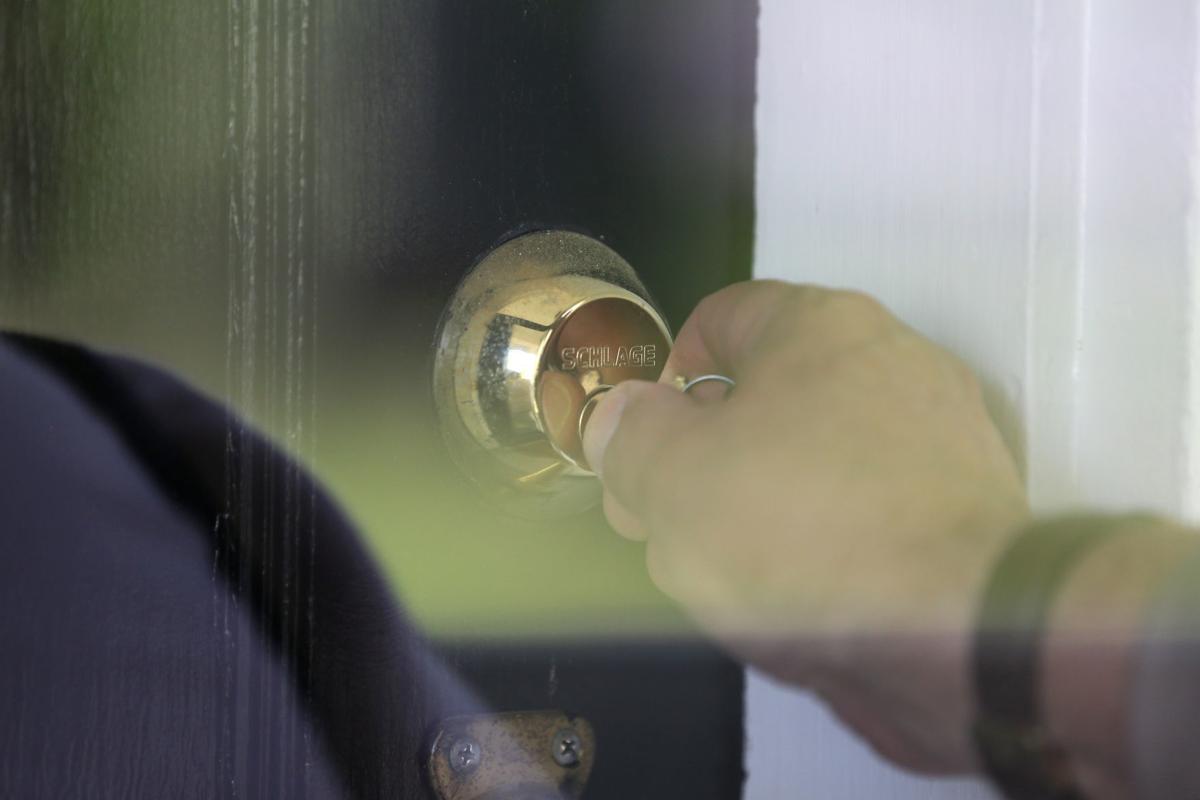 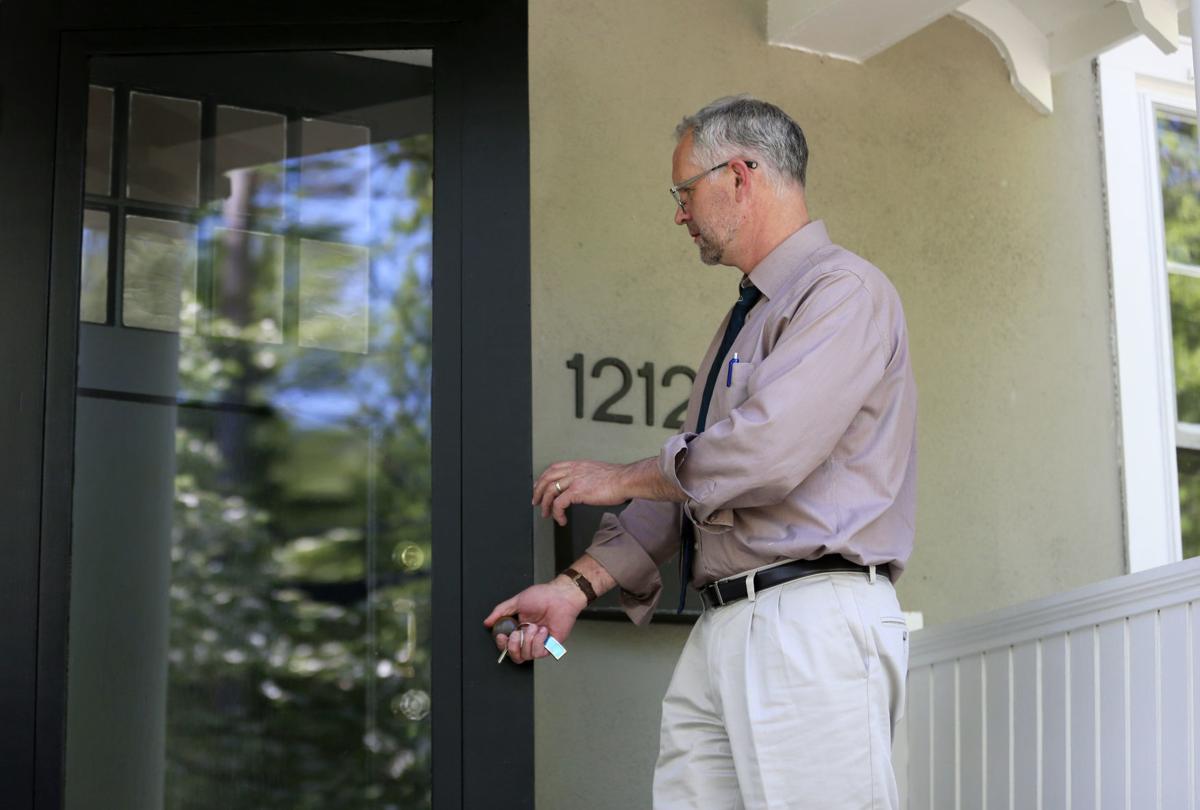 When a craftsman cottage in a popular Richmond neighborhood came on the market this spring, it was snatched up within days.

Eleven offers were made for the 1,469-square-foot house with three bedrooms and 1.5 baths.

“We made up our minds rather quickly, to say the least,” said Meg Hamilton, who bought the house with her husband, Jonathan.

“We were charmed by this home,” she said. “It was full of light with beautiful original details from the 1940s era.”

While they were looking for a home outside the city, they saw that this one had come on the market and drove by “just to take a look,” she said.

“To our surprise, the house was completely lit up and swarming with people. We had no idea there was an open house or that it was only going to be open for viewing for a day and a half. It seems serendipitous now that we happened to go there.”

They bought the house for $272,000 as is and with no concessions. They closed on it last Monday.

This year’s spring residential real estate market — the busiest time of year for home sales — is marked by a low inventory of houses for sale in the Richmond region.

Multiple offers in some areas are common along with personal letters, all-cash offers, inspection waivers and escalation clauses, allowing buyers to offer more if they are outbid.

A pristine house in a desirable location, if priced right, will sell in the first week, if not the first day, agents say.

Jeremy and Rachel Gladstone received multiple offers for their 2,400-square-foot house on Kensington Avenue in Richmond’s Museum District — listed for $595,000 — the first day it hit the market in late March. They found their next house in the Westham neighborhood in Henrico County before it went on the market.

“We were lucky,” Rachel said about their next home. “I love that area.”

She had learned through a casual conversation while walking her baby at the University of Richmond that someone was thinking about selling a house in Westham. “I knocked on the woman’s door,” she said. A deal was struck.

Agents say intense competition is happening in certain pockets of the city and surrounding counties — in areas like the West End, Church Hill and the Fan and Museum districts — but not everywhere.

“The inventory is the tightest I have seen in my 28 years in the business,” said Scott Shaheen, broker and co-owner of Shaheen, Ruth, Martin & Fonville in Henrico. He and co-owner Scott Ruth were co-listing agents for the bungalow on West 45th Street.

“Almost anything under $300,000 is a hot commodity,” Shaheen said. However, quick sales are taking place in all price brackets, including the $1 million-plus range, he said.

Shaheen attributed the low inventory to the real estate recession from 2008 through 2012, a period of slow growth and little new home construction. “We will feel that for the next few years.”

A total of 3,083 houses were sold in the Richmond area — encompassing the city of Richmond and Chesterfield, Hanover and Henrico counties — from January through March, up 2 percent from the same period a year ago, according to a first-quarter report by the Richmond Association of Realtors.

The median area price, with half the houses selling for more and half for less, was $244,195, up 6 percent from the same period a year ago, according to the report.

“In some cases, if you don’t have all cash, you’re not going to get the deal done,” said Sue Vaught, an agent with Joyner Fine Properties in Richmond.

“There is so much pent-up demand,” said Vaught, who is working with two out-of-town buyers who want to live in the downtown area. Each has a budget up to $500,000.

“We’re having a heck of time,” she said. One buyer is willing to look further out to the suburbs; the other isn’t.

Hope Egan, an agent with Keller Williams Realty, said millennials who want the urban lifestyle are competing with retiring baby boomers who downsize, sell the big house in the suburbs and offer cash for a small house close to the city.

They also are up against investors from Northern Virginia who are looking to buy and flip houses in the Richmond area at a profit, said Egan, who represented the buyers on the house on West 45th Street.

“A good amount of money is coming from outside Richmond competing with local people trying to find places to live,” Egan said.

Fast-selling houses are pretty and shiny, spruced up with fresh paint inside and out, new carpeting, landscaping and, in most cases, staging by professional designers.

“You can’t put any house on the market and expect it to sell,” Shaheen said. “It has to be priced right. If you overprice it and try to reach for the stars, it will sit.”

Home staging, where houses are decluttered and designers bring in furniture, pictures, flowers and pops of enticing color, has transformed the market, Egan said.

Even though buying a house is the single biggest investment for most people, it is almost always driven by emotions, Egan said.

The winning bid for the house on West 45th Street, which was lightly staged, included a letter from the buyers to the seller saying they had fallen in love with the house and would be good stewards.

The Hamiltons added an escalation clause and waived an inspection.

In the end, neither the emotional appeal nor the prospect for a higher price made the difference. It was the “as-is” offer, not contingent on an inspection.

“Having an older house is a concern, even though I did everything I could to fix it,” said the seller, Robin Bailey, who describes the house, built in 1942, as quirky and personable.

“I thought I might get two or three offers in a week; I never imagined 11.” Bailey lived there for 16 years and said she never expected to sell, but her circumstances changed.

In many areas, the market is more traditional, where houses sit on the market for weeks or a few months — like the brick rancher that Kellie Bonner and Barbara Layman bought in late April after months of being outbid or out-maneuvered on houses close to the city.

They wanted a move-in ready home in the upper $200,000s or lower $300,000s near their work in state government. They stayed in their price range but settled for a fixer-upper in Hanover County.

They had looked in Church Hill, Forest Hill and expanded further to Chester and the Stony Point area of South Richmond, only to lose out time and again.

“We were putting in offers and escalation clauses and writing letters about how the house would be wonderful for us and our dog,” Bonner said.

“It was crazy, and I was getting frustrated,” she said. “At one point, we decided we wouldn’t jump through any more hoops.”

Joan Peaslee, their agent, recalls showing them a house and writing an offer that same day, only to learn it was already under contract.

“The spring market is in full swing with a low inventory and lots of buyers, which is great for sellers,” said Peaslee with Berkshire Hathaway HomeServices PenFed Realty in Henrico.

Fed up with the market, Bonner and Layman considered building their own house before finding the house in Hanover.

If it had been renovated, it would have sold before they could make an offer, Bonner said. They negotiated the price to $300,000.

“It will be nice to focus on making it ours and not finding and making deals,” she said.

She offers this advice for other home shoppers: “Make an offer immediately, and make it high.”

Susan Swink, managing broker at Long & Foster at Stony Point and president of the Richmond Association of Realtors, said super-fast sales and multiple offers are occurring. “But it’s not the norm,” she added.

The majority of sales are contingent on whole house inspections and appraisals, and they are not all cash, Swink said.

“People are escalating prices if they want a particular neighborhood or school district but, for the most part, it’s not wild.”

The market is in good shape, despite low inventories and quicker sales, Swink said.

“People have fewer houses to choose from, but we are selling more,” she said. “If you take a step back and look at the market as a whole, we have a robust, healthy market.”

Homes sales in the Richmond region

The following shows the number of sales and median prices in the first quarter and percentage changes from the same period in 2017:

In Richmond real estate, across town, buyers are paying more for houses than sellers are asking

Meg and Jonathan Hamilton’s new home on West 45th Street in Richmond had 53 showings and 11 offers in 36 hours.

Jonathan and Meg Hamilton liked the natural light and 1940s details in their home when they first saw it. They wrote a letter to the buyer, added an escalation clause and waived an inspection to buy the home.

Jonathan and Meg Hamilton bring a basket of items to leave in their new home for luck on Monday April 30, 2018. In 36 hours, the home had 53 showings and 11 offers.