Richmond-based CarLotz, a former startup that went from selling vehicles on consignment 11 years ago in Chesterfield County to a publicly traded company with national expansion plans, will merge with a California firm under an agreement announced Tuesday. The business has faced ongoing challenges recently. 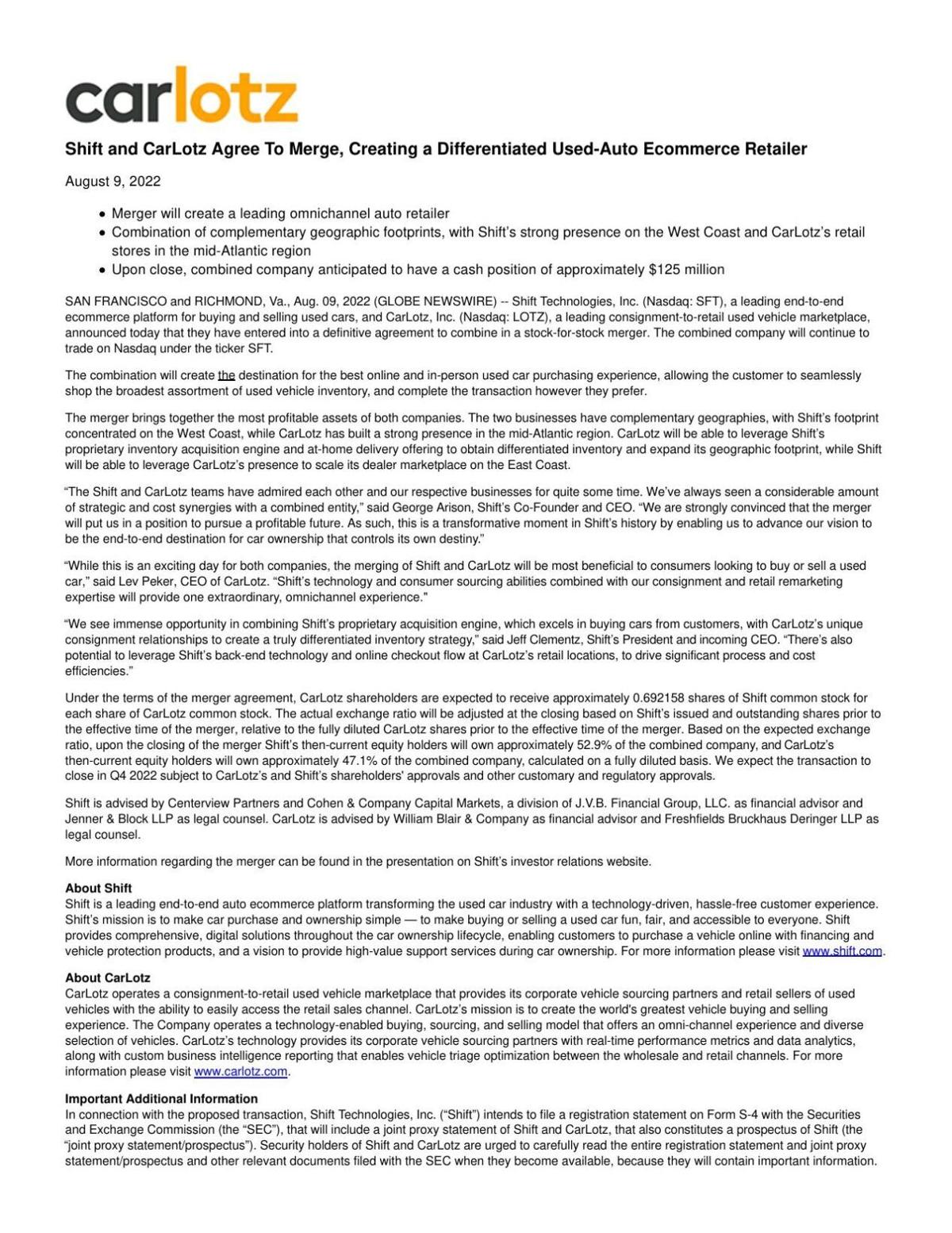 The deal is with used-vehicle retailer Shift Technologies, with the two entities combining in a stock-for-stock merger. The new company, to be headquartered in San Francisco, will trade on the Nasdaq as SFT.

“The Shift and CarLotz teams have admired each other and our respective businesses for quite some time. We’ve always seen a considerable amount of strategic and cost synergies with a combined entity,” said George Arison, Shift’s co-founder and CEO. “We are strongly convinced that the merger will put us in a position to pursue a profitable future.”

CarLotz opened its first store off Midlothian Turnpike in Chesterfield in 2011 using a business model of getting inventory from those wanting to sell a vehicle. The company would then handle the marketing of the vehicle and getting it inspected, cleaned and listed for sale for a flat fee.

“We want to offer the benefits of the for-sale-by-owner car market but without having to deal with all the hassles,” Michael W. Bor, founder and CEO, told The Times-Dispatch in 2019.

In announcing that 192 jobs would be created by the company moving into the Handcraft Building in Scott’s Addition in June 2021, then-Gov. Ralph Northam said: “CarLotz has experienced tremendous success since its founding in Richmond a decade ago, and we are excited to see this homegrown company deepen its roots in the Commonwealth.”

But in recent years, the company faced ongoing supply chain issues and skyrocketing used vehicle prices. Bor was replaced in March. Plans were announced in June to shutter 11 dealerships and cut up to 30% of the workforce “as part of a strategic review of the business, with cash preservation and future profitable growth as key determining factors.”

“We have not had time for the Shift and CarLotz teams to thoroughly evaluate the organizational structure of the combined entity,” she said.

Unlike CarLotz, which has many brick-and-mortar locations, Shift is largely an e-commerce retailer, acting as an online marketplace for buying and selling used vehicles. It was founded in 2014.

“The combined company will be headquartered in San Francisco. We will be evaluating our combined needs over the coming weeks and will provide updates regarding our presence in central Virginia beyond the hub level,” Griles said. 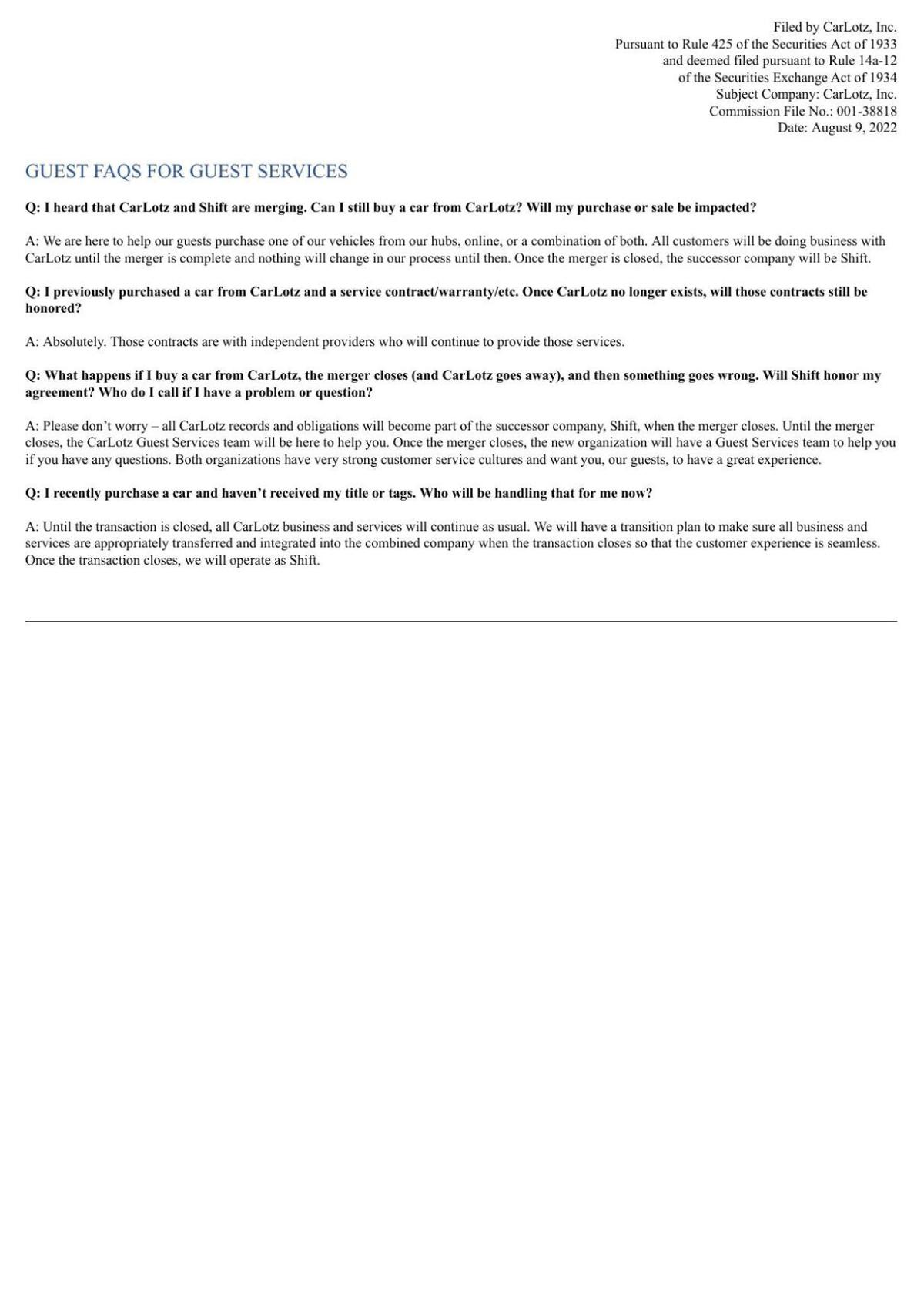 Arison will step down as CEO role on Sept. 1, but will continue as the Shift chairman. Shift President Jeff Clementz will become CEO.

In announcing the agreement, the companies said the new entity will have a cash position of about $125 million once the transaction closes in the fourth quarter.

CarLotz shareholders are expected to receive about 0.692158 shares of Shift common stock for each share of CarLotz common stock, the companies said.

Major crime has risen 28% so far this year in Richmond, with property crime driving the numbers

Reported violent crime rose from 522 offenses during the first six months of 2021 to 531 for the same period this year. By comparison, property crime surged from 3,119 offenses to 4,134, the chief reported.

A Times-Dispatch analysis of state crime data shows the number of murders and non-negligent manslaughter killings soared in 2020 to the highest level since 1994.