WATCH NOW: Amazon adds new programs to prevent workplace injuries as incidents are more common at its warehouses
0 Comments
Share this
1 of 9 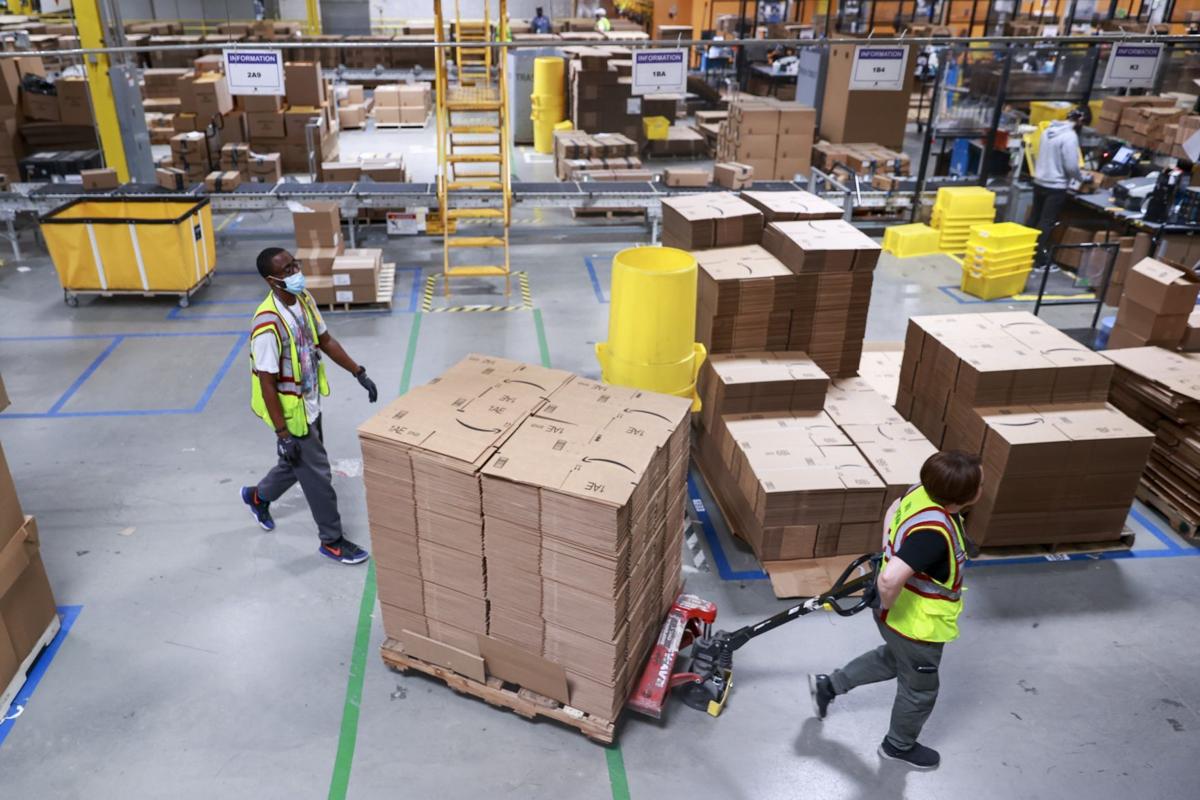 Amazon employees move boxes through the warehouse, which employs thousands and sends tens of thousands of orders to customers every day. 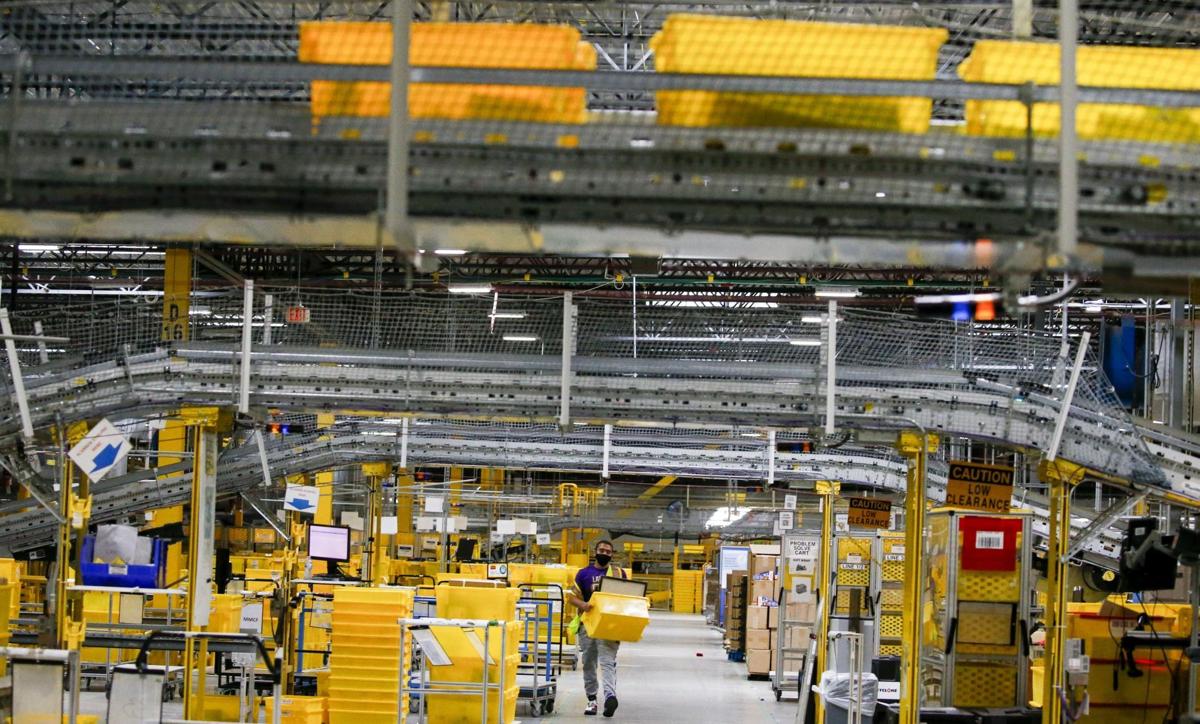 An Amazon employee makes their way through a fulfillment center on Tuesday, May 25, 2021 at an Amazon Fulfillment Center in Chesterfield County. 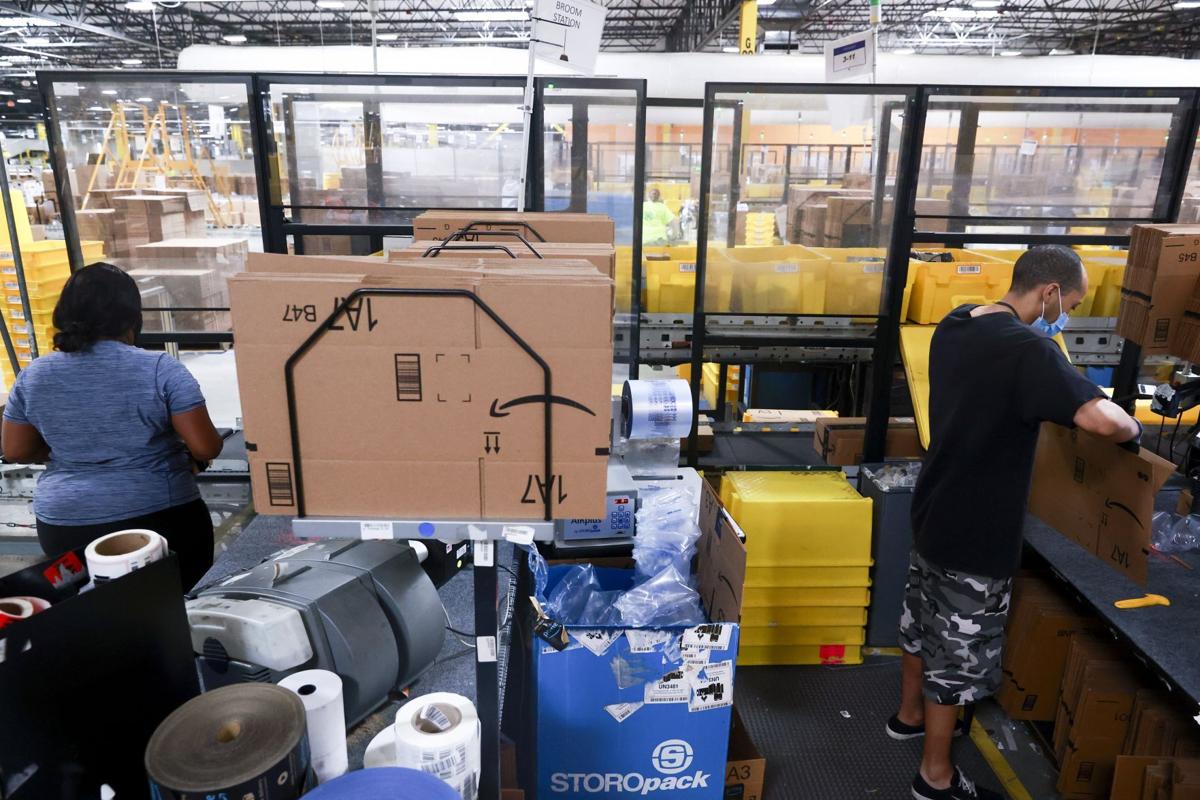 Briana Burke, left, and Sean Screwe, right, prepare packages on Tuesday, May 25, 2021 at an Amazon Fulfillment Center in Chesterfield County. 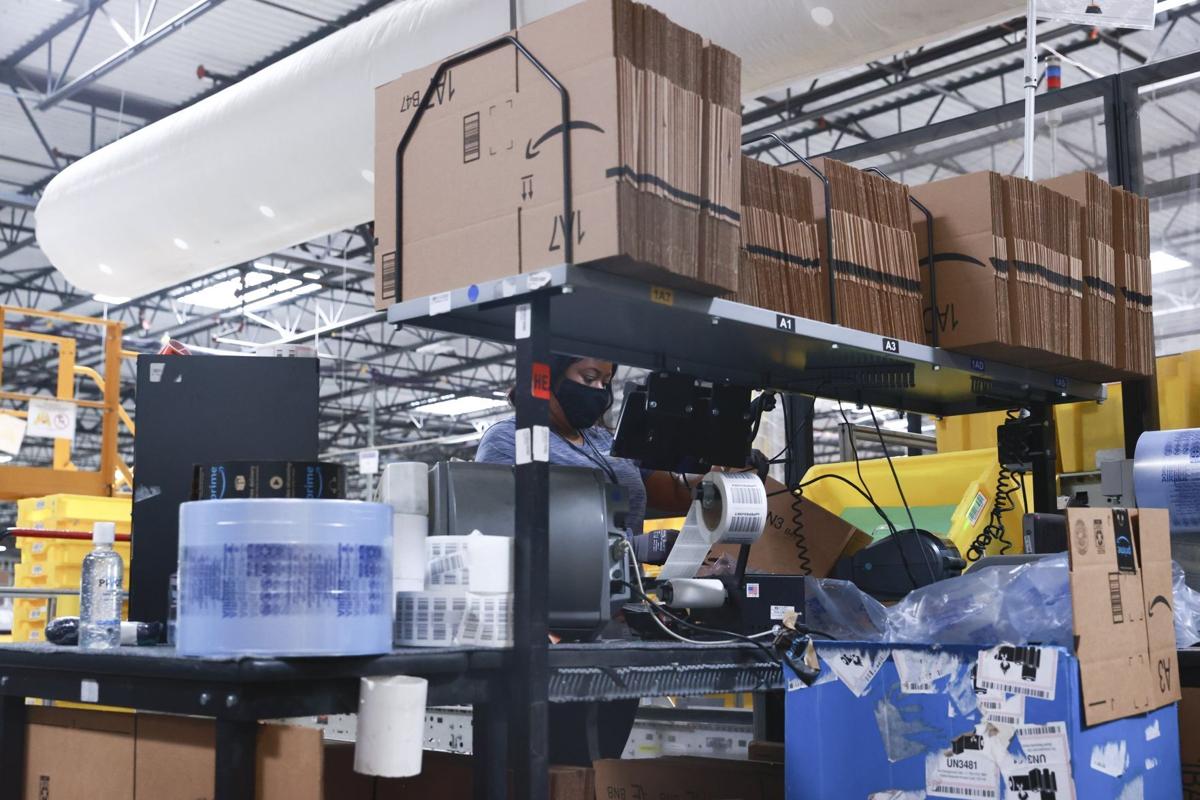 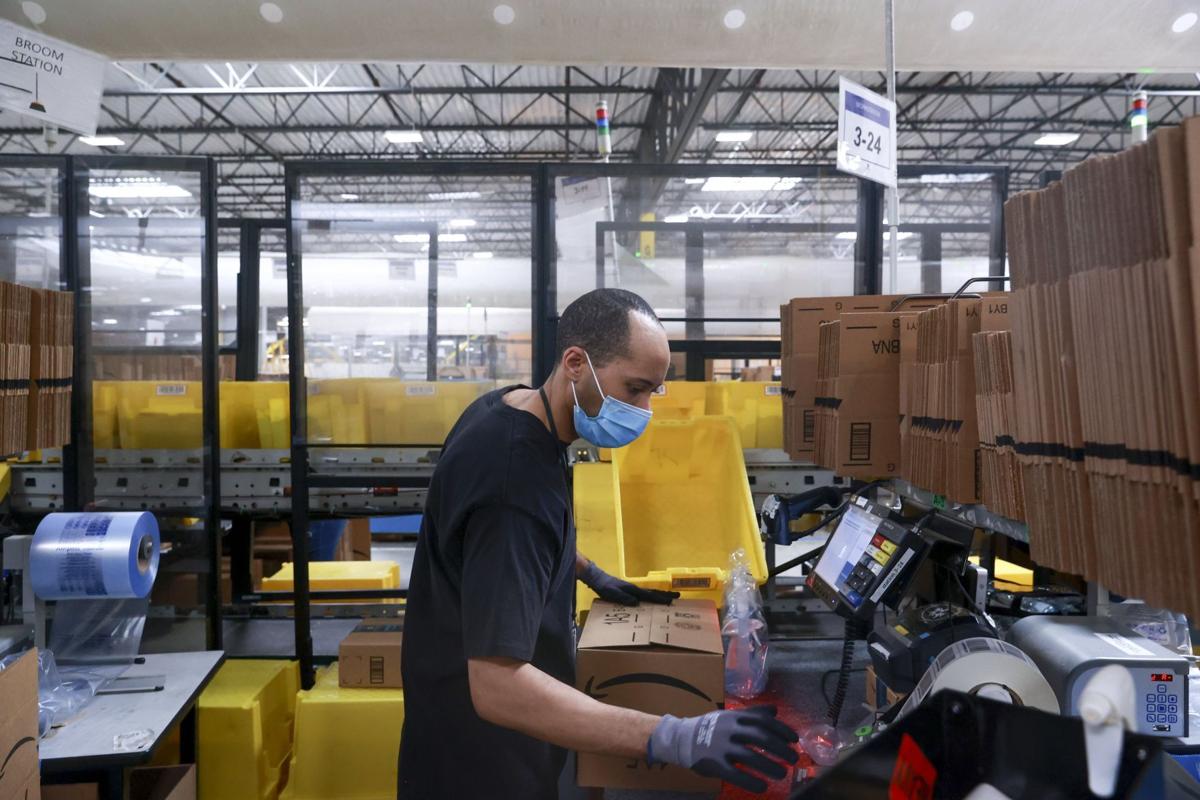 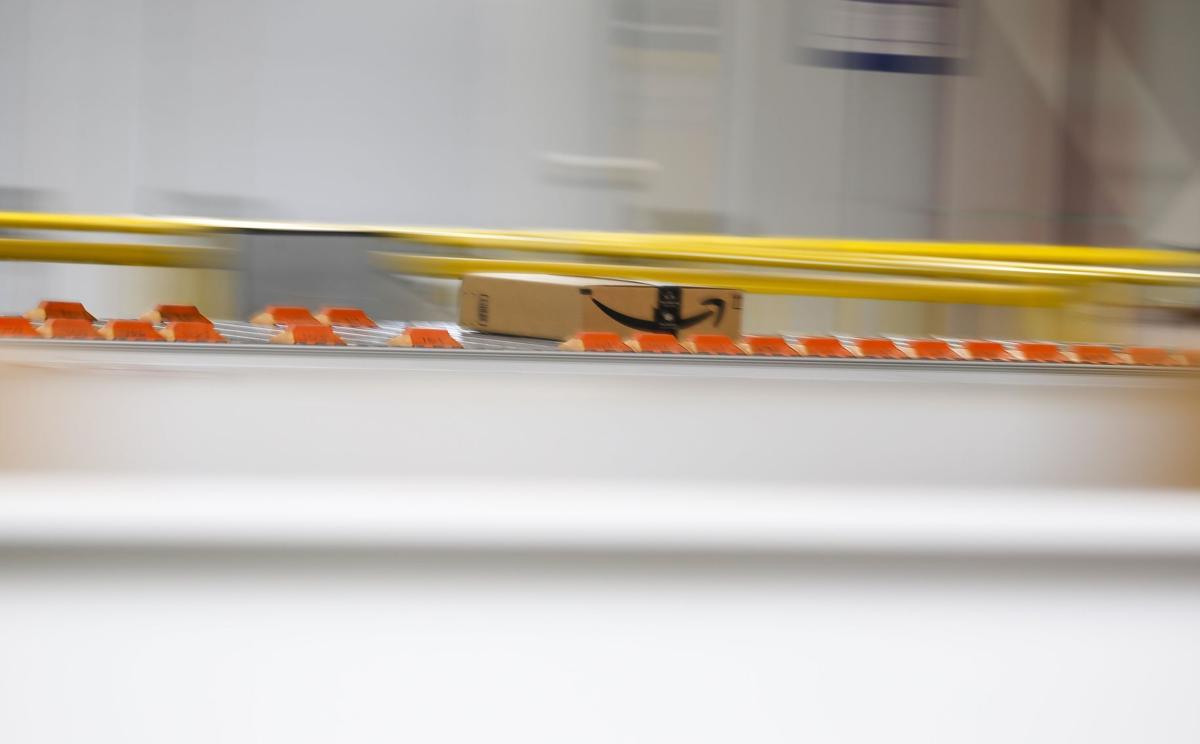 Packages make their way through on a belt system at the 1.2 million-square-foot fulfillment center. 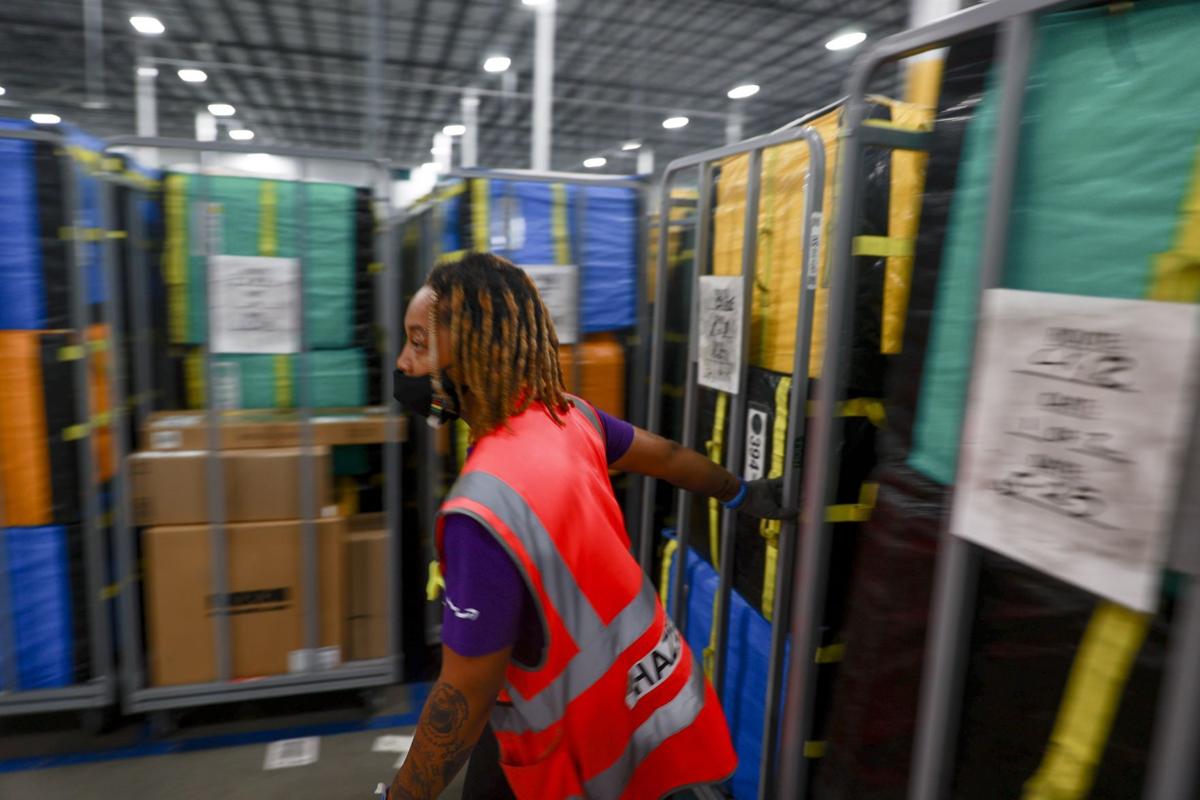 Dianshe "Hazel" Nelson moves packages take packages to their drivers to be delivered on Tuesday, May 25, 2021 at Amazon Delivery Station in Chesterfield County. 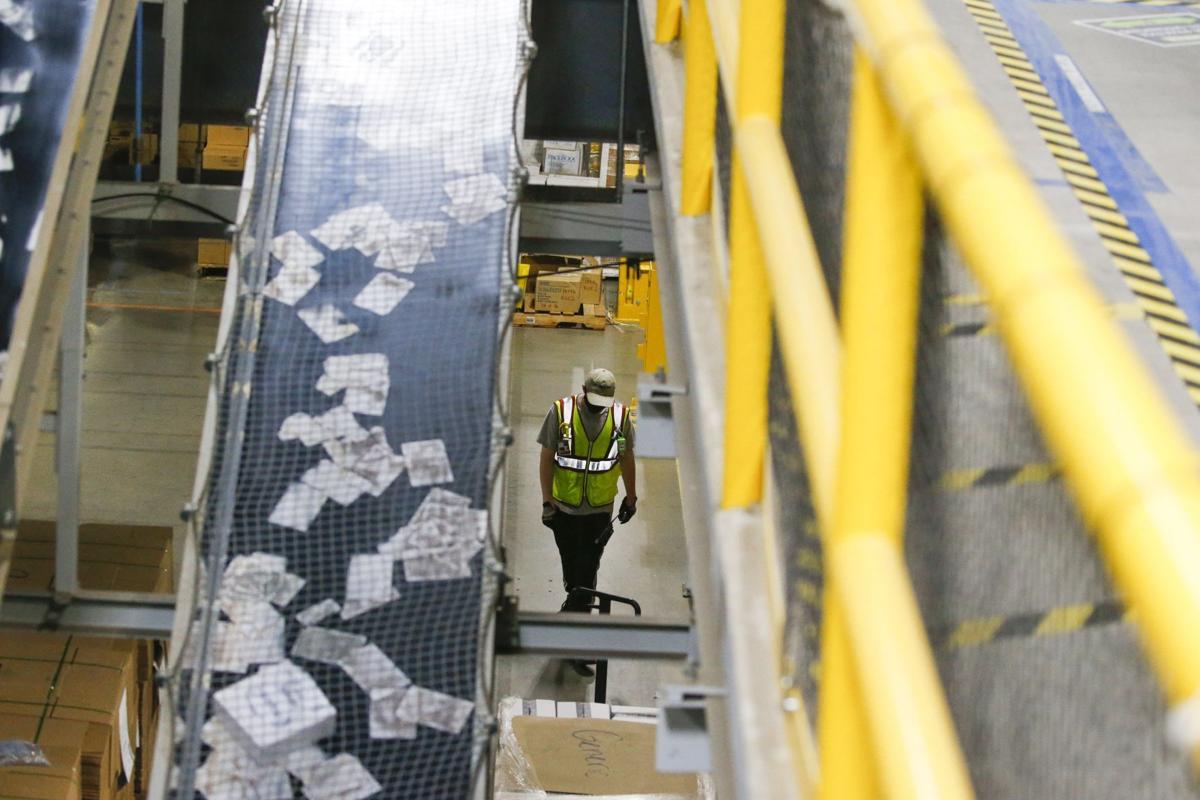 In May, Amazon announced it was hiring for 75,000 full- and part-time jobs companywide, vying for new hires in a job market already marked by labor shortages due to the pandemic. 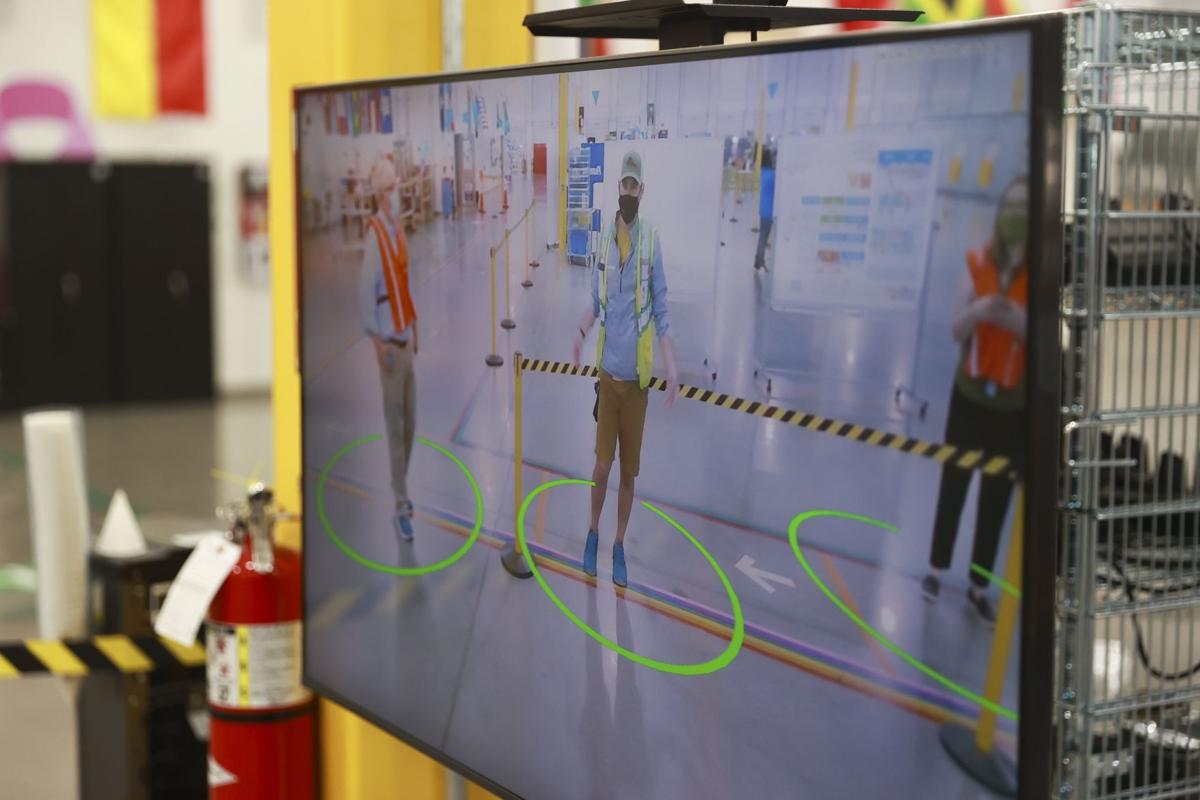 Jeff Bennett, a sub regional workplace health and safety manager, is seen on a screen as he demonstrates a monitoring system that helps employees maintain a proper safe distance on Tuesday, May 25, 2021 at Amazon Delivery Station in Chesterfield County.

Briana Burke, who has worked for online retail giant Amazon since 2013, has done almost every job available at the company’s gigantic fulfillment center in Chesterfield County.

The 1.2 million-square-foot warehouse, packaging and shipping center in the Meadowville Technology Park employs thousands of workers and sends tens of thousands of orders to Amazon customers every day.

Burke is now responsible for packaging those products into the brown Amazon boxes that are familiar to almost anyone who shops online these days.

All kinds of products that have been ordered by customers and selected by employees known as “pickers” from the center’s huge warehouse move in yellow tote boxes down conveyor belts to packing, and to Burke’s work station. She scans each item and a computer readout tells her exactly what type of brown box to place that item in, which she selects from stacks of boxes at her work station before sealing the box with tape dispensed from a machine.

Burke, a Chesterfield resident, said she loves working at Amazon. “The people are great, and the managers,” she said.

The job requires standing and moving constantly for hours at a time, the type of work that can be a source of physical strain for anyone working in a warehouse operation.

Burke, though, takes stretch breaks of just a few minutes, multiple times a day, as part of a new workplace program that Amazon has introduced called WorkingWell. The workplace program is designed to provide employees with physical and mental support and to help reduce workplace injuries.

These “Mind and Body Moments,” as Amazon calls them, are designed to reduce muscle and mental fatigue and range from various stretches to breathing exercises and mental reflections. A prompt appears on Burke’s screen guiding her through the exercises, which she does at her work station.

“It definitely gives you a break rather than just going and going until break time,” Burke said. “It gives you time to stop and think about physical and mental health.”

The new program comes as Amazon has faced years of criticism over what some critics say are grueling and unsafe work conditions at its facilities, as the company pushes to get packages delivered to its customers at a faster rate.

A recent analysis by The Washington Post of new work-related injury data from the federal Occupational Safety and Health Administration showed that jobs at Amazon can be more dangerous than at comparable warehouses.

Since 2017, Amazon reported a higher rate of serious injury incidents that caused employees to miss work or to be shifted to light-duty tasks than at other warehouse operators in retail, according to the Post’s analysis using the OSHA data.

In 2020, for every 200,000 hours worked at an Amazon warehouse in the U.S. — the equivalent of 100 employees working full time for a year — there were 5.9 serious incidents, according to the newspaper’s analysis.

That’s nearly double the rate of non-Amazon warehouses. In comparison, Walmart, the largest private U.S. employer and one of Amazon’s competitors, reported 2.5 serious cases per 100 workers at its facilities in 2020.

Critics have said unrealistic productivity goals are to blame for the higher incidents, but Amazon says those criticisms are inaccurate.

However, after employees at an Amazon warehouse in Bessemer, Ala., voted in April to reject becoming a union shop, the company’s founder and CEO Jeff Bezos said in a letter to shareholders that he took no comfort in that outcome.

“I think we need to do a better job for our employees,” Bezos said. “While the voting results were lopsided and our direct relationship with employees is strong, it’s clear to me that we need a better vision for how we create value for employees — a vision for their success.”

After conducting a pilot program on WorkingWell in 2019, Amazon says it now has introduced the program at 350 of the company’s sites in North America and Europe as a way to prevent workplace injuries, particularly musculoskeletal or “MSD” injuries that are common in warehousing and distribution settings and comprise about 40% of injuries at Amazon locations.

“MSDs are common in the type of work that we do and are more likely to occur during an employee’s first six months,” said Amazon spokesperson Courtney Johnson. “We knew we had to invent a solution to reduce MSDs” so the company now has about 6,200 safety professionals out of a workforce now pushing 1 million people in the U.S.

The new program also comes as Amazon is adding to its operations in the Richmond region and elsewhere in Virginia, vying for new hires in a job market already marked by labor shortages due to the COVID-19 pandemic.

In May, Amazon announced it was hiring for 75,000 full- and part-time jobs across the company. That includes about 1,200 jobs in central Virginia, which have an average starting pay of about $17 per hour.

Besides the short breaks at work stations, the WorkingWell program also includes regularly scheduled meetings where employees gather in small groups to watch videos and practice movements to prevent injuries.

At one such meeting recently at the company’s Chesterfield fulfillment center, about a half-dozen employees gathered in a central area not far from their work stations to practice how to lift items properly to prevent back injuries.

Amazon says it spent about $300 million last year on safety programs and that the WorkingWell program so far has helped to reduce musculoskeletal injuries by about 32%.

Besides being good public relations, the program could help reduce the company’s insurance costs, said Etti Baranoff, an associate professor of insurance and finance at Virginia Commonwealth University and a former state insurance regulator in Texas.

“Many employers end up in high-risk [insurance] pools and it costs them a lot of money,” Baranoff said.

For a company that is growing as fast as Amazon, “maybe this is a part of the growing up and maturing,” she said. “They really have to create all the safety elements to make sure they are in line with the industry frequency and severity” of injuries.

A focus on wellness and safety also can be helpful in recruiting.

“You want to work in a place where you know that tomorrow you are not getting sick or injured,” Baranoff said.

Amazon, as part of WorkingWell’s mental health initiative, is adding AmaZen meditation booths at some of its sites.

It consists of kiosks at work sites where employees can watch short, interactive videos aimed at psychological well-being including guided meditations and calming scenes.

While the kiosks are expected to arrive later this year, Amazon’s delivery station at 1601 Bellwood Road in Chesterfield, which opened in May 2020, does have wellness and meditation areas where employees can go for a few minutes of quiet or to do stretching.

That delivery center is where packages arrive to be loaded onto Amazon delivery vans.

Several times a day or more, a wave of vans arrives at the delivery station and is directed by a yard marshal down several runway-like lanes inside the building. The facility’s employees then load the vans with hundreds of carts full of packages for delivery to customers.

Signs around the work areas remind employees to check the weight on large packages or get help if a package is heavy.

Much of the emphasis in the WorkingWell program is about “being ergonomically efficient and working smarter, not harder,” said Jeff Bennett, a subregional safety manager for three Amazon facilities in Virginia.

“We have received about 90% positive feedback that employees like WorkingWell,” Bennett said.

Employees such as Safiyyah Muhammad, a Chester resident who sorts packages at the delivery station, serve on an associates safety committee that makes recommendations to management.

“Pretty much I am their eyes and ears,” she said. “I focus on addressing safety issues and trying to execute it by letting leadership know about any unsafe conditions, and I will talk with my peers about safety, to reduce any issues.”

Businesses and other employers in Virginia have been continuing to add jobs in Virginia as the COVID-19 pandemic recedes, but the rate of job …

'The war for talent is on:' With an increase in open jobs, Richmond area employers scramble to fill open positions

Atlantic Union Bank is hiring differently since the pandemic. They’re moving faster, out of necessity.

WATCH NOW: 'It's a difficult time to be building a home': Construction market faces supply strains, rising prices, but demand is still holding on

The impact on the construction industry from the COVID-19 pandemic is likely to linger for some time.

One in 4 workers plans to look for a job with a new employer once the pandemic is over. And more than 40% of the global workforce is considering leaving their employer this year.

Amazon employees move boxes through the warehouse, which employs thousands and sends tens of thousands of orders to customers every day.

An Amazon employee makes their way through a fulfillment center on Tuesday, May 25, 2021 at an Amazon Fulfillment Center in Chesterfield County.

Briana Burke, left, and Sean Screwe, right, prepare packages on Tuesday, May 25, 2021 at an Amazon Fulfillment Center in Chesterfield County.

Packages make their way through on a belt system at the 1.2 million-square-foot fulfillment center.

Dianshe "Hazel" Nelson moves packages take packages to their drivers to be delivered on Tuesday, May 25, 2021 at Amazon Delivery Station in Chesterfield County.

In May, Amazon announced it was hiring for 75,000 full- and part-time jobs companywide, vying for new hires in a job market already marked by labor shortages due to the pandemic.

Jeff Bennett, a sub regional workplace health and safety manager, is seen on a screen as he demonstrates a monitoring system that helps employees maintain a proper safe distance on Tuesday, May 25, 2021 at Amazon Delivery Station in Chesterfield County. 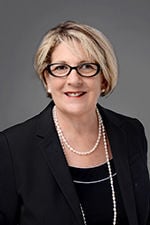