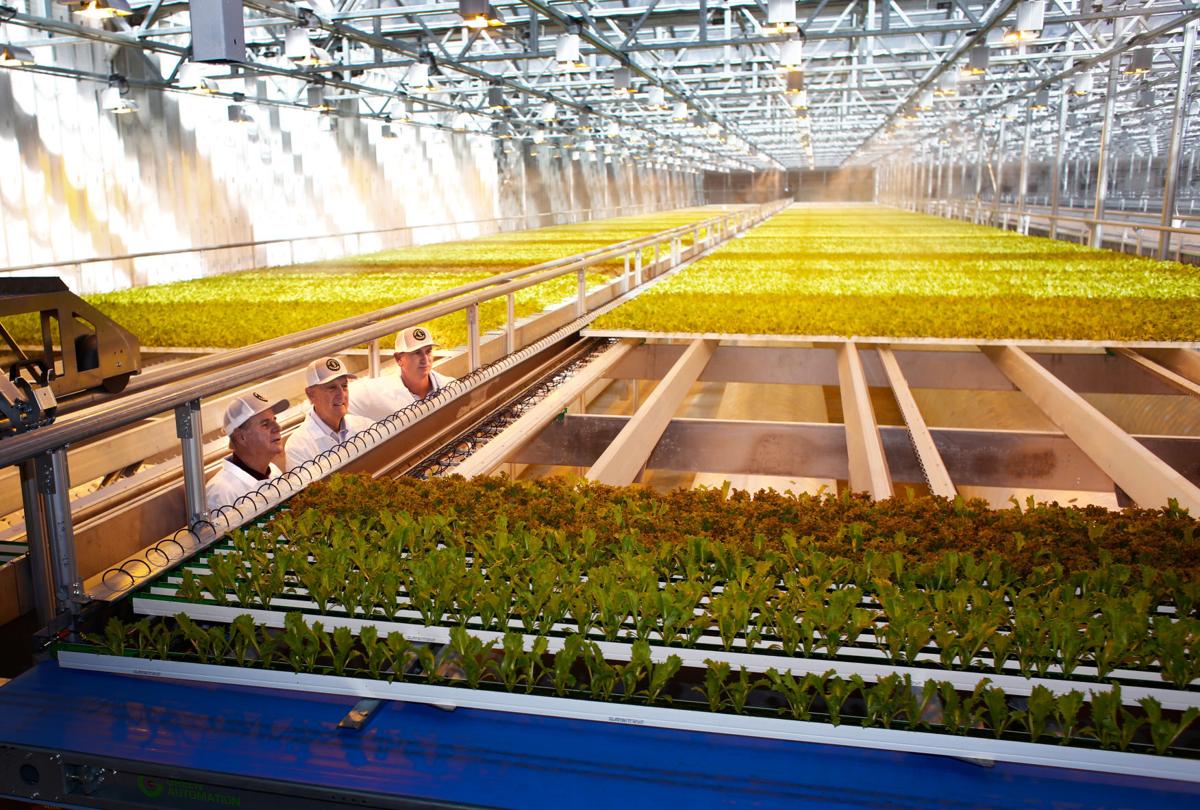 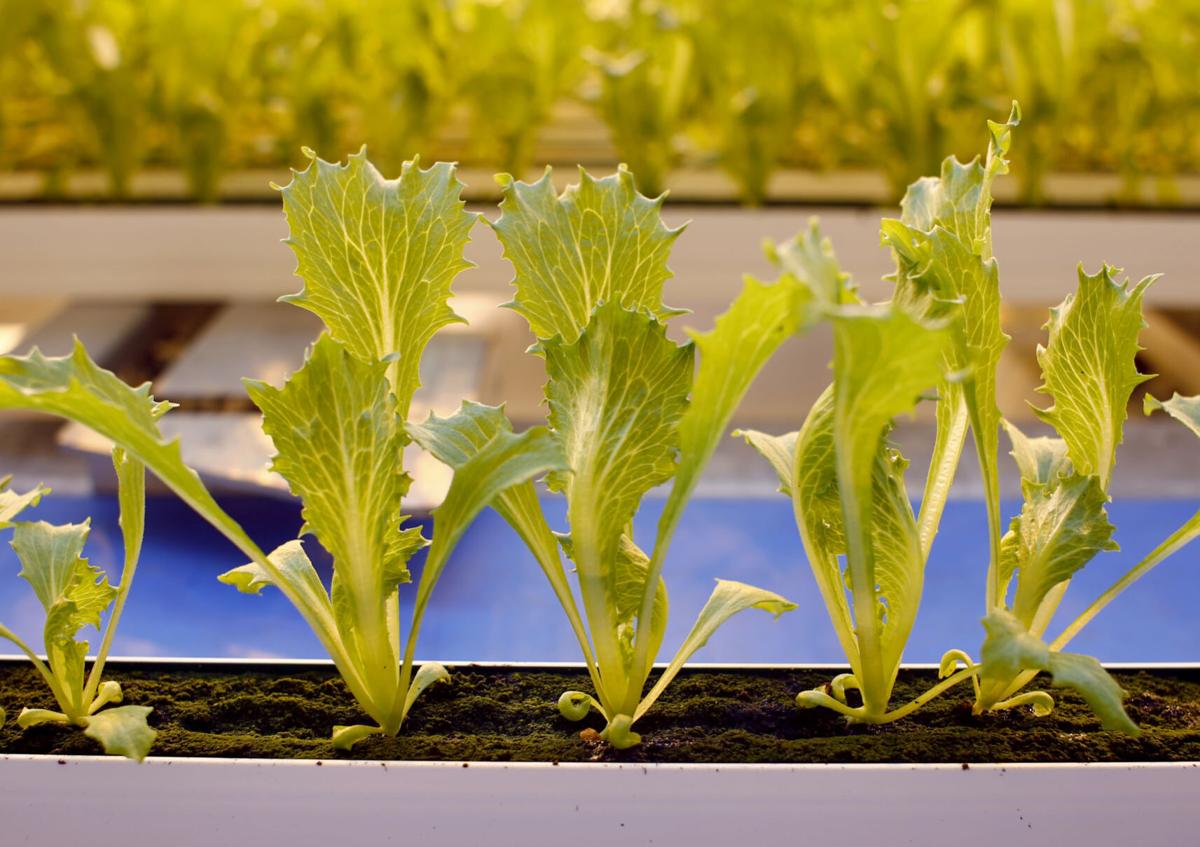 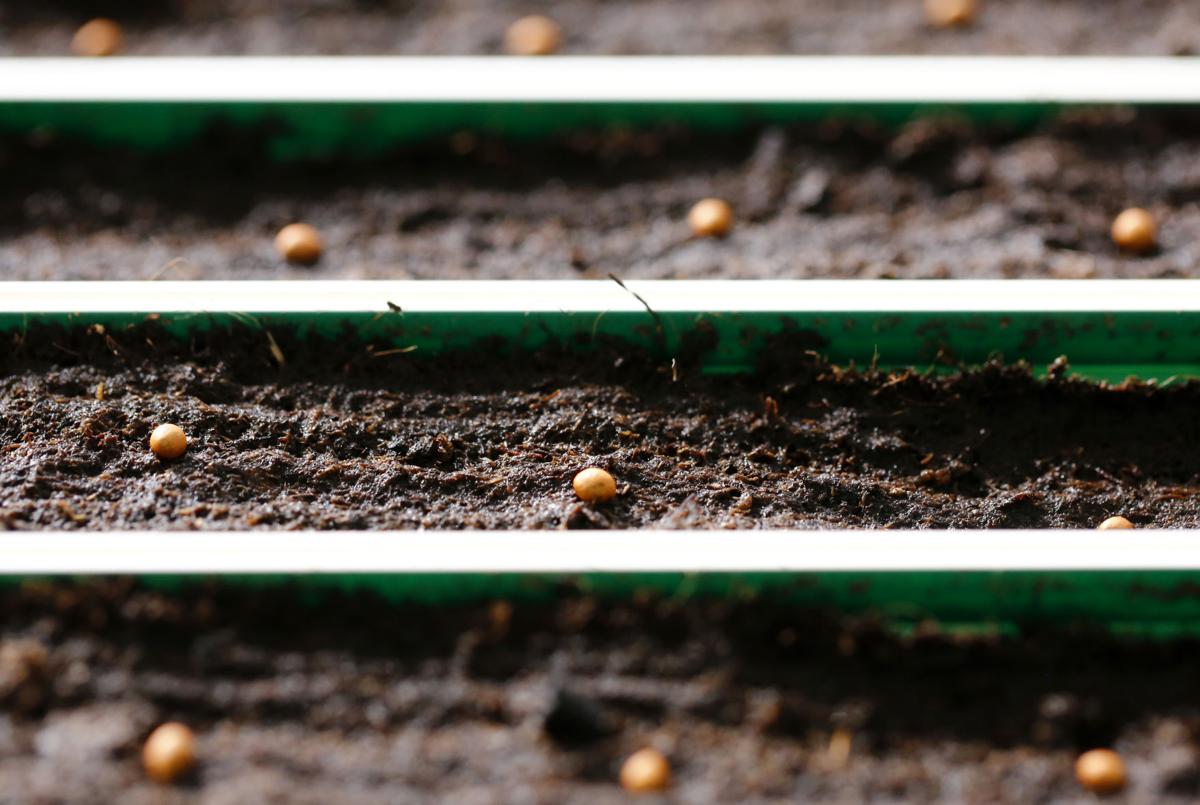 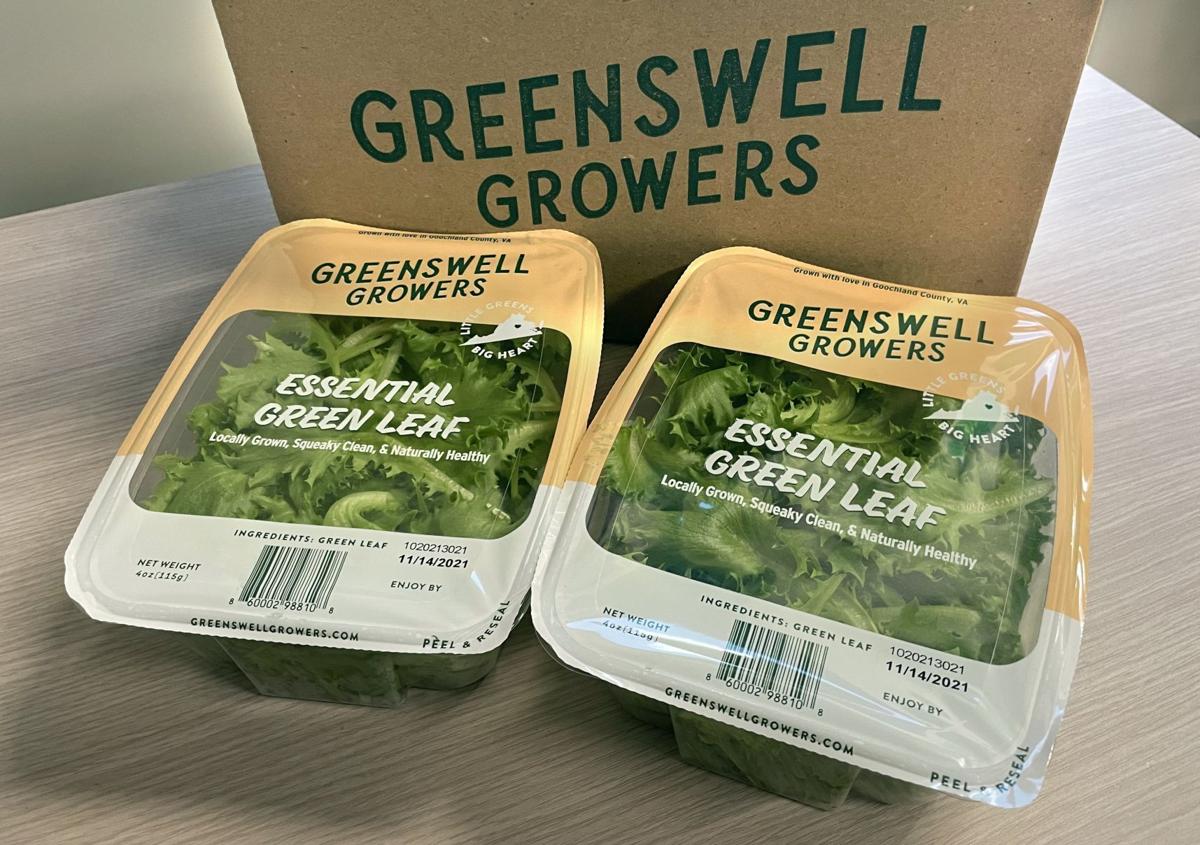 Greenswell Growers plans to sell its greens at retail stores and supply 5% to food banks in central Virginia. 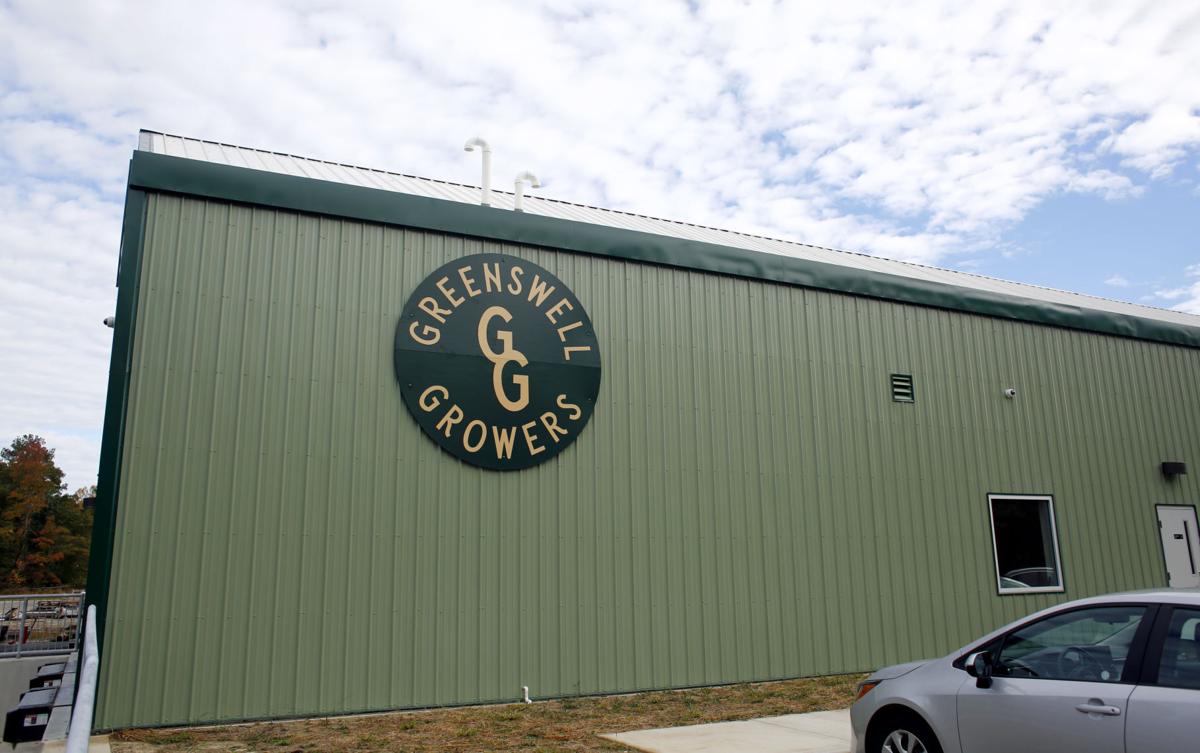 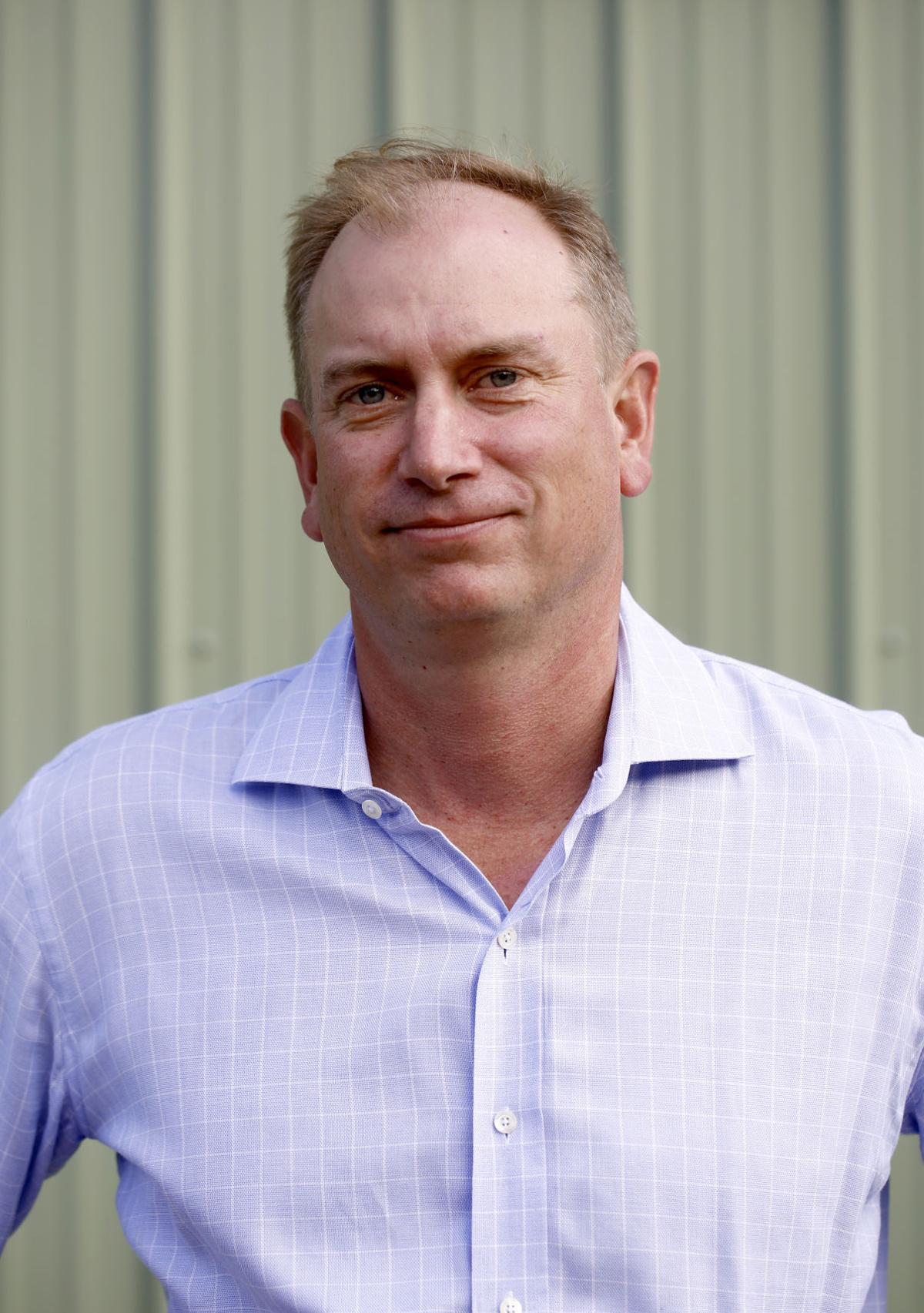 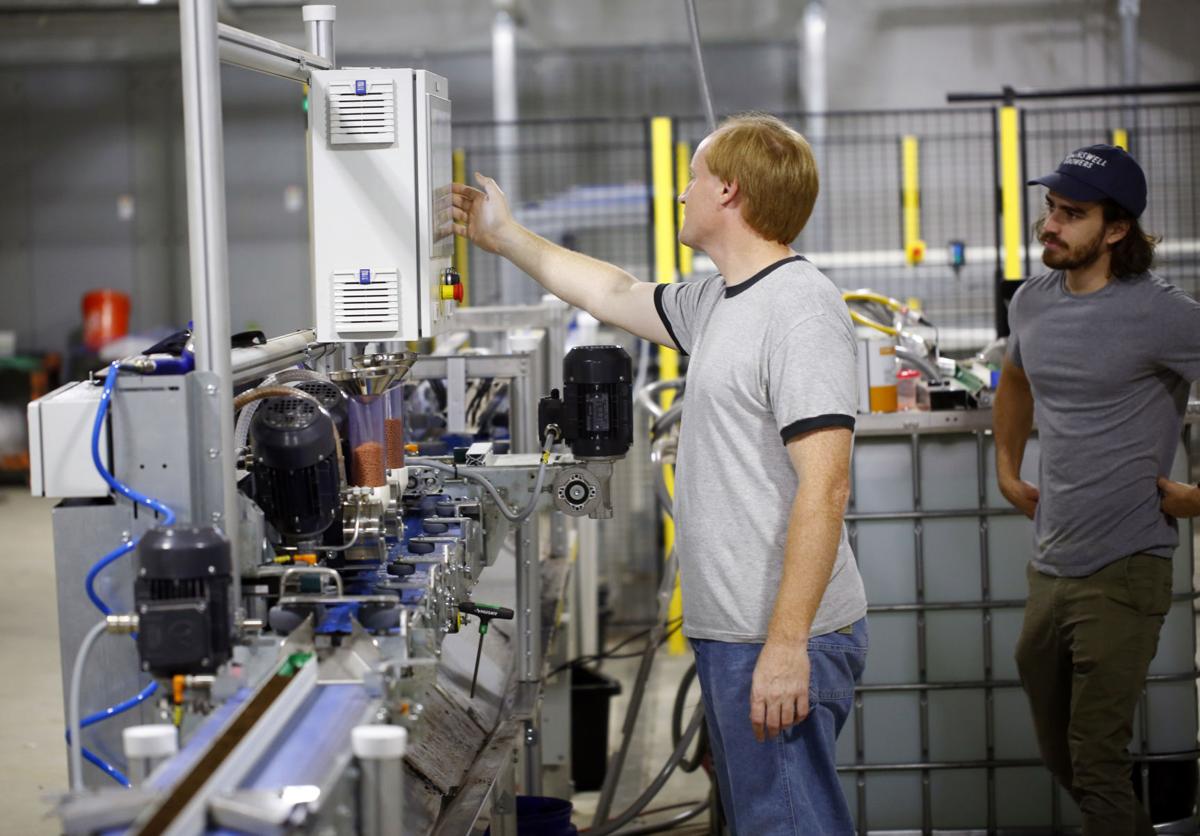 Millions of leafy green plants now growing in a greenhouse in Goochland County have their roots in an idea that was planted almost five years ago.

The co-founders of Greenswell Growers, which is producing edible greens at a large indoor farm facility in the West Creek office park in Goochland, initially came together out of a desire to provide more fresh, nutritious produce for food-insecure people in the Richmond area.

The founders of Greenswell are Charles “Chuck” Metzgar, a former managing director for the human resources consulting firm Mercer; Doug Pick, the president and CEO of Feed More, the hunger relief agency that operates Virginia’s largest food bank; and John May, a retired technology industry professional and president and CEO of the Center for Innovation and Development in Kilmarnock.

“We were going to go to farmers in the state of Virginia — field growers — to find the product,” Metzgar said. “We looked for almost a year’s period of time.’”

However, they were unable to find enough produce to supply Feed More’s needs.

“The reason was that today’s farmers don’t do enough produce in the state of Virginia other than in small quantities for farmer’s markets or a mom-and-pop grocery store here and there,” Metzgar said. “The key issue is there isn’t enough labor. Nobody wants to go and put their hands in the dirt.”

“We looked at each other and said, ‘What do we do now?’” Metzgar said, “Then we saw a couple of hydroponic facilities and the lightbulbs went on.”

May, a retiree whose career included starting a telecommunications infrastructure company in Northern Virginia, came on board with Greenswell Growers after hearing Metzgar make a presentation in the Northern Neck about hydroponic farming.

“I’m really the geek of the outfit,” May said.

“I thought it made a whole lot of sense,” May said of the hydroponic farming idea. “I looked at the numbers, and put together a financial model, and got some investments.”

After pulling together a small group of investors, Greenswell Growers recently opened a $17 million indoor farming operation that not only will supply local food banks, but is also pursuing a budding business model of supplying grocery stores with fresh greens.

The company has not announced yet where its greens will be sold, but Metzgar said it is in discussions with six grocery chains. He declined to say which chains, but said the retailers are names people would recognize.

The founders of Greenswell Growers do not foresee their company competing with Virginia farmers. Instead, they want to supply an alternative source of green produce versus the large-scale, outdoor farming operations found in California and Arizona that produce more than 90% of the leafy greens that consumers buy in the United States.

May calls that model “scary,” especially now that the COVID-19 pandemic has exposed how fragile supply chains can be.

“Our food is coming from thousands of miles away,” he said. “If the supply chain breaks down at any point, then we are in trouble. For me, this is a risk thing.”

The greenhouse currently has 1.5 acres of growing space, with plans to eventually triple that size. The operation is highly automated to save energy and time.

The greenhouse is off Hockett Road, not far from the Capital One Financial Inc. campus and CarMax Inc.’s corporate offices in the West Creek office park.

Seeds are planted in growing trays using an automated planting line and then are moved into the greenhouse in long rows. They sprout and grow over a 21-day growing period while slowly moving through the greenhouse and receiving natural or indoor light and precisely controlled amounts of water, much of which is rainwater collected at the site.

“We actually create the weather in the building, other than mother nature with the natural sunlight that comes into the room,” Metzgar said. “That is why the industry is called controlled environmental agriculture. We can be a predictable supplier to retailers. They can tell us what they want, and we can seed it and then harvest it on the exact day they want it.”

Greenswell also brought on board Carl Gupton, who serves as president of the company and has a background in management for packaging companies such as Commonwealth Packaging Corp., 3C Packaging and Pohlig Packaging.

“I have done a lot of food packaging,” Gupton said. “I could see the stress that my food processing customers were under, getting raw materials. COVID has exacerbated the whole thing.”

At Greenswell, “we can offer retailers predictable supply right now,” Gupton said. “I can tell you 21 days out what our expected yield is going to be.”

Greenswell’s goal is to provide fresh produce that uses water more efficiently and that can get a higher yield per acre of space when compared to conventional farming operations.

The current Greenswell operation can produce about 500,000 pounds of greens a year, compared with about 22,000 per acre for a conventional growing operation.

“That is the capacity that this place has because of its automation,” Metzgar said. “And we don’t have any deer or raccoons” that will eat the crops.

The company has started by growing three kinds of leafy green products that would typically be used in salads or other dishes — a green leaf; a green and red leaf blend; and a green kale and dark leaf product.

“We are doing that on purpose, because it makes it much more simple for everybody,” Metzgar said. “We did a tremendous amount of research with consumers to see what they care about. What they care about is the quality of the plant.”

“We can tell a consumer or retailer down to the day when we harvest that product,” he said.

Even with its large per acre production volume, Greenswell still will only supply a small fraction of the volume of leafy green that consumers buy in Virginia.

Robb Hinton, a farmer in Northumberland County who serves on the Greenswell Growers board of directors, doesn’t foresee the hydroponic farming system replacing conventional agriculture, but he does see it as a “piece of the puzzle” for the future of agriculture.

“Every farmer dreams of perfection,” said Hinton, who raises corn, soybeans, wheat and barley on a 1,400-acre farm. “This system has the ability to achieve perfection in producing really healthy, high-quality food.”

“Being in an outside environment is tough,” he said. “You can get a really wonderful crop right up to the finish line and then lose it in a heartbeat.”

About 5% of the greens grown by Greenswell will go to Feed More for its food banks, which serve up to 20,000 meals a week. Pick said Feed More will use the fresh greens in its kitchens as well as to supply its clients with fresh greens they can take home.

“That makes a big difference” for health and nutrition, Pick said.

The switch to a hybrid work model during the COVID-19 pandemic has gone more smoothly than expected for HDAdvisors, a Richmond-based firm that…

Virginians can now file new applications for unemployment assistance or update their continuing claims after 10 days of not being able to so.

Expect to pay more for this year’s Thanksgiving meal compared with 2020.

Greenswell Growers plans to sell its greens at retail stores and supply 5% to food banks in central Virginia.