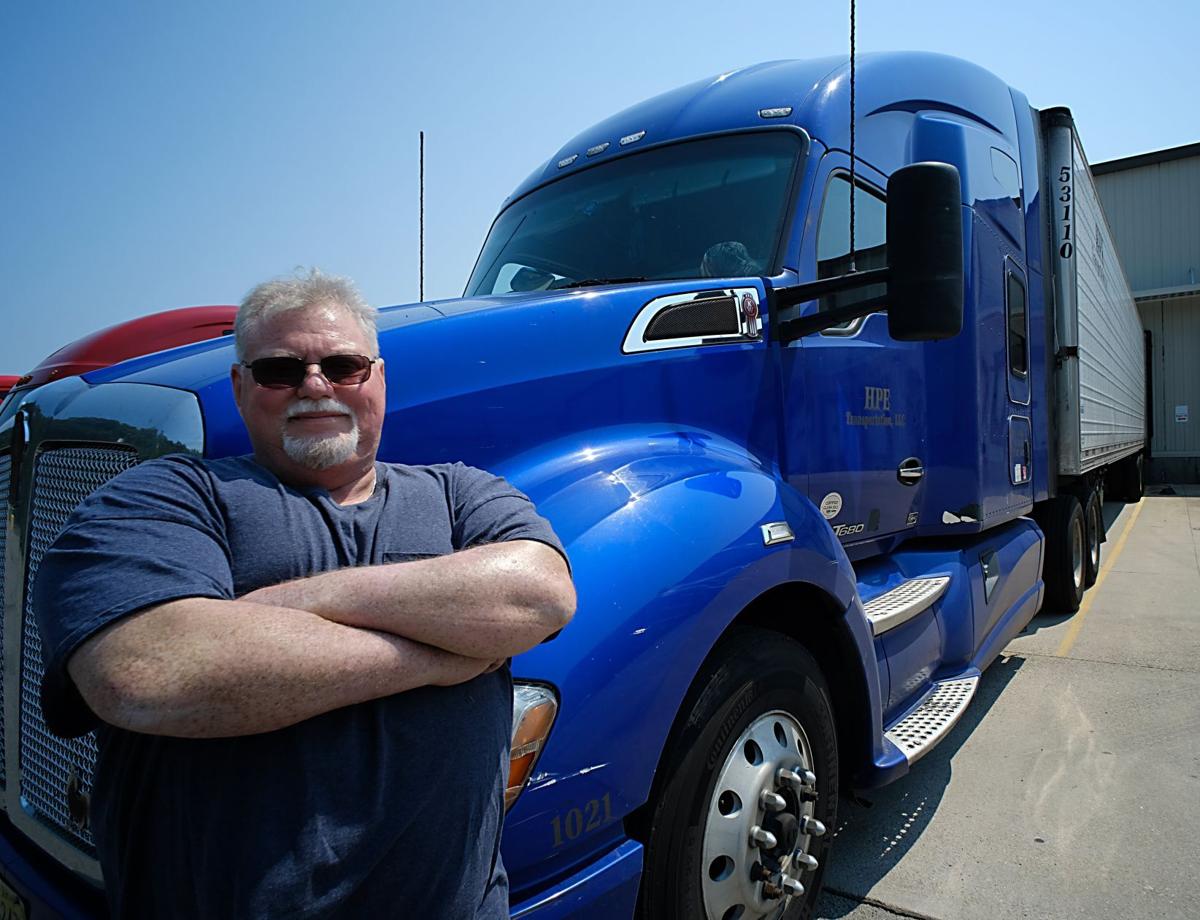 James Sayles, 51, of Powhatan County stands by his truck in Sandston as he prepares to travel to New Jersey for a delivery. When Sayles lost his job during the pandemic, he used Virginia Ready Initiative and state grants to help pay for courses to become a truck driver. 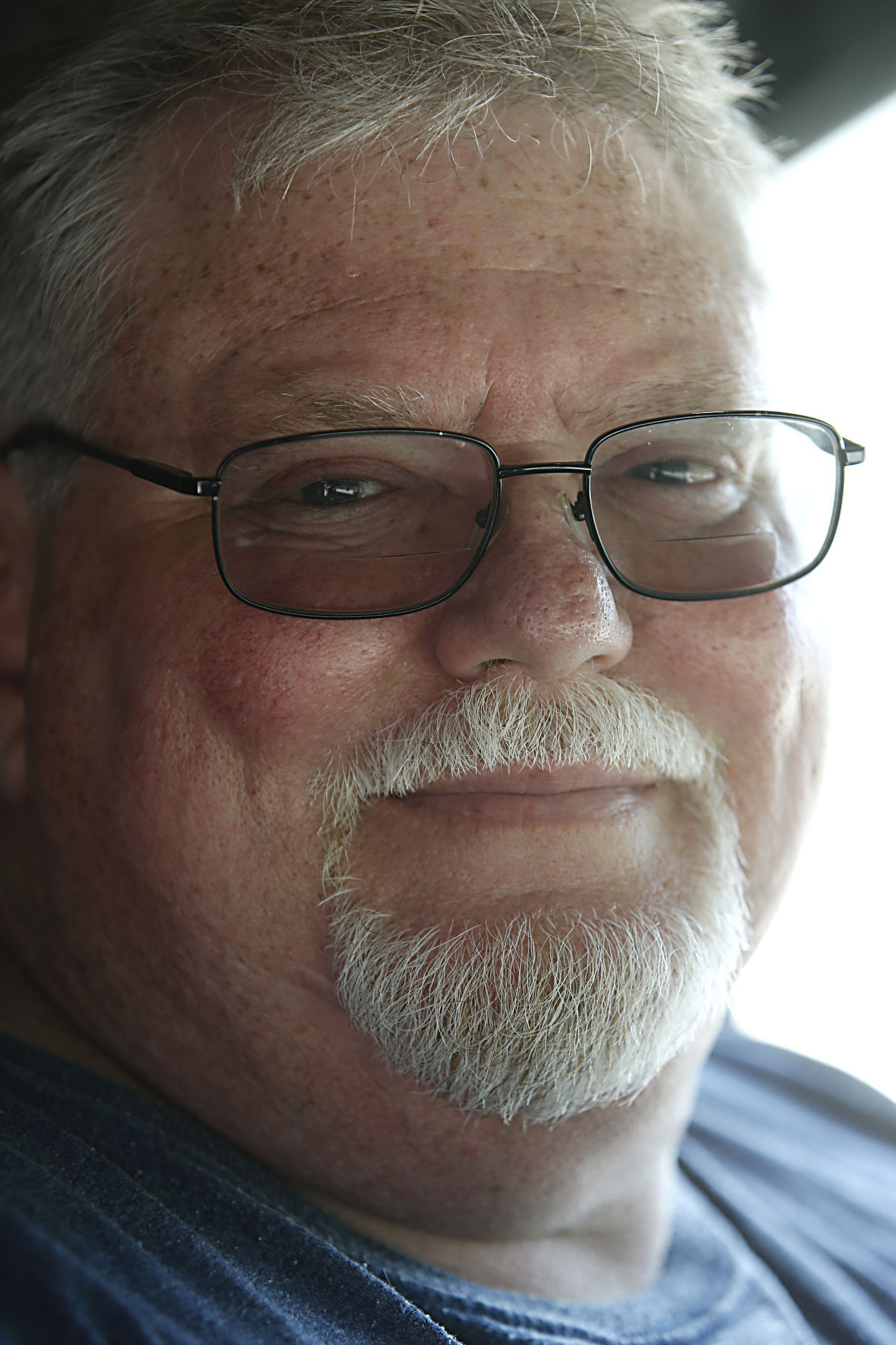 James Sayles, 51, sits inside his truck in Sandston, VA Tuesday, July 6, 2021 as he prepares to head out to New Jersey for a delivery. Sayles was an electrician since 1988, but lost his job during the pandemic and became a truck driver, what he says is his "dream job". 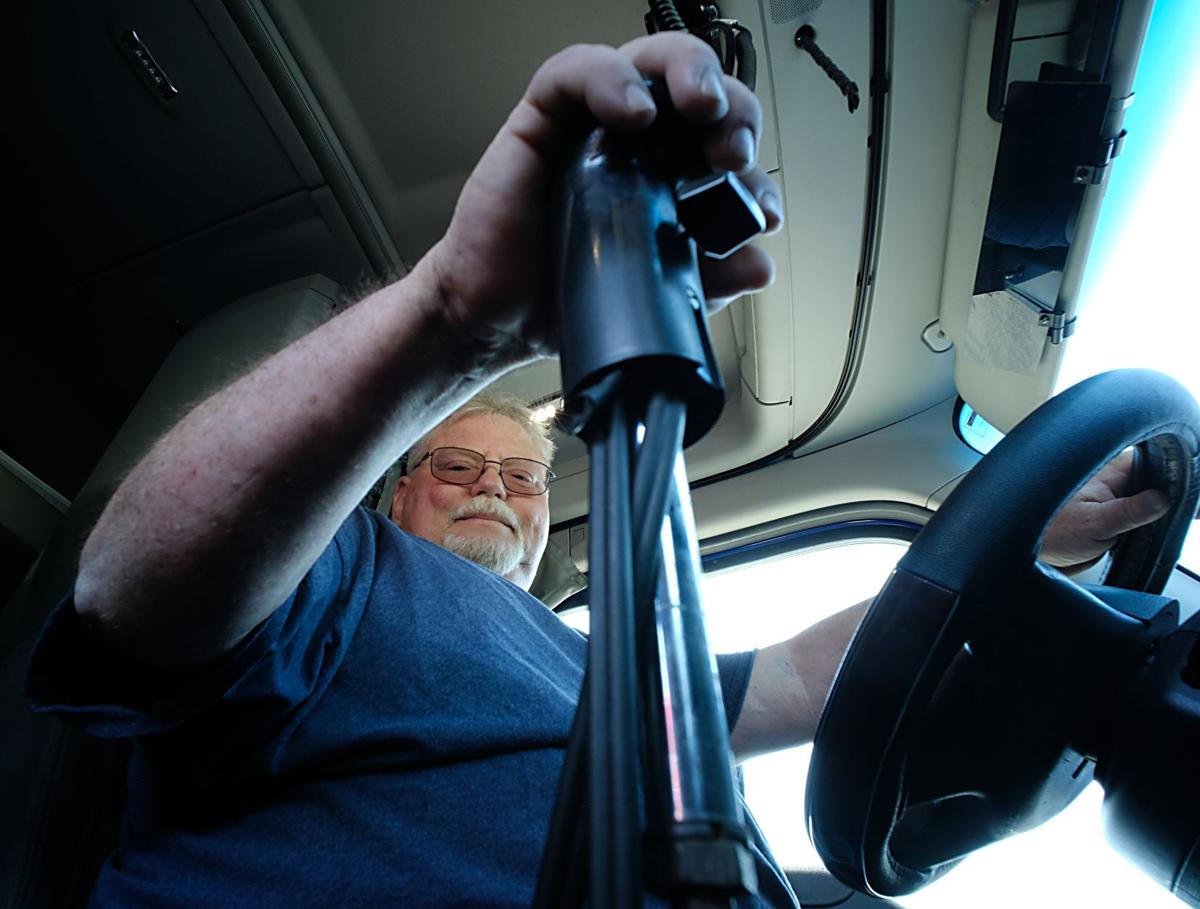 James Sayles, 51, sits in his truck in Sandston, VA Tuesday, July 6, 2021 as he prepares to head out to New Jersey for a delivery. Sayles was an electrician since 1988, but lost his job during the pandemic and became a truck driver, what he says is his "dream job".

At the beginning of the pandemic, Derek Salerno, 37, was exhausted and burned out.

He’d spent the past 20 years working in restaurants, managing the bar program at Richmond favorites like The Hard Shell and Buckhead’s, as well as creating the beverage concepts at Peter Chang’s Scott’s Addition and ZZQ.

Working in restaurants had always been hard, with unpredictable hours, pay and benefits. But everything got worse in 2019 when he tried to launch a new restaurant — Scuffletown — and it failed.

“Every day was a fresh, terrifying nightmare,” Salerno said. “It was killing me.”

The restaurant closed after five months, and Salerno was devastated. Everything he’d dreamed and worked for was gone. But he had a family to help support: a wife, a toddler and another baby on the way.

He landed a job as a bar manager at Julep’s, but after a few months, the pandemic shut down the restaurant and Salerno was out of a job.

Salerno was one of the 428,000 Virginians forced out of work at the height of the pandemic. Like many, he found himself with the gift of time. Time to step back and ask, was this really what he wanted to do for the rest of his life?

The answer was no: No, it was not.

The pandemic is changing the way that people approach work.

Between January and April 2020, U.S. employment fell by 21.9 million jobs, or 14.4%, eliminating nearly all the jobs created during the past 10 years. But now, after a year and a half of shrinking employment and one of the most significant global recessions in history, the U.S. economy is making a comeback.

According to a March 2021 survey from Prudential Financial — Pulse of the American Worker — 1 in 4 workers plans to look for a job with a new employer once the pandemic is over. And more than 40% of the global workforce is considering leaving their employer this year, according to Microsoft’s Work Trend Index, a global survey of over 30,000 people in 31 countries.

After 20 years in the Richmond restaurant industry, Salerno decided to switch careers.

“I’d always been interested in information technology,” he said.

While unemployed, he spent the majority of the pandemic chasing his toddler around and working on completing his certifications to become a network engineer. In May, he landed a job a with the city.

Now, he’s home every night for dinner and bedtime.

“I actually get to be a partner to my wife,” he said. He helps with bath time and gets to read his kids stories before bed. In the morning, he helps with breakfast. All of it feels new and precious.

“I’m still getting used to it,” Salerno said. “But I like my nice, predictable life.”

The pandemic instantly made his job obsolete and dangerous. People didn’t want outsiders inside their houses, and his position was eliminated. He applied to other jobs in a similar vein, but no one was hiring.

“It was kind of heartbreaking,” Sayles said. So he decided to switch careers, in a big way.

“I always said one day I was going to jump in a big truck and drive,” Sayles said.

He started checking out truck driving classes and found one at John Tyler Community College. He also found grants through the Virginia Ready Initiative and through the state, and the $4,500 courses ended up costing him only $500.

“I couldn’t have done this any other way,” Sayles said.

The Virginia Ready Initiative is a nonprofit that was started a year ago to help Virginians get back to work. VA Ready teams up with community colleges around the state to reskill Virginians and offer a $1,000 incentive to those who get a certification at their local community college. So far, more than 2,000 Virginians have participated.

Glenn Youngkin, the Republican nominee for Virginia governor, co-founded the Virginia Ready Initiative, which is a public-private partnership between the Virginia Community College System and 24 business partners, including Dominion Energy, Bank of America and Genworth Financial.

Sayles went through the program in the summer of 2020 and landed a position as a truck driver before he left school.

“Truck drivers are in demand — there’s so many jobs out there,” Sayles said.

Salary-wise, he is making just under what he’d made in sales, but he believes his salary will rise in the future to be commensurate with his previous income.

For a while, he was driving a route to the Rockies and could spend a day off exploring the geysers at Yellowstone National Park. But after some family members experienced medical problems, he found a route closer to home, traveling up and down Interstate 95 to New Jersey and back.

“It is definitely a lifestyle change. It’s an adventure. It doesn’t work for everybody,” Sayles said. “You’re out on the road, doing something different. We are our own bosses and don’t have to answer to anybody. But you really do have to put your heart and soul into it, otherwise it won’t work.”

The pandemic has shaken up the job industry in a major way.

The hardest-hit industries were employment in arts, entertainment and recreation, where jobs dropped 21.8% in Virginia from 2019 to 2021. Leisure and hospitality were also hard-hit, dropping 20.1% during the same time period, as well as accommodations and food services, which decreased 19.8%.

Almost every industry was hit hard by the pandemic and saw a decrease from 2019 to 2021, such as education, government and financial activities.

Only a handful of industries saw an increase in jobs from 2019 to 2021, such as transportation, warehousing and utilities, which saw a 5.2% gain, and construction which had a 0.8% increase in jobs.

But now that America is reopening, those jobs are returning.

For example, locally, the number of jobs in arts, entertainment and recreation is up 66% from last year and up 52% in leisure and hospitality.

Resignations have been going up since September of last year, according to Bureau of Labor Statistics data.

In April, 4 million people quit their jobs, the highest rate of quits since the bureau started recording that number in 2000. In May, the number of quits fell to 3.6 million, but it’s still a historically high number. It’s leading many researchers to believe that people are quitting their jobs to find something better and more fulfilling.

Jake Maniaci, 34, had a good job as a plant manager in plastics and steel manufacturing at the beginning of the pandemic, but he wasn’t happy.

The former Marine wanted a job that was more creative and that felt meaningful, and he wanted to move with his wife and two kids from the freezing winters of Ohio for the warmth of the South.

“I was messing around on the internet, and I stumbled onto coding,” Maniaci said. He enjoyed the creativity of it and the challenge of getting computers to do what he wanted. After building a career in manufacturing for seven years, he thought about switching careers.

“I thought, if I’m going to make a move, there is no right time. I’d been thinking about it for a year or so. The pandemic felt like a strong time to take that chance,” Maniaci said.

Last July, he put in his notice and signed up for coding classes with coding boot camp Tech Elevator. The days ran 10 to 12 hours for 14 weeks.

Before the boot camp was over, he had landed a job as a software engineer with a defense contracting company in Norfolk, and the family moved to Chesapeake.

“We love it here,” Maniaci said. “Everyone is thriving.”

The job, he said, is more challenging, but he finds meaning in it. His salary isn’t quite what he was making in manufacturing, but there is growth potential to make more in the future.

As a former Marine, working in defense, “I wanted to give back to the service and do something that could help our troops.”

Before, he said, while he was successful at his job and earned profits, he just didn’t find the work fulfilling. “Basically it was milking nickels and dimes out of people all day,” he said. “With tech, I could create something. I’d work with like-minded people interested in the future of technology.”

His new job also offers a hybrid schedule, something his old job didn’t.

“As long as you’re getting your work done, the company is trusting everyone to set your own schedule and your own hours. You make your own pace as you see fit,” he said.

And the family loves living in Chesapeake. They go to the beach once a month. They live in a neighborhood where Maniaci can walk the dog every night and the kids can play in the community pool.

“It’s been a real improvement in our lives,” Maniaci said.

Staff writer John Ramsey contributed to this report, which includes information from The Associated Press.

'The war for talent is on:' With an increase in open jobs, Richmond area employers scramble to fill open positions

Atlantic Union Bank is hiring differently since the pandemic. They’re moving faster, out of necessity.

4 out of 10 employers will fire employees for not returning to office, survey says

Employers responding to a survey about remote workers say they will fire employees if they don’t return to the office.

James Sayles, 51, of Powhatan County stands by his truck in Sandston as he prepares to travel to New Jersey for a delivery. When Sayles lost his job during the pandemic, he used Virginia Ready Initiative and state grants to help pay for courses to become a truck driver.

James Sayles, 51, sits inside his truck in Sandston, VA Tuesday, July 6, 2021 as he prepares to head out to New Jersey for a delivery. Sayles was an electrician since 1988, but lost his job during the pandemic and became a truck driver, what he says is his "dream job".

James Sayles, 51, sits in his truck in Sandston, VA Tuesday, July 6, 2021 as he prepares to head out to New Jersey for a delivery. Sayles was an electrician since 1988, but lost his job during the pandemic and became a truck driver, what he says is his "dream job".