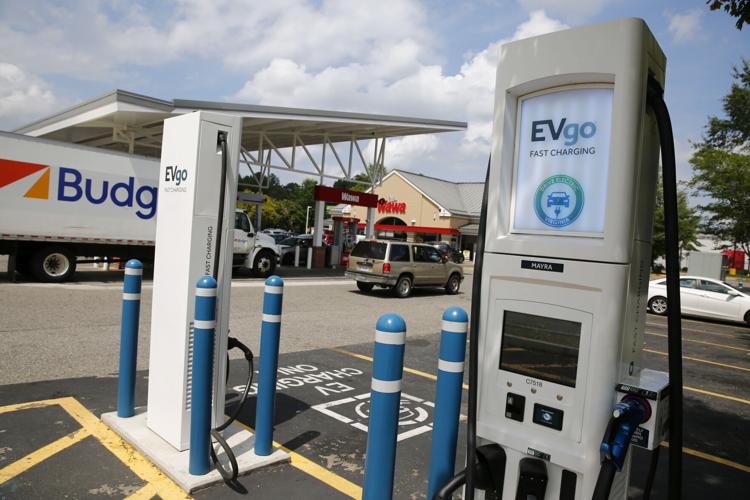 A Wawa store on Brook Road offers EVgo fast charging stations. The chain’s top leaders say Wawa does not make any money off the stations. 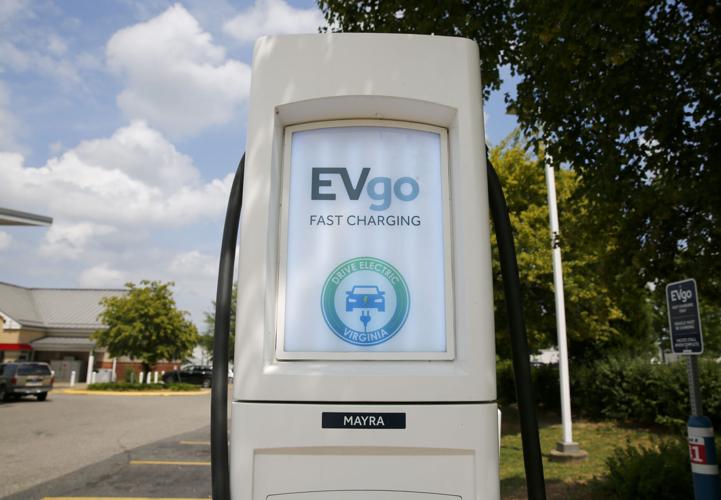 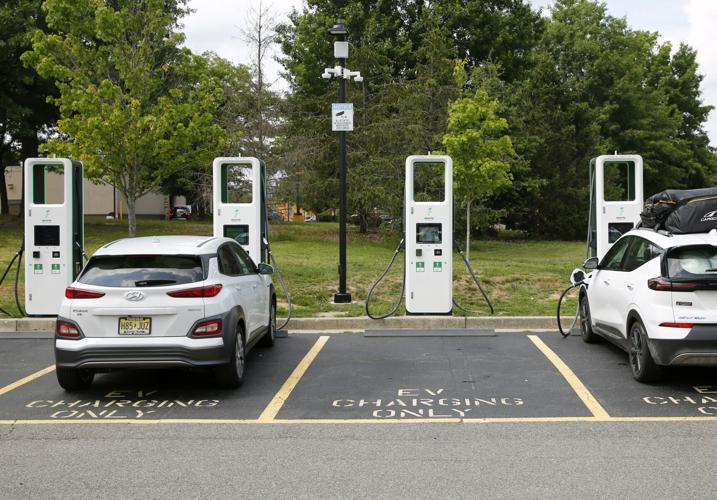 The fast charging ports at Walmart at Brook and Parham roads are among only 832 available statewide; they recharge a car in 20 to 60 minutes. 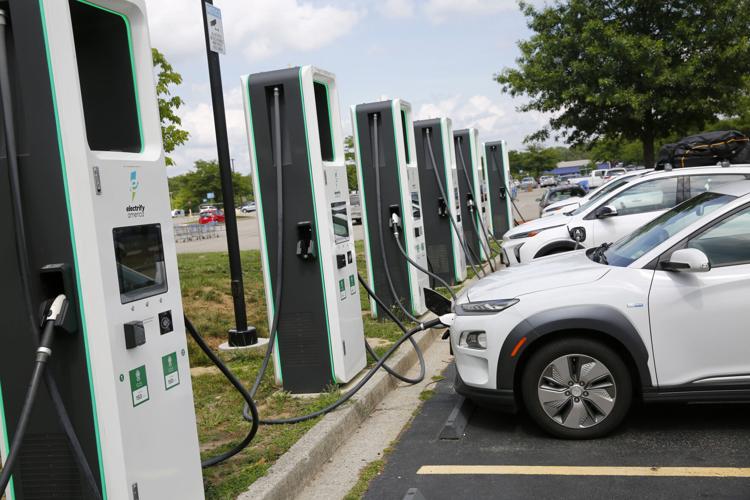 Electric vehicles are charged at a charging station at the end of the parking lot of a Walmart on Brook Road, not far from Interstate 95.

With hundreds of millions of dollars at stake, the federal government wants Virginia to establish an electric vehicle fast charging network. But if ongoing legislative battles in statehouses across the U.S. are any indication, that won’t be easy.

The federal government allocated $106.4 million to Virginia over the next five years to develop an electric vehicle charging network, and the guidance has made clear that the ideal recipients of these funds are the existing gas stations and convenience stores that line every interstate exit in the commonwealth. However, under current regulatory policy, it’s difficult for any of those gas stations to get into the EV charging business without operating at a loss.

According to the U.S. Department of Energy, Virginia has 2,182 slow charging ports, which take up to eight hours to charge an electric vehicle. But there are only 832 direct current fast charging ports available statewide; they recharge a car in 20 to 60 minutes.

The sparsity of fast charging ports across U.S. highways is one of the main deterrents of consumers buying EVs, and is the reason behind the federal funding allocated to states.

At a fast charging station on Brook Road in Henrico County on Thursday afternoon, New Jersey resident Linda Murphy filled up her car.

The Electrify America charging station in Henrico is situated at the end of a Walmart parking lot, not far from Interstate 95, where Murphy was driving.

“That’s the only problem — at nighttime, stopping at these places by yourself,” Murphy said. “If it was along the route, where there’s the big stops, like the big truck stops, that would be better.”

Most EVs will run out of juice and need a full recharge after about 250 miles, which is no big deal for someone who’s using it to commute and can recharge it for eight hours a night. But the “range anxiety” caused by the lack of abundant fast charging ports along U.S. highways is one of the biggest things preventing people from buying an EV (besides price, which will come down eventually). A Consumer Reports survey this month asked people why they wouldn’t get an EV, and 61% said “charging logistics” were the biggest barrier.

To remedy that barrier, U.S. legislators passed the bipartisan Infrastructure Investment and Jobs Act signed by President Joe Biden last year, part of which is intended to jump-start the high-speed EV charging network with a big bucket of federal cash. The $7.5 billion investment supports Biden’s goal of building a nationwide network of 500,000 EV chargers.

The first $5 billion of that $7.5 billion must go toward the federally designated “alternative fuel corridors,” which in Virginia include interstates 64 and 95 which intersect in Richmond and run through Henrico and Hanover County. The designation also includes Virginia’s interstates 66, which runs across Northern Virginia, and 81, which runs from Northern Virginia down through Roanoke and Bristol.

The guidance put forth by the National Electric Vehicle Infrastructure Program states that the sites should have onsite amenities like food and restrooms, be compliant with the Americans with Disabilities Act, and meet height and fueling capacity requirements to accommodate large vehicles. The guidance is apparently describing existing gas stations and convenience stores.

This year could be pivotal for EVs, with high gas prices encouraging the public to consider going electric, $7.5 billion to jump-start the charging network, and almost every major auto manufacturer promising to ramp up their EV offerings.

The major question hanging over the EV charging industry is how much control power companies will wield over the fledgling industry.

The clock is ticking

With an Aug. 1 deadline looming, state transportation officials are putting together a plan to apply for millions in EV charging funding.

A VDOT spokesperson said the initial plan will be focused on building public direct current fast chargers on the federally designated alternative fuel corridors in order to meet federal requirements, while also supporting charging in rural and disadvantaged communities.

VDOT has collaborated with state agencies and solicited input from current and potential EV drivers, according to a VDOT spokesperson. A public survey posted on VDOT’s website received survey responses from about 870 individuals as of Thursday, according to VDOT.

Dominion Energy, the largest investor-owned utility in Virginia, confirmed that its employees are also involved in hatching the plan.

The major obstacles for any private retailer hoping to sell EV charging come from the public utilities, according to several gas station and convenience store owners.

“I think most customers don’t realize that Wawa is not making any money offering EV charging,” said Rich Macon, Wawa’s vice president of fuel. “Knowing exactly what the cost is before purchasing the electricity to resell to the customer ... would help with lowering costs because it would make it a more traditional business model than what we have [now]. It’s very difficult to understand the cost of your electricity because of the demand charges that the utilities include.”

Wawa and other fuel retailers say the monthly “demand charges” on their power bill render high-speed EV charging unprofitable. A demand charge is a fee based on the maximum amount of power being utilized by a commercial power customer at one time. A high-speed EV charge, which pulls 125 kilowatts or more of electricity at once, will cause that demand charge to spike. When retailers have only a handful of EV charging customers per month, the hefty fee is spread across just a handful of customers.

Chicken or the egg

Kate Staples, director of electrification and new technologies at Dominion, said there’s a reason for those charges.

“Demand charges are intended to help electric companies make sure the grid is appropriately sized, and make sure that it’s most affordable for all customers,” Staples said in an interview. “A customer that might pay a higher demand charge, it’s probably because we have to put in some more expensive infrastructure for that customer.”

Right now, many retailers say they are hesitant to offer EV charging because there aren’t enough customers. And drivers say they are waiting until there are more charging stations before they will buy an EV. It’s a chicken-or-the-egg scenario, said Jay Smith, executive director of Charge Ahead Partnership, a coalition of fuel retailers, convenience store owners and other private retailers who want to get into the EV charging business but say impediments like demand charges imposed by the public utilities make it impossible.

“Retailers need to have certainty that they can compete on a level playing field,” Smith said. “The utility, the power companies can still at any point come in and compete with a retailer with an unfair advantage.”

Legislatures in such states as Florida, Georgia and Ohio have considered bills determining whether public utility or private industry will have control of the EV charging network. Louisiana lawmakers just passed a bill directing the Public Service Commission to come up with a fair rate for the resale of electricity for EV charging. No such bill has been introduced in Virginia’s General Assembly.

Smith said the uncertainty causes worry that public utilities will set up their own charging stations, and avoid charging themselves demand charges by using money from ratepayers to subsidize the costs.

“Retailers don’t have that option to just send everybody in Richmond a bill to pay for the EV charger that someone’s going to put in at a Wawa or a Sheetz,” Smith said. “Because the power company has that ability to get people like you and me to pay for it on our bill, that’s how they’re able to then get into business and have a huge advantage. They don’t have to recover those costs from the EV driver.”

Staples said Dominion does not want to compete head-to-head with private retailers.

“We want our customers — all of them — to be able to drive electric and get those benefits,” Staples said. “If there are places where the private market isn’t able to serve, or isn’t able to install chargers, that could be a place where Dominion could help.”

“Once we get clarity that subsidizing ratepayers is not allowed to happen in a state,” Smith said, “that gives retailers the confidence to know they’re not going to be undercut and have to compete against somebody who has this huge business advantage.”

From the archives: More than 240 photos of Richmond and Virginia in the 1970s