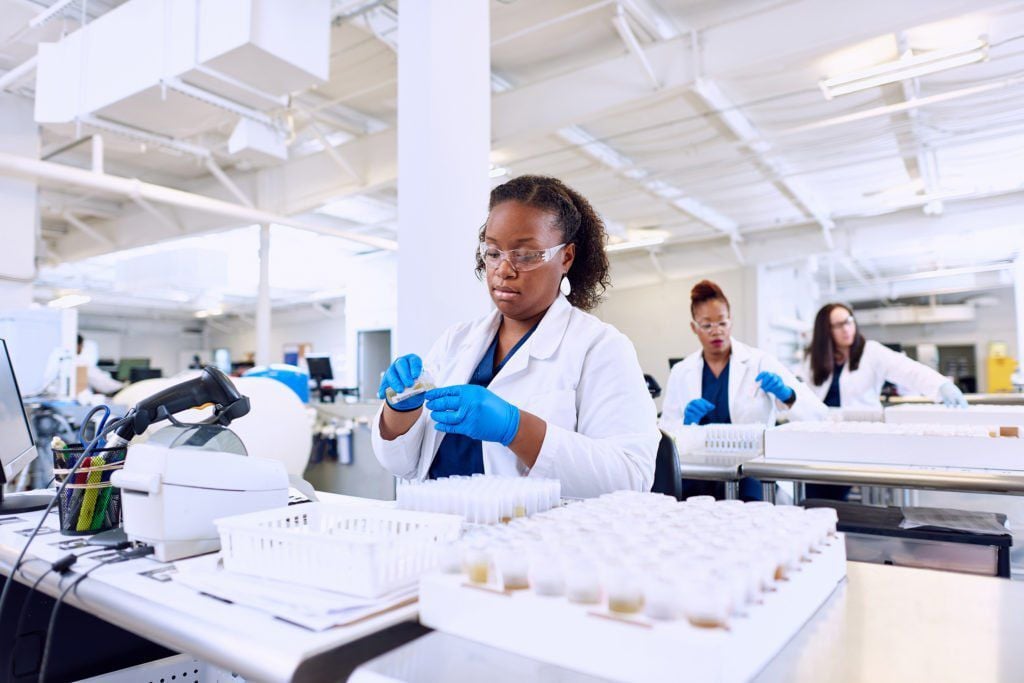 Technicians work at the St. Louis lab of Averhealth. The company’s goal is to give a testing report to whatever professional is working to monitor and support a patient. 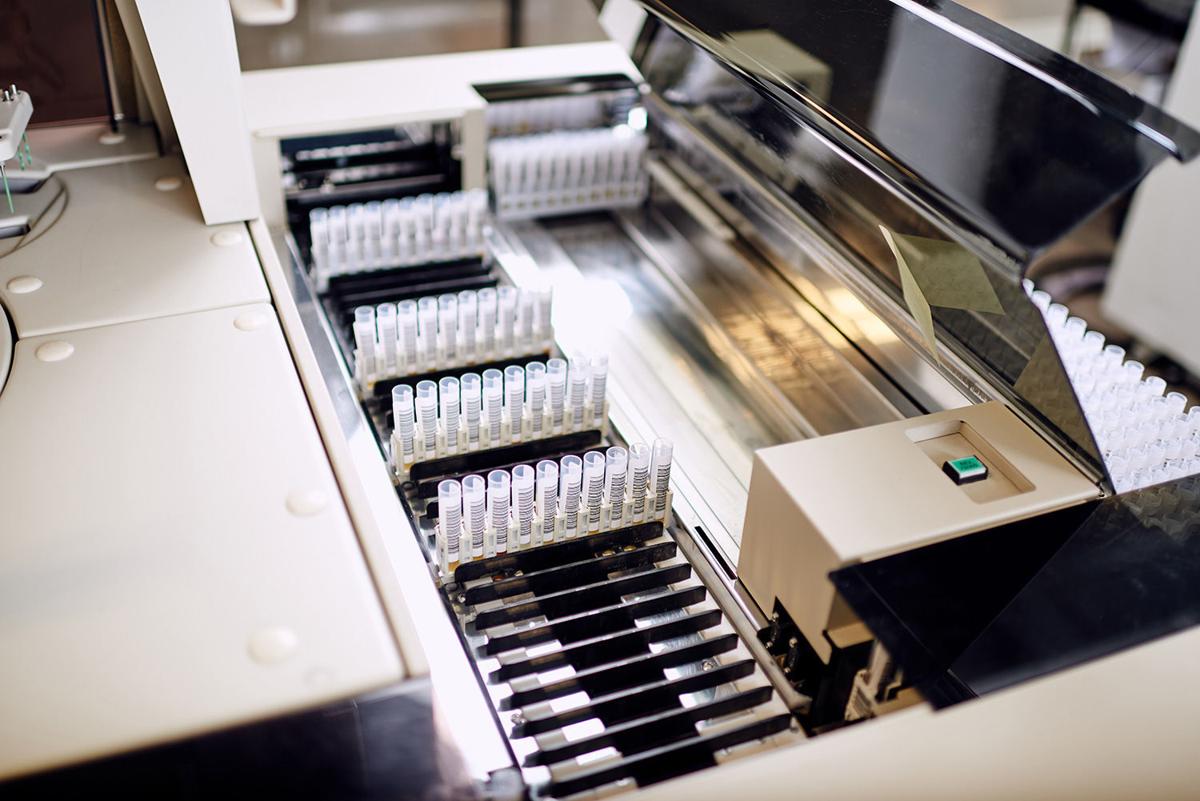 Before the pandemic-related safety measures caused employees to work remotely, Richmond-based Averhealth had about 50 members of its corporate staff working in its 8,000-square-foot Scott’s Addition office. Its rapid growth in the past few years has put it on the Inc. 5000 list, two years in a row, of fastest-growing privately held companies. 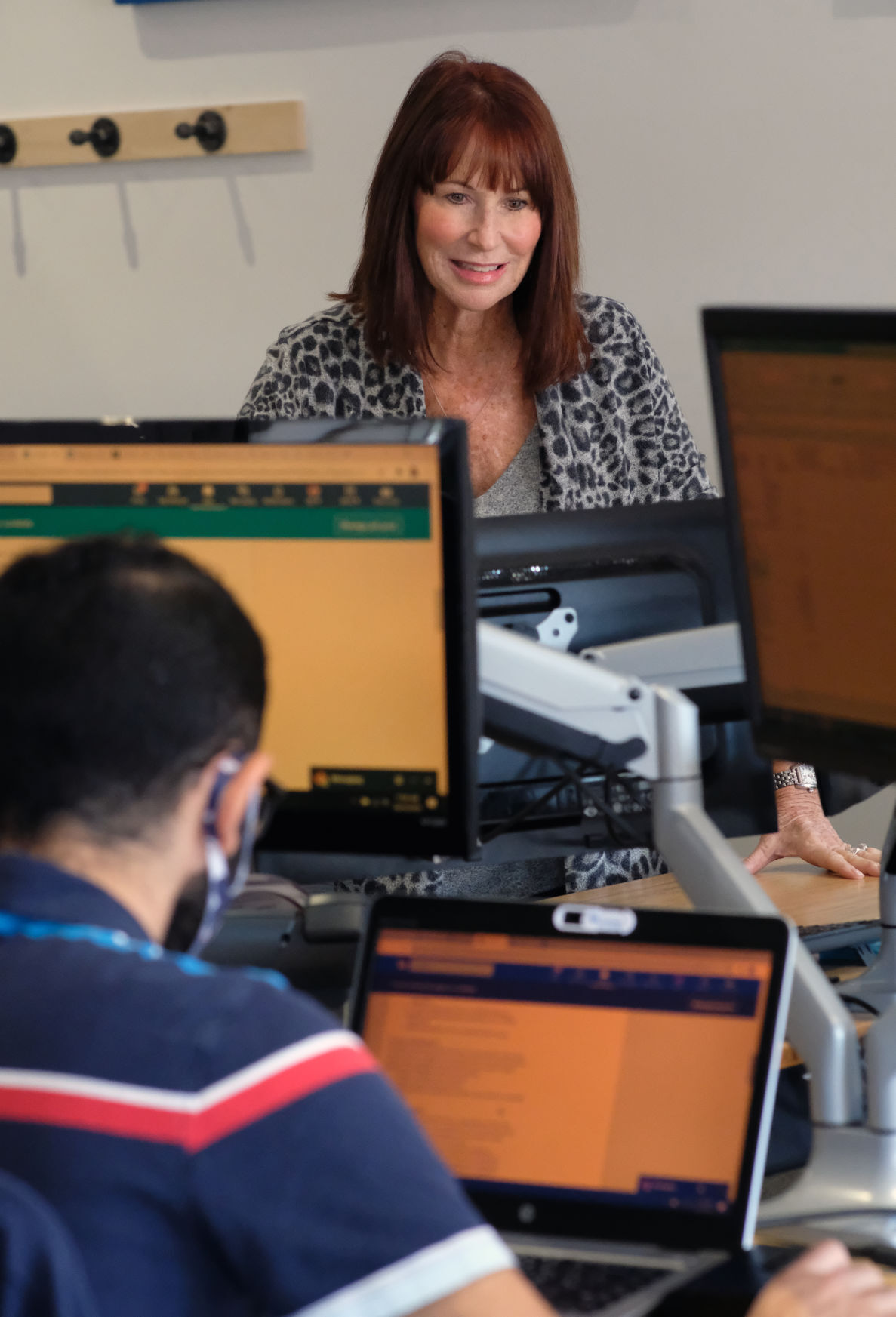 Jacquie Sheehey, Averhealth’s director of marketing and partner relations, said, “We feel like we are indirectly making a difference in individuals’ lives, and seeing those individuals truly reach recovery.” 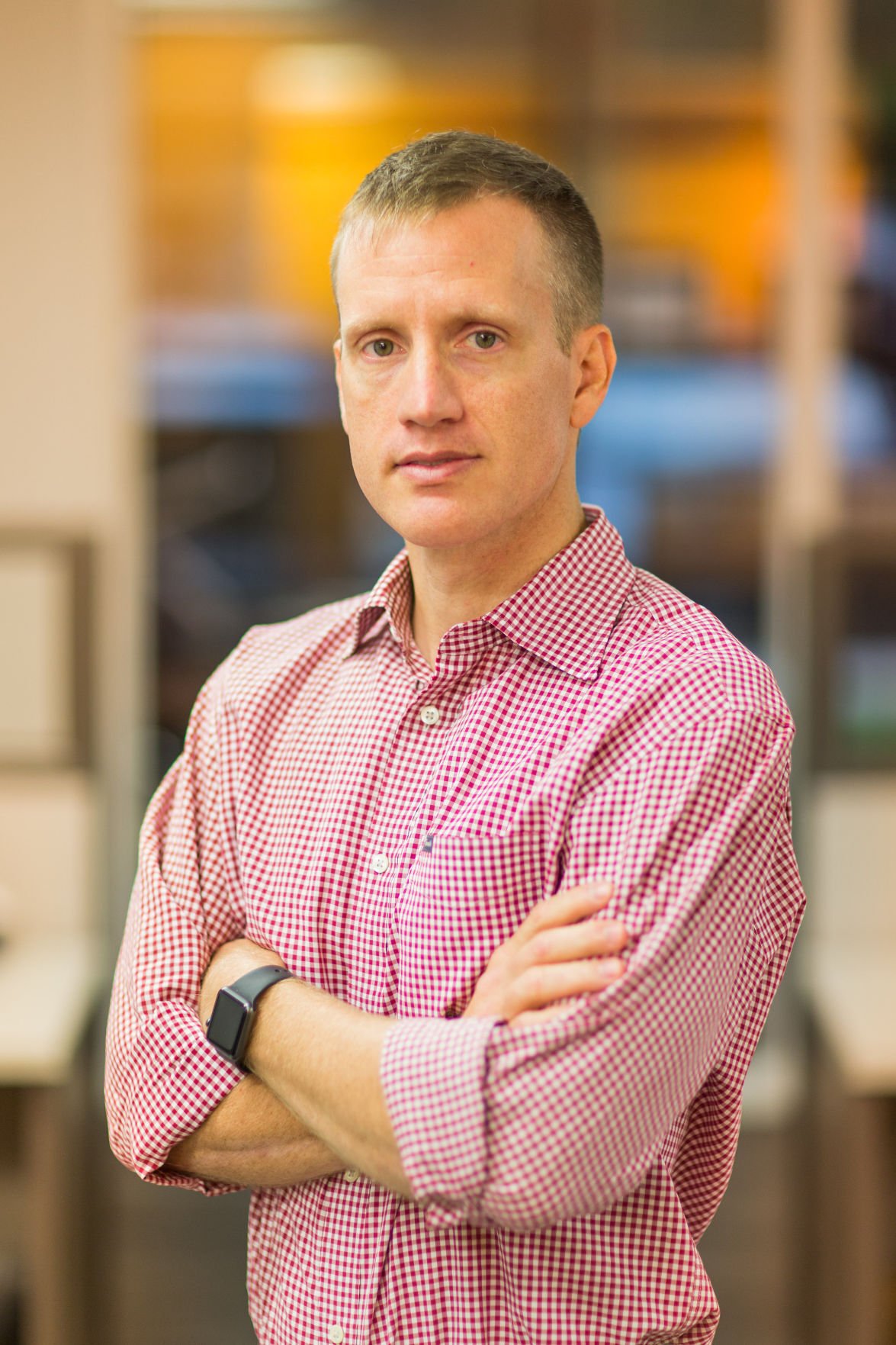 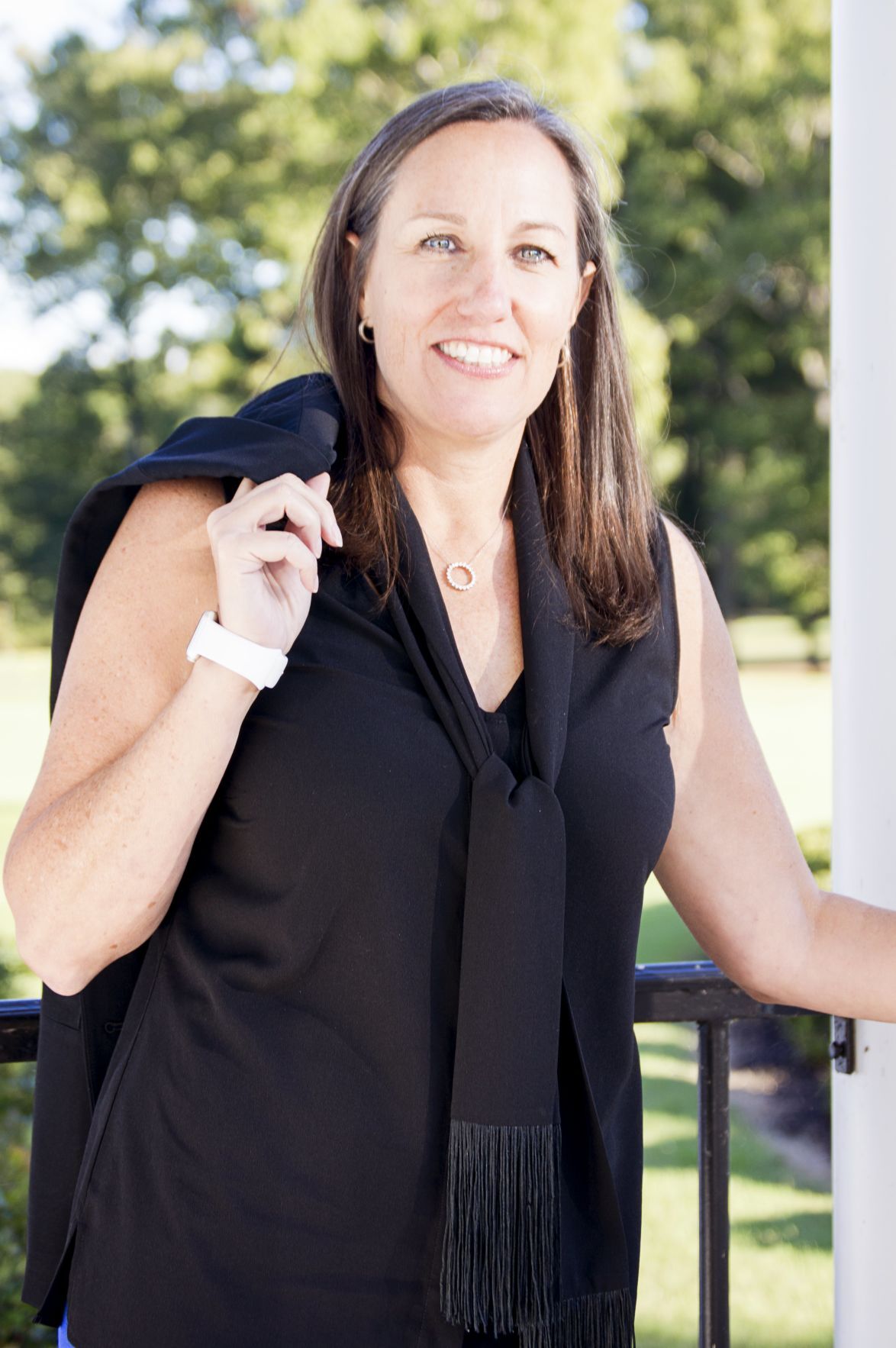 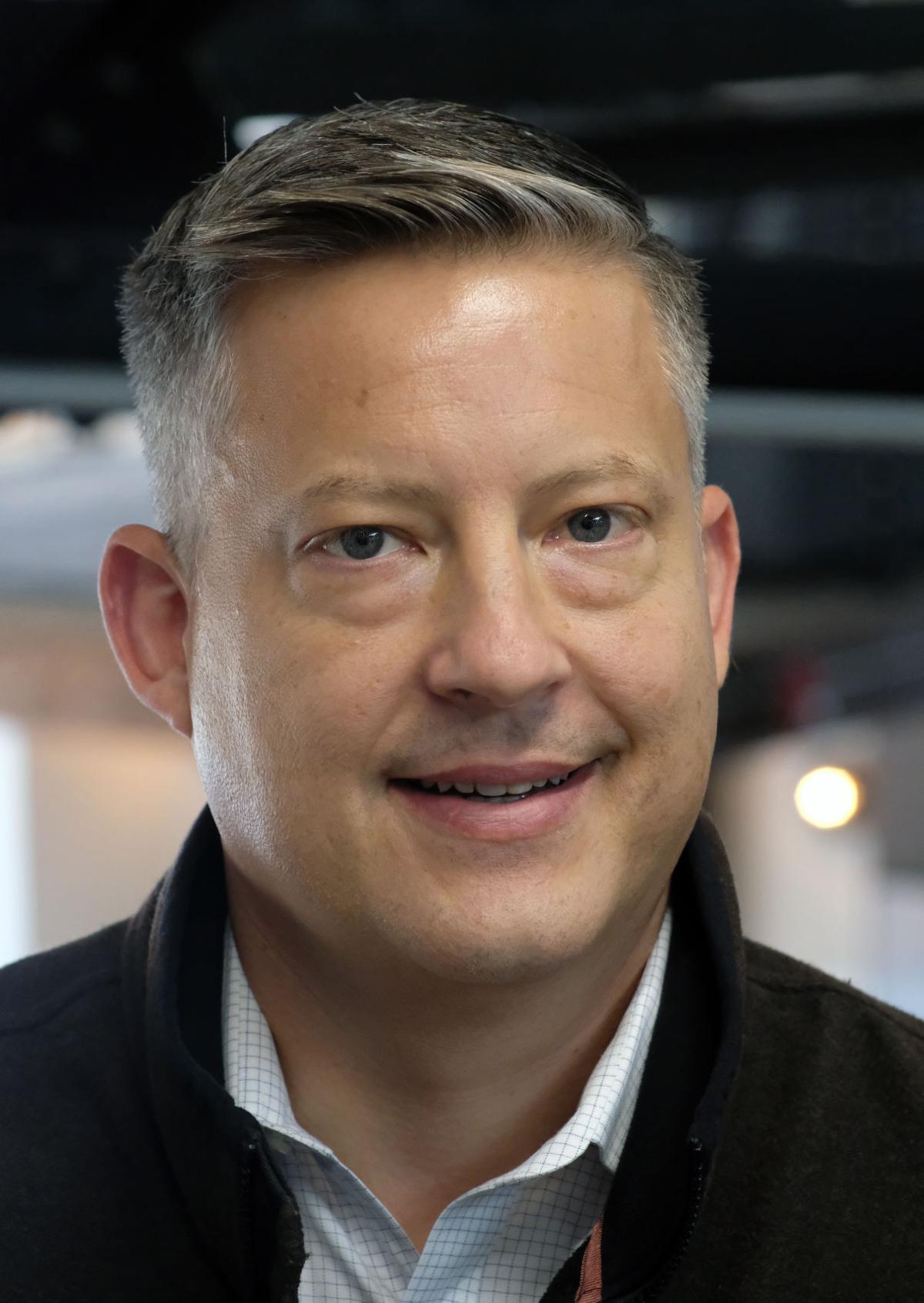 A mission statement posted in the Richmond headquarters of Averhealth says the company’s goal is to “reclaim lives, unite families and strengthen communities.”

It is a mission statement that the company’s executives say continues to be the underlying, motivating force for the company’s staff, even as Averhealth itself has grown significantly from a small business with a dozen employees 10 years ago to a company that now has a nationwide reach and more than 500 workers.

Averhealth works at the intersection of the justice system and healthcare.

The company contracts with drug courts, mental health courts and substance abuse programs around the nation to manage drug-testing programs for individuals who have been referred to treatment programs because of addiction.

The daily work of the Averhealth staff is to administer the drug tests, analyze them and then provide information that case managers, court officers and counselors can use to help people with recovery.

“We don’t provide treatment, but we provide services that enable treatment,” said Jason Herzog, a co-founder, co-chairman and chief executive officer of Averhealth.

The ultimate goal “is really about positioning the patients for success,” Herzog said, adding that Averhealth has developed a management system, a laboratory service and a technology platform designed to make the process more efficient and effective.

Averhealth is now working with about 1,800 courts and treatment providers that oversee about 400,000 patients. Executives say the company’s growth has been propelled by an increased emphasis on drug treatment for non-violent offenders whose crimes are drug-related.

“If someone has committed a non-violent offense and their underlying issue is they have substance-abuse disorder, then incarcerating that individual is not really going to help them,” said Dominique Delagnes, Averhealth’s chief operating officer. “If they don’t get any treatment, then when they get released they will go right back to using drugs again.”

Most of the company’s 500 employees are patient care technicians who work in Averhealth’s offices in 30 states. Those technicians enter information on new patients — most of whom have been referred by one of the nation’s 5,000 drug treatment, DUI or mental health courts — into the Averhealth program.

The technicians regularly collect urine, oral fluid or hair specimens from patients. Those specimens are shipped to Averhealth’s laboratory in St. Louis where the samples are analyzed.

The company’s goal is to provide a report on each test within 24 hours to whatever team of professionals is supporting and monitoring that patient, typically including probation and parole officers and counselors.

“We take much of the burden off of the probation officers and case workers, so they can focus on their jobs and not worry about the drug testing,” Delagnes said.

To develop the platform, Herr and Herzog worked with ProfitOptics, a Henrico County-based software development and IT consulting firm that continues to have a partnership with Averhealth.

The platform is designed to offer customizable testing and treatment plans for each patient, said Herr, who now lives and works in North Carolina and serves as the company’s co-chairman and chief information officer.

Each patient has a profile created in Aversys that includes information from clinicians about how and when that patient needs to be tested. Counselors and court officers can have daily interactions with each patient through the Aversys system and patients get customized messages from their care team. Aversys also is used to help manage the company’s laboratory operations.

“The goal of the technology is to enable our people and our laboratory to do what they do much better, and to put powerful analytics and data at the fingertips of case managers and clinicians so they can make better informed decisions about their patients,” Herr said.

Averhealth has seen rapid growth in the last few years, fast enough to put it on the Inc. 5000 list of the nation’s fastest-growing privately held companies two years in a row.

The company was much smaller in 2011 when Herzog and co-founders Jeff Herr and David Keys acquired it. At the time, the business — founded in 1995 as Global Testing Services — was based in California and had about a dozen employees. It was providing drug testing for about 1,000 patients.

Herzog, Herr and Keys had worked together for several years at Harris Williams & Co., the mergers and acquisition advisory firm based in Richmond. After leaving the firm in 2010, the three decided to partner in a search for opportunities to invest in a business that they could grow.

Herzog said he had felt an “entrepreneurial itch” since his time as a business student at the University of Chicago. “I finally built up the guts to go and pursue that itch,” he said.

Herr said he felt the same thing. At Harris Williams, “I helped create strategies for other companies, but I was not in the trenches with those clients. They were the ones who had to go out and execute on those strategies,” Herr said.

“I knew my professional development and what I wanted to accomplish would not be complete until I took a risk and put myself in my client’s shoes,” Herr said.

After considering various business opportunities, the partners decided that Averhealth had a business model that could grow and make an impact.

“We were excited about not just the business opportunity, but an opportunity to do something that did have a social impact,” Herr said.

Keys has since left management of the company to work in consulting again, but he retains an ownership stake.

“The people with the company really made things easier for their clients — the courts, the treatment providers and the patients for that matter,” Herzog said. “As we dug in, we thought if we added technology, it was something we could scale and take from one state to multiple states.

As it grew, Averhealth opened a central laboratory in St. Louis to analyze samples for all of its patient care centers, rather than having analyzing equipment at each center.

“Our thesis was that we would get far better science by putting the lab in a central location,” Herzog said. The St. Louis lab can test for about 1,500 different substances.

“Since 2011, we have steadily added customers and states,” Herzog said. “We have generated an average growth rate of 40 percent” per year.

Almost all of that has been organic growth, but this year the company added to its footprint by making two acquisitions.

In October, the company acquired American Court Services, which provides court-mandated drug and alcohol testing and electronic monitoring in Ohio.

Averhealth’s goal is to continue to expand into all 50 states and perhaps develop an international market in a few years, Herzog said.

The company’s potential market in drug testing is about $2.2 billion annually, he said. “We are only a tiny bit of that,” right now, he said. “We have a huge runway in front of us. Even though we are in 30 states, there is not a state where we have 100% market penetration, so even growing in the states where we are now presents a huge opportunity for us.”

Averhealth’s corporate staff works in an 8,000-square-foot office in Scott’s Addition, in a former truck garage on West Marshall Street that has been renovated into office space.

The office, which houses functions such as human resources, finance and marketing, normally would have about 50 people, but since the COVID-19 pandemic most of the employees have been working from home, with each department rotating days in the office. Only about 10 people are working in the office now on a typical day.

“We support the field,” Herzog said. “We’re supporting business development, and we are supporting all of our business operations across the 30 states.”

In the corporate office, the mission statement remains in everyone’s mind.

“We feel like we are indirectly making a difference in individuals’ lives, and seeing those individuals truly reach recovery based on everything we are providing here,” said Jacquie Sheehey, Averhealth’s director of marketing and partner relations.

“I know that we are changing people’s lives,” said Delagnes, a seven-year employee of the company. “I have close family members that have suffered from addiction, so I understand just how much it affects people’s lives and how difficult it is.”

A J.Crew Factory store is opening in the Willow Lawn shopping center in mid-August.

Eight years after creating a jewelry and accessories business, Charis Jones is on a roll.

Retailer Pep Boys has stopped selling auto parts and related items at its Richmond-area stores to concentrate on service repairs and tire sales.

Are you interested in NFTs? You will have to use them eventually. What does your future hold?

Technicians work at the St. Louis lab of Averhealth. The company’s goal is to give a testing report to whatever professional is working to monitor and support a patient.

Before the pandemic-related safety measures caused employees to work remotely, Richmond-based Averhealth had about 50 members of its corporate staff working in its 8,000-square-foot Scott’s Addition office. Its rapid growth in the past few years has put it on the Inc. 5000 list, two years in a row, of fastest-growing privately held companies.

Jacquie Sheehey, Averhealth’s director of marketing and partner relations, said, “We feel like we are indirectly making a difference in individuals’ lives, and seeing those individuals truly reach recovery.”