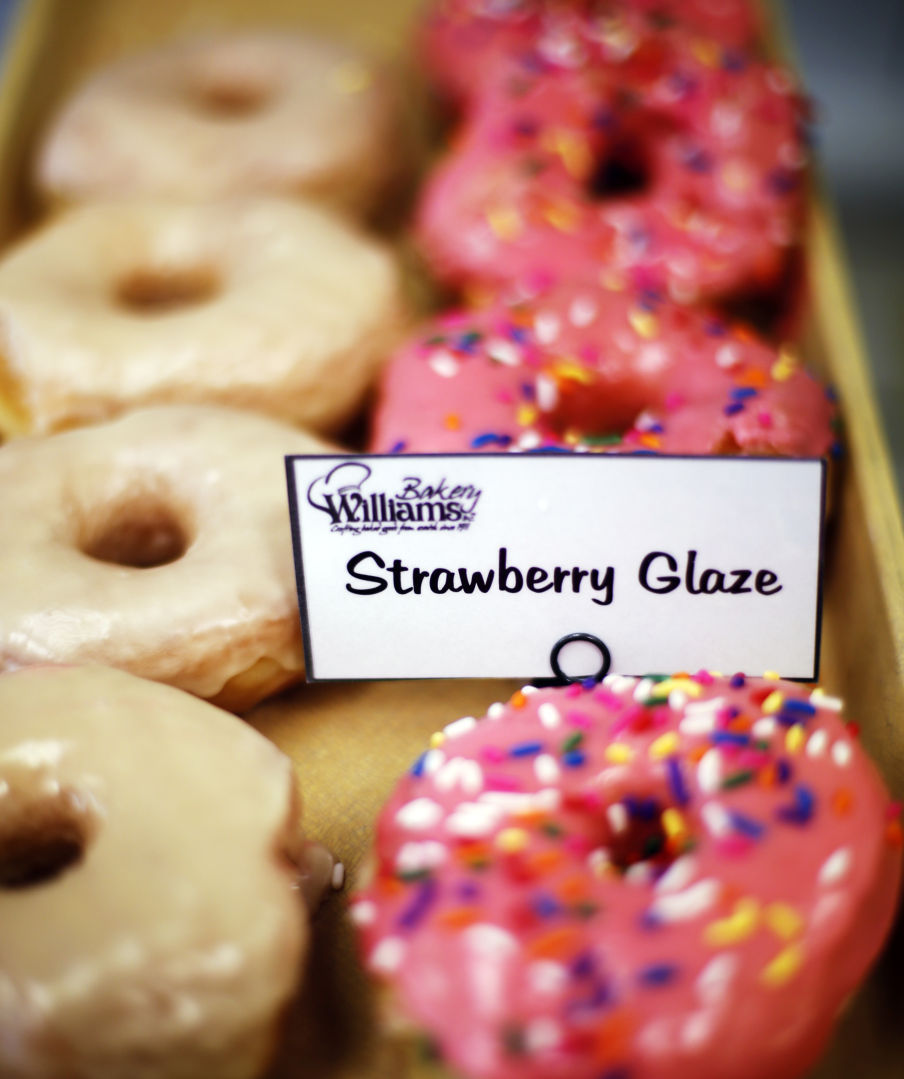 Strawberry Glaze donuts await early-morning customers in the display case at Williams Bakery in downtown Mechanicsville con Nov. 13, 2014. The process of making donuts from scratch begins each morning in the family bakery at 1:30am. 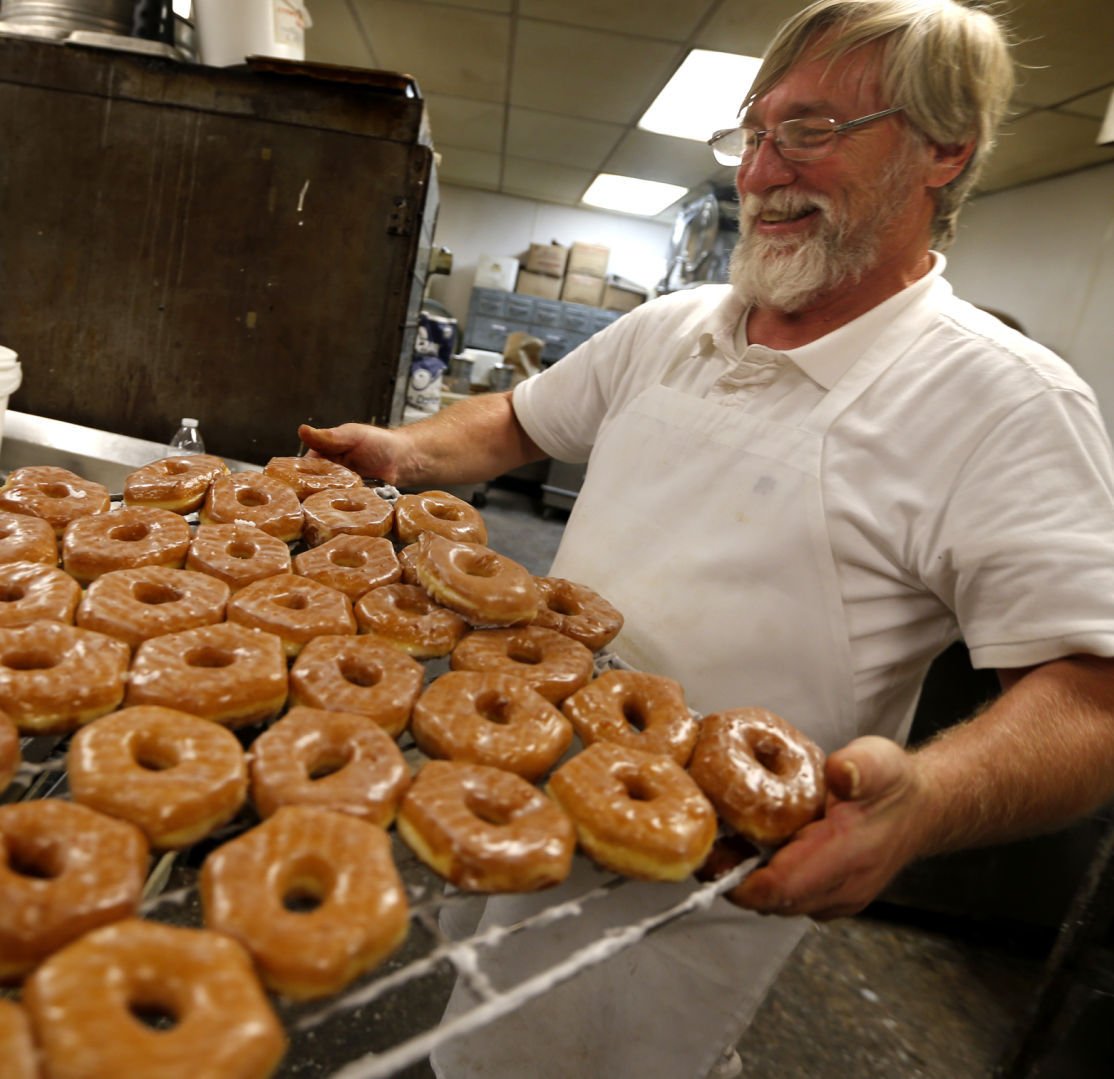 Ron Williams, a third-generation baker who owns Williams Bakery in Mechanicsville, checks a batch of doughnuts early in the morning 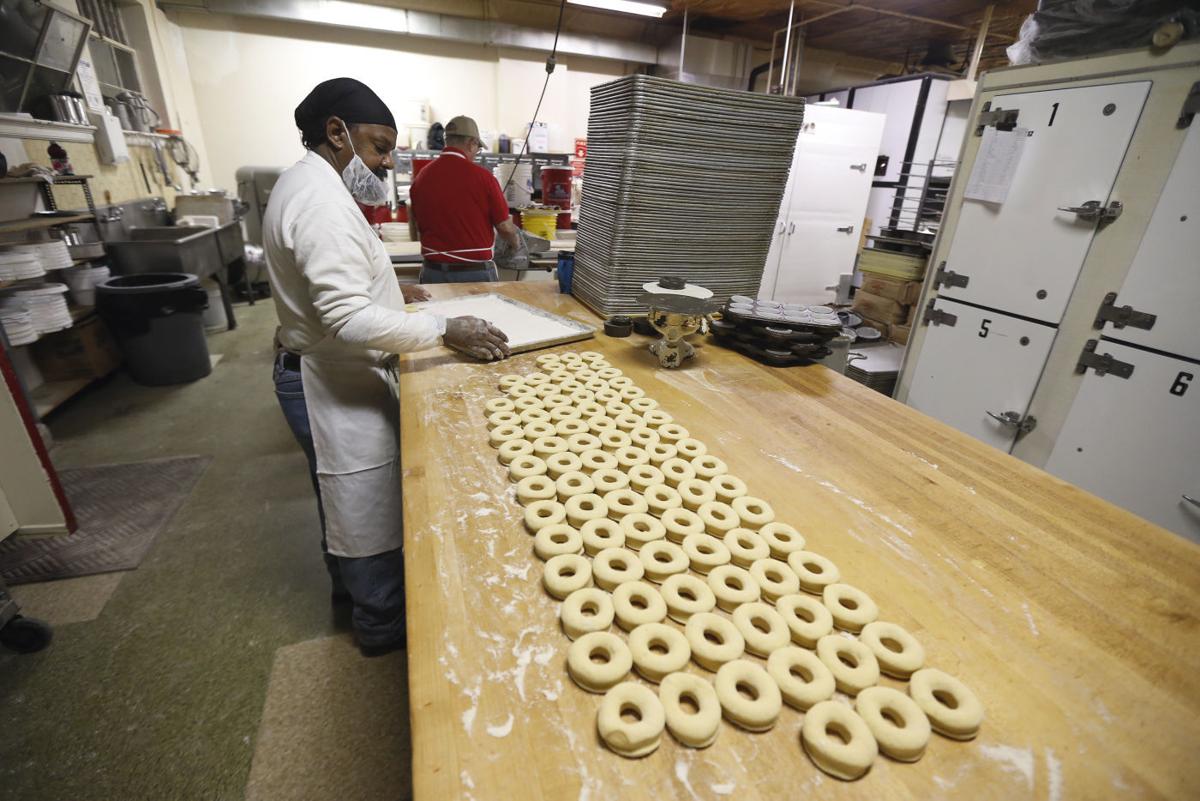 Antoine "Mr." Wills readies hand cut donuts on bakers pans to ready them for deep frying at the Westhampton Pastry Shop at the corner of Libbie and Patterson. 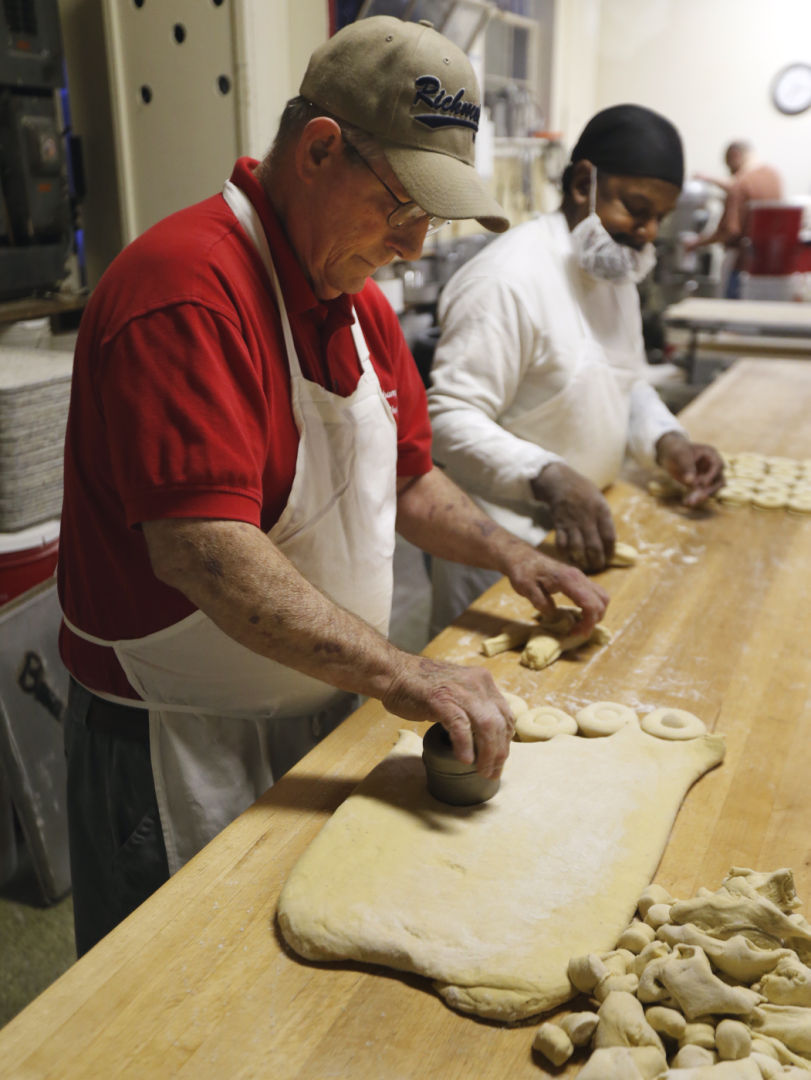 Owner Guy "Boots" Rogers hand cuts donuts at the Westhampton Pastry Shop at the corner of Libbie and Patterson.At right, Antoine "Mr." Wills lines them up to ready them for frying.

At 6:15 a.m., Guy “Boots” Rogers III is kneading and stretching a nearly 12-foot-long log of dough in the back of Westhampton Pastry Shop.

This kneading, stretching and punching is called “relaxing the dough,” a process that makes it both strong and tender before he cuts doughnuts out of the long roll of dough, which is about an inch-and-a-half thick and a foot wide. The dough is tight and springy to the touch, with an elastic tension.

“I’ve been working on this recipe for over 30 years, and I haven’t changed it in 12 years,” Rogers said. “This is as good as I know how to get it.”

“I’m not going to give that secret away,” he said with a smile.

Doughnuts are all the rage in Richmond these days, with local shops and national chains both racing to open new locations. But some bakers, like Rogers, have been practicing the art of the perfect doughnut for decades.

Long before dawn, bakers around Richmond head into warm, airy spaces filled with the mingled smells of cakes, bread, danishes and doughnuts.

Rogers has been baking at Westhampton since his father — Guy N. Rogers Jr. — bought the pastry shop at Libbie and Patterson avenues in 1976.

Before that, three generations of Rogers baked at Thalhimer Bros. department store. Guy N. Rogers — Boots’ grandfather — started the Thalhimers bakery. Boots started learning how to make doughnuts when he went to work there at age 16.

Fifty-four years of baking have left Rogers with strong arms and thick, knotted fingers. He holds a round metal cutter in his right hand and moves rhythmically down the line of dough, pausing each time he has cut out six doughnuts to drop them onto a tray.

There’s a huge calcium deposit on his right thumb, a mark left by the millions of doughnuts Rogers estimates he has punched out with that cutter, which has cracked under the pounding it receives from cutting up to 70 dozen doughnuts each day.

The job is as hard on Rogers’ body as it is on the doughnut cutter.

Baking also runs in the family of Ron Williams, who owns Williams Bakery.

His main shop in Mechanicsville is where all the baking is done, but he also operates locations on East Nine Mile Road in Henrico County and at the Hanover Commons shopping center on Chamberlayne Avenue in Hanover County.

Bert Williams, his grandfather, opened a bakery at 33rd and Marshall streets in Church Hill in 1911. Ron points to a picture of his grandfather and other bakers standing in front of a wood- and coal-fired oven.

“Look at how big their forearms are,” he said. “They didn’t have mixers.”

The mechanical mixers Ron uses today aren’t much younger than that century-old photograph. They’re 60-year-old models he bought from Miller & Rhoads when the department store closed its bakery.

Bill Williams opened W.H. Williams Bakery of Mechanicsville in 1963. The name was shortened in 1978, and Ron, like Boots Rogers, worked for his father and took over the family business in 1990.

“I make my dough a bit differently from Boots,” Ron Williams said.

Rogers said every doughnut maker has his own tricks.

“If four people came in here and rolled doughnuts, you’d get four different doughnuts,” he said.

The recipes may be different, but the penchant for secrecy isn’t.

Williams said he wouldn’t say more about his recipe, other than the fact it’s different.

Both men did say, however, that doughnuts account for about 20 percent of their total sales.

A new addition to the doughnut lineup at Williams Bakery is one with pink glaze and sprinkles. Williams made them for his 3-year-old grandson, who had spied a similar doughnut while living in Europe and decided nothing else could compare.

“My son came home for a vacation, and he asked if I would make them for his son,” Williams said.

Back at Westhampton Pastry Shop, the first trays of doughnuts are wheeled into a proof box before 7 a.m.

The 8-foot-tall box is filled with steamy, warm air, which helps the doughnuts rise. Then, the trays are wheeled to the back door, where cool air dries the dough before it’s fried.

Rogers nearly stopped making doughnuts a decade ago, when his insurance company said it would drop coverage if he didn’t make expensive upgrades to his exhaust hood and wiring.

A pharmaceutical rep who was a loyal customer was so dismayed by his decision that she talked to her father, who was a contractor.

The contractor, also a fan of Westhampton’s doughnuts, called Rogers and said he and some electricians at his church could buy a new exhaust hood and redo the wiring for under $10,000, less than half of what other contractors were saying it would cost.

But even with the lower price, the upgrade would make sense only if sales grew. That’s when Rogers started printing yellow bumper stickers that say “W.P.S. Donut Squad.”

“We grew our doughnut business two-and-a-half or three times above what it was,” he said.

Rogers said he can’t make much more than 70 dozen a day because his employees can fry only two dozen at a time.

About half get dipped in glaze only, while the rest also get a coating of chocolate. An employee uses two long, wooden doughnut sticks — they resemble knitting needles — to flip each doughnut after 45 seconds and then pull onto a rack to dry.

At 7:17 a.m., as the first doughnuts are going into the fryer, the front bell rings.

The first customer of the day is here, looking for a dozen.

Richmond's a sweet spot for doughnuts

Richmond is in the midst of a doughnut boom that is reshaping the way we get our sugar fix.

Strawberry Glaze donuts await early-morning customers in the display case at Williams Bakery in downtown Mechanicsville con Nov. 13, 2014. The process of making donuts from scratch begins each morning in the family bakery at 1:30am.

Ron Williams, a third-generation baker who owns Williams Bakery in Mechanicsville, checks a batch of doughnuts early in the morning

Antoine "Mr." Wills readies hand cut donuts on bakers pans to ready them for deep frying at the Westhampton Pastry Shop at the corner of Libbie and Patterson.

Owner Guy "Boots" Rogers hand cuts donuts at the Westhampton Pastry Shop at the corner of Libbie and Patterson.At right, Antoine "Mr." Wills lines them up to ready them for frying.