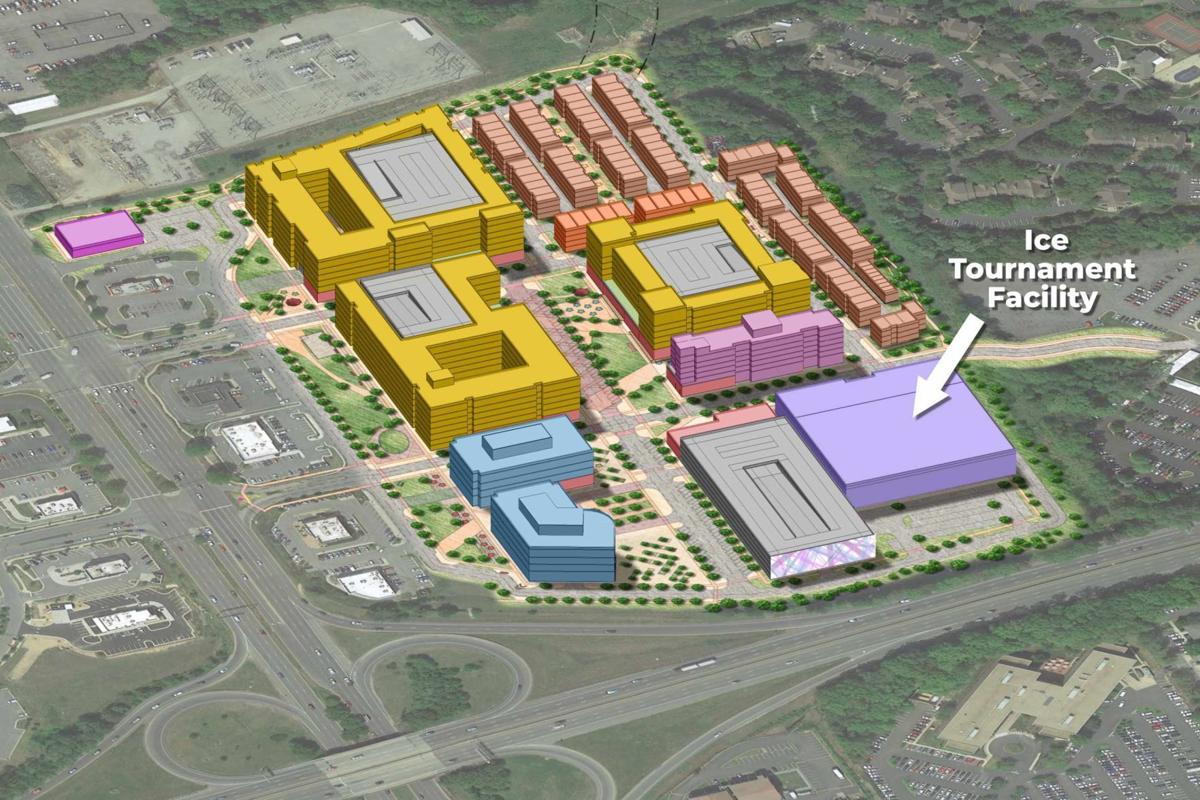 A 100,000-square-foot ice facility and sports entertainment complex is planned on the site of the Spring Rock Green shopping center at Midlothian Turnpike (road on left) and Chippenham Parkway (bottom of map).

Former catalog retailer Best Products once operated in this building in the center. 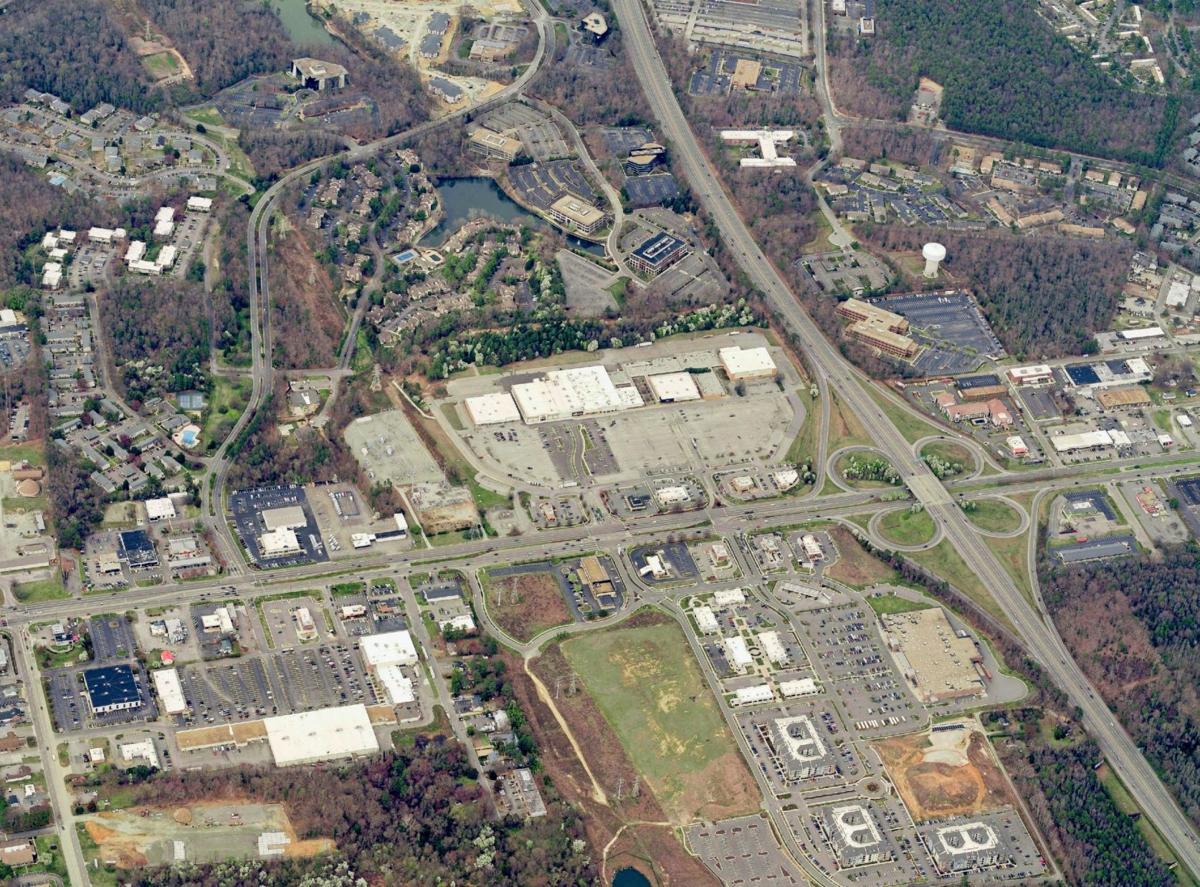 Chesterfield County is planning to build a 100,000-square-foot ice rink and sports entertainment complex on Midlothian Turnpike at Chippenham Parkway to attract tournaments to the region and strengthen the area’s youth hockey and ice-skating programs.

The complex would be the largest ice facility in the Richmond region and would feature two National Hockey League-size ice rinks — a first in the area.

The sports entertainment facility would be a focal point of a planned mixed-used development on the site of the aging Spring Rock Green shopping center, which is across Midlothian Turnpike from the 83-acre Stonebridge multiuse development.

Plans call for tearing down the Spring Rock Green center next year to transform it into a development with apartments, offices, restaurants, shops and the sports complex.

Construction on the ice rink complex — which would be closest to Chippenham Parkway on the site of the former Best Products catalog showroom store building — and the first phase of the mixed-use development should start in the summer of 2022 and be ready in the fall of 2023.

“From our conversations with people, having two rinks in the same facility would allow us to attract youth hockey tournaments and the league play. Only having one rink in one facility would not allow us to do that right now,” said Matt McLaren, the senior project manager for the Chesterfield Economic Development department.

Plans would include having enough seating and other amenities that would be needed to host tournaments and special events, he said.

“At the economic development level, it is the ability to bring people from outside the region, their spending dollars, and the ability to put people in hotels and host these types of tournaments in the Richmond region,” McLaren said.

Besides, the new ice rink facility would allow for more ice hockey league play and to be used for other skating programs, from holding classes on how to skate to having public skating and figure skating activities.

All three facilities have a single ice-rink.

The owners of those ice rink facilities could not be reached for comment.

The Chesterfield Economic Development Authority said it wants to have a planned operator of its ice rink complex working “cooperatively with other regional ice rink facilities and owners to strengthen regional youth hockey and skating programs and be a more attractive site for youth hockey tournaments, figure skating and other ice related events/competitions and family fun.”

The county is finalizing plans with the unnamed planned operator who would manage the complex. A deal could be completed in the next week or so.

Chesterfield would build the complex and would lease it to the operator through a lease-to-own agreement, McLaren said.

The announcement of plans for the ice rink comes a week after Chesterfield bought the shopping center’s 42 acres for $16 million from Chicago-based Bond Cos., which bought the center in 2015.

The property is undergoing review to be rezoned to allow for the mixed-used project.

The rezoning and lease termination process could take several months.

The plan is to start demolishing the buildings next spring so the property would be ready for construction in the summer, McLaren said. The restaurants along Midlothian Turnpike in front of the property, such as Panera Bread, Carena’s Jamaican Grille and Chipotle Mexican Grill, would remain.

The proposed mixed-use project would be completed in phases.

The first phase includes 275 to 300 apartments, about 100,000 square feet of office space, the ice rink complex and common outdoor space. Walking and biking trails would be added and a new road would be built to connect the development to the Boulders office complex.

Spring Rock Green, which opened in 1976 as Beaufont Mall, was once home to some of the region’s then-popular chains including catalog showroom retailer Best Products, Peaches Records & Tapes, and Jefferson Ward discount store (which later became a Builders Square).

The shopping center was across Midlothian Turnpike from Cloverleaf Mall, a regional enclosed shopping mall that opened in 1972 but closed in 2008. Chesterfield acquired the mall and 37 adjacent acres in a series of deals in 2004 and bought the remaining 46 acres in 2008.

In January 2007, Crosland LLC, a Charlotte, N.C.-based developer, agreed to buy the entire property from the county and build what is now called Stonebridge.

A 123,600-square-foot Kroger Marketplace grocery store, which anchors the development, opened in 2012. Since Kroger opened, Stonebridge has attracted other retailers, including Krispy Kreme; a 600-unit apartment complex; and a 50,000-square-foot Richmond Volleyball Club center.

The pandemic certainly has changed the workplace.

Building your credit: Myths and reality

Also, check out more of this week's best personal finance tips from experts, including a look at what's new for Medicare open enrollment.

Kiplinger's Personal Finance: Don't get hung up on a savings number

Commercial Mortgages: Real estate developers have plenty to worry about with the current economy

A 100,000-square-foot ice facility and sports entertainment complex is planned on the site of the Spring Rock Green shopping center at Midlothian Turnpike (road on left) and Chippenham Parkway (bottom of map).

Former catalog retailer Best Products once operated in this building in the center.