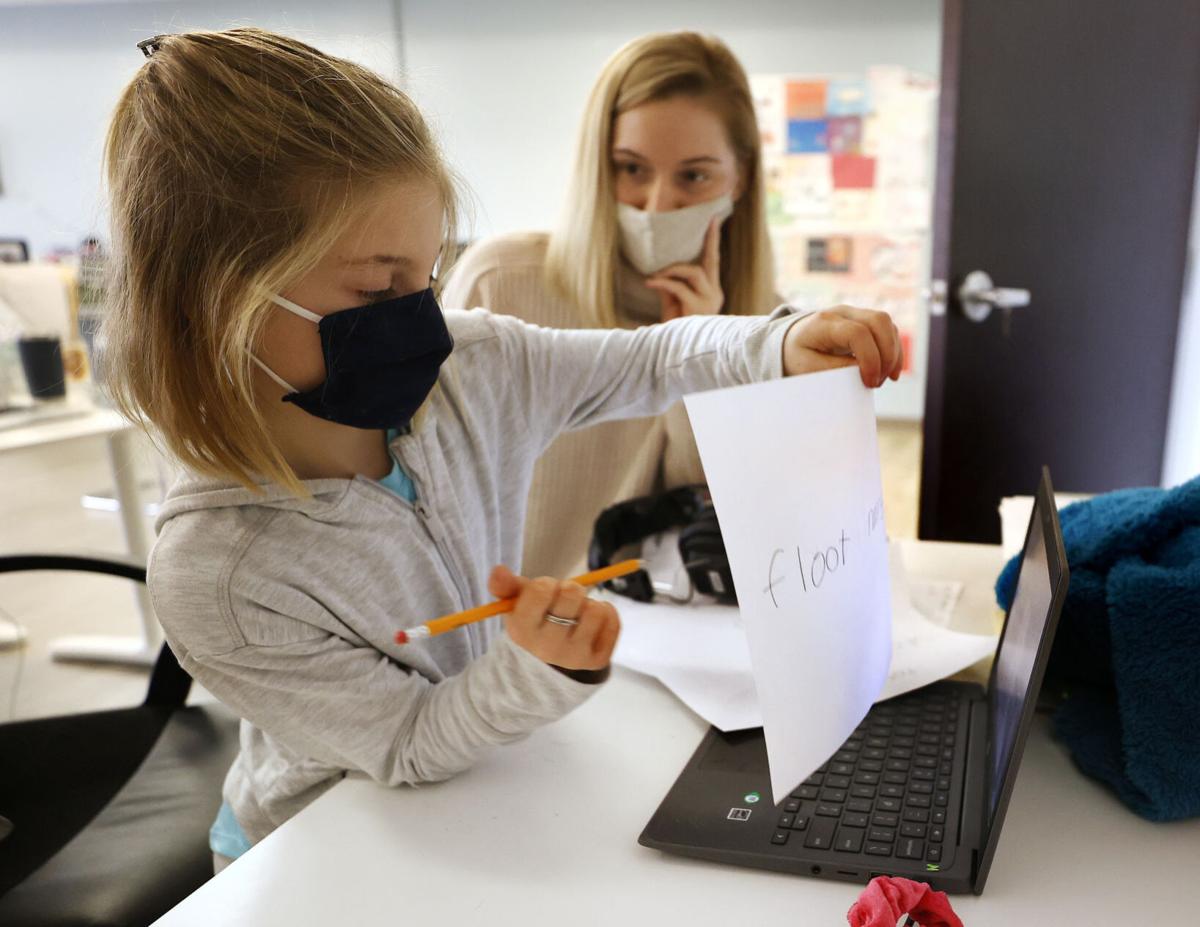 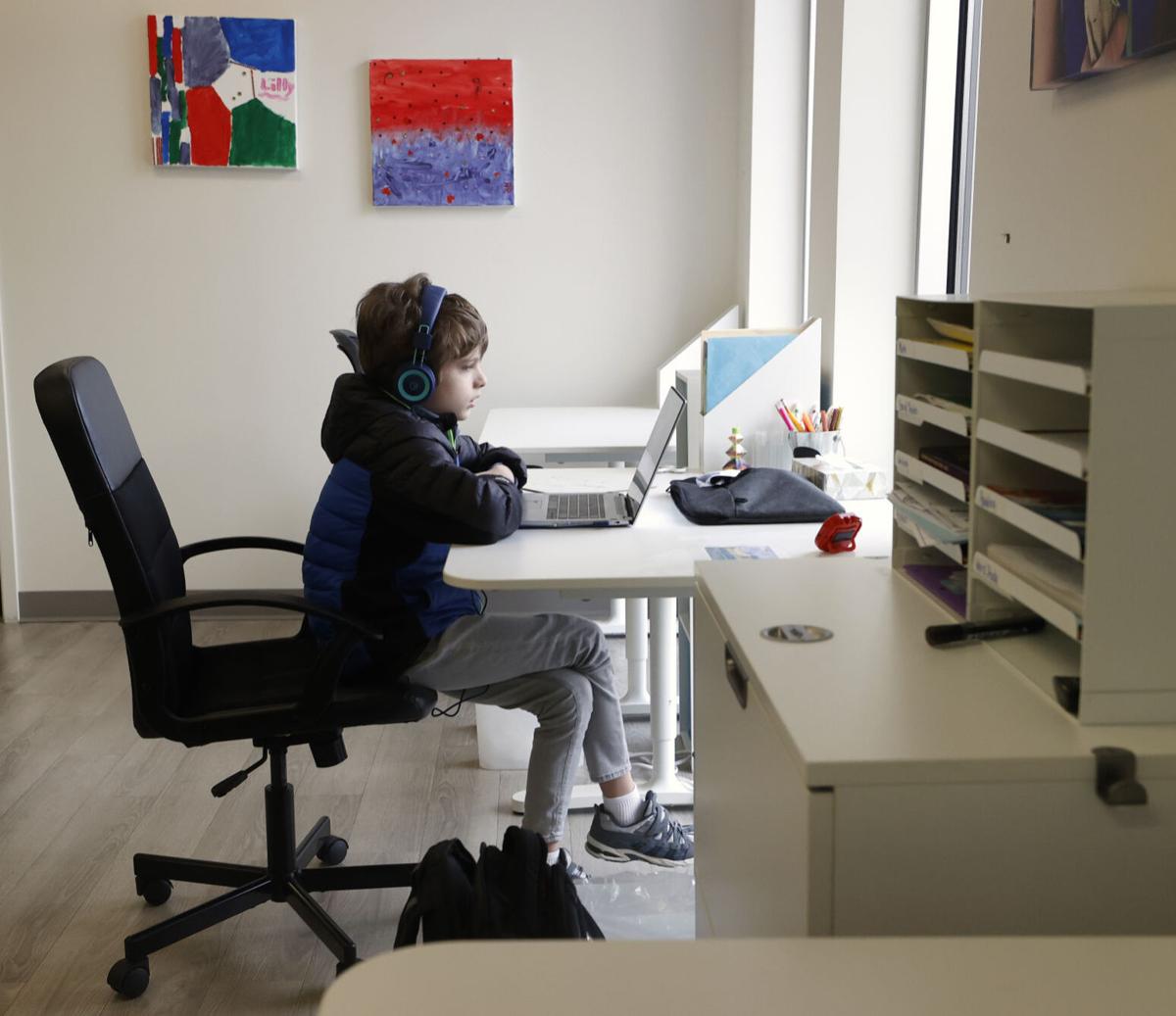 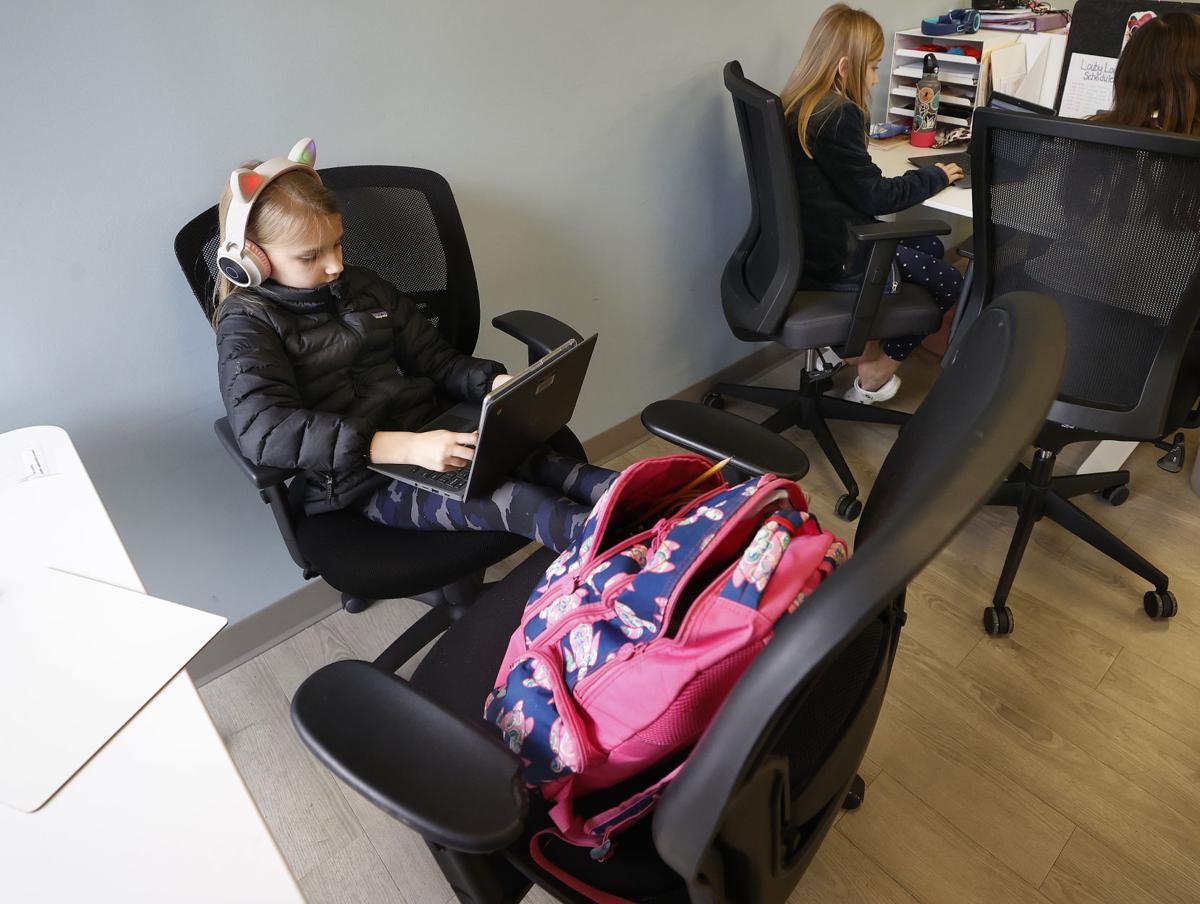 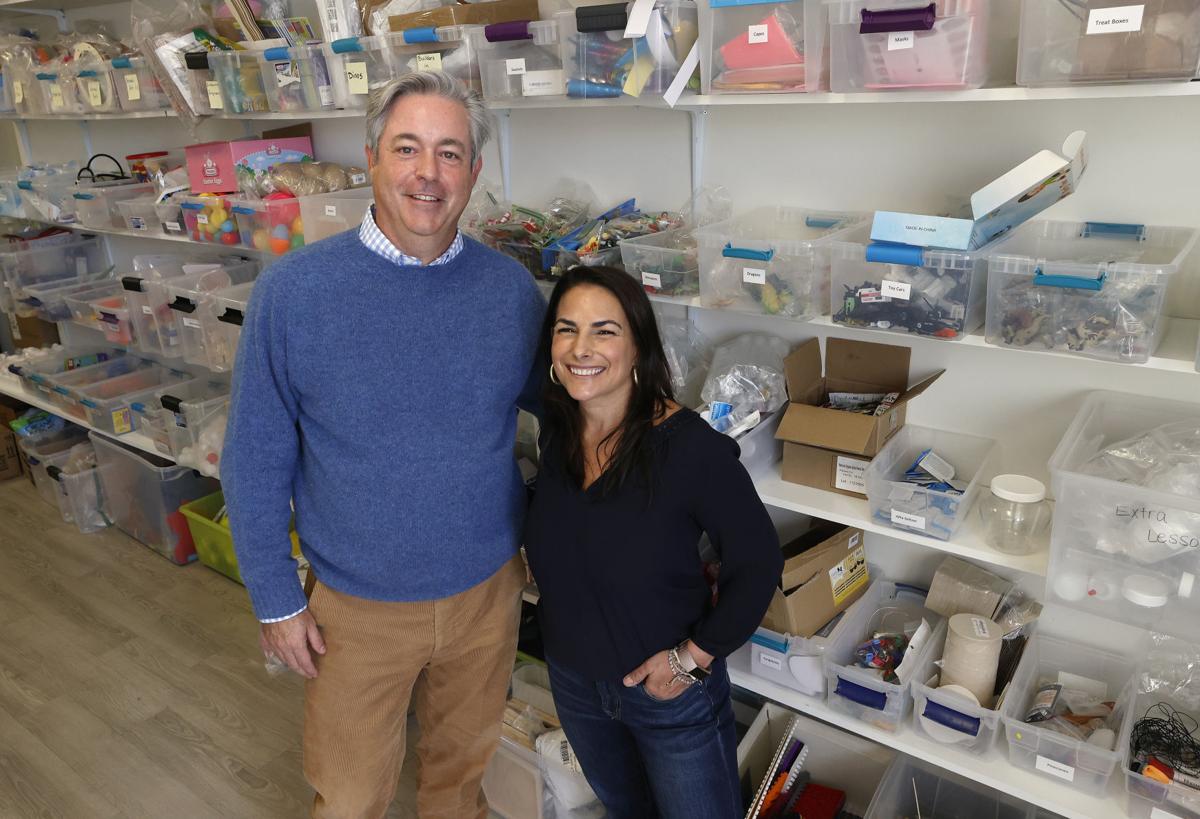 Little Scholars, co-founded by Rodney and Stephanie Jefferson, had to cut back on its local office staff during the pandemic. 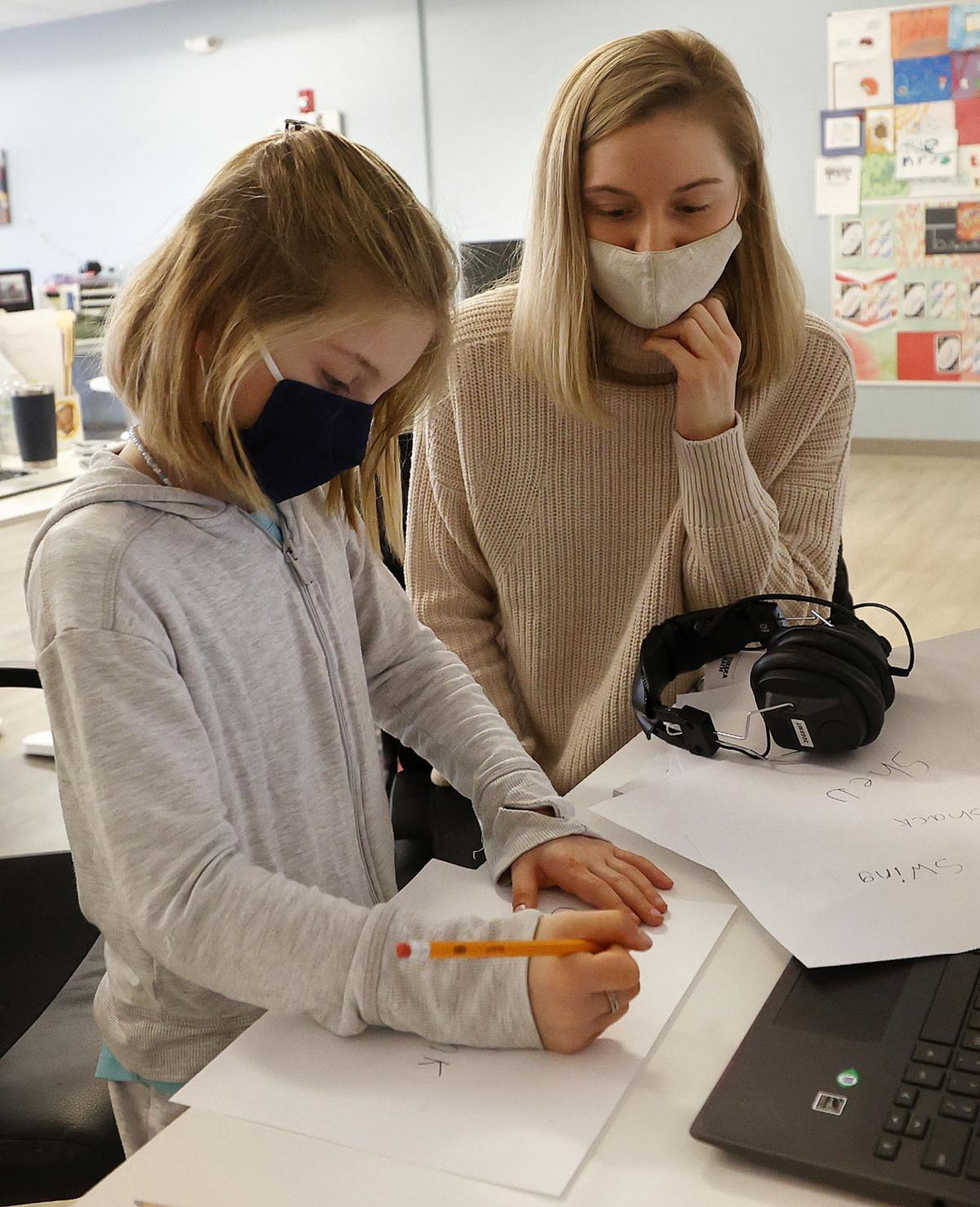 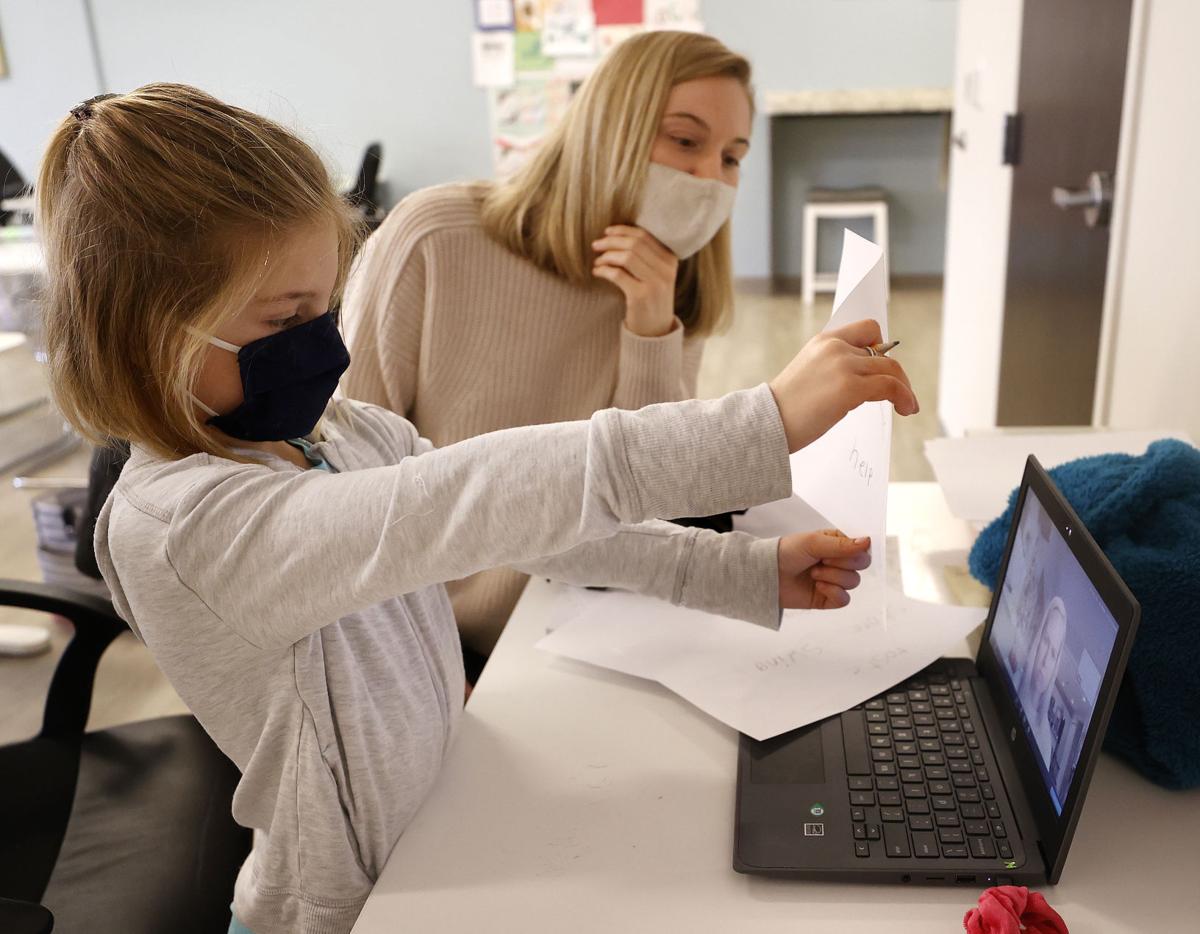 Teacher Kakie Patterson watches as Blair Wick shows the word she spelled to her school teacher during a virtual class Fri., Jan. 8, 2020. Patterson was helping her in the Little Scholars Learning Lab. 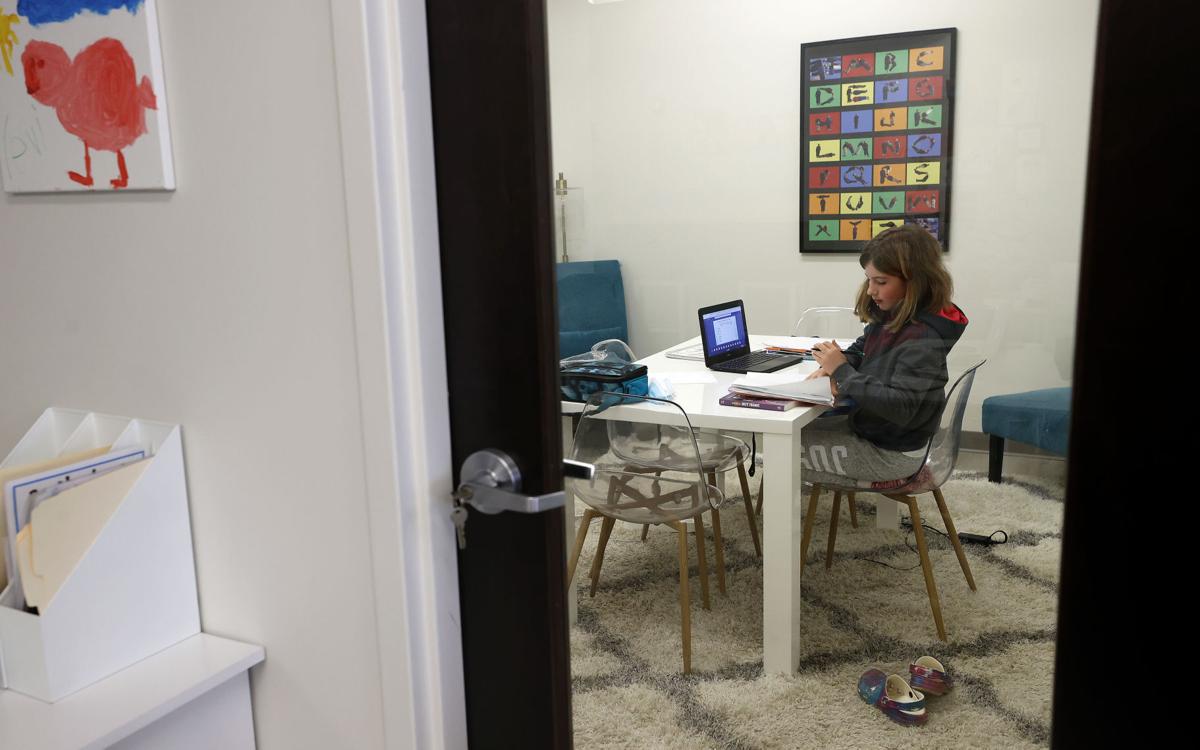 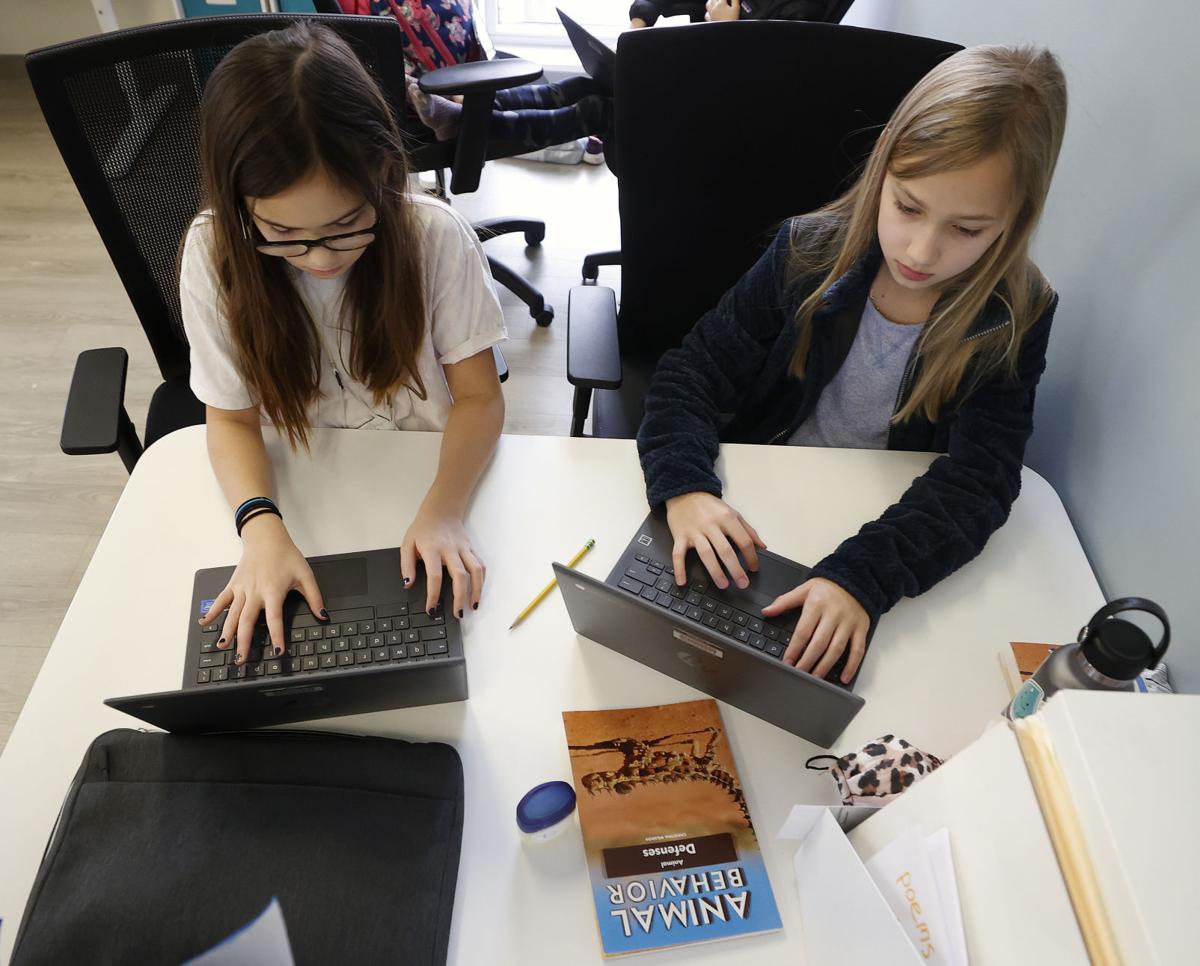 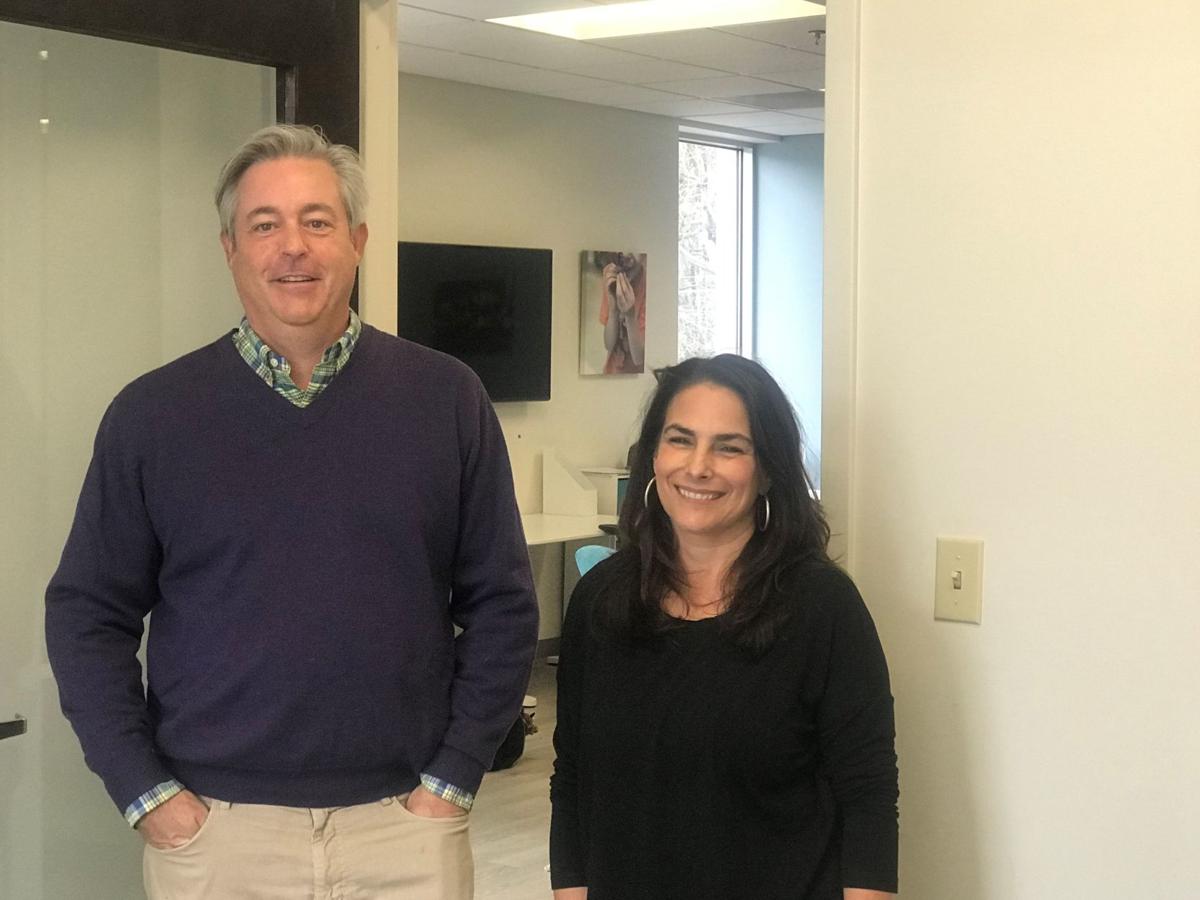 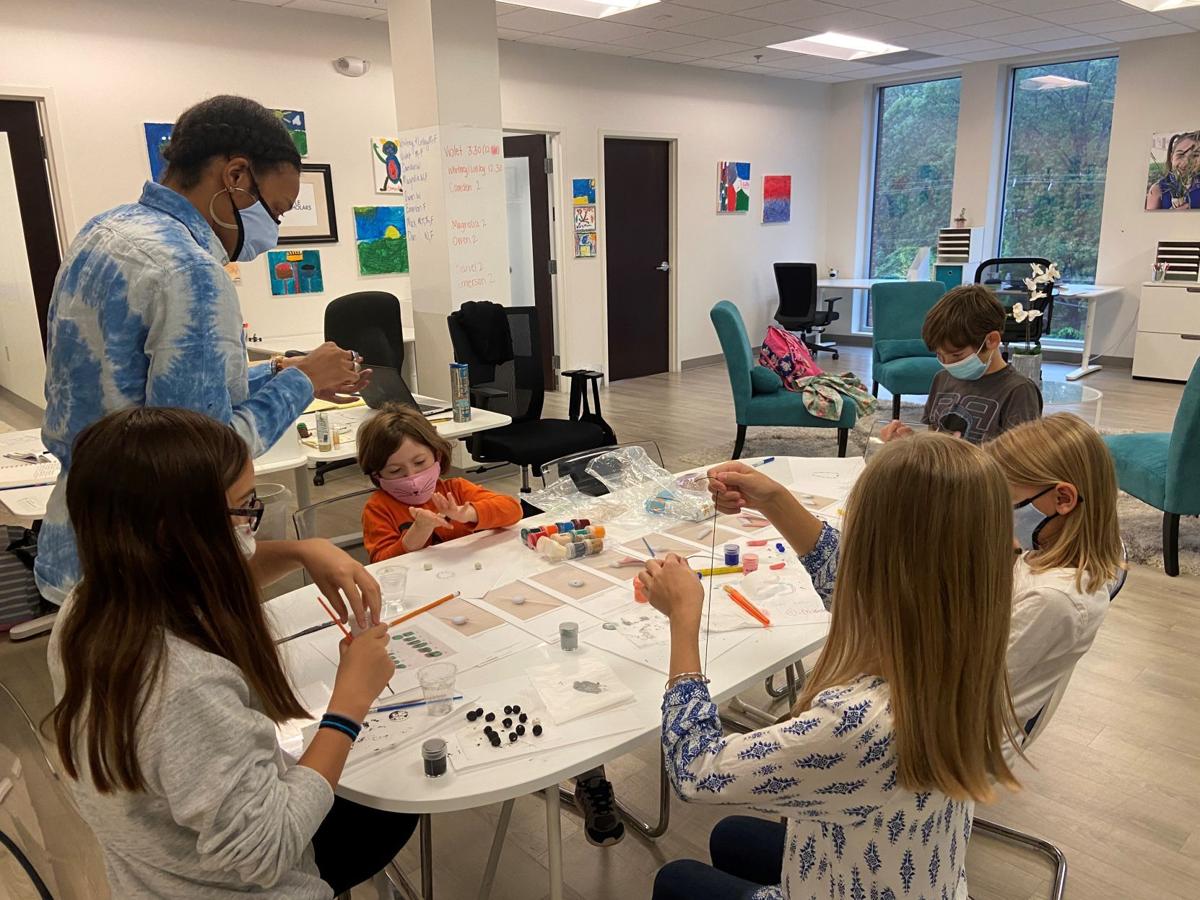 Stephanie Jefferson and her husband, Rodney, founded Little Scholars LLC as a startup 14 years ago and nurtured it into a company that provides tutoring services along with after-school and summer academic enrichment programs with a presence in 18 states.

When the COVID-19 pandemic hit, forcing schools to close and disrupting the traditional, in-person model of education, they had to do some pivoting.

“In a way I do feel like kind of a startup again,” Stephanie Jefferson said. “Literally everything we knew in January [2020] kind of changed in a week. We really had to think hard about how to recreate our business.”

“In that sense, I do feel like we have completely started over and done things we had never thought about before,” she said. “It was a good brain exercise on ways we could pivot.”

With an office on Willow Lawn Drive in Henrico County, Little Scholars provides academic support for children in kindergarten through 12th grade. The company also contracts with schools in multiple states to provide after-school and summer enrichment programs.

Many tutoring services along with schools have shifted to an entirely online teaching model to avoid personal contact during the pandemic. Little Scholars has adopted virtual services during the pandemic, but it also has worked to maintain some in-person services.

One of the biggest changes was to convert much of its office space on Willow Lawn Drive into a Learning Lab — configured to meet social distancing guidelines — where students can attend school virtually and get in-person help from Little Scholars’ own teachers. The company has worked with civic organizations and country clubs to set up learning labs.

“We had to pivot and be creative to add value for our customers,” Rodney Jefferson said.

“We do have several schools that we are working with that only do virtual programs,” Stephanie Jefferson said. “But I think the kids are really craving — and the families are craving — some in-person interaction.”

The company also is offering a service in which its teachers will help actively manage a child’s virtual schooling schedule. That includes working with children to ensure they complete assignments, while also providing academic tutoring and enrichment activities.

After many schools canceled summer programs in 2020, Little Scholars also offered its own enrichment summer camps.

“One of the things that came out of COVID was that families started contracting with us to come in and do programs either in their neighborhood or their backyard,” Stephanie Jefferson said. “We call them backyard camps. We have been doing those since the beginning of June. Families can pick the materials and the number of hours our teachers need to be there, day by day.”

The origin of Little Scholars as a business goes back to 2006 when Stephanie Jefferson started tutoring on her own child. She had worked as a school teacher, but after having her son, she decided to stay home with him.

“I also had a friend who approached me about working with her son as a tutor,” she said.

“Long story short, my son’s preschool then asked me if I would start coming in and doing classes with the preschool students,” she said. “A couple of other schools caught wind of that and asked me, and I kept expanding.”

Stephanie Jefferson started hiring other teachers to join her business in 2009. “Three children later, and Little Scholars is really doing more than I could possibly do,” she said.

Rodney Jefferson, the company’s CEO, has a master’s degree in business and a professional background working in several different businesses such as commercial printing and then debt recovery. He co-founded Little Scholars with Stephanie in 2006 and joined full time in 2010 to manage the business side.

Stephanie Jefferson, the president of Little Scholars who has a master’s in education, oversees educational content.

“In 2010, I considered several options, including buying a business, but then I thought, ‘I’ll help Stephanie grow Little Scholars.’ At the time, she was growing the business from the dining room table,” he said.

The company now has a network of about 600 teachers in multiple states who provide tutoring and enrichment services.

Tim and Emily Rose of Richmond have four daughters, two of whom — fourth-grader Linley and second-grader Whitney — are at Mary Munford Elementary School in Richmond virtually but are also participating in the Little Scholars program.

“What Stephanie and Little Scholars did was develop a program where they have teachers at their facility to help them do virtual learning,” Tim Rose said. “Our kids really enjoy Stephanie, and they enjoy the teachers that are there. It has really been a savior for my wife and me.”

Sarah Wootton of Richmond said she and her husband, Madison, have had three children enrolled to work with variety of teachers from Little Scholars for academic enrichment for years.

“The tutors have helped our kids build their confidence in themselves and their academics,” Wootton said. “And they have helped my husband and me understand how each of our kids learn best.”

One teacher, for example, helped them realize that one of their children is a tactile learner who responded well to learning how to spell words with different sized letters that had various textures because he could touch and move them around.

“Given how helpful it can be to work in person with a tutor to help learn concepts, it may seem that tutoring would not translate to the virtual world of the current pandemic,” Wootton said. “But, since March, one of my children has met virtually with a Little Scholars tutor on an as-needed basis. Instead of sitting at our dining room table, they meet by Zoom and are able to use technology instead of pencil and paper. Despite the use of screens instead of meeting in person, the tutor has been a helpful resource and the transition to virtual meetings has been seamless.”

Stephanie Jefferson said she thinks some of the changes in education fueled by the pandemic are here to stay — for instance, the use of virtual tutoring. But she also thinks the in-person model will come back strong, along with programs such as enrichment camps that groups of families can organize.

Even with the adjustments Little Scholars has made, the pandemic has been difficult for the business and everyone in education, Stephanie Jefferson said. The company had to cut back on its local office staff.

“Quite frankly, I loved everybody on our team, and it was hard for us to make the decision to do that,” she said.

“As far as our teachers, we have a really strong teacher community,” she said.

“I don’t think anyone appreciates how hard this [pandemic] has been for teachers,” she said. “This is not something they teach in teacher training — how to be a virtual teacher.”

Rodney said he expects to see a surge in demand this year for summer enrichment programs as schools are able to reopen.

“I think that will be good our business, as well as parents,” he said.

Having built a business from a startup, Stephanie Jefferson said anyone doing that should “be prepared to work harder than they have ever worked before.”

“There is so much to do in a day that you must focus on what is important,” she said, adding that she and other staff members each set two priorities to accomplish at the beginning of each day.

“It helps get past the clutter and makes us more efficient,” she said. “It also creates a culture of accountability and teamwork.”

Little Scholars, co-founded by Rodney and Stephanie Jefferson, had to cut back on its local office staff during the pandemic.

Teacher Kakie Patterson watches as Blair Wick shows the word she spelled to her school teacher during a virtual class Fri., Jan. 8, 2020. Patterson was helping her in the Little Scholars Learning Lab.