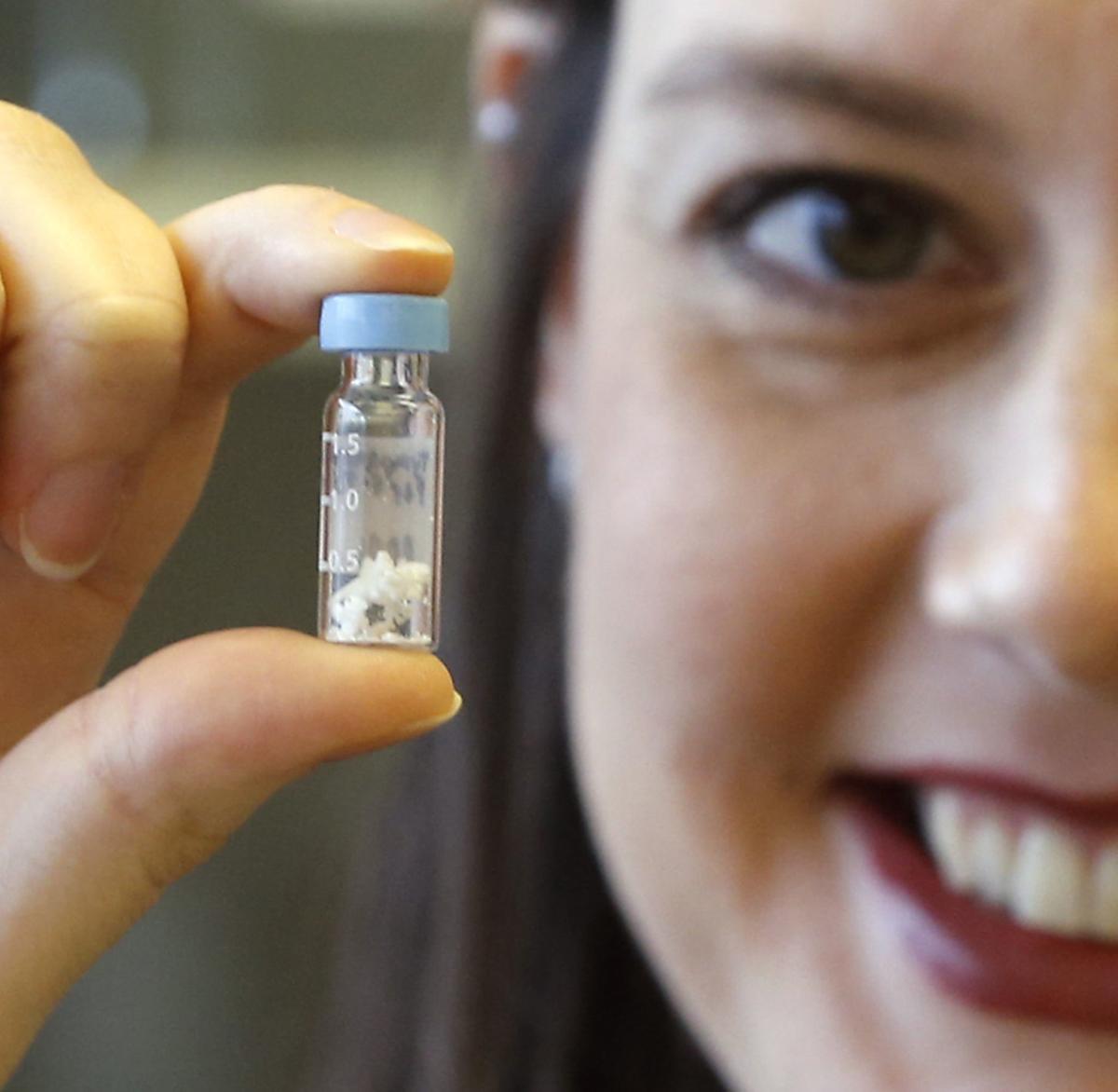 Elaine Horn-Ranney holds a sample of a gel, Perf-Fix which the company is testing for use in eardrum repair surgery. 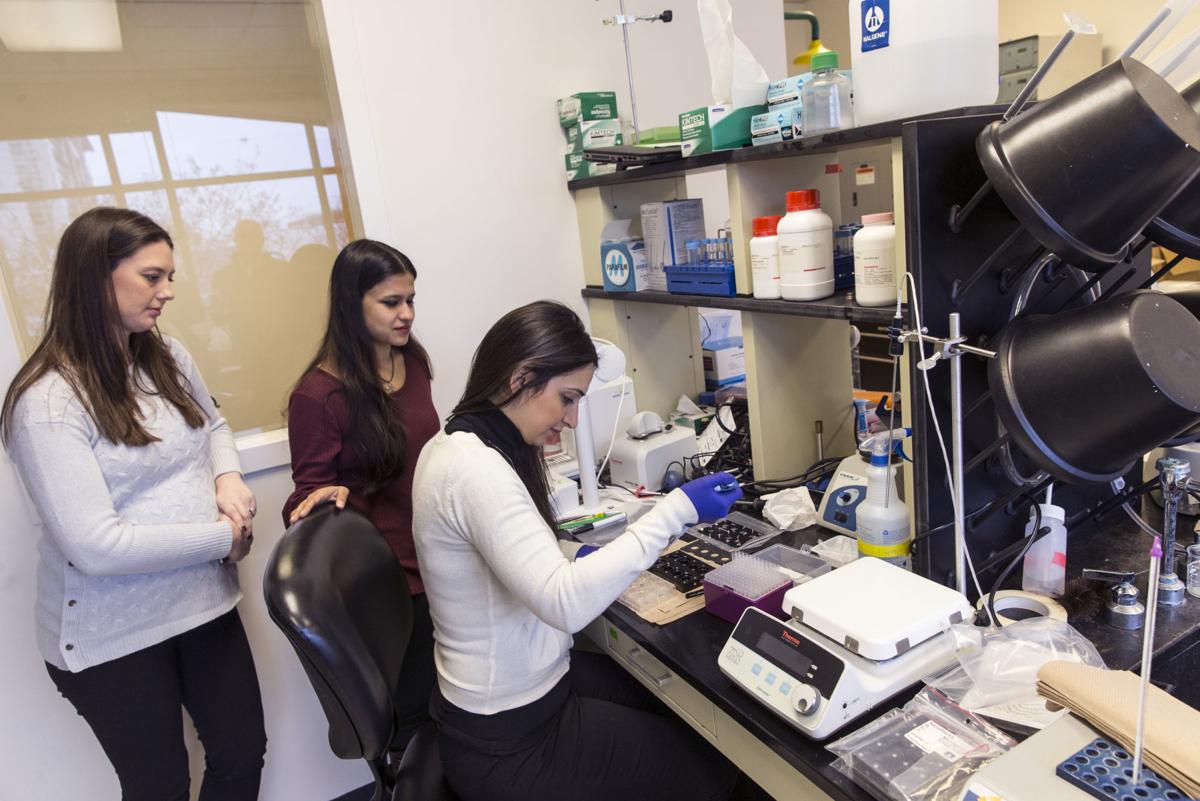 Parastoo Khoshakhlagh (right) looks at hydrogel samples that were tested on the space station as Elaine Horn-Ranney (left) and Sithara Nair observe in Tympanogen’s laboratory at the Virginia Bio+Tech Park in Richmond. 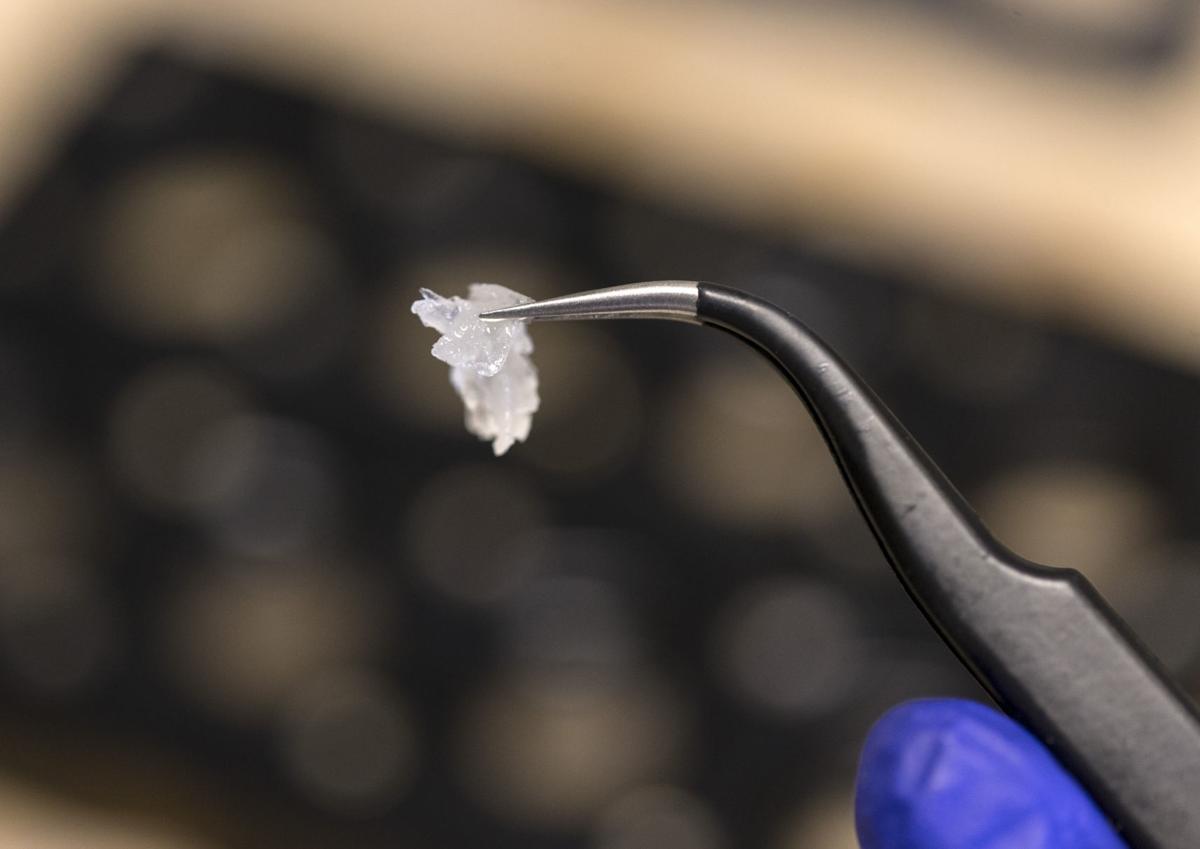 A sample of a hydrogel developed by the biotechnology company Tympanogen. The company, based in the Virginia Bio + Tech Park in Richmond, is testing its gel technology for eardrum repair and wound treatments. This sample was tested on board the International Space Station.

A package that recently arrived at the startup company Tympanogen contained a precious cargo that had traveled a long, long distance. Inside were samples of the company’s polymer hydrogels, which had traveled from Earth to space and back again.

In December, the gels — small disc-like structures about the consistency of rubber cement — were blasted into outer space on a SpaceX rocket and spent more than a month on the International Space Station.

In Tympanogen’s laboratory in the Virginia Bio+Tech Park in downtown Richmond, company co-founder Parastoo Khoshakhlagh carefully removed the gels from a container for further testing. Tympanogen is studying its proprietary hydrogels for medical applications.

“We’re pretty excited to be touching something that astronauts touched,” she said.

The company has developed a type of gel called Per-Fix designed to help with repair of perforated eardrums. The gel is designed to help facilitate natural healing and reduce the need for complicated and expensive surgeries. The company plans to seek FDA approval for that application.

“We have ear, nose and throat surgeons who have volunteered to do the trials,” said Tympanogen co-founder and CEO Elaine Horn-Ranney.

Because it has antimicrobial properties, Tympanogen’s hydrogel also might be useful for wound dressings. It could release medications and reduce infections in military and civilian applications, as well as in space travel.

The experiment on the space station was designed to test how the gels form in micro-gravity compared with gravity on Earth.

“Nobody has done this type of study before,” Khoshakhlagh said.

Khoshakhlagh and Horn-Ranney co-founded Tympanogen as graduate students at Tulane University, where they both received doctorates in biomedical engineering.

Horn-Ranney said she did a lot of basic research on hydrogels, but the practical applications of her work were unclear until her husband, Jesse Ranney, a medical doctor, suggested it could be useful for eardrum repair.

“We were working on different types of hydrogels, and we were both thinking about how we could use that to help patients in health care settings,” Khoshakhlagh said.

The partners worked to develop a prototype, and Tulane helped them apply for a patent and provided a grant to do some initial testing. After forming Tympanogen, the founders also participated in business pitch competitions to raise capital for the new company.

Horn-Ranney and her husband moved to Virginia when he did his residency in pediatrics at Eastern Virginia Medical School, and the couple settled in Williamsburg when he got a job at Sentara Williamsburg Regional Hospital.

“The company moved with me,” said Horn-Ranney, who started looking for laboratory space. “I looked at several places in Richmond,” she said, but the Virginia Bio+Tech Park was the best location.

“Just being able to have a dedicated area with wet lab space that we can lease and a bunch of other startup companies around us is good for us,” she said.

Tympanogen is a model type of startup company that the Bio+Tech Park seeks to recruit, said Carrie Roth, president and CEO of the park.

“We look for companies that have tremendous opportunity for growth and that are solving real-world problems,” she said. “It is exciting to have this first-of-its-kind experimentation into space be from an RVA-based company.”

Joining the company in Richmond was Sithara Nair, who received a doctorate in chemical engineering from Virginia Commonwealth University.

“This sort of work is right up my alley,” said Nair, whose background includes designing and evaluating polymers for specialized clinical applications. She is now conducting research for Tympanogen.

More tests are needed to determine the outcome of the experiments on the space station, but the initial results indicate that the gels do form differently in micro-gravity than on Earth.

“The hypothesis was the gels would form more ordered structures,” Horn-Ranney said. “If I could go back in time and tell my 12-year-old self that some day I would launch something to the International Space Station, I would not believe it.”

Even during the COVID-19 economic downturn, some small business owners say they struggle to find workers

Businessman David Bender says his lawn care service has come through the COVID-19 pandemic so far in pretty good shape, if only he could find …

Elaine Horn-Ranney holds a sample of a gel, Perf-Fix which the company is testing for use in eardrum repair surgery.

Parastoo Khoshakhlagh (right) looks at hydrogel samples that were tested on the space station as Elaine Horn-Ranney (left) and Sithara Nair observe in Tympanogen’s laboratory at the Virginia Bio+Tech Park in Richmond.

A sample of a hydrogel developed by the biotechnology company Tympanogen. The company, based in the Virginia Bio + Tech Park in Richmond, is testing its gel technology for eardrum repair and wound treatments. This sample was tested on board the International Space Station.