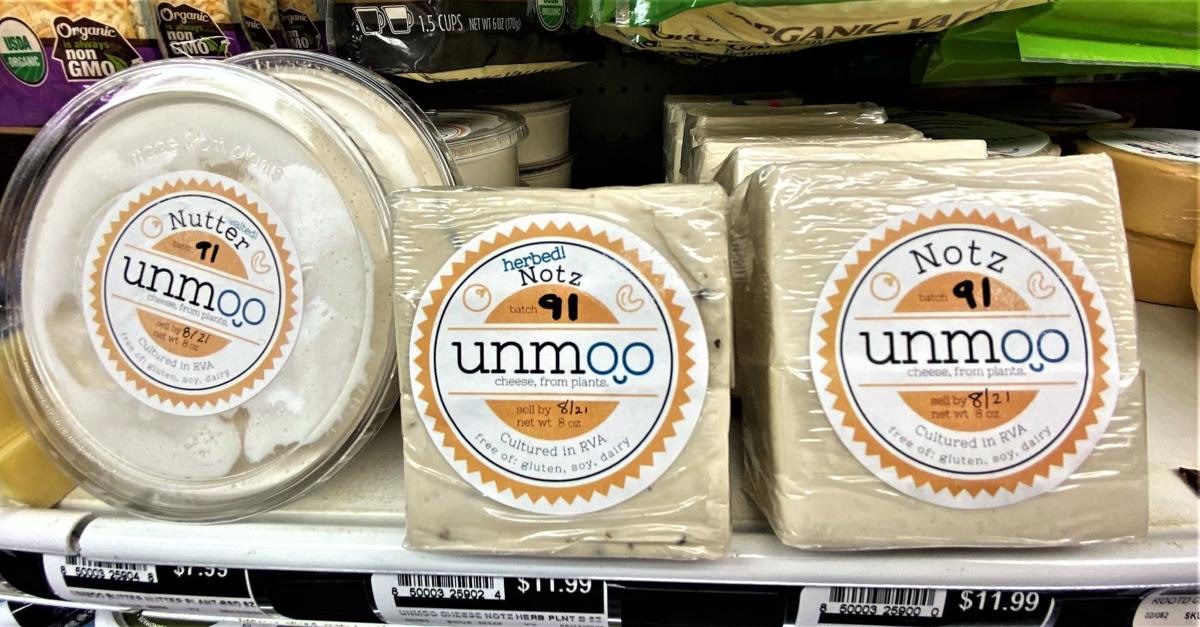 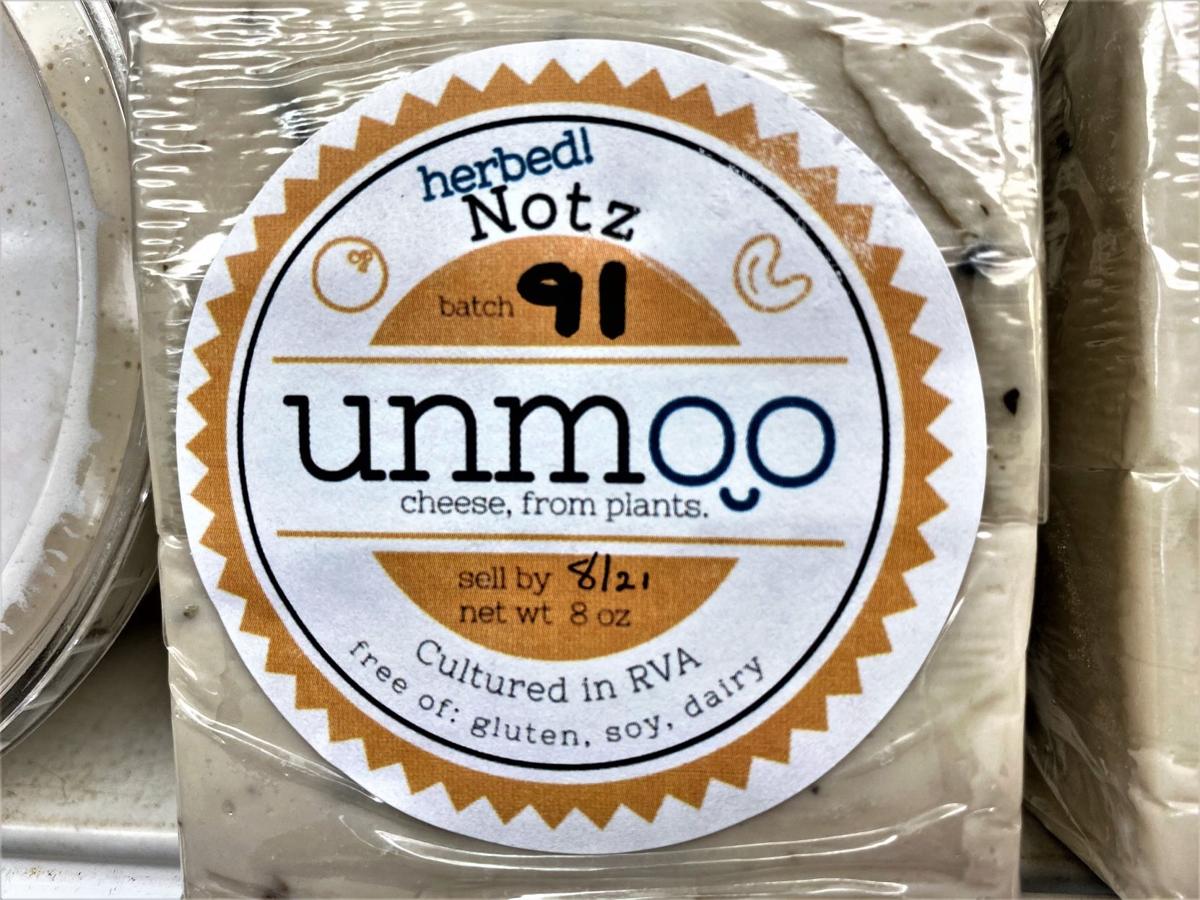 Richmond-based startup UnMoo makes and sells plant-based cheese and butter that are free of soy, dairy, gluten and cholesterol. UnMoo makes Notz, a cultured, cashew-based cheese that melts like mozzarella. The item was on the shelf at Good Foods Grocery in South Richmond.

A Richmond-based startup has created the product that vegans have been waiting for — a plant-based cheese that actually melts.

He began making cheese in his home kitchen during the summer of 2017 in an effort to save money during his weekly trips to the South of the James Farmers Market.

When his boyfriend began spending more and more of their farmers market budget on goat cheese, Kadrich decided to start making cheese himself.

“His little goat cheese habit at the farmers market got me interested in treating our kitchen like a lab, so I figured out how to make soft cheeses,” said Kadrich, who studied microbiology. “And I got jealous.”

Kadrich couldn’t eat the homemade cheese he was making, so he began researching dairy-free alternatives.

“With a little bit of online research, I found that there were some folks out there making vegan cheese with cashews and I started playing around,” he said. “That was the start of what led to UnMoo.”

After 18 months, Kadrich perfected his recipe for Notz, a cultured, cashew-based cheese that melts like mozzarella.

“I spent my evenings falling asleep reading academic journals. I learned everything there was to know about these ingredients,” he said. “When I was just making cheese for my boyfriend, it did not melt. It was tasty, but it was a cheese substitute by all means.”

After months of studying and testing, Kadrich developed a recipe that achieved the coveted “cheese pull,” like dairy-based cheese.

UnMoo’s cheesemaking process is similar to traditional dairy processing methods. Kaldrich says this is what sets UnMoo’s products apart from other dairy-free cheeses.

“Once we produce our creams from the nuts, we treat them very much the same way as an artisan cheesemaker would, in that we culture them to the proper flavor and aroma and then age them to maturity so that they don’t taste like nutritional yeast or lemon juice like most vegan cheeses do,” he said.

UnMoo also sells Nutter, a cultured, European-style butter and a variety of seasonal products, like Habby Jak, which is a dairy-free version of jalapeño jack cheese with fresh local peppers and rosemary.

The products are sold on UnMoo’s website and by local retailers, including Good Foods Grocery and Ellwood Thompson’s Local Market.

Several local restaurants top their vegan pizza with Notz, including The Hop Craft Pizza & Beer on West Cary Street in the Fan District, Pizza Bones RVA on Jefferson Avenue in Church Hill, Hot for Pizza on West Leigh Street in Carver, and Pupatella on North Morris Street in the Fan.

One of Kaldrich’s goals is for UnMoo to be a “social and environmental justice-focused company.”

The company pays its four employees a living wage of at least $15 an hour.

All of the products’ packaging is home-compostable, down to the adhesive on the labels.

“When we switched from plastic packaging to home-compostable packaging and became 96% zero waste with physical materials was a really big moment for me,” Kadrich said. “The thought that I could produce a product and send it to people and there would be nothing left of the packaging in 60 days was insanely rewarding.”

UnMoo’s cashews are organic, fairly traded and from ethical supply chains, he said.

“We’ve vetted every ingredient that we use and make sure that the farmers and processors are all being treated well and being observed by third-party bodies to ensure that there’s no worker exploitation or land exploitation,” he said.

Over the next few months, Kadrich plans to expand UnMoo throughout the Mid-Atlantic region.

Richmond-based startup UnMoo makes and sells plant-based cheese and butter that are free of soy, dairy, gluten and cholesterol. UnMoo makes Notz, a cultured, cashew-based cheese that melts like mozzarella. The item was on the shelf at Good Foods Grocery in South Richmond.