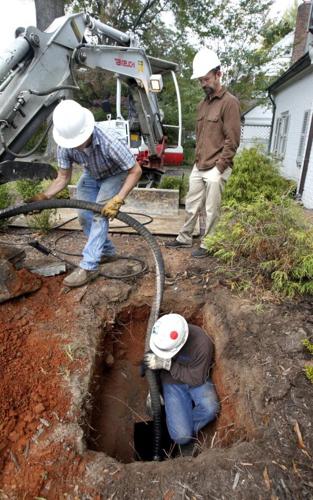 Jason Flippo (right) of James River Environmental Inc. oversees the cleaning and filling of an underground heating oil tank in the 5400 block of Cary Street. Tim Evans (left) of Tim Evans, Inc. helps with a vacuum hose as James Barden of Atlantic Industrial Services Inc. power washes and vacuums the inside of the 1000-gallon tank. After the tank was cleaned, it was filled with concrete slur. 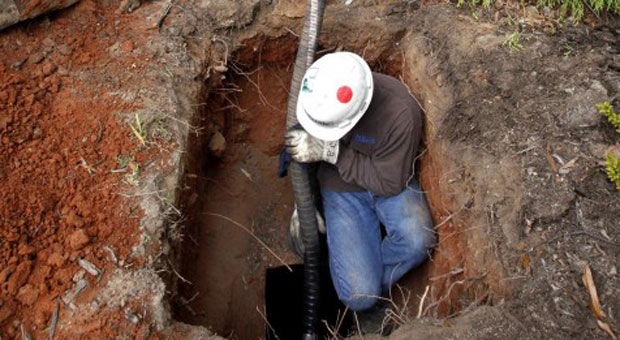 Cleaning and filling of an underground heating oil tank in the 5400 block of Cary Street.

When Bryce and Nancy Bugg of Richmond wanted to sell the family farm that she inherited about six years ago in Orange County, the Realtor told them they needed to remove two huge underground storage tanks — one for gas, the other for diesel.

"That's when the cold chill went down my leg," Bryce Bugg recalled.

"We didn't want to run afoul of the EPA (Environmental Protection Agency) or stir up a hornet's nest. But I thought, 'Oh my gosh, there goes thousands of dollars to get rid of those tanks.' "

The problem wasn't as bad — or as costly — as they thought it would be.

Virginia has a state cleanup fund to deal with leaking oil tanks. It covers the costs for home heating oil tanks as well as EPA- and state-regulated gas station fuel tanks and anything between.

"It's a very civilized way to deal with underground storage tanks," Bugg said.

Property owners are reimbursed through the Virginia Underground Petroleum Storage Tank Fund for expenses related to cleaning up spills caused by corroded, punctured or malfunctioning tanks.

The Virginia Department of Environmental Quality won't disburse funds to redo the landscaping or a patio that was torn up to clean up a leaking tank, nor will it pay for the removal of a heating oil tank if a homeowner switches to propane or a heat pump.

But it will pay for environmental remediation and most or part of the costs, depending on the contamination level.

"Every state fund is different," said Marybeth Glaser, a reimbursement team coordinator with the DEQ. "What I do know is not all states cover home heating oil tanks. Virginia is one of a few states, and that is what makes this state unique."

During the past 10 years, the fund has reimbursed $84.4 million to clean up 8,648 heating oil sites in Virginia. The deductible cost for the homeowner is $500. The average cleanup cost is $9,756. Glaser said.

JoAnn Ross of Richmond is dealing with the remediation of soil and groundwater pollution from a leaking underground oil tank that was removed from the yard of her late mother's house in New Jersey.

It has taken three years and numerous rounds with the insurance company.

"It's crazy how expensive it is," she said.

The cost for remediation is tens of thousands of dollars, which the insurance company finally agreed to pay. But it doesn't include the cost for an attorney hired by Ross to deal with the situation.

One option was to put the house up on stilts to excavate and remove contaminated soil and water under the house.

Ross chose in situ bioremediation, which involves installing temporary vertical treatment wells in the basement and around the perimeter of the house and injecting a biodegradable chemical to clean the contamination.

Heating oil tanks typically function for years — decades — without leaking. However, tank removal or closing a tank often is a condition of a sale.

"What happens is I get a call from a real estate agent or a homeowner about an abandoned tank," said Jason Flippo, owner of James River Environmental Inc. in New Kent County and one of about 18 consultants in the Richmond area listed on the DEQ site who do environmental work in Virginia.

"I do a soil sample and find out whether it is contaminated and, if it is, the state will get involved."

If no contamination is found, the property owner is responsible for all costs. The cost to pump out a tank and fill it with a cement sludge or remove it is typically $950 to $1,350, Flippo said.

If the contamination is contained and not extensive, the state fund would pay for the soil sample, the report, and pumping and cleaning out the tank, but not filling the tank with sludge or removing it, he said.

If the contamination is more extensive, the state would pick up most of the costs, which usually includes filling or removing the tank, Flippo said.

For rural areas not reliant on a public water system, the state is more flexible in the costs it will pick up, because well and ground water could become contaminated, he said.

There are an estimated 400,000 underground and above-ground tanks in Virginia.

The state fund went into effect in 1987 to deal with EPA-regulated tanks — mostly gasoline tanks at service stations — and the program was expanded to nonregulated heating oil tanks in the early 1990s.

"Unlike many states, Virginia has taken the necessary steps to protect the environment and work in partnership with the industry," said Michael J. O'Connor, president of the Virginia Petroleum, Convenience and Grocery Association.

State law requires that a fee of 6/10ths of 1 cent be assessed on every gallon of gas, diesel and home heating oil sold, he said.

The DEQ administers that fee — about $23 million a year — to address petroleum releases and ensure that the environment is protected, O'Connor said.

Popular in the 1950s, '60s and '70s, underground home heating oil tanks are plentiful in older neighborhoods in the Richmond area.

"Filling them up is our core business," said Jack Woodfin, chief executive office of Woodfin Oil.

Most issues surface when a house comes up for sale and the homeowner has converted to a different heat source, he said. If the oil tank isn't being used, it needs to be addressed, Woodfin said.

Some people convert to a different heat source but keep oil as backup for super cold days, he said. "If the homeowner is using oil heat, it's usually a nonissue, Woodfin said.

In some cases, oil will sit in unused tanks for years.

Closing a home heating oil tank should be done in accordance with local building and fire codes, which may require pumping out the tanks and filling them with inert solid materials or removing the tank, said Russell Ellison with the DEQ.

Ellison said some tanks stay in solid and good condition while others corrode over time, based on the type of tank and soil conditions.

If a tank is in use and shows no evidence of leaking, but a lender or insurer asks that it be removed, the DEQ would not be involved and the homeowner would be responsible, he said.

"The fund is there to assist with cleanups," he said. "It can help with oil cleanups, but it doesn't cover everything."

On a per-share basis, the Richmond-based company said it had a loss of 58 cents.

What's next for Manchester high-rise plan that may block skyline views?

A Richmond councilwoman said more neighborhood feedback is being sought about a proposed Manchester high-rise that some nearby property owners say is out of place and will harm their skyline views.

In a long-running contest for deposits, this round went to Virginia banks

A group of small Virginia banks has blocked the giant Virginia Credit Union from adding a large, prosperous bloc of potential customers to the…

Workers' comp rates in Virginia could be headed down

Workers’ compensation premiums in Virginia could be headed down, good news for employers in a difficult economy that reflects the impact of th…

Your Funds: Break-even isn’t an investment target; don’t focus on it

My friend Mark told me recently that he is excited that the market’s recent rally might get him back to break-even on a stock he wants to sell.

Back-to-school shopping a predictor of how the holiday selling season will fare.

With fears over COVID on the decline, recessionary fears are likely weighing heavily on retailers.

Jason Flippo (right) of James River Environmental Inc. oversees the cleaning and filling of an underground heating oil tank in the 5400 block of Cary Street. Tim Evans (left) of Tim Evans, Inc. helps with a vacuum hose as James Barden of Atlantic Industrial Services Inc. power washes and vacuums the inside of the 1000-gallon tank. After the tank was cleaned, it was filled with concrete slur.

Cleaning and filling of an underground heating oil tank in the 5400 block of Cary Street.