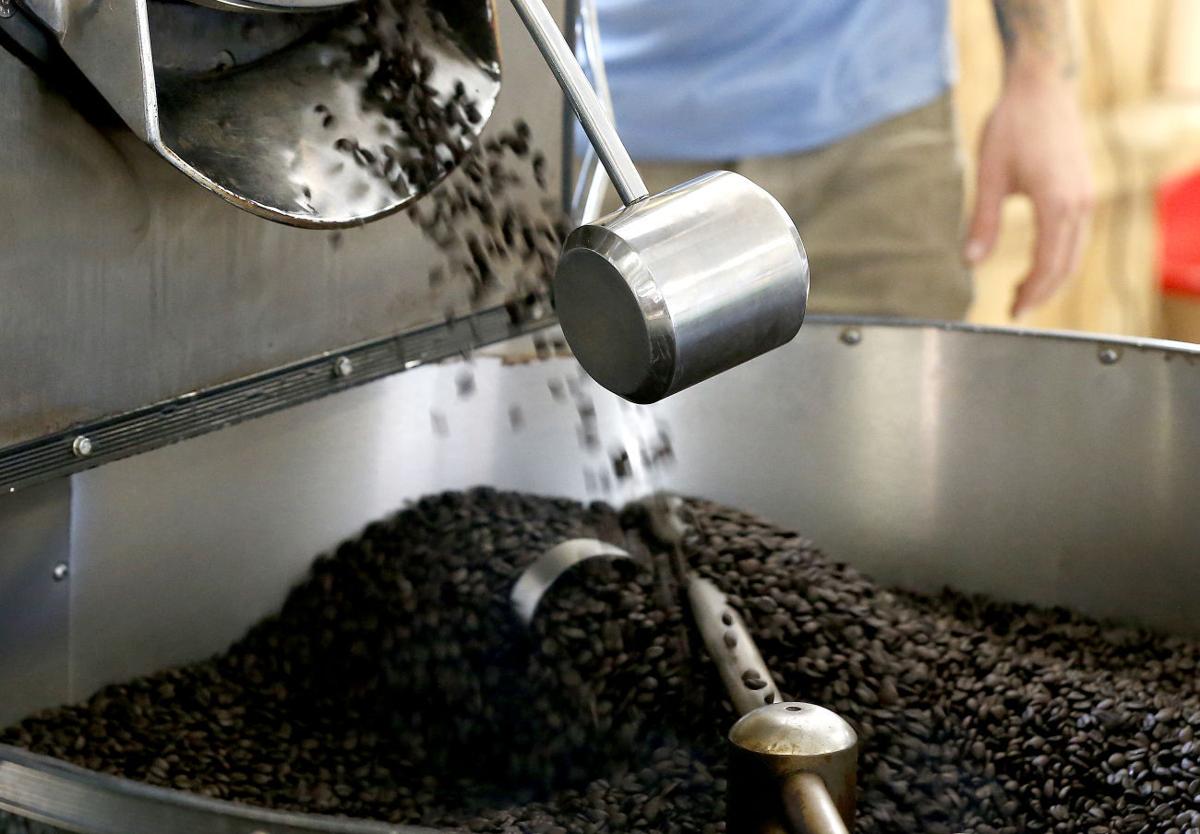 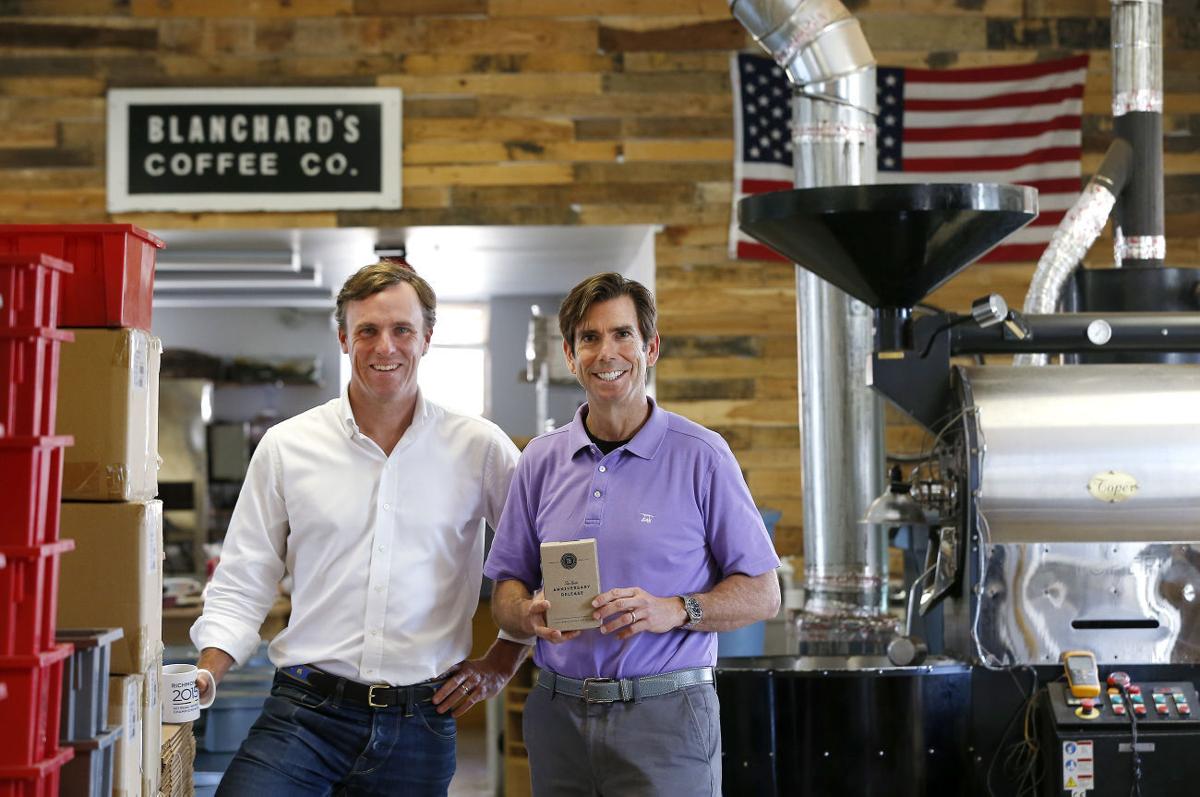 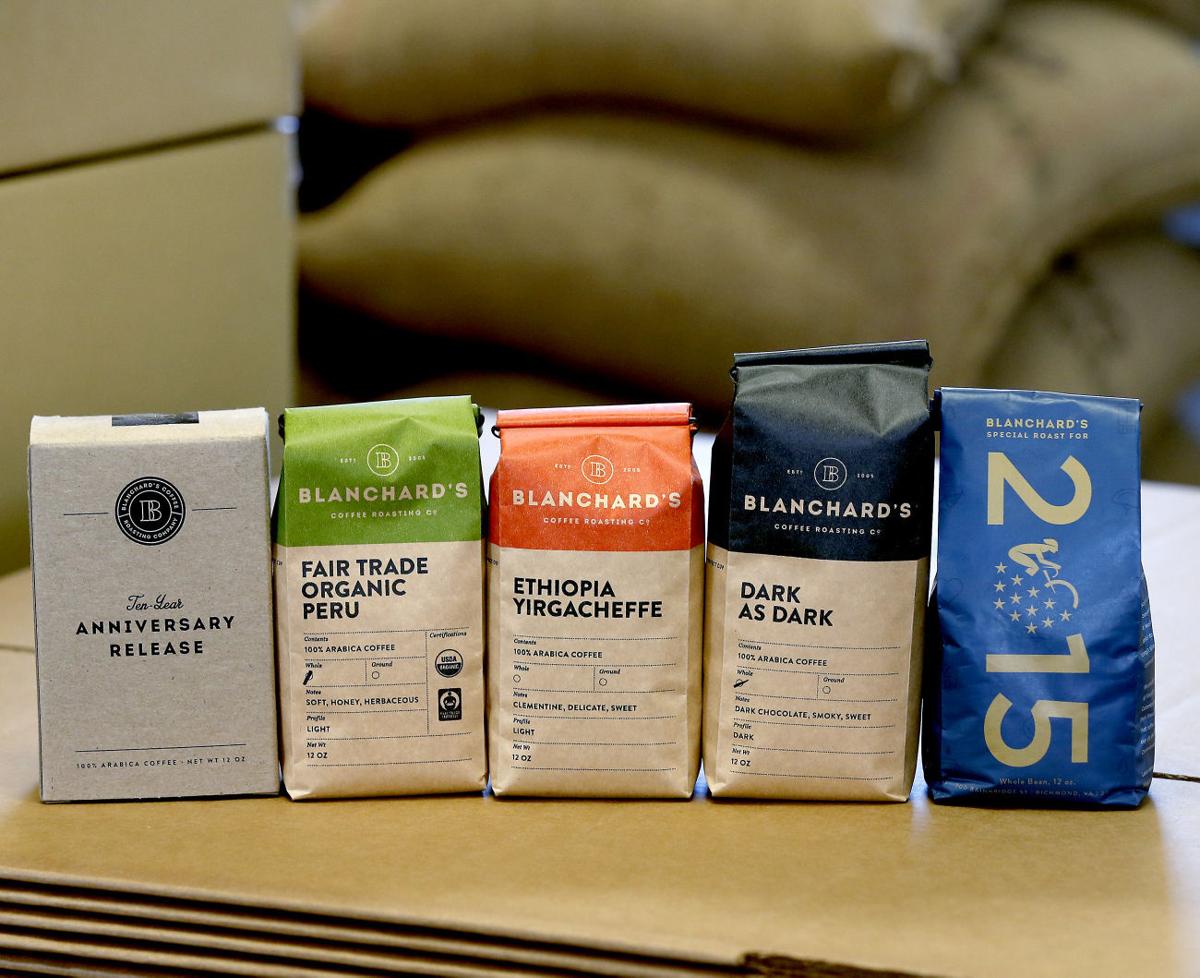 Some of the coffee at Blanchard's Coffee Roasting Co. in Richmond VA Fri. May 22, 2015.

He founded Blanchard’s Coffee Roasting Co. in January 2005 while working in the financial industry.

“I had always dreamed of being in the coffee business, and I thought there was an opportunity to roast better coffee in Richmond,” he said. “I realized if I didn’t do it then, I wouldn’t do it.”

He traveled to Florida and met with a coffee-roasting manufacturer to learn more about the business and the equipment he would need.

“I decided I wanted to be part of the specialty coffee world,” Blanchard said.

He started by selling coffee to his friends and family as a part of a coffee-of-the-month club. Sales of private-label coffee to Ukrop’s through Joe’s Market followed, and he later sold coffee to restaurants and coffee shops.

Blanchard’s buys the bulk of its coffee beans through coffee brokers in San Diego, New York and Atlanta.

“We have also moved into direct trade in Central and South America, dealing with the farmers,” said Joe O’Hallaron, who joined the company as a partner in 2010. “That gives us the ability to provide some very unique, special coffees from individual farmers. It takes a lot more effort to do direct trade.”

The company sources coffee beans from all over the world. In addition to Central America and South America, it trades in Indonesia and Africa. The company’s first coffee was Ethiopian Yirgacheffe.

“We have pared down our offerings to provide select, high-quality coffees,” Blanchard said. “We have 14 different coffees, and five or six of those are seasonal.”

“That helps to keep a consistent flavor throughout the year,” Blanchard said. “Our best selling is Dark as Dark, a blend of Latin American and Indonesian coffee.”

Cathy Moran, director of purchasing at the University of Richmond, buys coffee from Blanchard’s Coffee Roasting Co. to use at several of the school’s retail locations.

“We like it because it’s local, and we have coffee drinkers on campus that really like their product,” Moran said. “Their coffee sells really well. People go to our retail locations just to get Blanchard’s Coffee.”

She applauds the company’s customer service.

“They have worked with us as we have opened new operations,” she said. “They have been a good partner.”

“We are in almost 100 locations in Virginia, Washington, D.C., and southern Maryland,” O’Hallaron said. “We also have one Whole Foods in New Jersey.”

The company also sells to restaurants, such as Mamma Zu, Stella’s and The Roosevelt, as well as coffee shops. Along with the University of Richmond, another prominent local customer is the Virginia Museum of Fine Arts.

“These are big institutions that took a risk on us,” Blanchard said. “They want consistency and quality.”

In the past six months, the company has rebranded its logo, packaging, website and social media sites.

“We are trying to step up our branding and the footprint of where we are selling,” O’Hallaron said. “We have a big push outside of Richmond.”

Washington and Philadelphia are prime expansion areas for the company.

“That is a niche we thrive in,” Blanchard said. “D.C. is a hotbed for specialty coffee. Philly might be another target.”

Since 2010, the company has quadrupled its revenue.

“This year, we are having the best year we have ever had, so far,” Blanchard said.

O’Hallaron credits that success to the company’s employees.

The company will be moving from its Bainbridge facility to a larger space in Scott’s Addition this fall, though a lease has not been signed.

“It will include a world-class training facility,” O’Hallaron said of the new location. “Training and education are another big part of our focus. We will be training anyone in the coffee industry on everything from barista to roasting skills.”

“It’s a great product. It’s been a wonderful relationship,” he said of working with the company. “They have trained numerous baristas for us.”

Manny Mendez, one of the owners of Kuba Kuba, Galley and Kuba Kuba Dos, works with the company to roast coffee to his specifications.

“They do that for every restaurant customer they have,” he said. “Everyone always compliments us on our coffee.”

What is it?: Wholesale coffee roasting company

Employees: Eight, not including the owners

Some of the coffee at Blanchard's Coffee Roasting Co. in Richmond VA Fri. May 22, 2015.