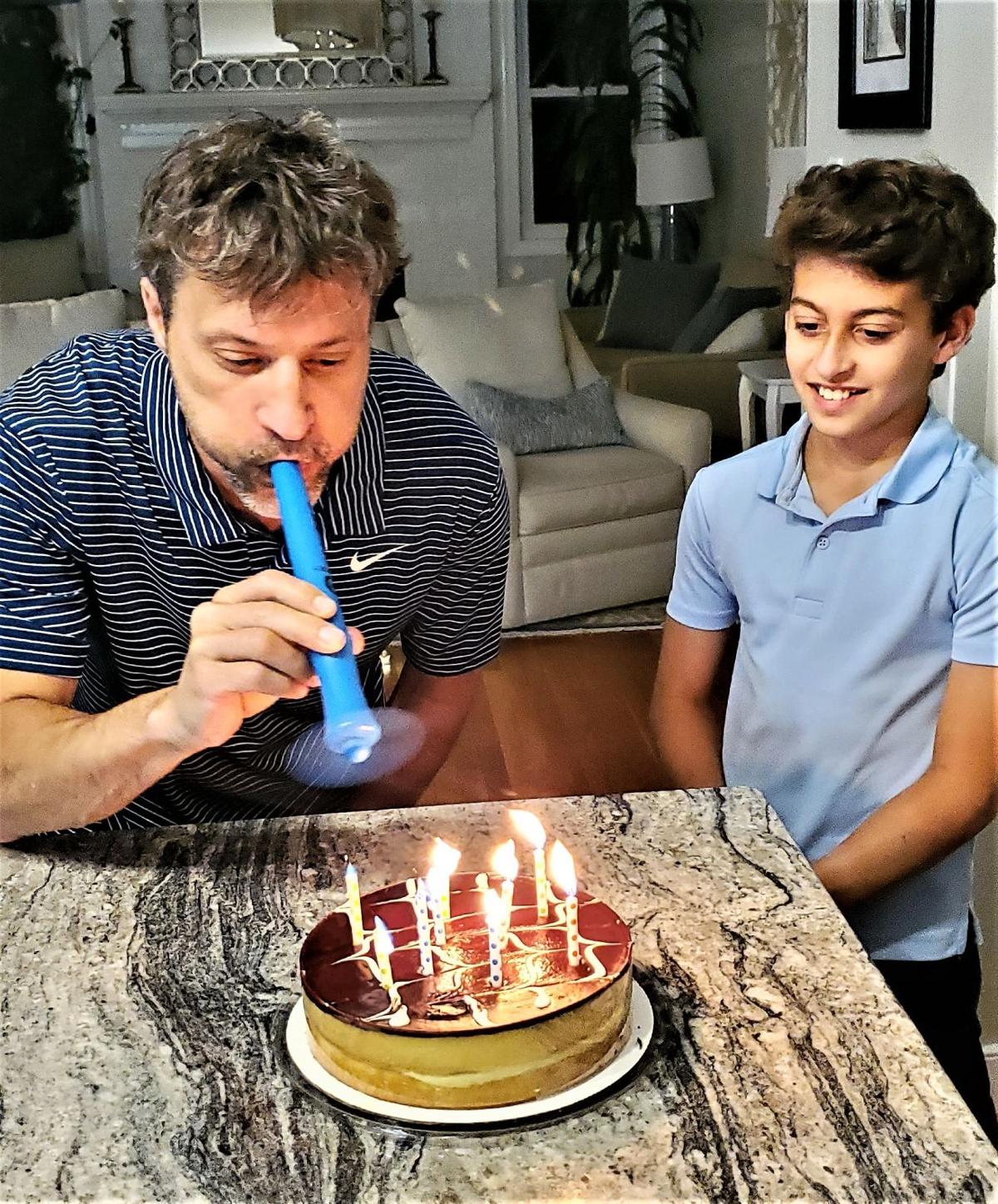 Mark Apelt blows out candles with the Blowzee as his 12-year-old son, Jake, looks on.

Mark Apelt demonstrates to his son Jake the sanitary way to snatch flame off birthday cake candles with the Blowzee device he created. 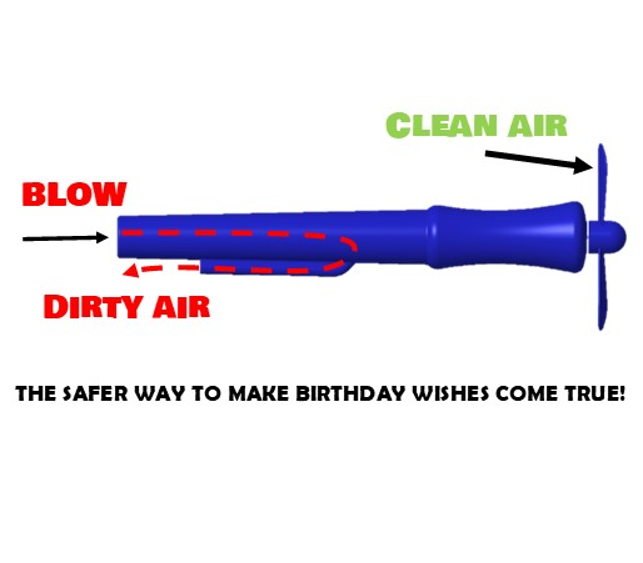 This diagram shows how the Blowzee works to keep droplets of bacteria from getting all over a cake.

Wafting out flames with a paper plate, making a separate cake just so someone can make a wish and even picking up candles and blowing them out one by one are some of the creative ways people have used to safely blow out birthday candles during the pandemic.

Now, two Henrico County fathers have developed a solution: the Blowzee, a device that allows kids — or even adults — to blow out candles without spewing germs and spit all over the birthday cake.

“Kids are not the cleanest,” said co-founder Mark Apelt, who has a 12-year-old son at home. “I love my son, but sometimes he’s just gross.”

The Blowzee perfectly fits in with all of the usual birthday decorations. Someone could easily mistake it for a Kazoo at first glance, and the two products look similar in design.

The birthday boy or girl needs to purse their lips onto the open end of the bright blue Blowzee device. As he or she blows into the device, it activates a switch connected to a lithium battery-operated fan that blows clean air to extinguish the candles.

The air blown into the Blowzee is directed back toward the user instead of toward the cake. The device can then be cleaned with an alcohol wipe and stored until the next birthday.

The idea for the Blowzee came about in January 2020, when Apelt, 44, and some of his friends had attended a child’s birthday party and saw the boy spit all over the cake when trying to blow out the candles. The dads got together for beers later and decided something was needed to blow out candles without sharing all of the germs.

A few months later, with the added COVID-19 downtime, Apelt and a fellow dad friend, who is a silent partner in the business, got to work on creating a product. The two partners invested about $5,000 apiece in the startup business, called Mach 33 Ventures, to get the project started.

It took 17 prototypes and over 40 cakes to make the Blowzee, which came out in March.

Since the Blowzee hit the market in the spring, it has attracted some media attention. The New York Post published a story about it on May 25, and Jimmy Fallon mentioned it on “The Tonight Show” a day later.

“I think it’s a good idea,” Fallon said during his monologue.

Since its mention on NBC’s late-night show, the product has really taken off, Apelt said, calling the last two weeks “chaotic.”

About 5,000 Blowzees were manufactured for an initial trial run, Apelt said. “We are basically running out of those now.”

The business has placed an order for 10,000 more, he said. He has talked with manufacturers about making orders as large as 100,000 to keep up with expected demand.

The Blowzee is available for purchase for $9.99 on the company’s website, on Amazon and at Ukrop’s Market Hall at Horsepen Road and Patterson Avenue in Henrico. Apelt has reached out to different retailers to carry his products, including Wegmans, Publix, Party City, Target and Walmart.

Apelt also has been contacted by individuals and stores in countries including Canada, Brazil, Portugal and the United Kingdom that are interested in selling the Blowzee.

Apelt, who’s been a stay-at-home dad since his son was born 12 years ago, knows a little bit about how science works even though he had never invented anything before. He earned an undergraduate degree in environmental science at the University of Virginia and a master’s degree in the same subject from Virginia Commonwealth University.

He said he used the scientific method and other important staples of the science world to put together his patent-pending design.

Besides, he wanted to find a way to cut down on spreading germs. Blowing candles out on a birthday cake increases the amount of bacteria on a cake by an average 1,400%, according to a 2017 study by Clemson University. The study had people eat hot pizza and blow out candles on a Styrofoam disk covered in icing to determine how much bacteria got on the icing.

Even though the design of the Blowzee is unique, there are similar products on the market that help to blow out birthday candles.

“We were happy when we started doing our original research to find half a dozen products like what we were thinking about. It gave us the momentum to go with our idea,” Apelt said.

One product is the Original Blow-Out, which creator and home baker Francine Coughlin from Connecticut first started thinking about in 2016.

“Birthday cakes grossed me out and I wondered if I could think of something. I took a Wilton [decorative piping] tip and I blew through it and I thought ‘wow this is pretty powerful’ and that is how it started,” Coughlin said about her product, which is sold at small bakeries and grocery stores in Connecticut, through a mail-order magazine and on her website, blow-out.net, for about $3.

Instead of turning on a battery-operated fan like in the Blowzee, her product is smaller and uses a filter.

Sales, she said, have been good since she started selling the Original Blow-Out in December 2018, and have picked up even more since COVID-19.

“I know it’s going to continue because even after the pandemic, people are still going to be cautious,” Coughlin said.

The Blowzee has gotten a lot of attention at Ukrop’s Market Hall, said Scott Aronson, president of Ukrop’s Homestyle Foods, who said there have been “lots of smiles and comments” about the product.

Aronson said his family used the product recently for his son Jack’s 17th birthday. “We handed him the Blowzee, and everyone’s eyes lit up. Everyone thought, what a great solution to a problem we didn’t know we had until last year.”

What financial pros have to say about inflation fears

What factors are driving these inflation fears? Plenty. Also, check out more of the week's best finance reads from experts at NerdWallet, The Motley Fool and Forbes.

Mark Apelt blows out candles with the Blowzee as his 12-year-old son, Jake, looks on.

Mark Apelt demonstrates to his son Jake the sanitary way to snatch flame off birthday cake candles with the Blowzee device he created.

This diagram shows how the Blowzee works to keep droplets of bacteria from getting all over a cake.