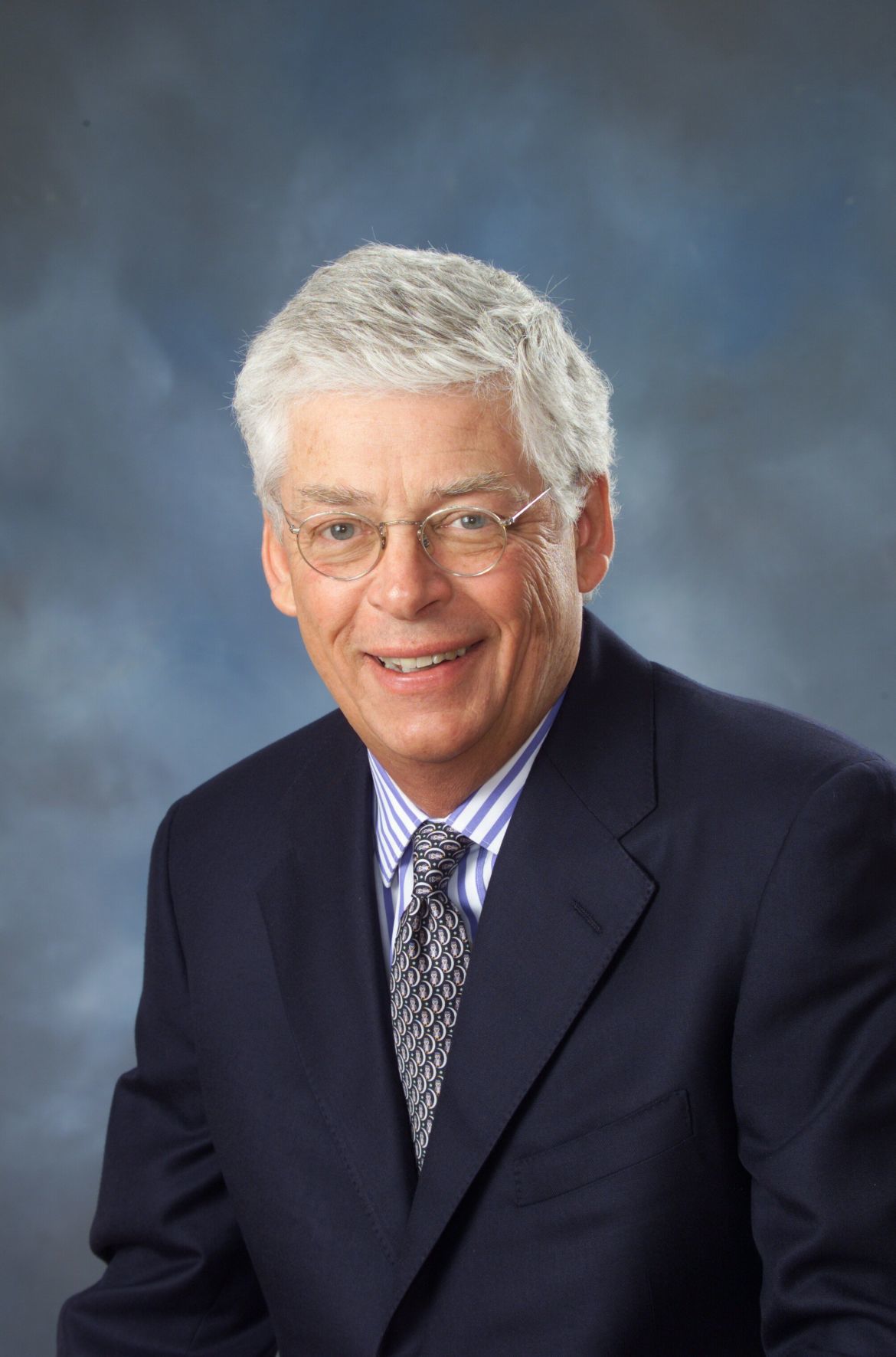 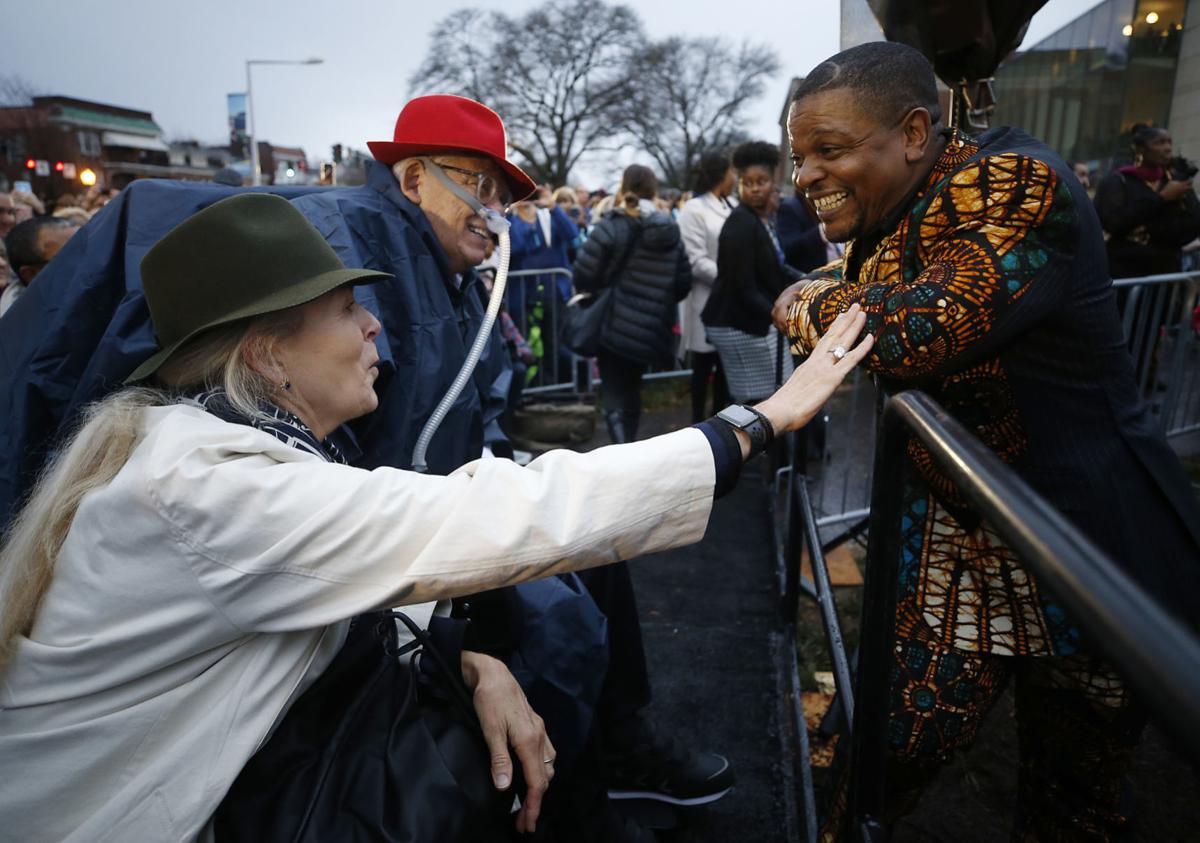 Kehinde Wiley, right, talks with Pam and Bill Royall after the unveiling ceremony for his statue "Rumors of War" at VMFA Tuesday, Dec. 10, 2019. The Royalls were instrumental in bringing the sculpture to Richmond. 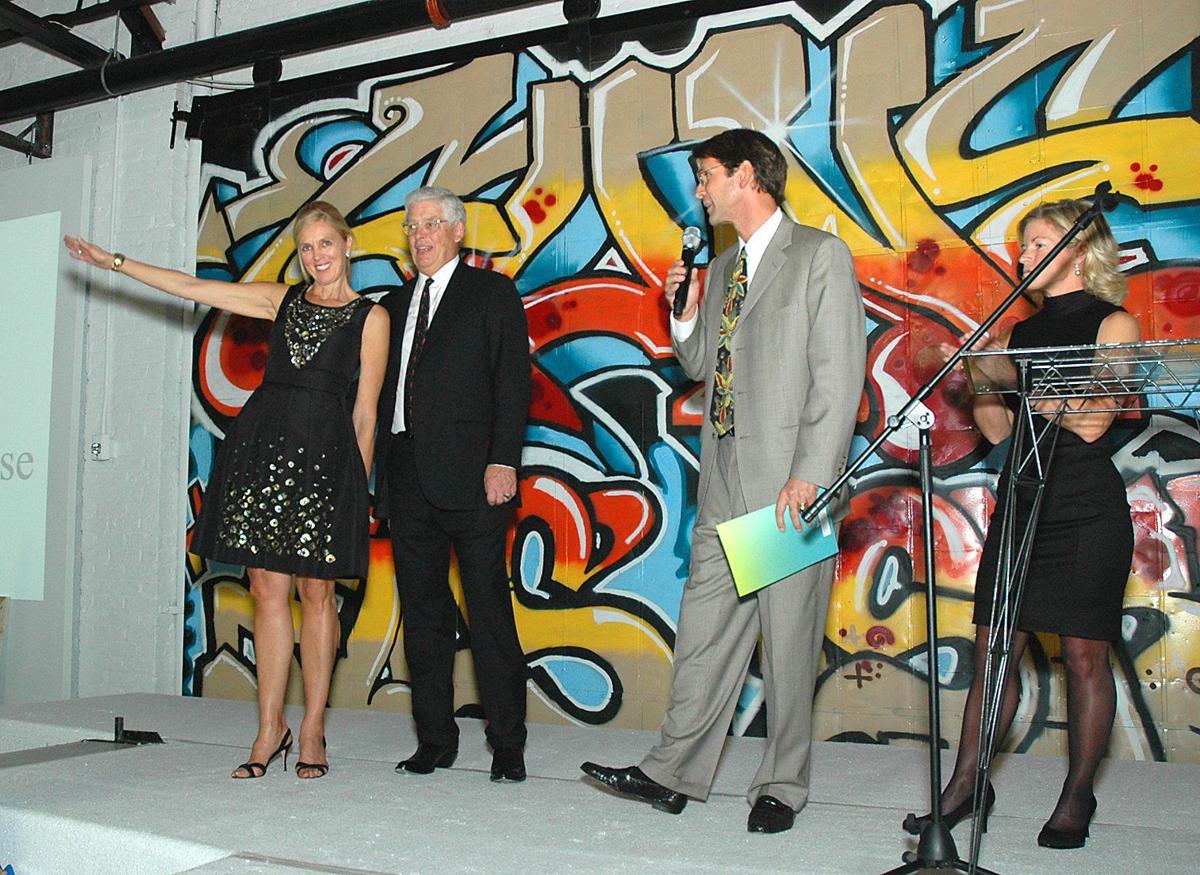 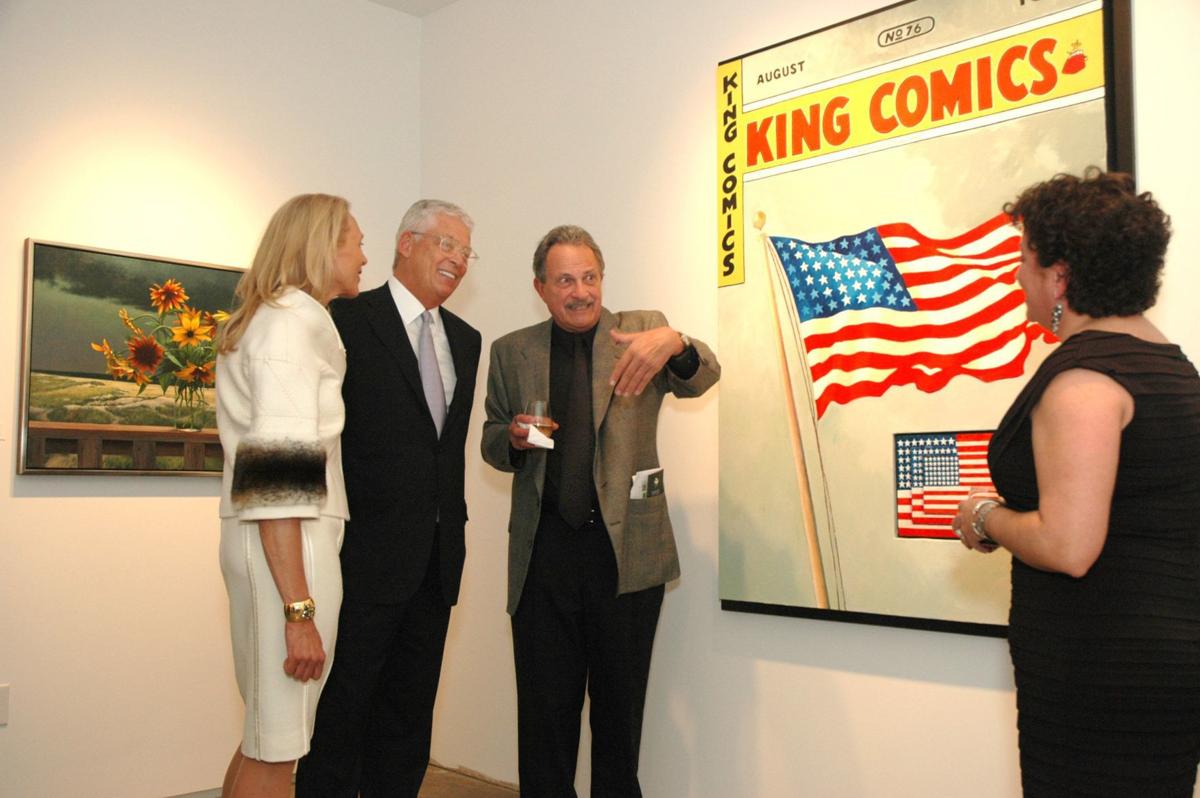 Standing with his soon to be auctioned painting (Center) artist Bernard Martin entertains (R) Sharon Fuller and (L)Pam and Bill Royall. At far left is a painting by Nancy Camden Witt.

William A. “Bill” Royall Jr., who founded and ran a successful direct marketing services company decades ago and later became a major patron of the arts, died on Thursday. He was 74.

Despite being diagnosed with ALS, a neurodegenerative disease, in April 2019, Mr. Royall led the charge to bring Kehinde Wiley’s “Rumors of War” sculpture to the Virginia Museum of Fine Arts.

The sculpture’s dedication in December was one of his proudest moments, said his wife, Pamela Kiecker Royall.

“Bill would say art changed people’s lives and taught people to look at the world differently and it provided opportunities,” his wife said. “He was passionate about it.”

He and his wife, who own several paintings by Wiley, developed a relationship with the artist.

As a VMFA board member for the past decade — and board president from 2014 to 2016 — Mr. Royall called on his fellow museum trustees to acquire the statue to make a statement for a generational change. The board unanimously approved the $2 million acquisition in June.

“Bill instantly and instinctively knew that sculpture should be in Richmond,” his wife said when they heard Wiley was considering creating it. “Bill made an emphatic and persuasive plea to the board to approve the acquisition. Bill wanted to make sure it came to Richmond.”

The Royalls were lead donors toward the sculpture acquisition, but “he passionately inspired others to support the same important project for the museum. It made a big difference in terms of the sense of it belonging to the community.”

The dedication day in December was “such an emotional and wonderful day” for Mr. Royall and the Richmond community, said Steven A. Markel, chairman of Henrico County-based specialty insurer Markel Corp. who serves on the VMFA board.

“He was so instrumental in making that happen,” Markel said. “He is the kind of guy that gets things done. He was very passionate and very committed to social justice. His crowning glory was the statue in front of the VMFA. It was so timely.”

Markel said Mr. Royall made an impact in the Richmond community.

“He had a huge success in building a magnificent business and turned and used his resources to support the community in so many different ways,” he said.

One such project was the Institute for Contemporary Art at Virginia Commonwealth University that opened in April 2018.

Mr. Royall and his wife donated $5 million toward building the glass- and zinc-encased building at Broad and Belvidere streets. They also served as co-chairs, along with Markel and his wife, Kathie, on the capital campaign to raise the $41 million for the ICA.

The Royalls also donated more than 100 works of modern and contemporary art to the VMFA over the past decade.

“Bill and Pam have been enormously generous donors of contemporary art and significant funds to allow us to buy works by emerging artists from around the world,” said Alex Nyerges, VMFA’s CEO. “Bill also served as a board of trustees member for two five-year terms, giving of his time, his energy and his ideas. He will be greatly missed.”

Mr. Royall served on VCU’s board of visitors from 2011 to 2015 and was the vice rector for his last two years. At the time of his death, he served on the executive committee of the VCU Real Estate Foundation and on the advisory board of the ICA.

He attended VCU from 1969 to 1972 — but was three credit hours short of getting a degree, his wife said. He had attended Emory & Henry College from 1964 to 1966. He received an honorary doctorate from Virginia Union University in 2016.

While in college, Mr. Royall got involved in politics, forming a college Republican club at Emory & Henry.

He moved to Richmond in 1969 to work on Linwood Holton’s gubernatorial campaign. He became the executive director of the Republican Party of Virginia for two years before serving as campaign manager and later as press secretary to Republican Gov. John N. Dalton.

He left the governor’s office in 1979 to become president of North American Marketing Corp., a provider of direct mail marketing, survey research and consulting services.

Hampden-Sydney College was its first client in 1989. The following year, his company worked with three colleges, then it was six colleges a year after that and then 12 colleges the following year. In the fifth year, Royall & Co. was working with 26 colleges.

“At that point, it became clear to me that this was something I really, really enjoyed — working with colleges and universities,” Mr. Royall said in a video presentation about his life that was used when he was inducted into the Junior Achievement Greater Richmond Business Hall of Fame in May 2014.

“We hear a lot of stories from admission directors and admission staffers about young people that have been recruited that they have never heard of their school or have never thought about going to college until they received an email or a letter from Royall & Co. on behalf of that college,” Mr. Royall said in that video presentation.

The business has completely focused on college and universities since 1995.

In January 2015, the company was acquired by The Advisory Board Co., a Washington, D.C.-based research and consulting firm for universities and hospitals, for $850 million.

Nearly three years later, The Advisory Board completed a spinoff and sale of its education division, called EAB. That division, which included the Royall & Co. business, now operates as a standalone provider of services to more than 1,700 schools, colleges and universities.

The bulk of EAB’s enrollment management services are in Henrico, where it employs more than 500 people.

Mr. Royall’s greatest achievement was his generosity, said his wife, a former VCU marketing professor who has been the company’s head of research for enrollment services since 2001. They were married in 2009.

“It was not just financial support. He empowered other people. He made people realize what their potential was,” she said. “He saw the possibilities in people. He was inspiring and generous with his creative energy.”

Mr. Royall had a three-part career, she said. He started out in politics. He then had a career working with higher education.

The last 15 years, he had been engaged in the Richmond community after stepping back from the day-to-day management of his business.

“His final career was all about philanthropy and being a steward of causes that were important to him that made a difference in people’s lives,” she said.

“I wouldn’t say Pam and I are so much philanthropists as we are investors. We invest in opportunities to effect change,” Mr. Royall said in the 2014 video presentation.

Mr. Royall was born in Tazewell County in March 1946. His family moved to Alexandria when he was in the second grade.

“My parents always reinforced any entrepreneurial activity,” he said.

A memorial service is being postponed until COVID-19 restrictions are lifted.

Kehinde Wiley, right, talks with Pam and Bill Royall after the unveiling ceremony for his statue "Rumors of War" at VMFA Tuesday, Dec. 10, 2019. The Royalls were instrumental in bringing the sculpture to Richmond.

Standing with his soon to be auctioned painting (Center) artist Bernard Martin entertains (R) Sharon Fuller and (L)Pam and Bill Royall. At far left is a painting by Nancy Camden Witt. 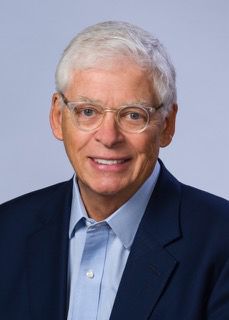