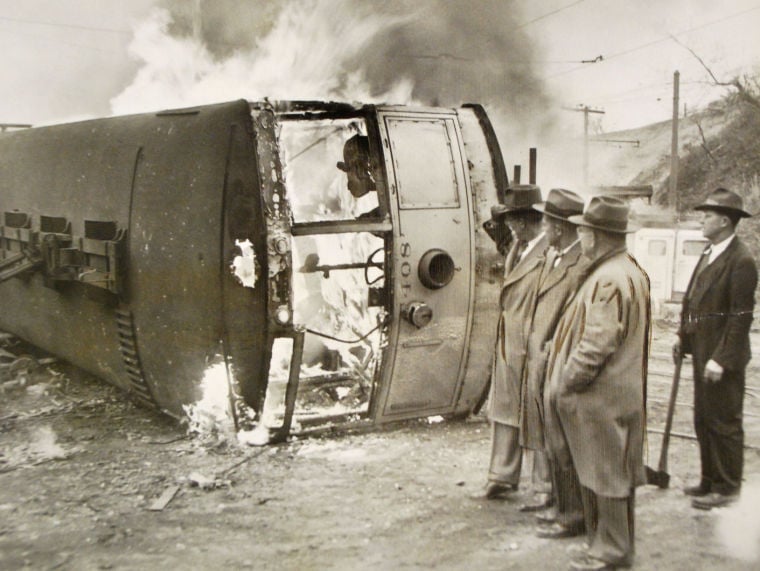 No. 408 of the Richmond trolleys was the last to burn 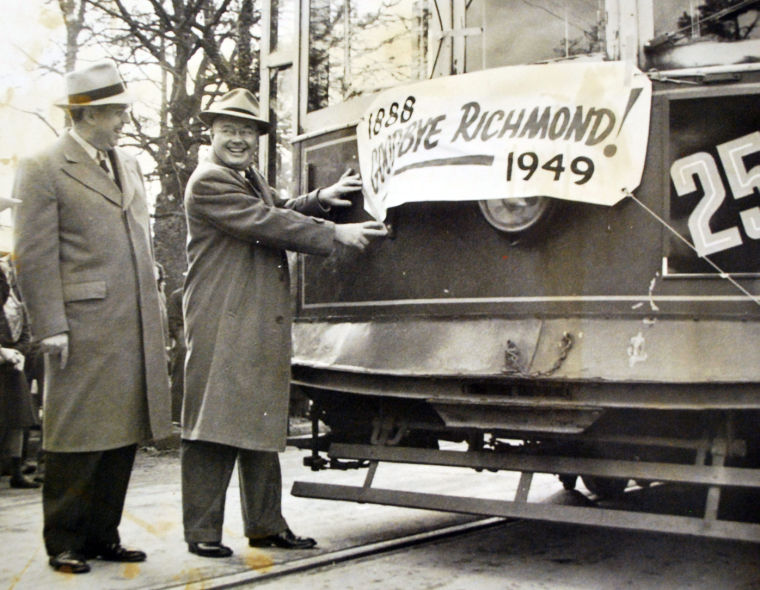 Why were they so happy to see the trolleys go away? 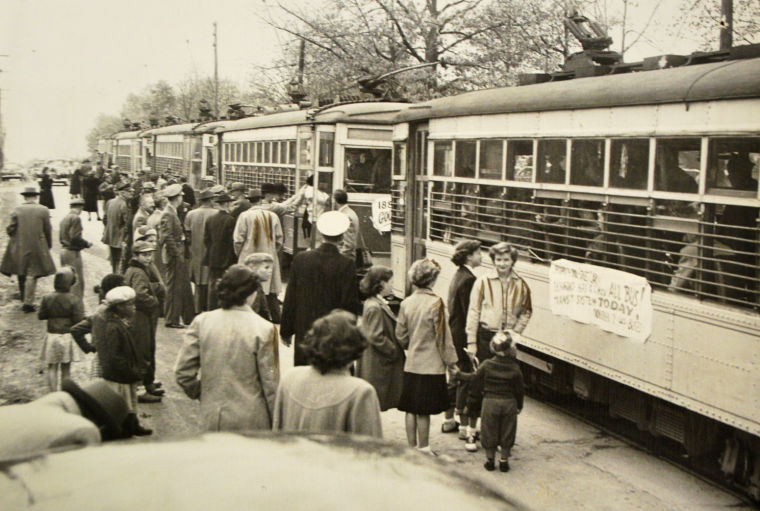 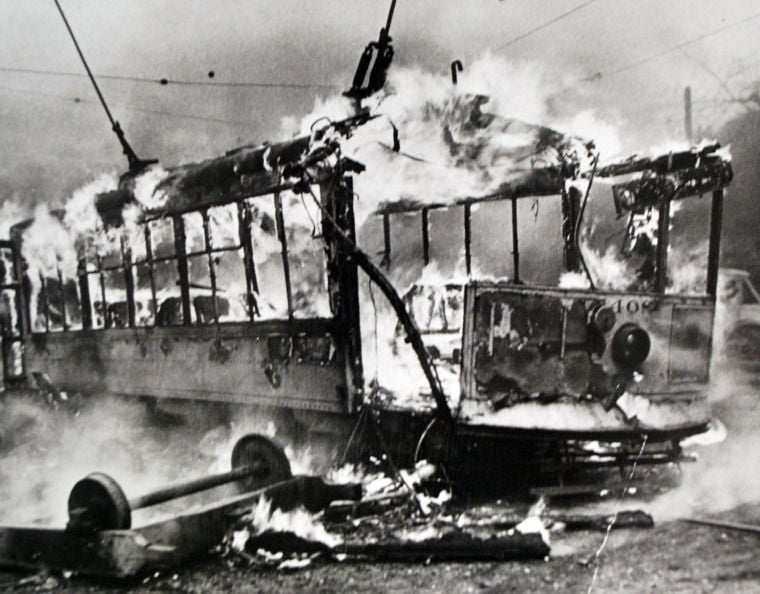 When you write a column that receives questions from readers and often requires answers from sectors of government who take vacation -- all at the same time -- you sometimes have to improvise. I had to ask my own question this week, and I need your help to find an answer.

Why did they burn all of the Richmond trolley cars? - P.R.

I've been researching Richmond's old street car lines and I've been fascinated with the idea of something other than the automobile commanding Richmond's streets. While I was looking through old trolley photos in the Richmond Times-Dispatch archives, I found plenty spectacular photos (I've shared a few with this article), but they brought more questions than answers for me.

In Richmond, the final ride came Nov. 25, 1949. Trolley 408 led nine others in a parade down Main Street, drawing dozens of riders taking that last ride and thousands of onlookers.

I saw a few photos of civic and transit leaders who looked quite smug about the whole thing. Why were they so happy to see the trolleys go away? I have not been able to find a reason for the ceremonial burning of the cars. From the archives:

"On Dec. 15, 1949, at 9:30 a.m., Lee F. Davis, who was then Virginia Transit Co. vice president, put the torch to Old 408 at the streetcar funeral yard. Curiously, 408 flatly refused to burn even though drenched with gasoline, oil and hot wood coals. After about 30 minutes of smoldering, the old car finally, inexorably was consumed by flames. And the death knell was sounded for all Richmond streetcars."

More from the archives, with more romantic story-telling:

"They drenched old No. 408 in gasoline. They chopped holes in her still sturdy hull. They added oil and shoveled on hot wood coals. They stood back to watch her burn, to watch her funeral pyre. There was something almost eerie, however, about old No. 408 and the dignity that the flames couldn't besmirch. She refused for 30 solid minutes to burn. When she did burn she never lost her specter of gallantry. Old No. 408 hove herself suddenly erect, groaning at her seams and flinging fire out into space. They had placed her in a less-dignified position, on her side, so that they could give the flames a swifter headway. But old No. 408 died the way she had lived. Right-side up and spitting sparks."

Old No. 408 wasn't alone. Many like her were ready for the scrap heap. Most of Richmond's idle streetcars were torched in the "Great Car Burning" of 1949. More than 50 were destroyed and only a few survived.

But why burn them? Sure, they were covered in old unusable wood and fabric and they had to get the metal ready for the "scrap heap." Looking at the photos, it seemed to be more like dancing on the grave and a celebration of the end of an era than just ceremony.

I've heard that automobile companies were behind the switch from trolleys to buses -- and the proliferation of more automobiles. I've often read that the auto industry was behind many changes to laws that allowed cars to take over our streets -- like supporting legislation to make up something called "jaywalking," a way to keep pedestrians off the streets and let more cars take the streets, at faster speeds.

Richmond Magazine's Harry Kollatz Jr. (of course) came the closest to answering the question of why the trolley's were burned and who was behind the plan to abandon the trolleys:

"Virginia Electric and Power Company ultimately controlled the entire Richmond system, although in 1944 the federal Securities and Exchange Commission divested the utility of its transit holdings. By then, buses and automobiles were making electric streetcars less relevant. By 1949, more than 100 electric transit systems were replaced with General Motors buses in 45 cities. That April, a Chicago federal jury convicted GM of criminally conspiring to replace electric streetcars with buses. The ruling came too late for Richmond, though."

Richmond still hasn't figured out how to replace the success of the trolleys. But there is a challenge to Richmond's streets coming from pedestrians and bicycles. As we move to make this city more pedestrian- and bike-friendly with projects like the proposed Floyd Avenue Bicycle Boulevard, sharrows, bike lanes, improved sidewalks and pedestrian street crossings, keep in mind that just because we've been in love with the automobile for a century, doesn't mean that we can't share the roads.

Many of Richmond's streets were designed for walking, biking, horse carriages, trolleys, etc. We can take back the streets and make our city more livable and safe for everyone.

NOTE: If you are interested in learning more on the trolley system, or have thoughts and historic facts to share, please post a comment or email me priggan@richmond.com. I'd love to do a follow-up story.

Why Richmond, Why?!? Lots to Say About Streetcars

It has been two months since I began my journey to answer the question Why did they burn all of the Richmond trolley cars? That column sparked…

Why Richmond, Why?!? Questions About Street Names

We've been collecting questions asking about many Richmond-area streets and how they got their names.

Why Richmond, Why?!? What if the Streetcar Came Back?

With all of the emails, comments and online chatter about streetcars in Richmond, it is time for an update and a check on what other cities ar…

Who Killed the Electric Streetcar?

A few weeks ago I mentioned how vehicle miles traveled is becoming an environmental calamity in the world. Specifically, the pollutants emitte…

Richmond Trolley Rolls from Past into Future

In a city proudly tied to its history, it’s surprising that our electric trolley cars—put in service here in 1888—were ever put to rest. Yet, …

No. 408 of the Richmond trolleys was the last to burn

Why were they so happy to see the trolleys go away?