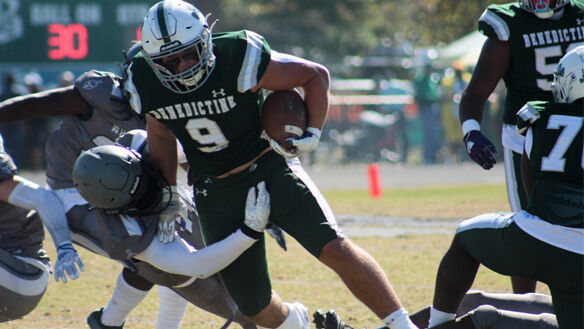 Benedictine Leo Boehling charges through the line and sheds a tackler in the team’s homecoming win over Mt. Zion Prep Academy on Oct. 22. 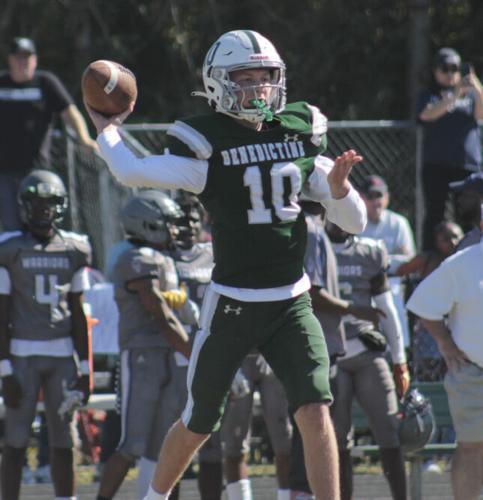 Cadets quarterback Wes Buleza makes a pass toward the sideline in the second quarter. 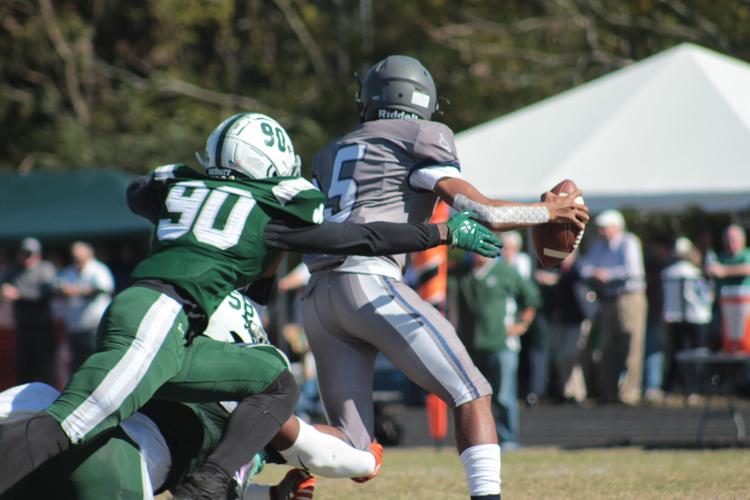 Zion Hunter (90) goes for a sack in the first half versus Mt. Zion. 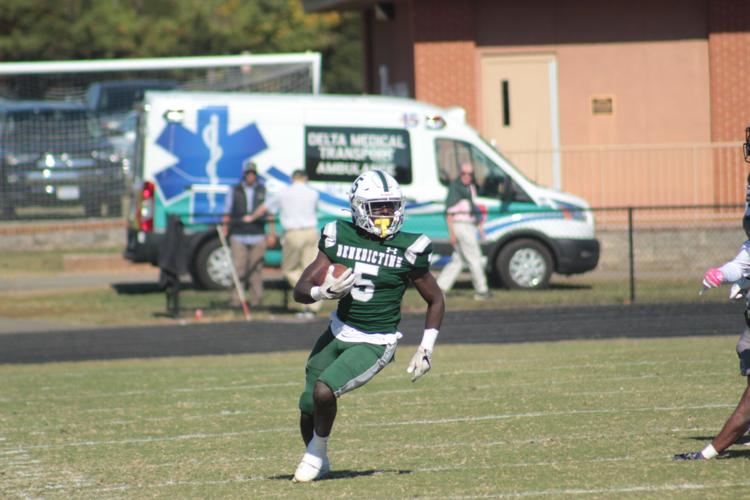 With a packed Homecoming crowd and a beautifully sunny Saturday afternoon at Bobby Ross Stadium, the Benedictine Cadets hosted the Mt. Zion Prep Academy Warriors and took control early en route to a 31-6 win on Oct. 22.

The Cadets (6-2) entered the second of a three-game homestand with the Warriors (1-6) having defeated the Collegiate Cougars in a 45-14 win on Oct. 14, and they again jumped out to an early lead that they’d hold onto for the entirety of the game.

Starting off with a 19-yard field goal by Cole Draucker in the second quarter, the Cadets defense stopped the Warriors’ most promising drive that got down to their 29-yard-line, but was halted thanks to a sack by Zion Hunter early in the drive and Jacob Moore and John Garbett combining for another on fourth down.

On the ensuing drive, the Cadets had their first touchdown of the day when quarterback Wes Buleza found tight end Luca Puccinelli across the middle for a 20-yard score with 1:35 left in the first half.

The Warriors were able to score just before half on a 57-yard quarterback keeper to keep the game close heading into half, though a missed extra point made it a 10-6 Cadets lead.

The Warriors had a chance on their first drive to potentially take the lead after earning good field position off an opening drive interception of Buleza, but Hunter again stepped up to make a huge impact play on fourth down that got the Cadets defense off the field with the lead intact.

Then, with over six minutes left in the third, running back Leo Boehling had a handful of strong runs that saw him run through defenders and set up the team in the red zone, where he capped off a strong drive with a 16-yard touchdown run to make it a 17-6 game. Before his big run into the end zone, Boehling bruised ahead for a 27-yard run that put the Cadets into the red zone.

In the fourth quarter, wide receiver Riley Roarty got in on the action for the Cadets and the vertical threat scored his third touchdown in two games with a 17-yard score that gave the home team a commanding 24-6 advantage with 9:33 to go in the game. It was a strong response from Buleza after his interception early in the half, as he quickly got back in rhythm and found Roarty, one of his most trusted downfield threats, for another Benedictine score.

To cap off the scoring for the Cadets was a pick-six from cornerback Khalil Moore, who added another highlight to an impressive junior campaign by snagging the pass and cutting inside to beat multiple defenders for a touchdown that punctuated another victory for the Cadets.

With the backups in to seal the game, including junior Jordan Callahan under center, the Cadets were able to move on with another win as they approach postseason play.

Benedictine has two games left on its regular season schedule, with the next matchup being a home meeting versus St. Michael the Archangel (5-3) on Saturday, Oct. 29 at 1 p.m. After that, the Cadets travel to Dumfries for their regular season finale to take on Saint John Paul the Great Catholic (2-7) on Friday, Nov. 4 at 7 p.m.

Benedictine Leo Boehling charges through the line and sheds a tackler in the team’s homecoming win over Mt. Zion Prep Academy on Oct. 22.

Cadets quarterback Wes Buleza makes a pass toward the sideline in the second quarter.

Zion Hunter (90) goes for a sack in the first half versus Mt. Zion.