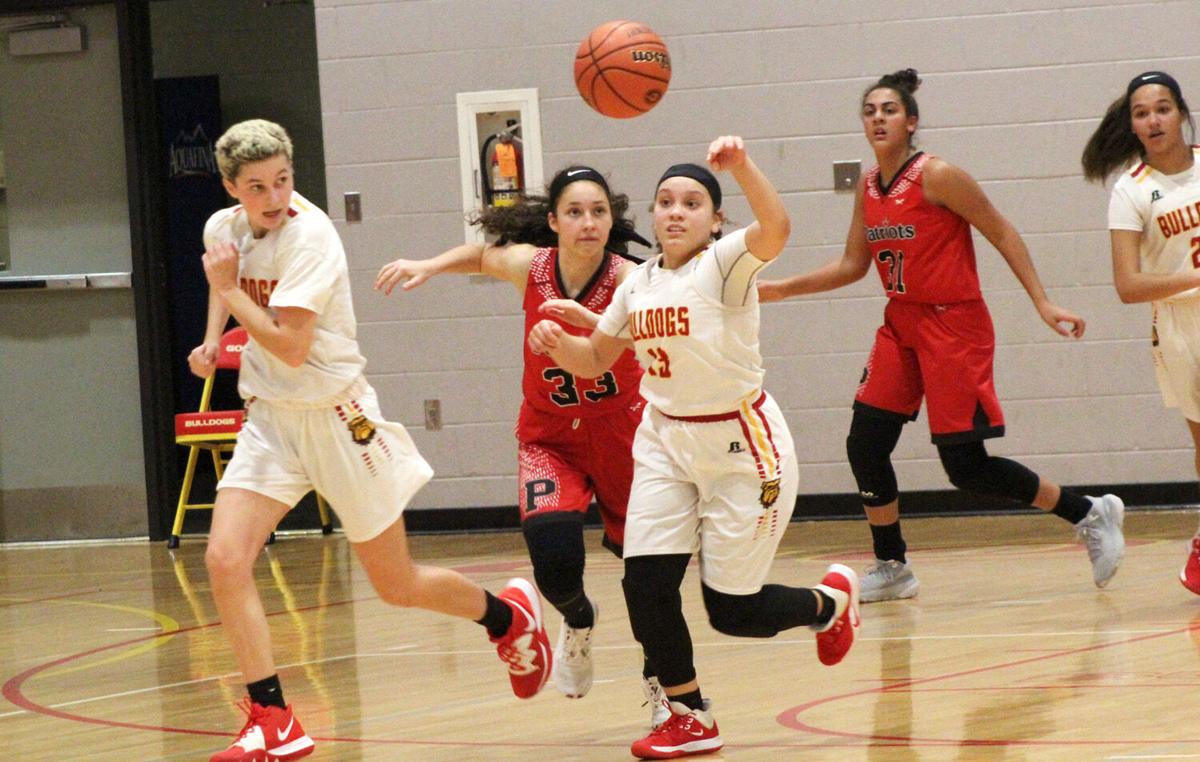 Goochland's Jenika Carter (13) reels in and dribbles the ball down the court while her teammate Emmy Paulin (left) keeps pace in the Bulldogs' 2020-21 season opener versus the Central Virginia Homeschool Athletic Association on Jan. 5, 2021. 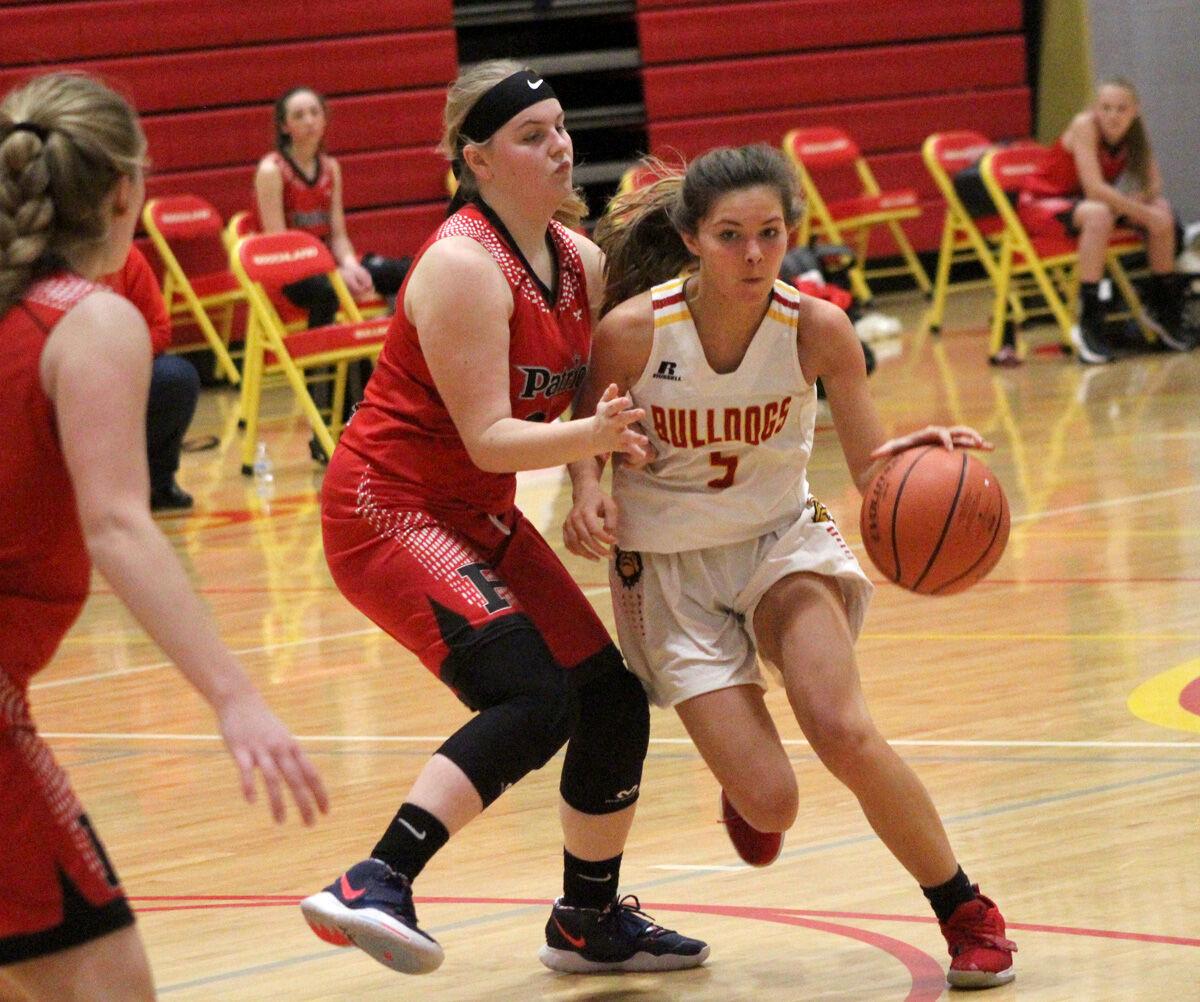 GOOCHLAND - When Goochland girls basketball took the floor for its first game of the year against the Central Virginia Homeschool Athletic Association’s Patriots, the young unit came away with a different type of victory that went beyond the final digits on the scoreboard.

The Patriots won the game 57-37, but to Goochland’s head varsity coach James Harris, this 2020-21 winter season is already a successful one. Because after all of the uncertainty over whether they would even get the chance to compete due to the ongoing COVID-19 pandemic and the school systems that have withdrawn from athletic participation this winter because of it, his Bulldogs are now playing. Their season is underway.

“There’s a lot of schools out there now that are not playing at all,” he said. “I think the fact that we’re just playing in the type of situation that we’re in, that’s a blessing.”

“With this season, I’m just looking forward to being able to play,” said junior returner Emmy Paulin, who led all players in Tuesday’s game with 16 points. “We didn’t realize we were going to be able to play, and I’m just glad I get to play basketball with these people...to have at least 11 games, that’s really big.”

Her teammate and fellow leading returner Gabby Ragone netted all 10 of her points in the second half. Ragone, who was the 2019-20 James River District Player of the Year, had a play to remember when she hit a running, leaping, buzzer-beating three-pointer at the end of the third quarter to tighten the visitors’ lead to 12 points.

Although the Bulldogs are coming off of a successful season in which they won the James River District tournament and regular-season championships, it’s a different team in a different year. Many newcomers help make up a guard-heavy team that will compete across 11 to 14 games in a regular season that has been made shorter by the ongoing pandemic. They’re also facing some unfamiliar teams this year like the Patriots, so for the players, it’ll be a matter of expecting the unexpected, learning each other and getting up to speed without a traditional offseason or scrimmages to provide them with game time minutes on the floor ahead of the regular stretch.

“We’ve just got to be ready for everything,” Paulin said.

Returners in addition to Paulin and Ragone include seniors Megan Bowers, Taylor Whitfield and Shaylah Duff. Junior Jenika Carter, who moved up this year from JV, showed command and communicated with her teammates on the court in the role of floor general, and two of the newcomers - junior Erla Thorkelsdottir and sophomore Rayanna Tibbs - utilized high-rising defense to hold the Patriots off of the glass when the Bulldogs were leading 5-4 early in the first quarter.

As the season progresses, Harris expects that the Bulldogs’ defense, transitions and shots will get better. He noted that the leadership and experience of Ragone and Paulin will be key in helping their young team.

While Tuesday’s game marked the Bulldogs’ first game this season on the hardwood, the team they were playing, the Patriots, had begun its season back in early December. In addition to gametime minutes, the visiting team also had size on its side, but the Bulldogs throughout the game were able to convert steals and rebounds into strong approaches and looks at the basket. Paulin especially shined in the second quarter, netting 9 of her 16 points and one of her two 3-pointers in the stanza.

“They didn’t give up,” Harris said of his Bulldogs. “They kept playing, and that’s what I like to see. No matter what the score is, anything can happen.”

Goochland’s next game is slated for next Tuesday at home versus Amelia County at 7 p.m.

Goochland's Jenika Carter (13) reels in and dribbles the ball down the court while her teammate Emmy Paulin (left) keeps pace in the Bulldogs' 2020-21 season opener versus the Central Virginia Homeschool Athletic Association on Jan. 5, 2021.