Goochland's Chris White hits an RBI double in the third inning of the Bulldogs' Senior Night home game versus Cumberland on June 1, 2021. 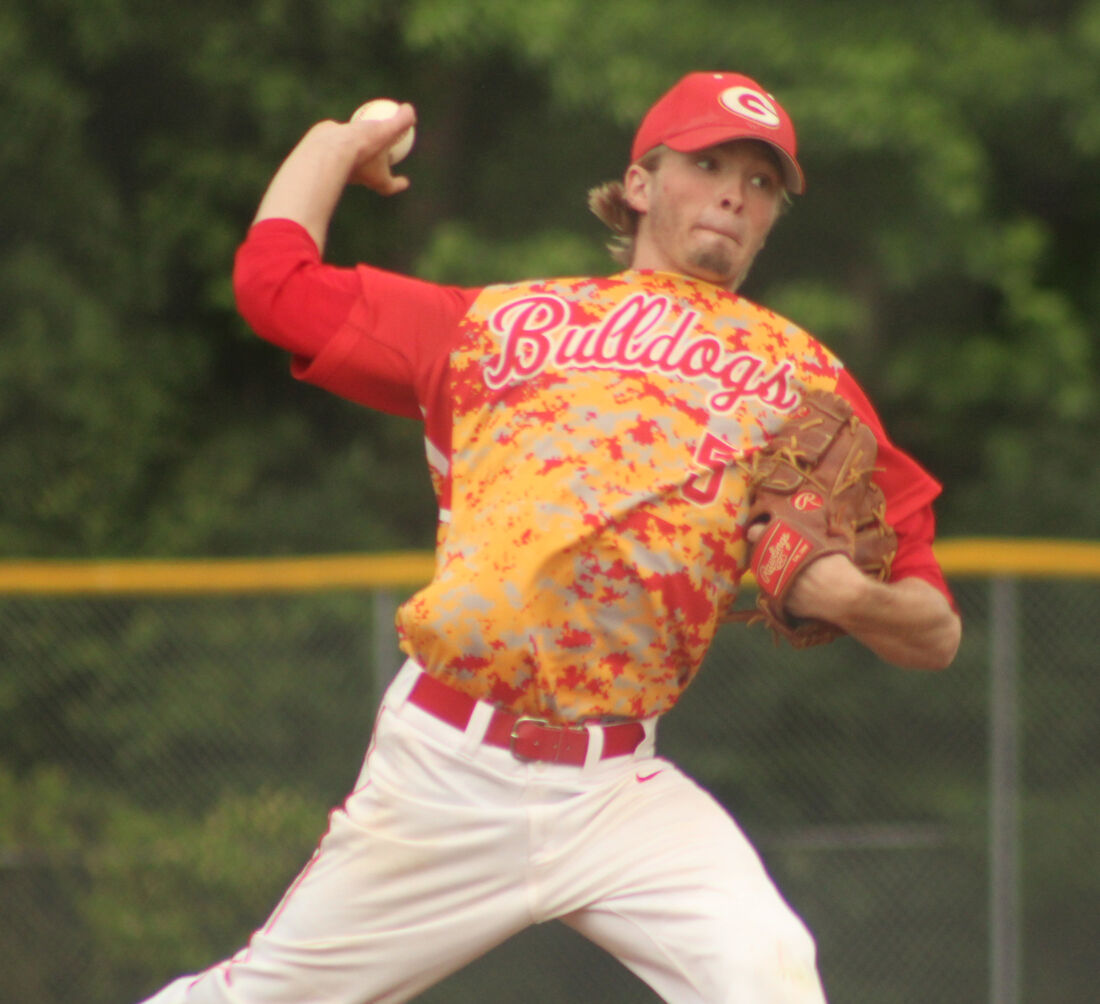 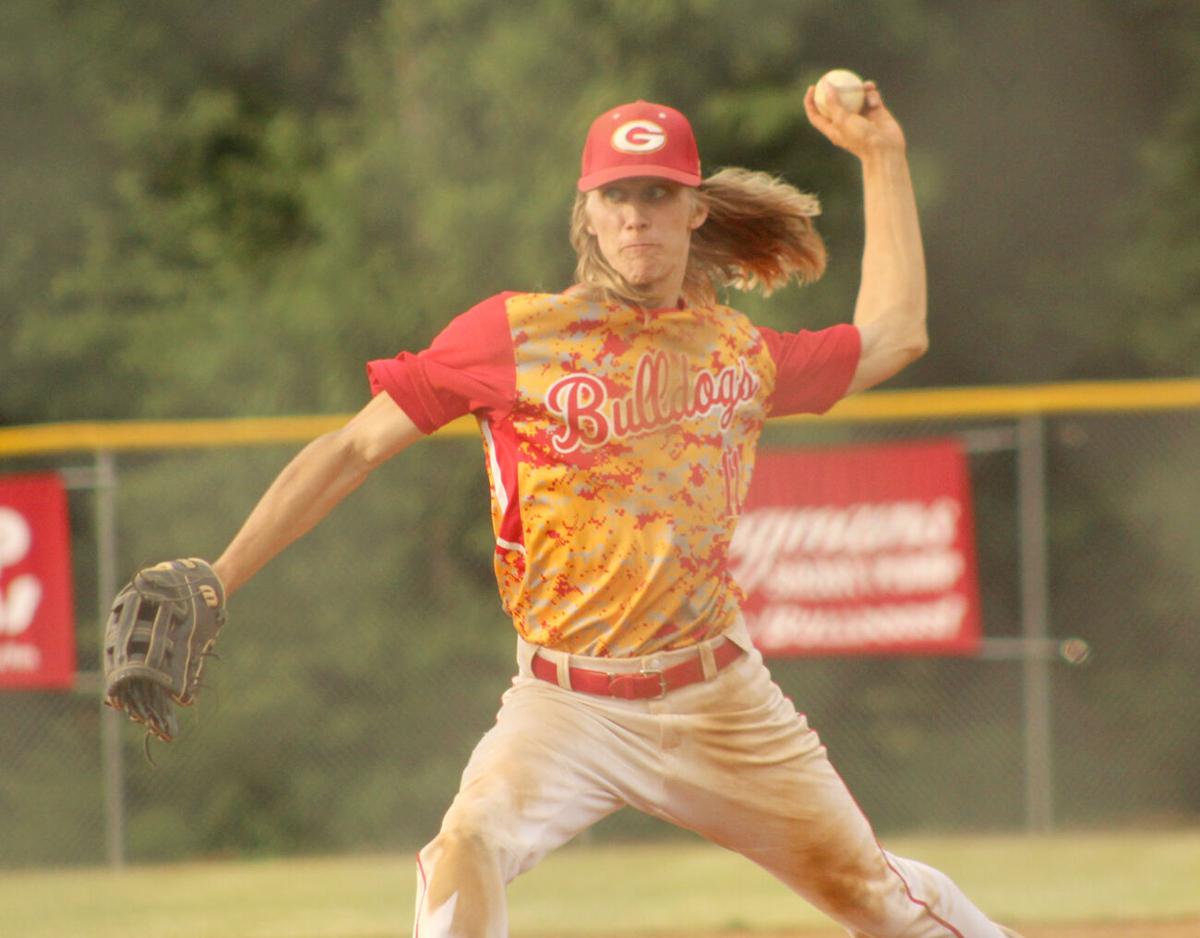 Goochland's Will Stratton pitches in the Bulldogs' Senior Night home game versus Cumberland on June 1, 2021.

GOOCHLAND -- Smiles were plentiful both on and off the field as the Goochland Bulldogs not only celebrated the contributions and efforts of their eight seniors, but also bounced back from last Thursday's setback to Buckingham with a resounding 16-0, five-inning victory over Cumberland on Tuesday.

The seniors also heavily contributed to the victory.

"Our seniors were excited - in front of a big home crowd, we had a lot of people come tonight, so it was good that we got that momentum early. It's one of those games you don't want to show up flat to, so we got three-up, three-down defensively right away, and then we put four on the board right away," said Goochland head coach Wes Farkas. "Momentum-wise, that's exactly what we needed to get done, and it carried over to the rest of the game I think."

After going up 4-0, the Bulldogs secured a double-digit lead with a whopping 10 runs in the second inning. They added their last 2 in the third.

All eight of Goochland's seniors who were honored Tuesday night - Will Stratton, Chris White, Greyson Ragone, Ayden Doczi, Travis Lestyk, Andrew Jones, Mason Nuckols and Corey Vincent - had at least a hit and a run scored.

Nuckols batted 2 for 2 with 2 runs and a double. He also allowed two hits, one walk and no runs and struck out four for the win on the mound in three innings pitched and 45 pitches total.

Doczi batted 2 for 4 with an RBI and a run scored.

Jones had a hit and an RBI and scored 2 runs.

Vincent had a hit and scored a run.

Stratton, Goochland's lead-off hitter, batted 2 for 3 and scored 3 runs. He also pitched the final two innings and combined with Nuckols for the 2-hitter as he only let one Cumberland player on base on a walk. Stratton struck out three and ensured the Dukes stayed off of home plate in 25 pitches.

The senior also made a gem of a play for an out when, in a flash, he: ran down a pop-up fly east of the first base line and near the dugout; handled the ball with his bare hand; and clasped it against his glove as he slid across the ground.

The ball never left his grasp on the slide.

"As soon as it came off the bat, you knew he was going to make an effort at it - no doubt about it," Farkas said. "But not many guys make that play. He's running full-speed and has to slide - otherwise, you run straight in the dugout - and he would've done it, too. He's the kind of kid that would run into the dugout for a ball like that. He made a great play there...he's the kind of guy who's like: This play's going to be mine, and I'm not going to drop it, whether it's my bare hand or my glove."

Having missed last year due to the COVID-19 pandemic, the team is still feeling the ripple effects from not having that season, Farkas pointed out.

"Guys are kind of learning positions, they're learning their roles and responsibilities whether it's on the field or off the field," Farkas said. "It's been a learning curve for sure, but this senior class is slowly stepping up more and more each week, which is what we hoped. At the beginning of the season, these guys didn't have many varsity innings, so being able, for them, to kind of grow into that role has been really good for us."

This team's seniors are Goochland baseball's first senior class to come through on the other side of COVID, Farkas noted.

"So for them, they kind of get to make their mark of the first season back," Farkas said. "They're kind of trying to make whatever kind of impression they can make moving forward. It's almost like a restart in some ways. They've been able to get out there and show some signs of greatness, and other times, not so great. But we've learned. These guys, we're finally hitting situational hitting, we're getting some better starts from our pitchers, so those little things, we're finally getting those things."

And whether they were at the plate, or they had finished making a hit or a defensive play, or they had just watched their teammates make a good play, Goochland's players were constantly smiling or reacting joyously.

"At the end of the day I hope that's what we all do...enjoy the game when we're on the field," Farkas said with a chuckle. "I think there was a lot of smiles tonight - winning obviously helps that - but as seniors, they're running out of opportunities to play, and tonight they stepped up. They played really well."

Goochland (5-4) will play at Randolph-Henry on Thursday at 6 p.m.

Goochland's Chris White hits an RBI double in the third inning of the Bulldogs' Senior Night home game versus Cumberland on June 1, 2021.

Goochland's Will Stratton pitches in the Bulldogs' Senior Night home game versus Cumberland on June 1, 2021.