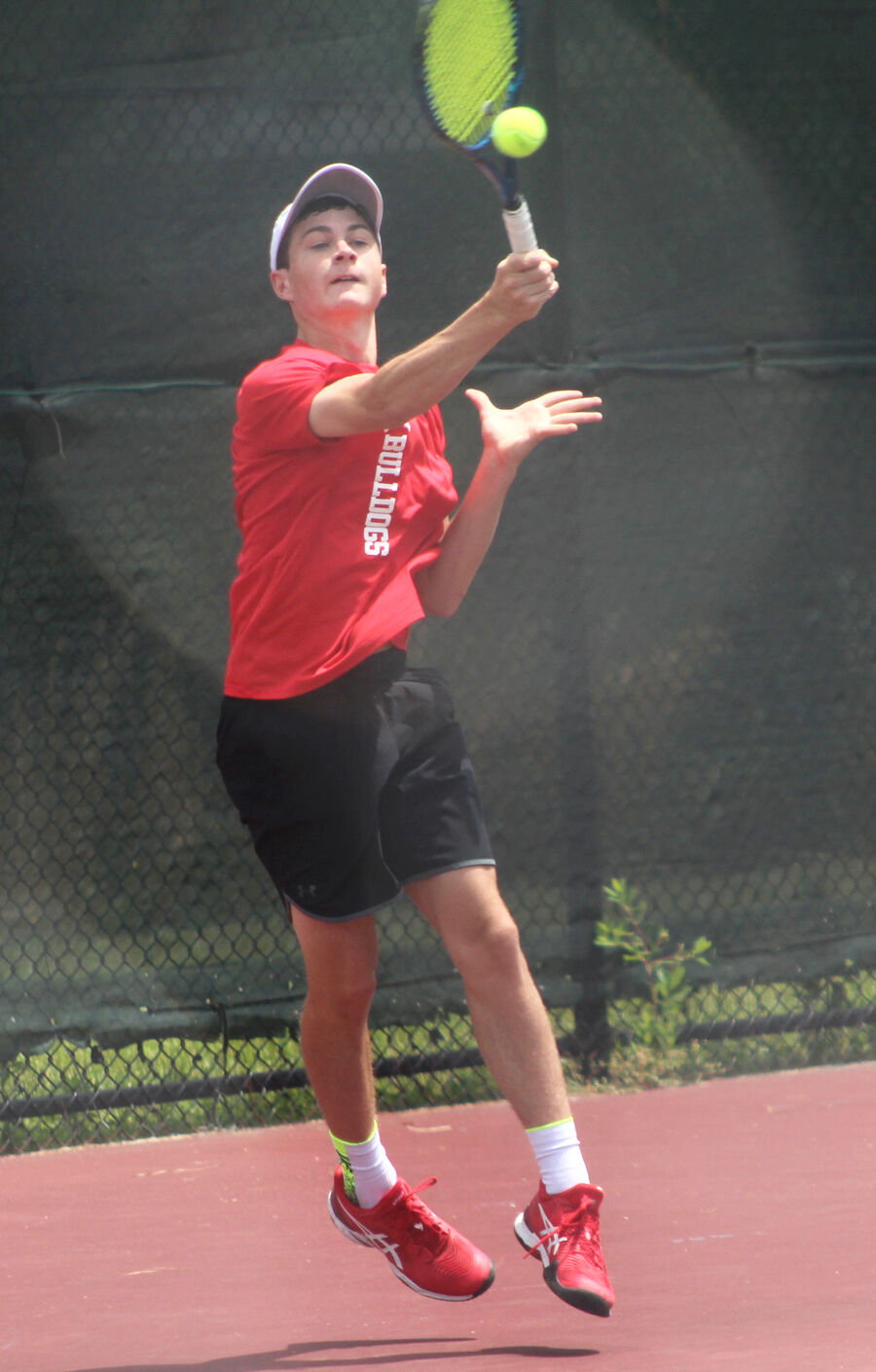 GOOCHLAND -- Evan Bernstine last year missed out on what would have been his first season on the varsity tennis courts due to the onset of the COVID-19 pandemic. But across this past year, his commitment to the game - and to improving his play - remained a daily one.

Day after day, the sophomore and younger brother of state champions and current Virginia Tech players Chase and Ryan Bernstine worked with the ball machine, focused on getting in reps, hit the ball with his brothers when they were home for the summer and played with his dad, Mark Bernstine.

Evan spoke to “really enjoying the process of getting better as a player and a person.”

That enjoyment, commitment and hard work - combined with his experience from having played since he was 6 years old - led to Evan picking up his first varsity title to date. In his first full high school season, the sophomore swept both of his regional tournament opponents on Tuesday to win the Class 3, Region B boys tennis singles championship.

Bernstine never lost a game in Tuesday’s tournament. He won 6-0, 6-0 over both Independence’s Srey Sola in the semifinal round and Lightridge’s Abhinav Maddi in the championship match.

And then he won four straight points to get back the advantage. His second point in the game saw Bernstine and Maddi trade strong groundstrokes in a long rally, through which Bernstine persevered.

After a return shot into the net led to the second of only two deuce points that Bernstine played all tournament, Bernstine returned a same-direction shot to get back the advantage point, then put away the fifth game when he mixed in a floater of a shot, and his opponent hit it into the net.

Bernstine was extremely sharp throughout the entire day when it came to mixing up his shots. That included the incorporation of drop shots, notably one on a volley to win the first set of the championship round. He also saw several of those shots land in the opponent's shallow court as winners. He noted that he’ll throw in the drop shot whenever he’s not feeling consistent from the baseline - “just throw in some variety, get my opponent moving a little bit, draw him to the net maybe.”

Bernstine’s power was also on display, as he was able to deliver high-velocity winners, including a laser of a shot to go-ahead 30-15 in the final game of the championship match.

He was able to cover the edge well against Maddi’s powerful shots in the final, and he also had two big reads against Sola in the semifinals when, twice, he hit a drop shot, then hit his opponent’s return shots over Sola’s head on two high-arching strikes that landed just inside the court near the baseline. His opponent was not able to keep either return in play.

Bernstine only lost one point in the first set of his semifinal match, with Sola getting the point while serving. All 12 of Bernstine's points while serving in that first set were won on first serves.

As he prepares for his first-ever VHSL high school state tournament, Bernstine wants to mix in a lot of serving and volleying, and he also wants to make sure his volleys are good for his Class 3, Region B doubles tournament on Thursday after he came off of a win in a doubles tournament this past Saturday.

Bernstine and teammate Adam Webb, who is in his senior season, will play their first Class 3, Region B doubles tournament match on Thursday at 9 a.m. at Goochland High School.