Goochland's Ayden Doczi, a multisport leader, is headed to VMI for football
0 Comments
Share this
1 of 2 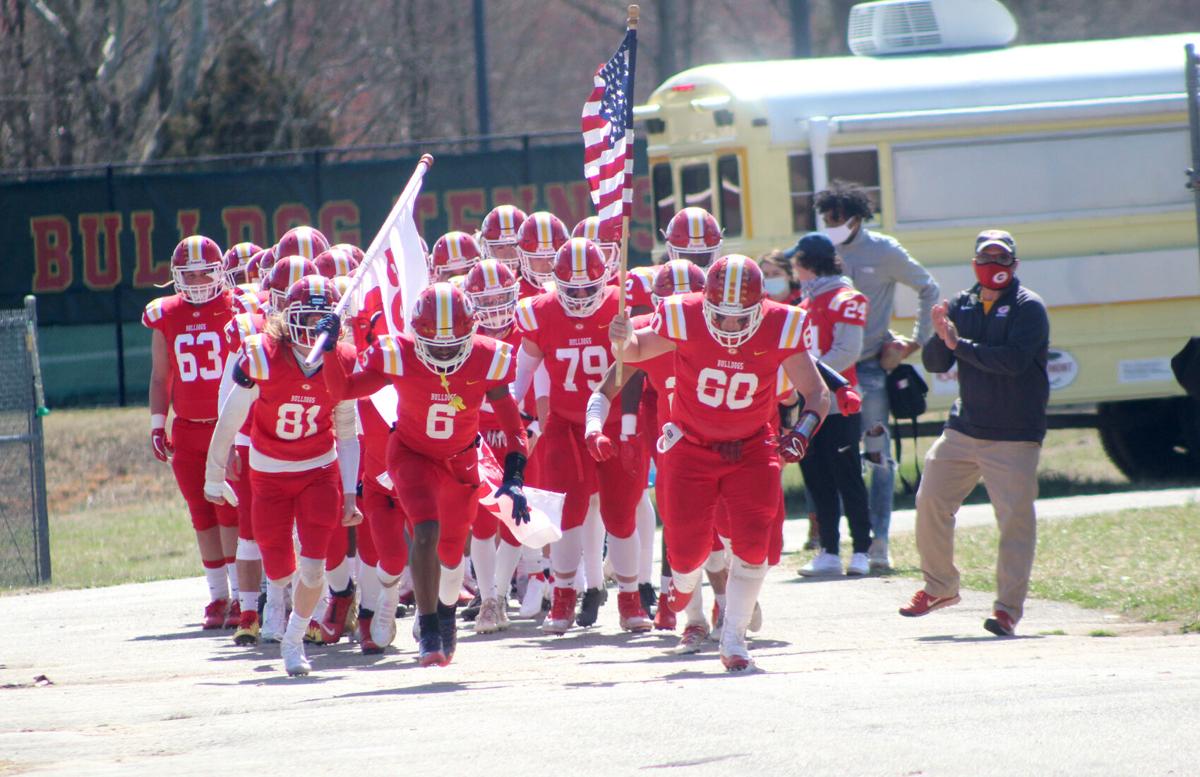 Goochland High School seniors Ayden Doczi (60) and Kayshawn Smith (6) lead the varsity Bulldogs onto the home field prior to the start of their Homecoming game versus Orange County on March 20, 2021. Doczi has committed to attend and play football for the Virginia Military Institute. 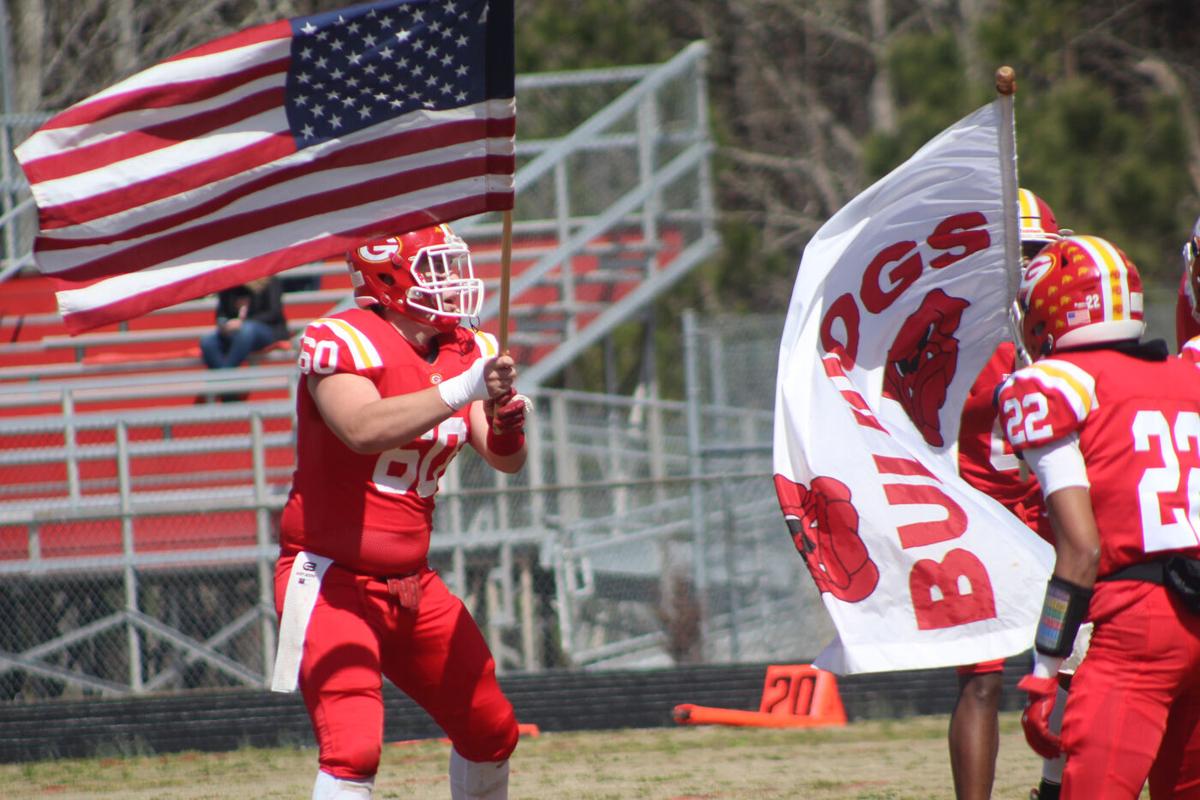 Goochland High School senior Ayden Doczi waves the American flag as he pumps up his Bulldogs team prior to the start of their Homecoming varsity football game versus Orange County on March 20, 2021.

“He asked me: ‘I realize that you’re a bigger kid, but I know you can get bigger; do you either want to get stronger or just continually be decent?’” Ayden recalled his dad asking him. “He was a very big motivational factor for me; same with my brothers…they all believed in me…when I got down on myself, they brought me back up.”

He got stronger in the weight room. He put in the field work. He felt he made a huge stride in strength in his junior year.

And when the quarantine period gripped the nation with the onset of the COVID-19 pandemic a year ago, it both hurt and helped him. He’s a very, very huge people-person – he loves talking to people, he loves being able to shake someone’s hand – but the quarantine gave him an opportunity to just grind.

His dad bought a weight set maybe 25 years ago when Ayden’s brother was just born, and Ayden brought his dad, his brothers, his mom Susan Doczi and his Goochland teammate Anthony Holland to work out with him and push each other.

It’s a now a year later, and Ayden Doczi, a three-sport standout at Goochland High School, has committed to attend and play football for VMI.

He added: “My family, as a whole, they’re very huge supporters. They have my back with this commitment because they also think it’s the best thing for me.”

He praised the brotherhood aspect of his future school at VMI, having seen what it’s done for his dad. Ayden also went into Goochland’s JROTC program, and he fell in love with the military aspect. In addition to the leadership roles he holds on all three of his athletic teams, he’s worked his way up through the JROTC program’s ranks to Company 1st Sergeant.

To say Ayden has established himself as a multisport standout would be putting it lightly. He’s a pitcher on his baseball team. He was a captain on his wrestling team and a Region 3B third-place finisher, which, in any season prior to COVID, would have qualified him for states.

Ayden currently has a walk-on offer for football from VMI. He’s being recruited for offensive lineman and long snapper, although Ayden recalled the head coach telling him that, because he can do both, “It just gives you more opportunities to get on the bus and go to the game.” The door is also open for him to play any one of multiple positions – he could move to defense, or he could drop weight and go to tight end – as he recalled the coaches telling him to “be prepared for anything.”

He’s not only getting the chance to join a program that is playing really good football right now – they’re 4-0 and No. 1 in the Southern Conference, and as of March 15 were ranked No. 19 in the country in the NCAA Division I Football Championship Subdivision – but he also felt that that’s where he could go to get the best opportunity to play both football and baseball. With the high school season coming up in late April, Ayden recalled that they said, if he were to “go out there and pitch lights-out,” they’ll give him either a walk-on offer or a partial scholarship for baseball as well.

In his sophomore year on the varsity baseball team, Ayden earned a huge start against St. Christopher’s in a 2019 regular-season game.

“I came in, and I was nervous,” said Ayden, who along with his teammates were taking on a Saints program that was coming off of a state championship in 2018 and would go on to reach the VISAA final in 2019.”I started, and I surprised myself…first inning took me a little bit to get a groove in, but I was able to get a groove, pitch the first five innings.”

While the Saints would win that game 6-2 with the help of a 4-run burst in the sixth inning, Ayden, as a sophomore, held them to five hits and two runs (one earned) and struck out three when he was on the mound. He pitched really well, and that gave him a lot of confidence.

Ayden came in as a reliever multiple times in the 2019 season, and he earned the win in his first start against Cumberland. In 2020, he pitched three shutout innings, struck out four and batted 3-for-3 in Goochland’s only scrimmage of the year. After his strong start, the onset of the COVID-19 pandemic wiped out the rest of the season, but he was able to play travel ball over the summer.

Ayden first started on the varsity football team’s offensive line in his junior year. He described the four seniors on the line as “very, very helpful.”

“That really helped me, especially for this year, because we have a very young offensive line this year,” Ayden said. “I’m able to kind of pass down that wisdom that they gave me.” He added that being a center under Connor Duncan and Justin Hawk and carrying on that legacy is “big shoes to fill, because they did a fantastic job.”

In his two-and-a-half years on varsity, he and his Goochland teammates have gone 30-3 with two regional championships, two state semifinals appearances, and one state runner-up finish after playing in the 2018 final. In addition to leading the young offensive line at the center position, Ayden is “very ecstatic” to be playing on the defensive line this spring.

Ayden has been playing football ever since he was 4 years old, and he’s been around it even longer; when he was born, his brothers were playing up through GYAA. He was also around baseball just as long. For football, he was a ball boy here and there, and his mom was the mascot in the 2012 state championship season. She’s also a substitute teacher at Goochland High School and runs the GHS Athletic Boosters program.

With football, Ayden loves that it’s a brotherhood.

Motivating him and pushing him forward along the way have been his teammates Anthony Holland and Will Stratton, who grew up with him.

“My dad considers both of them kind of like sons,” Ayden said, “and I consider them my brothers.”

In wrestling, Ayden started around third or fourth grade. He said he was the first eighth grader to come through Goochland, as well as the first to ever win a match. His high school career culminated in a stellar senior season in the 285-pound heavyweight division. He achieved a third-place finish in regionals.

“That was a really surreal moment when, in the regional tournament this year, I was like: Man, I went from an eighth grader to win a match, barely on varsity, and then able to place third in the region as a captain,” Ayden said. “I was bummed that it was over, but it was a blessing in disguise, that: Hey, I’m taking a step to my next chapter.”

He added that Coach Jeremy Wampler told him that he had a good career, and to know that, if Ayden were to ever want to come back and help, there would be a spot for him.

Wrestling was huge for the growth of Ayden’s athletic career.

Being a multisport athlete helped him see flaws in himself that he strives to improve upon to this day.

“Baseball-wise, it’s that levelheadedness, and then wrestling, it’s just: how much can you push yourself? How much can you push your teammates to strive to be better?” Ayden said. “That’s one of the reasons why I love playing multiple sports. Wrestling got me stronger; even though I did lose weight and I got a little skinnier, it made me use muscles I never thought I had before. Baseball, it’s the same thing: you use your core, everything pitching-wise: legs, arms. It gives me a little more muscular endurance in my shoulders and arms, and that’s why I’m able to use my hands in blocking and everything, especially with wrestling.”

At VMI, Ayden is looking forward to making new friends, learning what the college coaches have to give him, and experiencing a different type of football.

“I’m just excited to get there,” he said. “It’s a huge weight off of my shoulders…I know where I’m going; now I can focus on it and just get ready for that life.”

Letter to the Editor: Recent story on mask controversy did not accurately represent the facts

Goochland High School seniors Ayden Doczi (60) and Kayshawn Smith (6) lead the varsity Bulldogs onto the home field prior to the start of their Homecoming game versus Orange County on March 20, 2021. Doczi has committed to attend and play football for the Virginia Military Institute.

Goochland High School senior Ayden Doczi waves the American flag as he pumps up his Bulldogs team prior to the start of their Homecoming varsity football game versus Orange County on March 20, 2021.