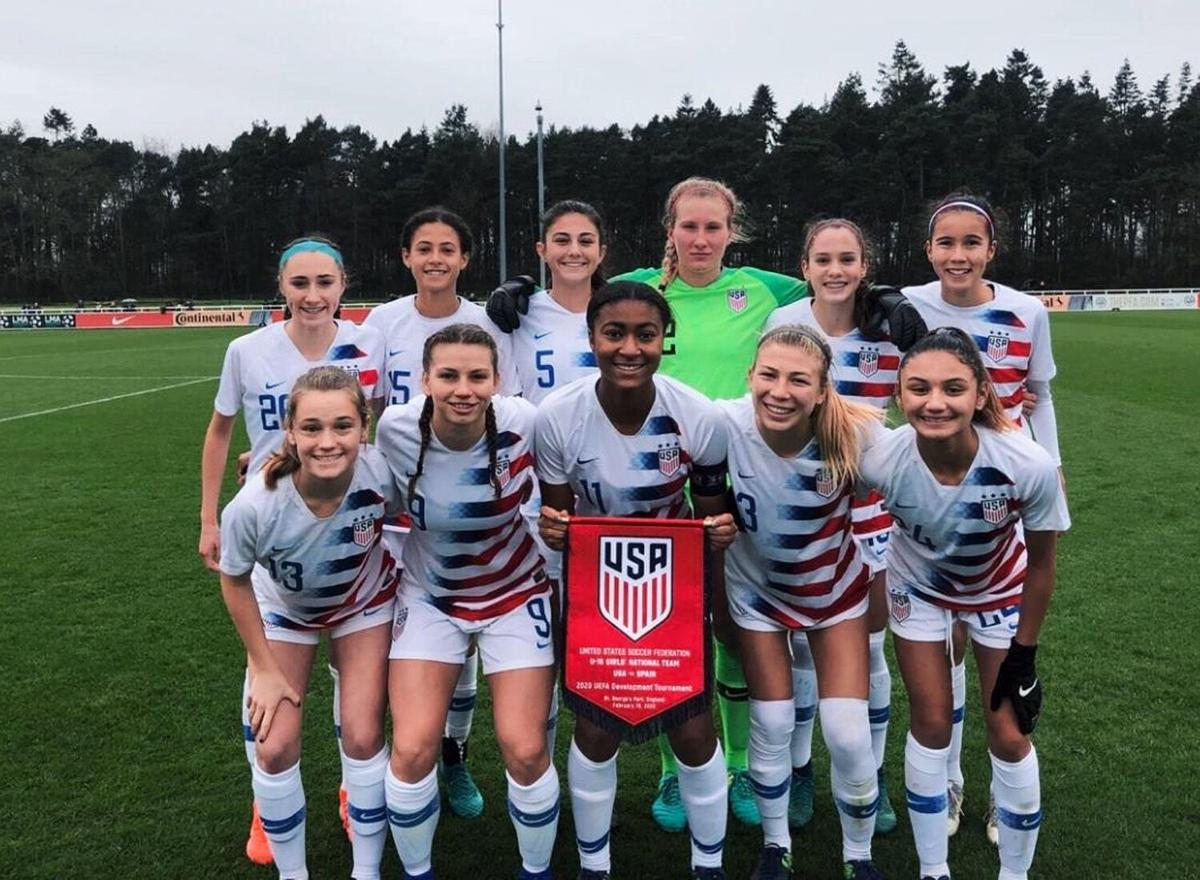 Goochland junior Jill Flammia (13), seen with her teammates on the U.S. U-16 Girls National Team while competing in the Union of European Football Associations Development tournament in England during February 2020, has committed to attend and play NCAA Division I women's soccer for the University of Virginia. 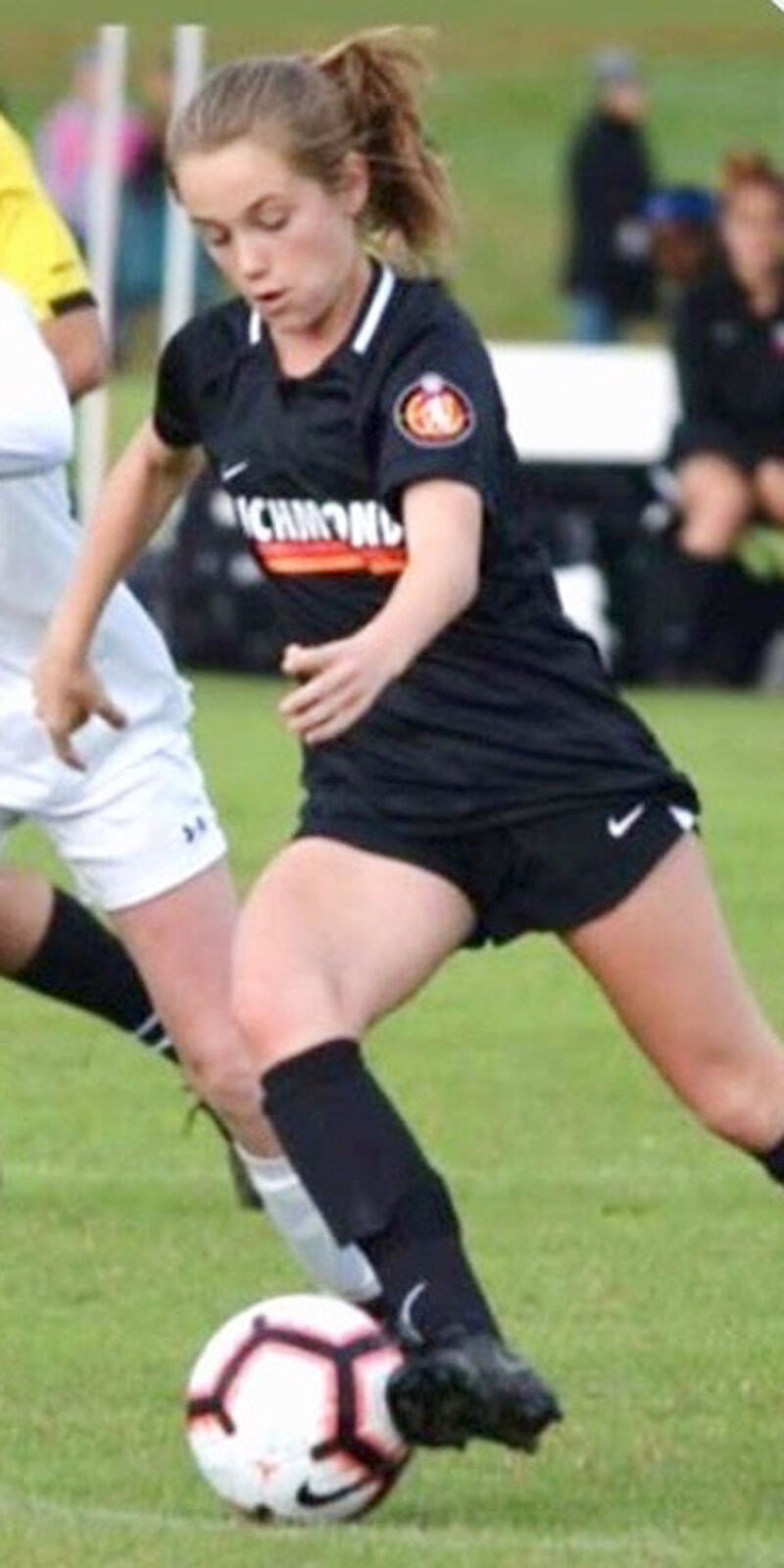 In a Feb. 23 Q&A with the Washington Spirit, Goochland’s Jill Flammia, who is in the Spirit’s Advanced Development Program, shared the most important qualities she was looking for when looking at colleges.

In addition to academics, those qualities, to Flammia, included the coach and his program. The standards of practice. The style of play. Opportunities to train and play on the United States Women’s National Team.

She saw those qualities in the University of Virginia, to whom she committed three days later.

“Making the final decision on Feb. 26 to play for UVA was a major leap for both me and my family,” said Flammia, a junior at Goochland High School. “It was a very happy day for me.”

Flammia praised UVA head coach Steve Swanson and the coaching staff, whom she said has been together for years.

“They have a great understanding of each player,” Flammia said, “and they will help each player succeed both academically and athletically.”

“I liked their high standards of practice, and the use of current technology to help me become a better player, because technology can help a lot by improving your style of play,” Flammia said. “I wanted a program that will offer opportunities to train and play with the U.S. Women’s National Team. I also wanted a program that would help me achieve my goals, and that’s playing pro in the future.”

Playing in the Atlantic Coast Conference was important to Flammia, too, because of its competitive environment.

Flammia added that playing at UVA will help her keep in touch with her family, trainers, coaches, and supporting structure.

“Plus, my family can watch all my home games,” she said, “and maybe half of my away games.”

Flammia believes that her understanding of the game both tactically and mentally help her to use her technical ability to create plays and help her team to advance to the final third of the pitch and score. She also spoke to having the abilities to play quickly, track back, play defense, transition from offense to defense, and adjust to the speed of the game.

Flammia said the recruitment process “has been very interesting and more unique than any other year.” Because of the COVID-19 pandemic, official campus visits are not being allowed at the Division I level at this time. As Flammia went through the process, some schools were closed. Others held virtual tours. Others had their soccer seasons cancelled or postponed to the spring. With the restriction on official visits moving further and further away to where it’s set to expire on May 31 of this year, Flammia had no intention of committing to any of the schools without visiting them, so what she and her family did instead was make many road trips around the country to visit them on their own.

As she began to narrow down her top schools from 10 to five to two to UVA within a span of eight months, she said: “All of the schools were patient with me and they allowed me to make my own decision on my own timeline, and I was appreciative of that.”

In February 2020, Flammia was one of 20 players who represented the United States in the U-16 girls soccer division of the Union of European Development Tournament held in England. She and her U.S. Girls National teammates won two of three games, defeating Denmark and hosting country England.

While all summer tournaments were cancelled due to COVID-19, Flammia was able to play in a Greer, South Carolina showcase in the late fall of 2020, as well as in a Sanford showcase in Florida this past January. All of the games were livestreamed, thus allowing colleges the opportunity to watch the players compete. Flammia and her Richmond United team were able to finish in the top five of the table in both showcases. They also recently finished playing in the 2021 Jefferson Cup showcase, winning two of three games.

They plan on playing in the 2021 PDA Girls College Showcase on Memorial Day weekend in New Jersey, and the ECNL national playoffs are currently slated to be held in San Diego from the end of June to early July, but Flammia said they don’t know if they will be held in San Diego for sure due to California’s current COVID-related restrictions.

The ECNL national finals will be held at the West Creek Soccer Complex in Richmond, with times and dates to be announced later in the year.

In addition to keeping up with her strength and conditioning regiments and bolstering her play through competing in the upcoming showcases, Flammia this past weekend said she is going to start practicing with the Richmond United U-16 boys’ team next week, and she plans to continue attending any and all U.S. Youth National Training Centers, with one coming up in April.

“I’m excited to be coached at the next level of my game,” she said. “I know there will be some adjustments at first, but I’m excited to contribute whenever it’s possible.”

Goochland football will take on Brentsville District in the first round of the playoffs this Friday at 7 p.m. after assembling an unbeaten rec…

Obituaries for week of April 1

For the second time since the COVID-19 pandemic began, Goochland High School seniors will be spending their graduation day at the movies.

Due to the change in Virginia Gov. Ralph Northam’s Executive Order 72, Goochland High School will be able to accommodate 500 spectators for ou…

C.J. Towles threw for 133 yards and four touchdowns, and Goochland improved to 5-0 in the six-game regular season with Saturday’s 28-12 road w…

Goochland junior Jill Flammia (13), seen with her teammates on the U.S. U-16 Girls National Team while competing in the Union of European Football Associations Development tournament in England during February 2020, has committed to attend and play NCAA Division I women's soccer for the University of Virginia.