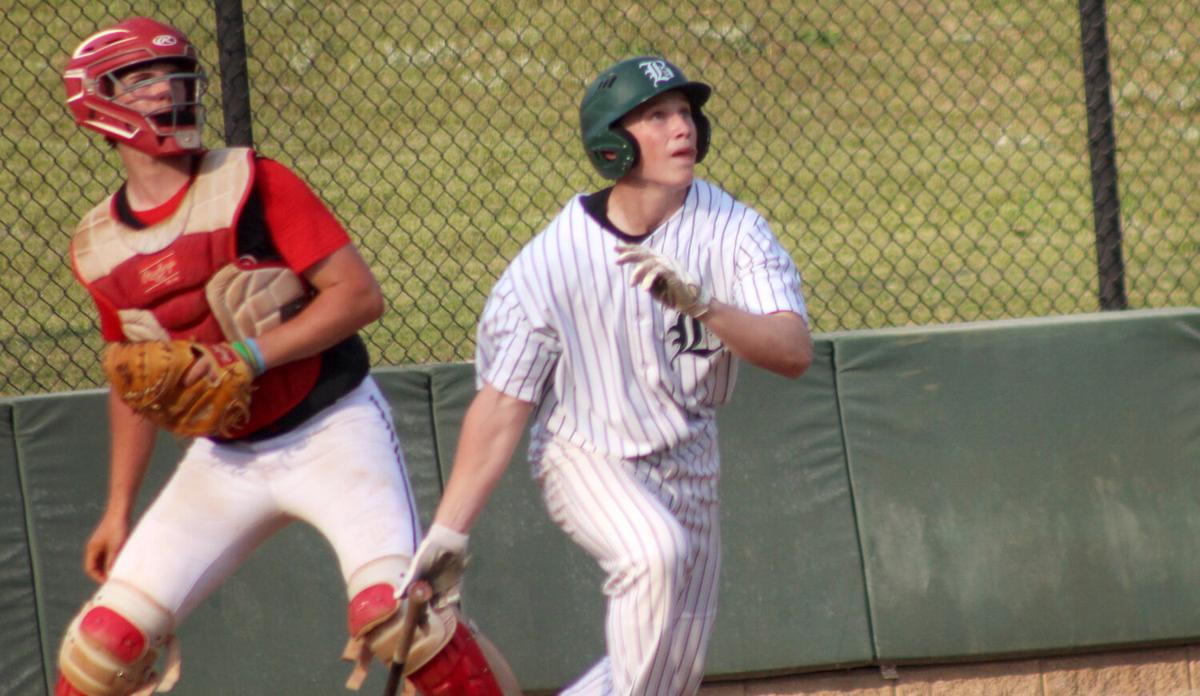 Benedictine's Wil Moore watches the ball as it leaves the park for a two-run home run in the Cadets' home varsity baseball game versus Walsingham Academy on April 7, 2021. 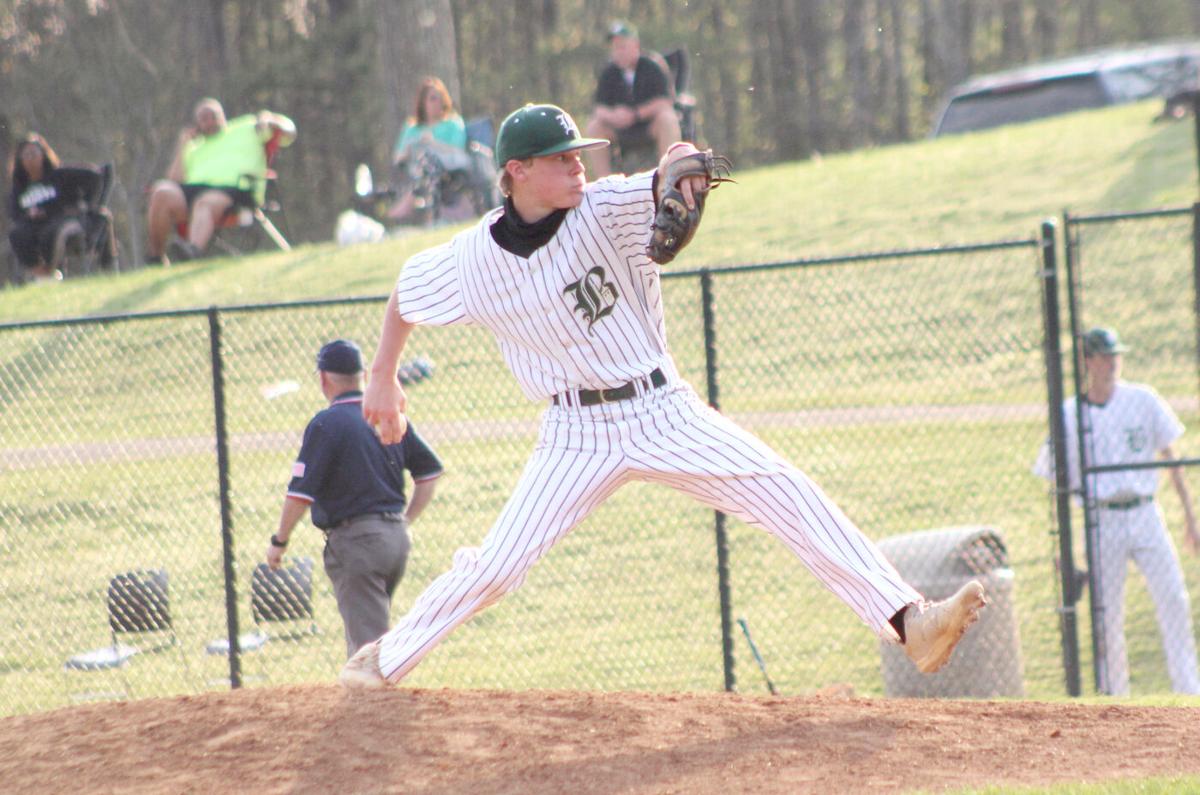 The Cadets have now won two games in as many days this week, having also shut out Collegiate 12-0 on Tuesday with the help of eight strikeouts and five scoreless innings pitched by Connor Handy and a late-game three-run homer delivered by senior and UVA signee Jay Woolfolk.

“It’s huge just to keep our momentum going,” said Benedictine coach Sean Ryan, “and Walsingham has played great all year – they were a little bit pitching-shy today because they used a bunch of pitchers against Saint Christopher’s early in the week in an 11-inning game…they went after the win in that game and they ended up tying (5-5). We knew they came in maybe not having a couple of their best arms, but…what makes them so good is: their pitchers competed.”

Walsingham’s arms limited Benedictine to a 5-1 lead until the fifth inning, when the Cadets’ bats piled on five runs in the frame to pull away.

The Cadets also had strong arms of their own, as their committee stayed sharp on the mound overall. Lingle, Hunter Zaun, and Woolfolk, who started Wednesday’s game, held the visitors to five hits and one run, with the committee’s last two hits coming in the seventh inning.

Lingle, who entered the game in the top of the third with one out on the board and two runners on base, pitched four innings altogether and allowed just three base runners on three hits in that stretch to go along with his six strikeouts on the day.

“It was just staying focused and making sure I don’t lose my mechanics or anything, and staying warm in between innings, because we had some long innings when we were hitting – just staying loose…and just making sure I stay ahead in counts, attacking hitters early,” Lingle said.

He had zero walks as he zeroed in on the strike zone.

With the pitching staff, Ryan noted: “We’re trying to get as much consistency as we can, as deep as we can.”

“What you’re seeing out of Daniel today, we’ve seen that out of four or five guys in spots,” Ryan said, “and now we’re hoping for that consistency where that becomes the norm for Daniel and for other guys to give us that depth to play three games every week, especially as we’re still trying to build Jay (Woolfolk)’s pitch count up.”

Woolfolk struck out four batters in 2.1 innings pitched. He also made a swift 1-2 play in the third inning when he fielded a bouncing comebacker hit by the batter and zipped it to Sam Saunders behind the plate to get out a runner heading home. Woolfolk also scored two runs on offense.

Woolfolk contributed to Benedictine's 2019 state championships in both baseball and football and is among the players who recently joined the baseball team for this season following the football team's games that were held this spring.

The team anticipates that Woolfolk will be able to pitch deeper into games this season as he gets more and more time to throw.

“And when you can start your rotation with that kind of arm, you’re already blessed with that,” Ryan said.

Moore, who on Tuesday drove in two runs versus Collegiate, batted 2 for 3 with three RBI, two runs, and his two-run homer against Walsingham. Moore, also among the football players who came over, was facing a 1-1 count against one out in the bottom of the third inning when Joey Masiak threw him a fastball low and in.

“My approach was just: stay up the middle and try and hit a line drive up the middle because I was early in the first at-bat,” Moore said, “and then I kind of went out in front and barreled it to right.”

Moore’s blast carried the ball over the right-field wall to extend the Cadets’ lead to 5-1 and help get the offense rolling.

“He’s just getting out here again, and so you’re waiting to see: when do those guys hit their midseason form?” Ryan said. “What we’ve talked a little bit about is just trying to get those guys as many cuts as we can because we figure: every cut that they get, every at-bat that they get right now, that gets them one step closer to midseason form. We’re just having to do it in a compressed time cycle – they didn’t have the four of five weeks before the season, and they didn’t have the first three weeks of the season, so we’re really trying to consolidate that.

“Hopefully, once these guys are out here more and more, we just get that consistency and depth in the lineup, just like the rotation,” he added. “We’re looking for as much depth as we can have.”

Corey Adams, who also drove in two runs versus Collegiate, batted 2 for 3 with a double and two runs scored against Walsingham.

Victor Johnson, who on Wednesday also batted 2 for 3 while adding two RBI, put the Cadets on the scoreboard first with his double in the second inning to bring home Nick Neighbors, who had reached base with a double of his own. Sam Saunders made it three doubles in the frame for Benedictine when he plated Johnson and reached third base on a fielder’s miscue.

Hank Carpin added an RBI double in the third inning.

Benedictine (6-3) is currently slated to host Collegiate on Friday at 4:30 p.m.

GOOCHLAND – After opening the season on a pair of hard-fought out-of-district games against Chancellor and Collegiate, Goochland’s experience-…

GOOCHLAND -- Playing their best first half at this point of the season according to the coaches, Goochland boys soccer unleashed six goals in …

Virginia High School League’s spring sports are now under way, and Goochland’s boys tennis team, after waiting more than a year to get back on…

I’ve often wondered what could have possibly motivated parents with the last name Dover to name their male offspring Ben or their daughter Eileen.

Benedictine's Wil Moore watches the ball as it leaves the park for a two-run home run in the Cadets' home varsity baseball game versus Walsingham Academy on April 7, 2021.