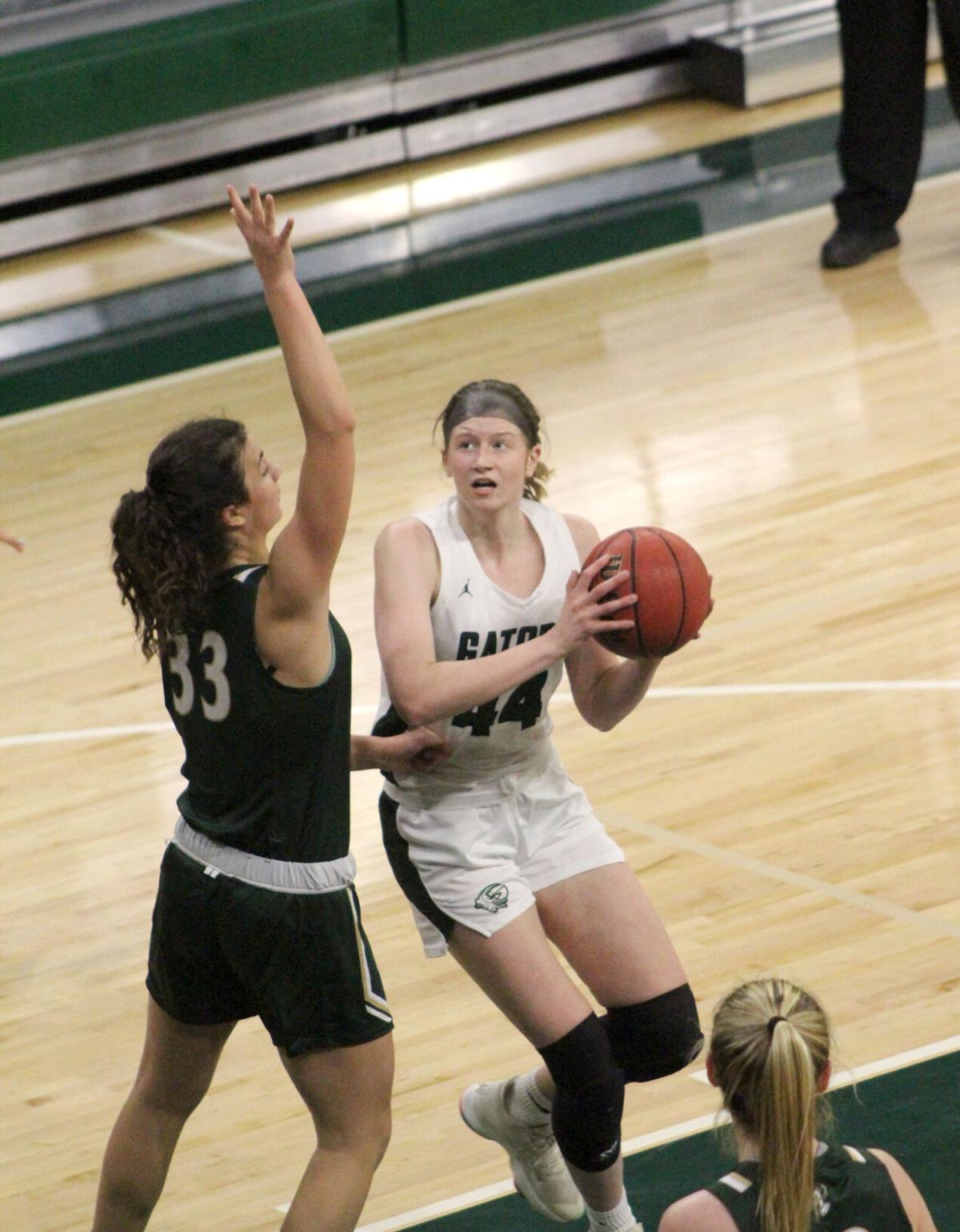 Saint Gertrude junior Kate Samson, seen setting up for the layup in the paint in a home game versus Catholic on Dec. 15, 2020, committed to attend and play for the United States Naval Academy in November. Samson on Tuesday scored a team-leading 19 points in Saint Gertrude's 61-37 win over Catholic. 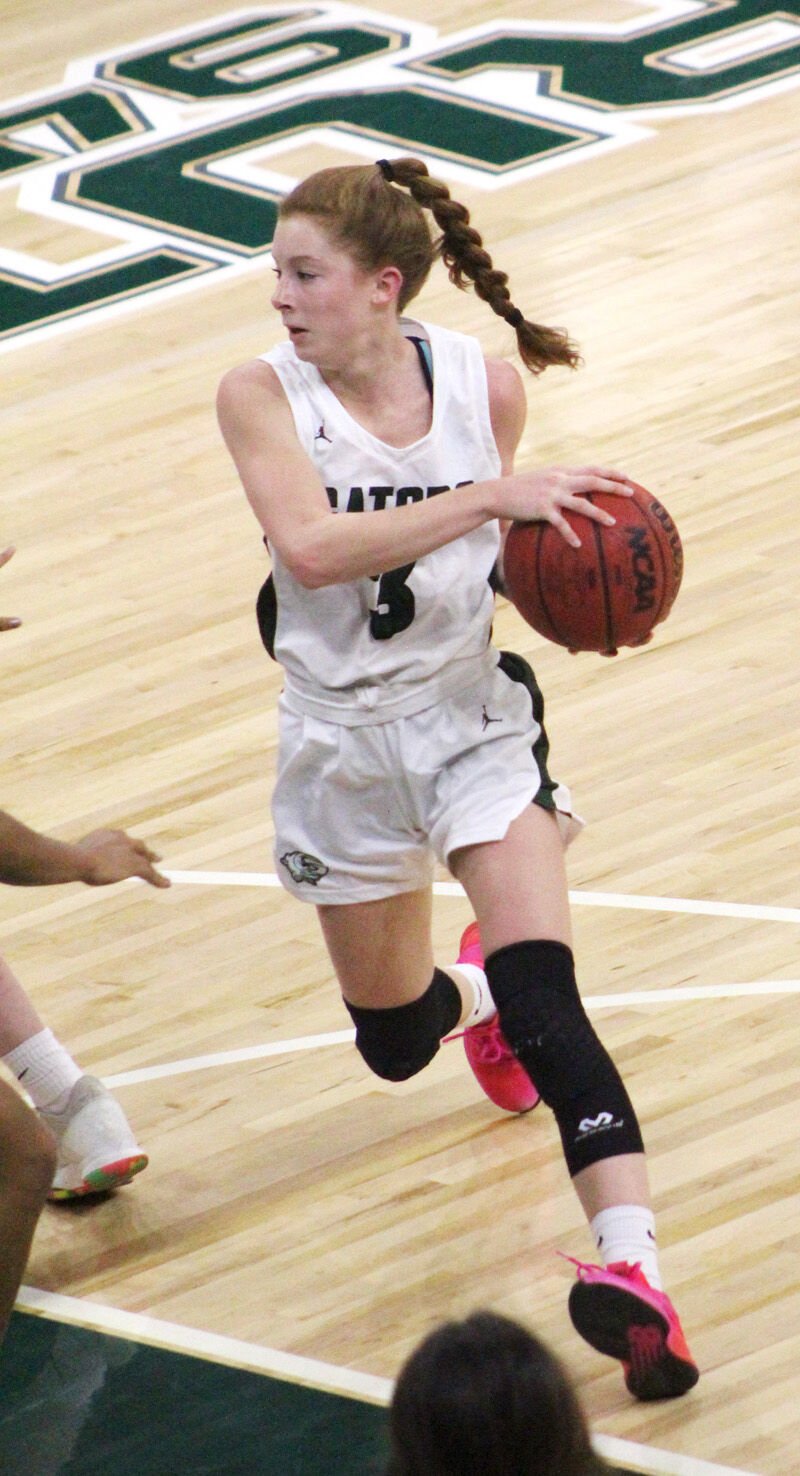 Nan Kerner readies the pass to a teammate in Saint Gertrude's home game versus Catholic at Benedictine's McMurtrie-Reynolds Pavilion on Dec. 15, 2020. 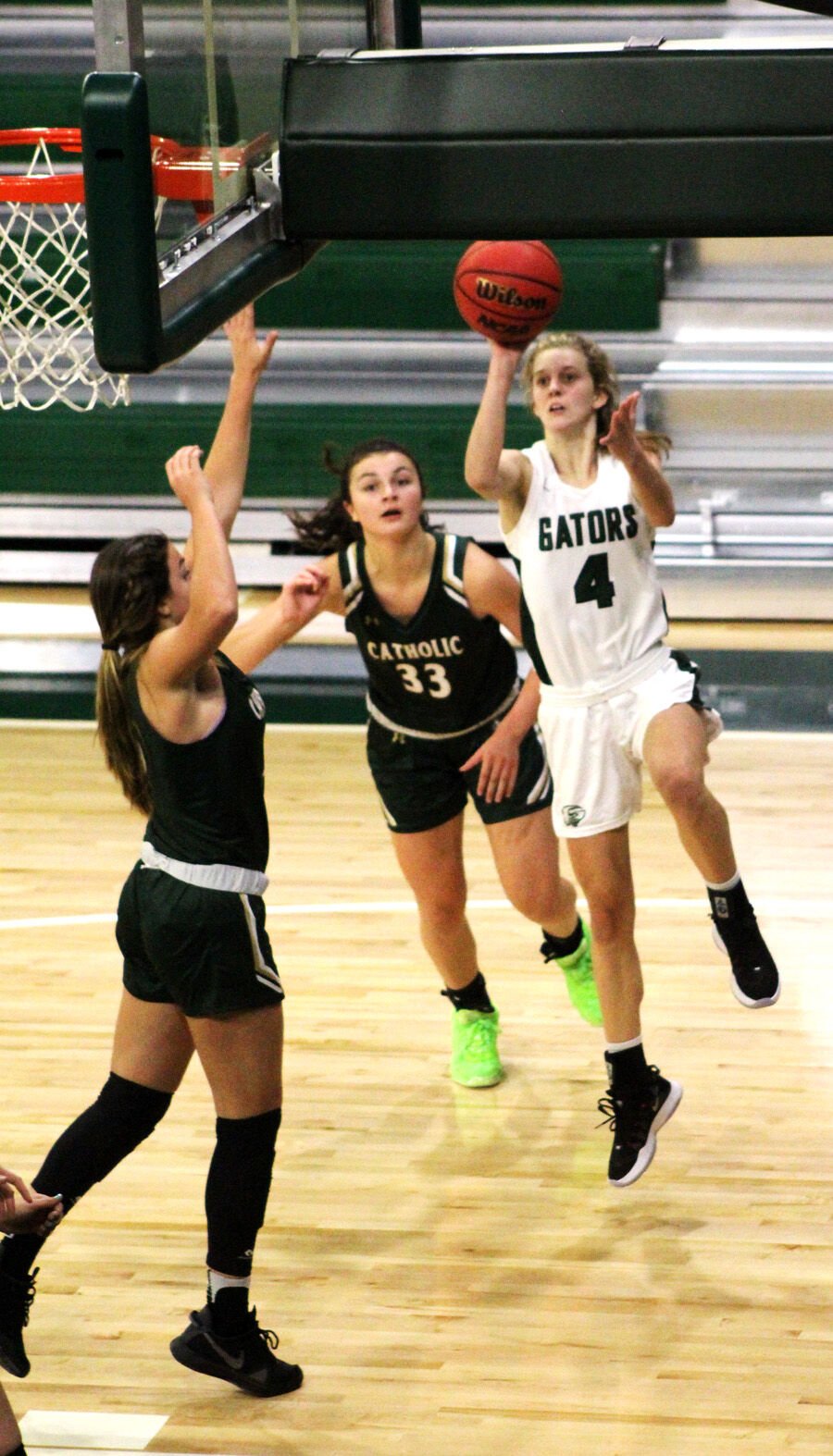 Erin Woodson (4) goes for the layup in Saint Gertrude's home game versus Catholic at Benedictine's McMurtrie-Reynolds Pavilion on Dec. 15, 2020. 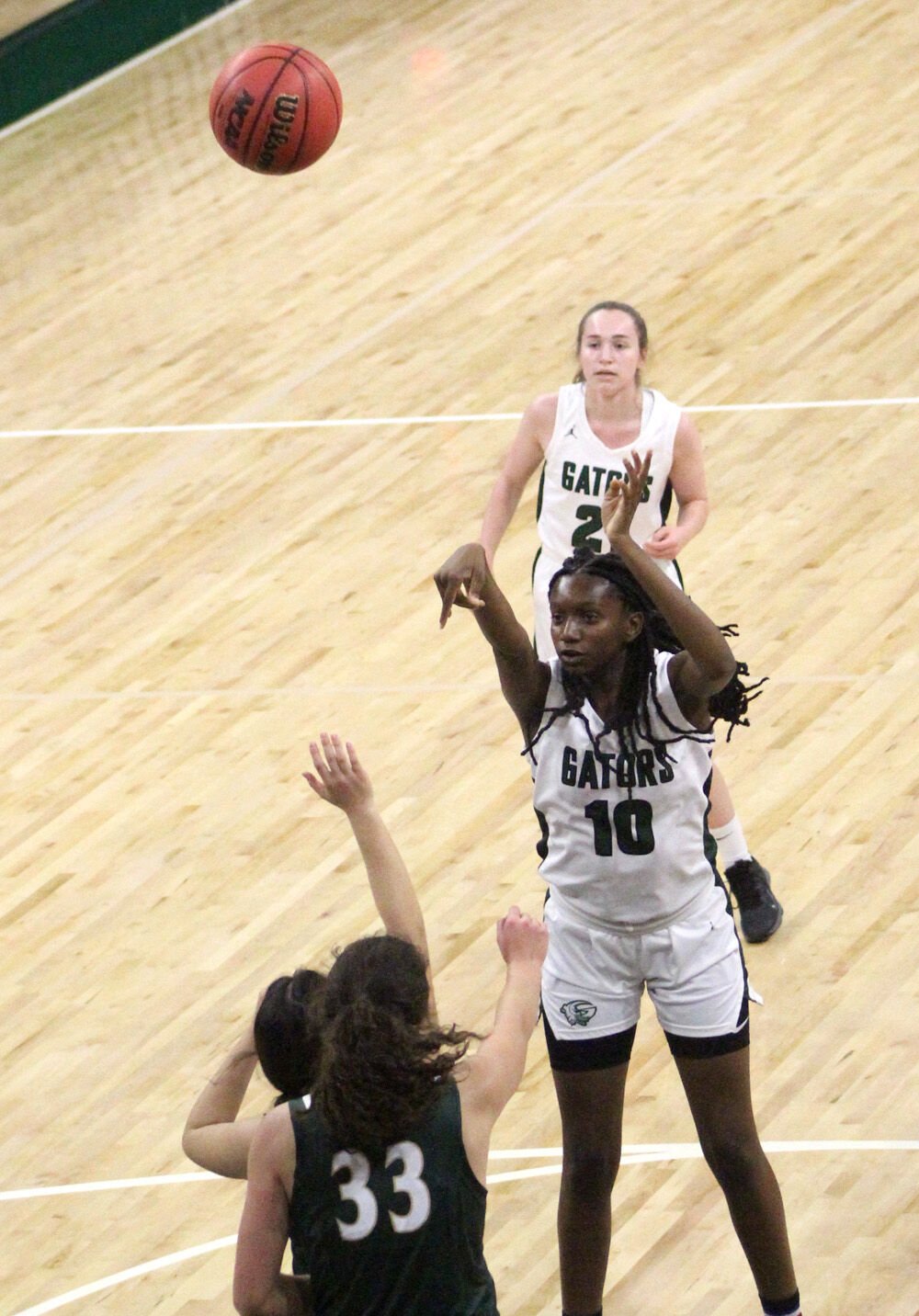 It’s been a tough year, but amidst these difficult times, many athletic teams have still been able to build good memories together – and make history while doing so.

Saint Gertrude’s girls basketball team stands among them. The Gators earned back-to-back wins in the first-ever two games at Benedictine's brand new gymnasium, the McMurtrie-Reynolds Pavilion, with commanding performances in both contests. After they routed Central Virginia Homeschool 90-30 in their opener the previous week, they defeated Catholic 61-37 on Tuesday behind 19 points from 6-foot-4 junior Kate Samson.

“I’m super proud of our team today. We knew this was going to be a difficult game,” Samson said. “I think we did a really good job adjusting defensively. We’re working really well in communicating on defense and switching on screens and talking it up. I’m really proud of how it turned out today.”

Head coach Robyn D'Onofrio said they played exceptional defense, were very communicative with one another and worked together in unison.

“I thought that our girls did a great job of making sure that they were always helping each other,” D’Onofrio said. “It’s something we prioritize in practice and they really put it to work today.”

The Gators were in sync from the start, with Samson able to convert early assists from her teammates, senior Nan Kerner and 6-1 junior Cherese Lampkins, into points, and Kerner and Samson combining for a 9-0 run in the second quarter to put the Gators ahead for good after Catholic tied the game at 14-14. Lampkins added a putback at the end of the first quarter.

Samson, who in November committed to attend and play basketball for the United States Naval Academy, netted 15 points in the first half alone. Kerner contributed 12 overall and the two players together scored 29 of the team’s first 33 points, opening the door for their teammates to flood the basket in the second half and further bolster the home team’s lead.

“They both have such great strengths and one of the nicest things is they adapt their games so much to what’s happening around them, and…being supported by such other strong offensive forces, other shooters and other post players, just really makes it difficult to defend us,” D’Onofrio said. “A game plan is tough when you have five strong players on the floor at one time. We’re very blessed in that regard.”

Sophomore Erin Woodson netted 10 of her 12 points in the third quarter, and sophomore Sam Smith netted all 8 of her points, including 6 on three-pointers, in the fourth.

Saint Gertrude improved to 2-0 while Catholic (2-1) took its first loss of the young season.

“I think they’re a very well-coached team, they execute very well, they’re disciplined, they’re always a strong team. Coach [Larry] Bowman runs a great program,” D’Onofrio said of Catholic. “They are conditioned, they’re ready to go and they’re eager to play, too. All the girls, everyone that we’re playing is just really happy to be there, so it’s just a great, competitive environment.”

The Gators’ next home game will take place on Saturday, Dec. 19, at 4 p.m. versus Saint John Paul the Great Catholic at the McMurtrie-Reynolds Pavilion.

“I look forward to being here – I’m grateful that our administration, our president and our director of athletics is doing everything possible to make everything happen for us – and to be safe in a great environment,” D’Onofrio said. “We’re just very lucky, and grateful for the chance to be able to do it.”

“It means a lot that they would give us the opportunity to use [the new gym] and it’s just been really awesome that we can play in it, especially with all the COVID procedures,” Samson said. “I think everyone’s doing a great job of being safe. Just the fact that I can have my junior year in here, it means a lot, and same for the seniors. They’re really happy that they can be in here for this year.”

Saint Gertrude junior Kate Samson, seen setting up for the layup in the paint in a home game versus Catholic on Dec. 15, 2020, committed to attend and play for the United States Naval Academy in November. Samson on Tuesday scored a team-leading 19 points in Saint Gertrude's 61-37 win over Catholic.

Nan Kerner readies the pass to a teammate in Saint Gertrude's home game versus Catholic at Benedictine's McMurtrie-Reynolds Pavilion on Dec. 15, 2020.

Erin Woodson (4) goes for the layup in Saint Gertrude's home game versus Catholic at Benedictine's McMurtrie-Reynolds Pavilion on Dec. 15, 2020.