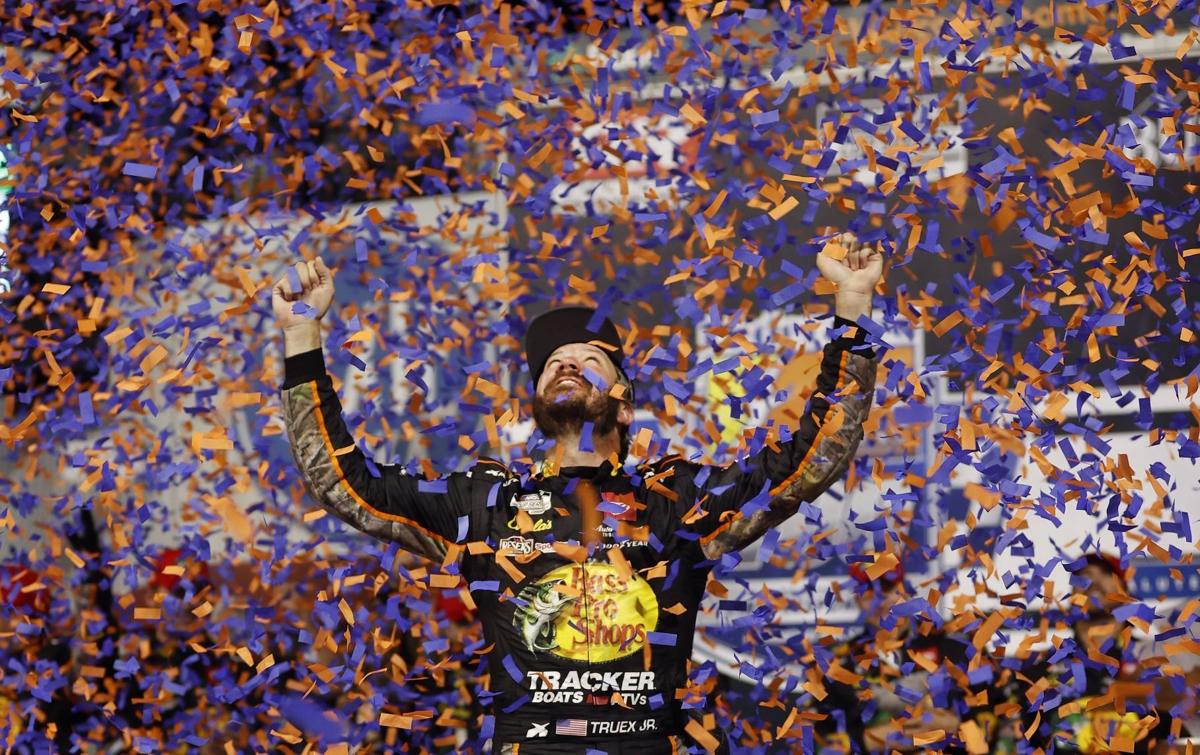 Martin Truex Jr. celebrates in victory lane following the Federated Auto Parts 400 NASCAR Cup race. The win was his third at Richmond Raceway in his past five starts. 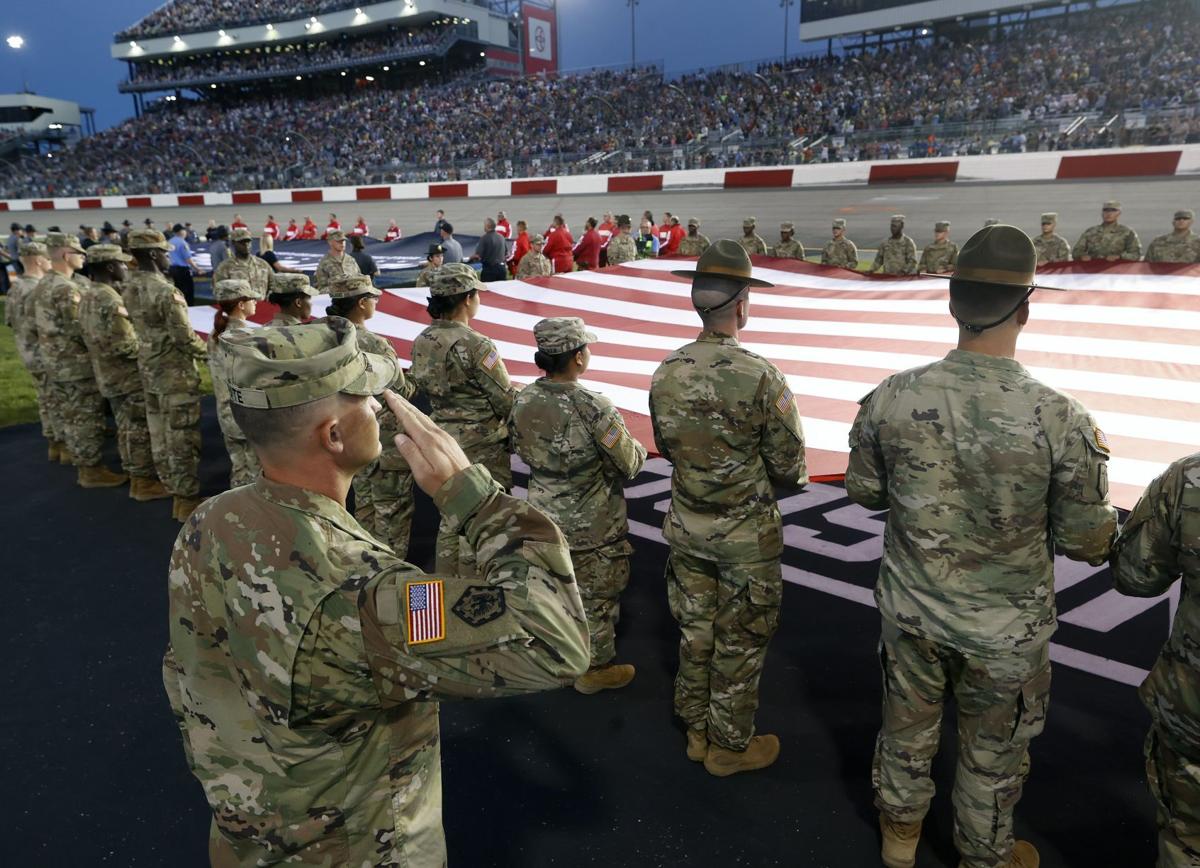 Staff Sgt. Joshua Pate, who is stationed at Fort Lee, saluted during the national anthem at Richmond Raceway on Saturday. The track presented a Salute to First Responders before the start of the Federated Auto Parts 400. For more 9/11 coverage, see Page B1. For more NASCAR coverage, see Page C1. 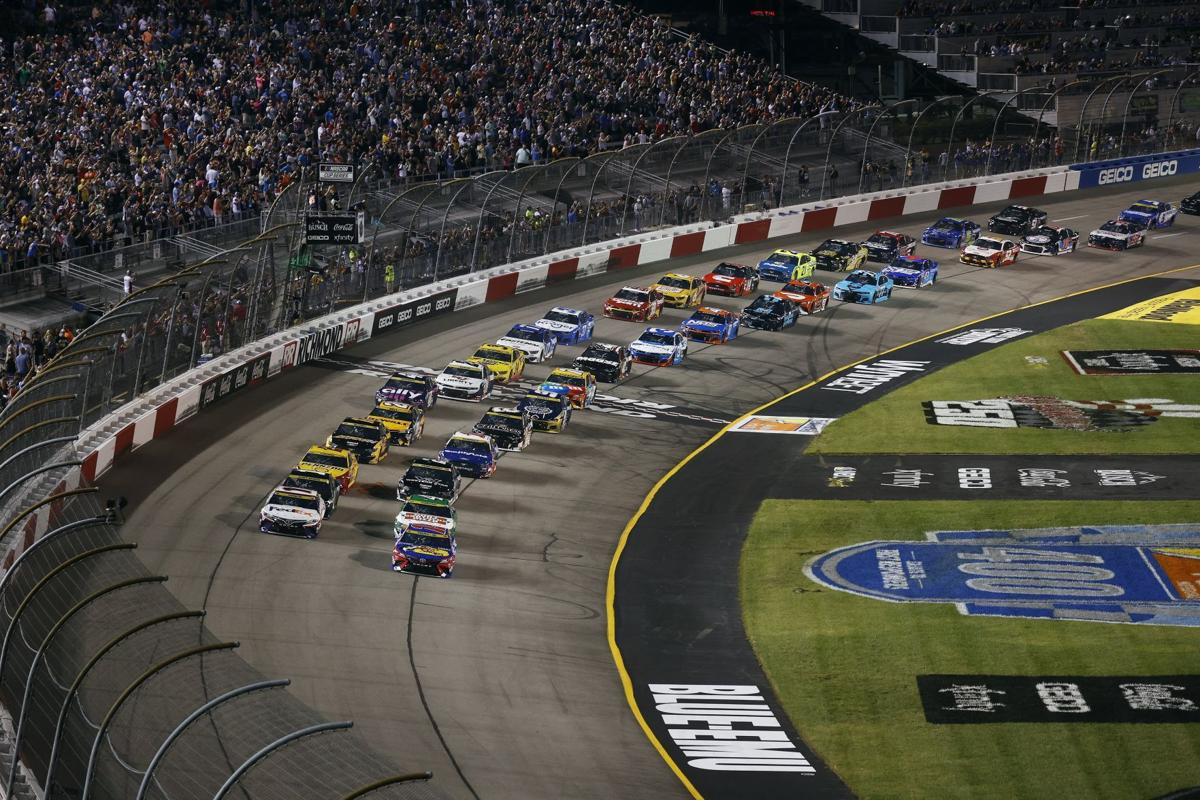 RICHMOND – After a hot start to the season that saw him win three of the NASCAR Cup Series’ first 12 races in the 2021 regular season, Martin Truex Jr. reasserted himself as one of the championship favorites when he overtook Joe Gibbs Racing teammates Denny Hamlin and Kyle Busch in the final stage and went on to win the Federated Auto Parts 400, the second race in the opening Round of 16 in the Cup Series’ playoffs, at Richmond Raceway Saturday.

Truex and Chesterfield native Hamlin, who took second in the race and won at Darlington last week, are both locked into the Round of 12.

Christopher Bell made it a 1-2-3 finish for Joe Gibbs Racing for the second time in three seasons at Richmond Raceway in the Cup Series. Chase Elliott bounced back from a rough pit stop in the second stage to place fourth and Joey Logano rounded out the top five.

Kyle Larson, who started the race in the back because of failing prerace tech twice, rose through the field before settling into sixth. Ross Chastain was the highest-placing non-playoff driver with a finish of seventh.

Kevin Harvick, who consistently rode in the top 10 throughout the entire night, came home eighth.

Kyle Busch early in the race was penalized for equipment interference when a tire on his pit stop got away from his crew and rolled into another team’s pit stall. He bounced back, briefly leading before falling behind Truex with less than 60 laps to go, and then losing multiple spots on a penalty for speeding on pit road. He ultimately salvaged a ninth-place run to put all four JGR Toyotas inside the top 10.

Ryan Blaney rounded out the top 10.

After going winless in the first 80 short-track races of his Cup career, Truex has now won six of the last 13, including three of the last five races at Richmond. All four of Truex’s Cup wins this year have come on racetracks that utilize the 750-horsepower package. The series will revisit two of the four tracks where he’s won: Martinsville for the penultimate race and Phoenix for the championship race.

Truex got black-flagged in the opening circuits after beating Hamlin, the leader for the start of the race, to the start-finish line.  Truex had to serve the penalty on pit road, but the competition caution helped him regroup with the field, and he proceeded to work his way up to eighth place by the end of Stage 1, which was won by Hamlin.

The Stage 2 lead bounced between Hamlin and Chase Elliott, but an issue on the pit stop with less than 60 to go in the segment knocked Elliott outside of the top 10 and initially put him a lap down. Hamlin from there was able to complete the stage sweep uncontested.

In the early part of the final stage, Truex overtook Hamlin on lap 268, and then traded the lead with Kyle Busch on consecutive pit stops before holding off a hard-charging Hamlin across the final 54 circuits.

“It’s an important day in our history, and I think all of us here, we’re proud to win, and this car’s amazing, and there’s so many people to thank, but what a day to win on. It reminds you the honor it is – the privilege it is – to get to come out here and do this,” Truex said in his televised postrace interview. “We couldn’t do any of these kind of things without the men and women that take care of us and all the first responders, police officers, firefighters, the military – you name it. NASCAR’s very patriotic, we’re very proud…very proud of everybody to be able to do this today.”

The four drivers currently below the cutline in 13th through 16th are Bowman, Reddick, Byron and Michael McDowell.

The Round of 16 wraps up next Saturday with the Bass Pro Shops Night Race at the half-mile oval of Bristol Motor Speedway. The race will air on NBCSN at 7:30 p.m.

Nick Vandeloecht is sports editor of Powhatan Today and Goochland Gazette. He can be reached at nvandeloecht@powhatantoday.com.

Letter to the Editor: Recent story on mask controversy did not accurately represent the facts

Martin Truex Jr. celebrates in victory lane following the Federated Auto Parts 400 NASCAR Cup race. The win was his third at Richmond Raceway in his past five starts.

Staff Sgt. Joshua Pate, who is stationed at Fort Lee, saluted during the national anthem at Richmond Raceway on Saturday. The track presented a Salute to First Responders before the start of the Federated Auto Parts 400. For more 9/11 coverage, see Page B1. For more NASCAR coverage, see Page C1.