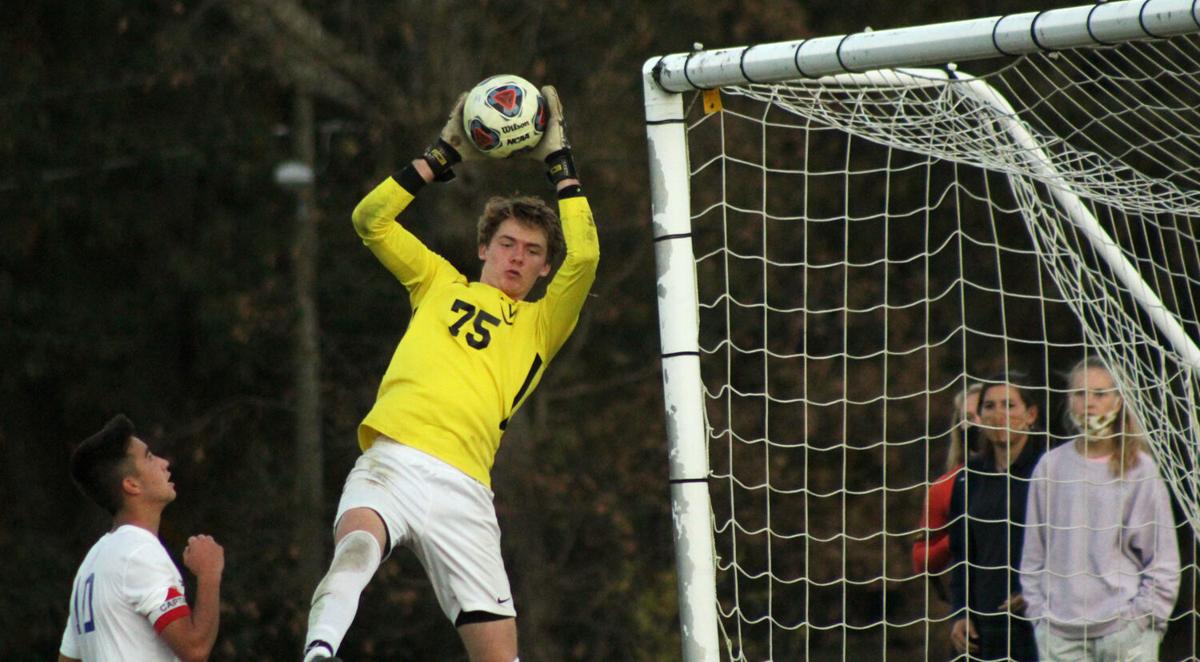 Goochland's Alden Sweeney leaps up for a save for Veritas in the Lions' Senior Night home game versus Fork Union Military Academy. Sweeney, a senior, hasn't allowed a goal all season. 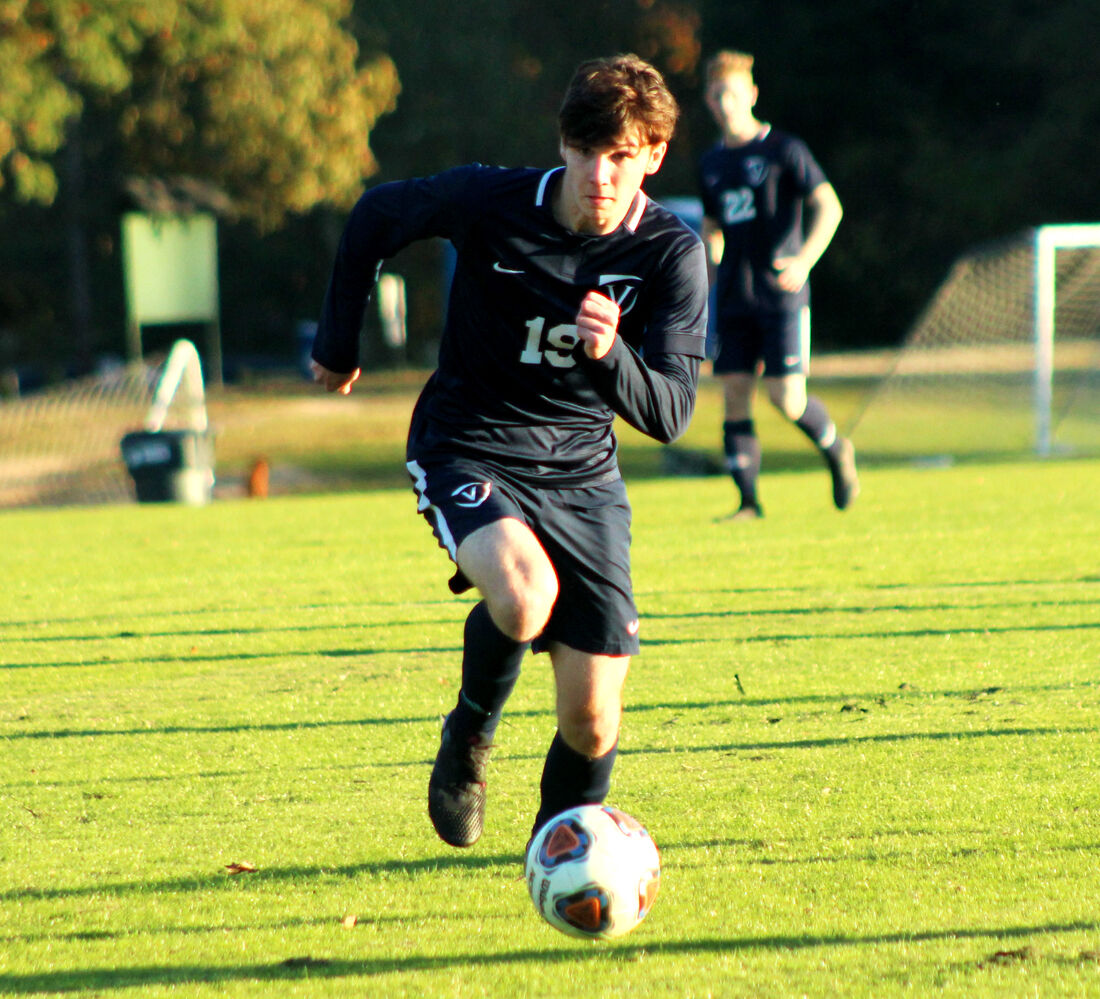 Veritas' Jack Butler gets ready to score the decisive goal in the Lions' 1-0 win over Fork Union Military Academy on Nov. 4, 2020. 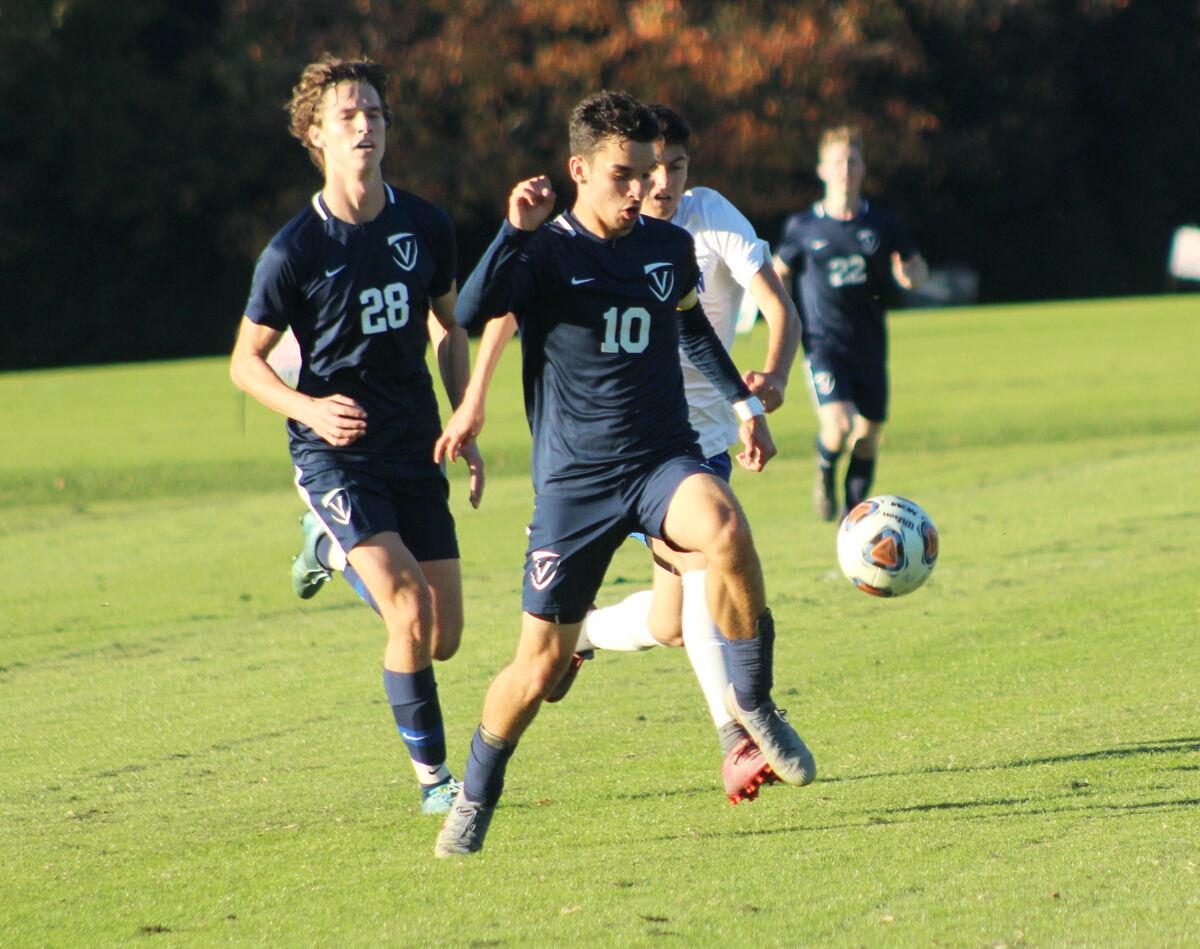 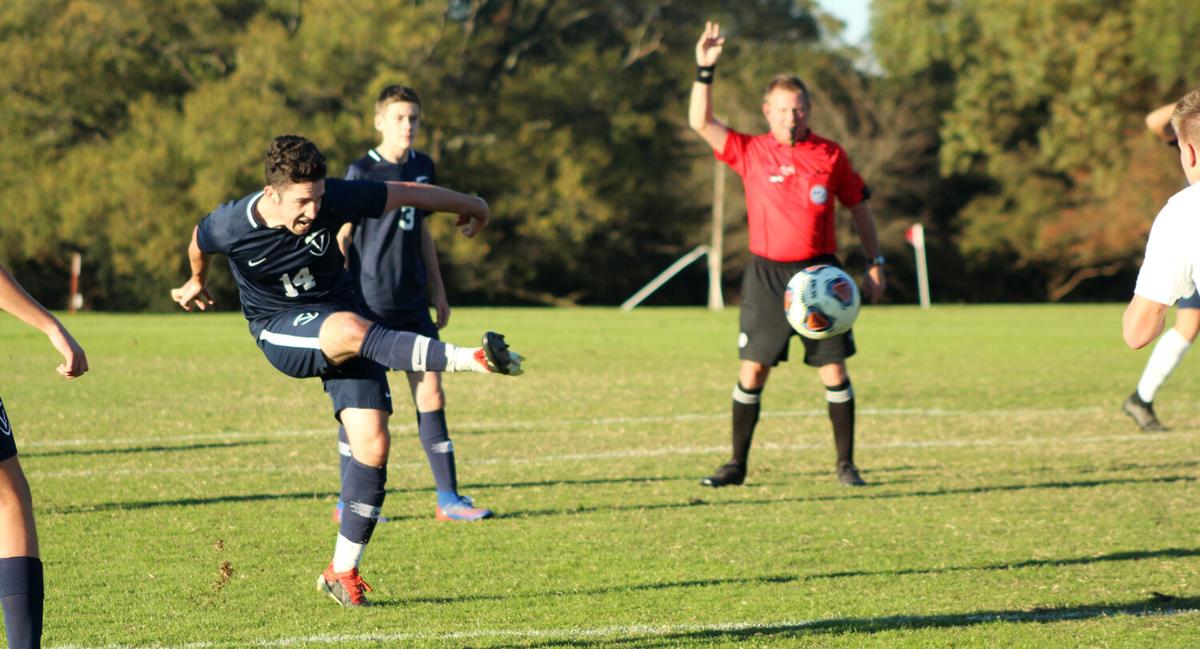 Sweeney has started in goal for the boys soccer team the last four years.

Jastrzemski, on the other hand, hadn’t played on the team since he was a freshman.

Both players this year were pivotal to Veritas’ successes.

And both were honored alongside their teammates Jack Butler, Stephen Edds and Daniel Ludovico on Wednesday’s Senior Night, which was not only significant in that it capped a condensed but dominant 11-man 2020 campaign for Veritas.

It was also important for just being able to take place along with the fall season – something that, because of the COVID-19 pandemic, can no longer be seen as a guarantee.

“It has really been a good outlet – a really positive thing. To come out and to play a game that we love, and to be with people that we love being around – and we support each other – has just been a gift in the midst of some tough times,” said Sterling Sweeney, who has coached Veritas’ girls soccer team for years and took the helm of the boys team for the first time this fall. “It’s just been a gift to me; it’s been a gift to these guys. We push each other hard, but they’re sweet with each other, though, too. They just support each other and encourage each other a lot.”

Veritas ended up getting to play about half of its normal schedule, toughing out wins against teams like Benedictine (2-0) on Oct. 6 and again (1-0) on Oct. 30, New Covenant (3-0) under the lights on Oct. 23 and Fork Union Military Academy (1-0) on Wednesday night.

It was Butler who, with a run towards the left corner, angled the ball across and into the right-corner netting of the goal to put his team in the lead in the second half against F.U.M.A.

Coach Sweeney called Butler “one of the most dynamic players Veritas has ever had, and praised him as an “unbelievable teammate and “unbelievable player.”

In one of Veritas’ earlier games against F.U.M.A., Will Garrison, who is relatively new and hasn’t gotten a lot of playing time, delivered what might go down as Sweeney’s favorite moment of the season when he scored a goal, and his team, Sweeney recalled, “just went bananas.”

“It was just this really cool team moment,” Sweeney said.

Owen Godfrey, whom his coach praised as a “goal machine,” delivered two hat tricks in the season and earned the team’s offensive player of the year honors.

Jastrzemski, in his return to the game his senior year, was named the team’s most improved player. Sweeney called him “an unbelievable addition to this team in every way imaginable.”

And for Alden, his coach and players affectionately held their hands together in the form of a zero, honoring the four-year senior goalie who never got scored on this season.

Alden was named the team MVP.

“He is just a big difference-maker for us,” Sweeney said of his son Alden, who has started in goal since his freshman year and is hoping to play college soccer. “We can just count on him back there and then we can focus on trying to score, because we feel pretty good that he’s going to keep it out.”

Veritas will close the season with a 9-vs.-9 matchup this Friday at Collegiate.

The art of kindness

A little bit of everything

For over seven decades, A.G. Smith Jr. and Company general store was a Goochland mainstay

Obituaries for week of Nov. 19

“Almanzo ate the sweet, mellow baked beans. He ate the bit of salt pork that melted like cream in his mouth. He ate mealy boiled potatoes, wit…

GoochlandCares has received a charitable contribution of $100,000 from Larry Page, Tanner Hulette, and The Page Auto Group. The gift will fund…

Goochland United Soccer Association’s U14 coed team closed out the 2020 fall regular season with a half to remember.

Biden’s act of courage did not go unnoticed

Joe Biden is my hero.

Goochland's Alden Sweeney leaps up for a save for Veritas in the Lions' Senior Night home game versus Fork Union Military Academy. Sweeney, a senior, hasn't allowed a goal all season.

Veritas' Jack Butler gets ready to score the decisive goal in the Lions' 1-0 win over Fork Union Military Academy on Nov. 4, 2020.