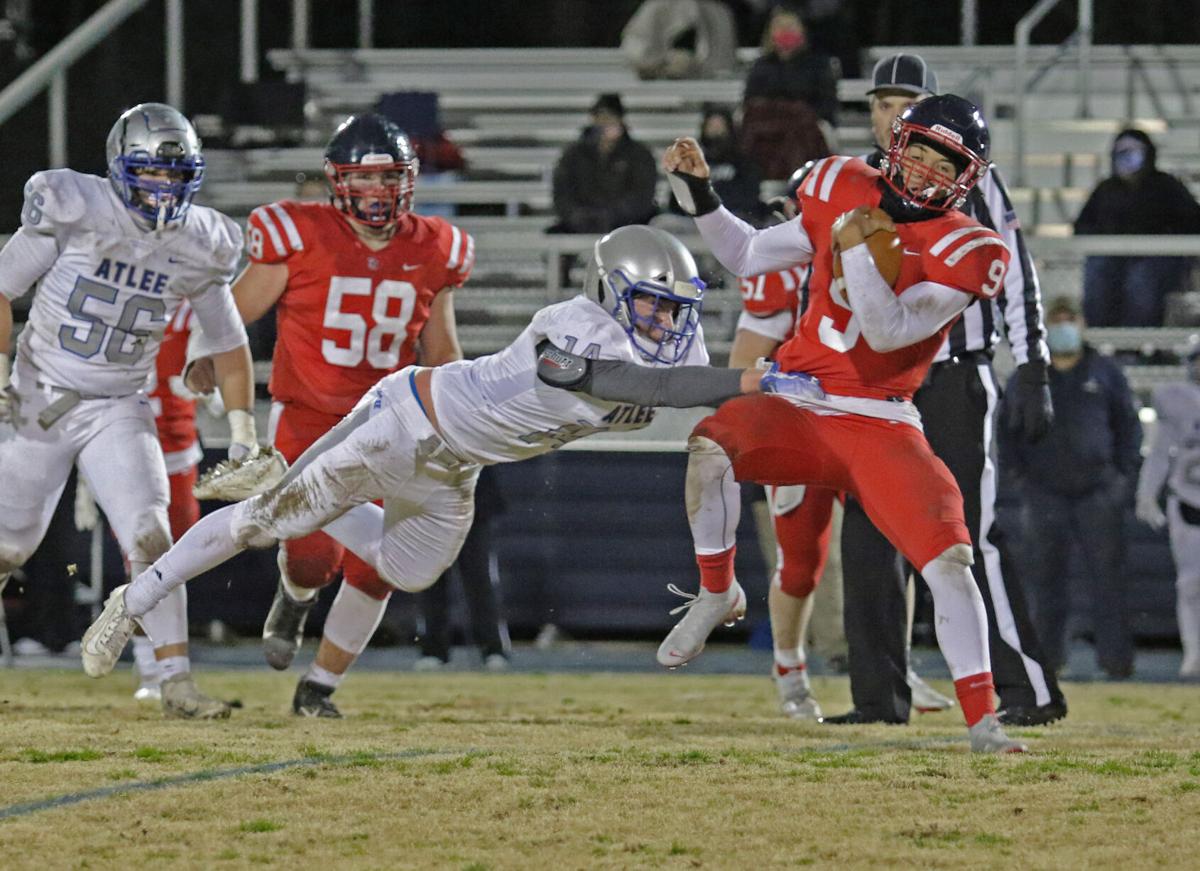 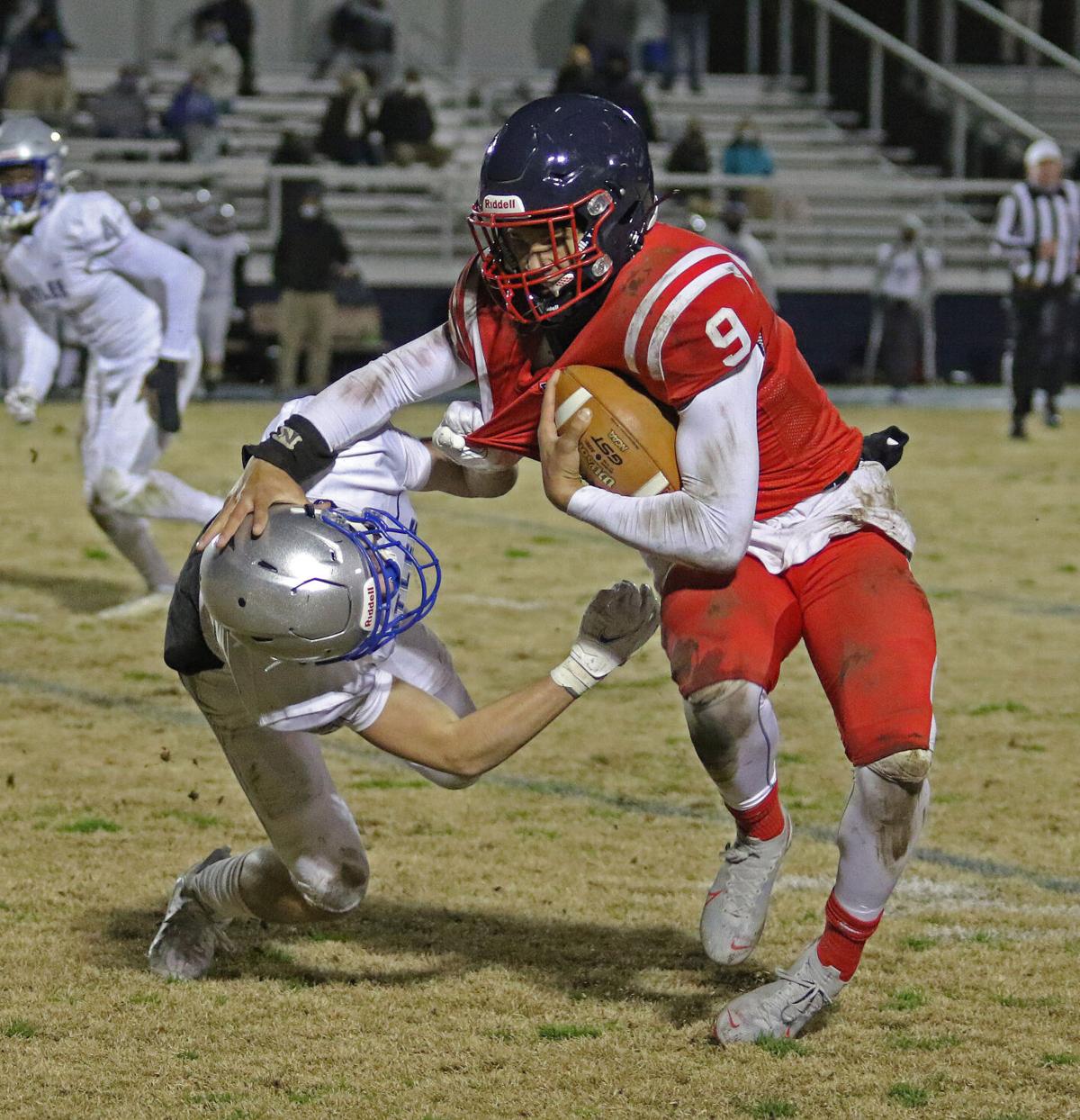 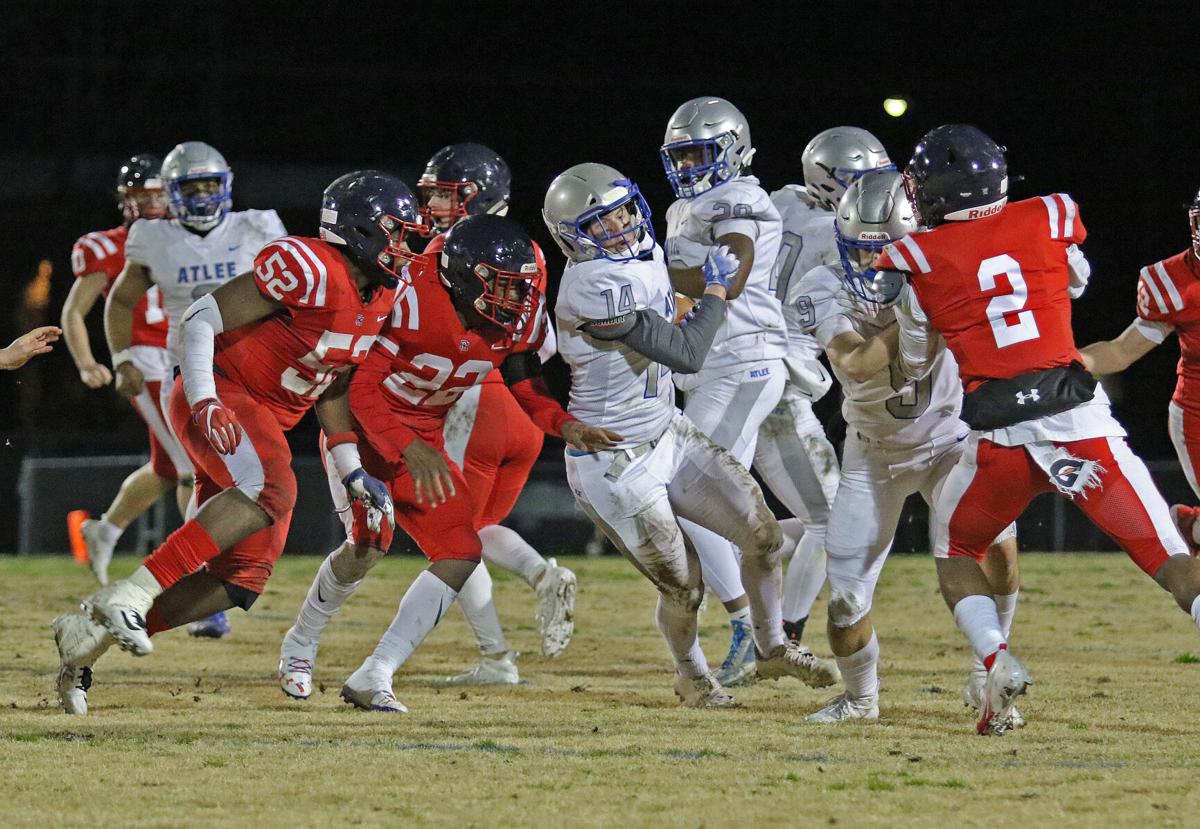 With running room at a premium, the smothering Patrick Henry defense clamps down on Atlee running back Tyler Garr in the Patriots' 28-6 win on Friday, March 19, 2021. 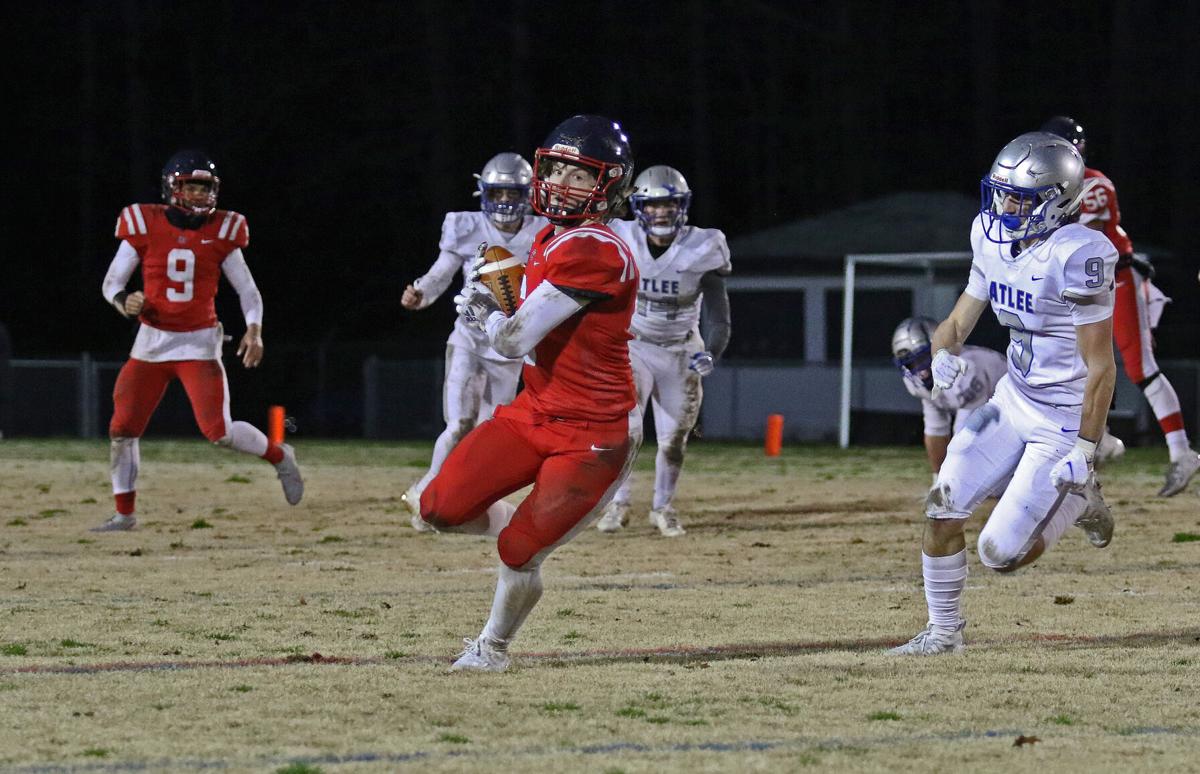 Patrick Henry wide receiver Nick Sikkar cradles the ball for a 30-yard reception in the Patriots' 28-6 victory over visiting Mechanicsville on Friday, March 19, 2021. Sikkar would tally 78 yards on four catches and& one touchdown.

By Rob Witham For the Mechanicsville Local

ASHLAND – A final score can be quite deceptive.

Patrick Henry’s 28-6 win over Atlee Friday night to sweep the Raiders in two meetings and move to 4-0 came in a game very much in doubt early in the fourth quarter.

A forced fumble by Atlee (1-3), recovered by Tyler Garr and returned 28 yards for a touchdown with 9:28 remaining cut a precarious Patriot lead to 12-6.

Enter Jordan Allen. The junior quarterback, who broke off a 56-yard run on the Patriots’ first play from scrimmage, found a hole up the middle, turned right, and raced 38 yards to the Atlee 35.

“I got all those yards and thought, it’s my time. Let’s go get it,” Allen said.

On the next play, Allen went left, gaining 18 yards. His next carry traveled 9 yards. On the fourth play of the drive, he patiently waited for two blocks to his left, then bolted for the pylon, breaking the plane of the goal line just ahead of an Atlee defender.

For good measure, Allen converted a 2-point conversion that made it 20-6 Patriots with 7:05 remaining.

In the blink of an eye he did it again.

James Valentine’s recovery of a Raider fumble on the first play of the ensuing possession set up Patrick Henry at the Atlee 9-yard line. Allen, who wears No. 9, looked left, cut up the middle, and scored his second 9-yard touchdown run in 15 seconds. He used the superior blocking of his offensive line to convert another 2-point try. Patrick Henry’s lead was secure.

Allen is quick to praise his young offensive line and to point out their journey this season.

“Two sophomores, three juniors. They’re growing,” Allen noted. “Three of them didn’t play much last year, so to see that drive in a big game – it’s win or go home at this point – that’s great for me.”

Allen had 14 carries for 152 yards with the two 9-yard scores and threw a 31-yard touchdown strike to Nick Sikkar late in the first half to build a 12-0 halftime lead. Camden Byrd scored on a 5-yard run on the Patriots’ first drive to open the scoring.

Patrick Henry continues to be in a group of four schools – with Monacan, King George and Louisa – that are unbeaten atop Region 4B. Lurking behind them are one-loss teams Eastern View, Powhatan, and the Patriots’ next opponent: Hanover.

“We know we need a great week. We know that it’s the one,” Allen explained when asked about their second meeting with the Hawks, who took the Patriots to the limit before falling 22-14 on March 5.

Head Coach Ken Wakefield knows Friday’s contest could be an elimination game when it comes to the postseason.

“One thing we tell our kids, you’re going to hit adversity,” Wakefield said. “You just don’t know when it’s going to come, and it’s how you respond to it.”

With running room at a premium, the smothering Patrick Henry defense clamps down on Atlee running back Tyler Garr in the Patriots' 28-6 win on Friday, March 19, 2021.

Patrick Henry wide receiver Nick Sikkar cradles the ball for a 30-yard reception in the Patriots' 28-6 victory over visiting Mechanicsville on Friday, March 19, 2021. Sikkar would tally 78 yards on four catches and& one touchdown.